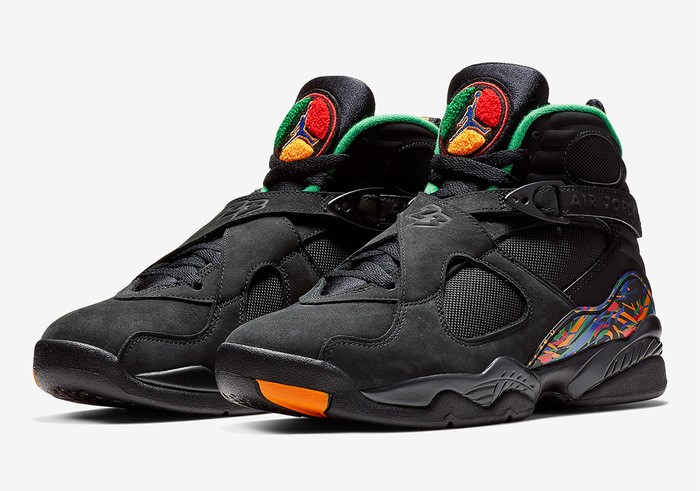 Initially released in 1993, the Air Jordan 8 was the first in the lineage of Jordan releases not to feature any Nike branding. Legendary Nike footwear designer Tinker Hatfield believed the Jordan brand was strong enough to stand on its own and after relentless convincing Nike finally agreed, allowing the release of the 8th Jordan iteration to feature stand-alone Jumpman branding.

Micheal Jordan donned the head-turning pair while playing for the Chicago Bulls during their 92-93 three-peat basketball season. A striking silhouette for the time, the Jordan 8 raised a lot of eyebrows on its initial release; the anti-inversion cross-straps – nicknamed bunny ears – were unlike anything that had been seen previously on a Jordan sneaker and the pair were imbued with plenty of Hatfield’s creative craftsmanship.

Continuing the colourful vintage styling, a plush green sock-liner offers a bold aesthetic, and the black heel pull tabs read “Live Together” in a contrasting shade of yellow.

The Air Jordan 8 ‘Air Raid’ will be available via the size? previews app and in selected size? stores on Saturday 22nd December, priced at £170.