Cream: more than a club

Our 2020 has been all about commemorating 20-years of size?; to celebrate, we have released a haul of collaborative projects throughout the year with some of our favourite brands. For our final collaboration of 2020, we have teamed up with adidas Originals and Cream to release a silhouette, tracksuit, t-shirt and hat, providing some much-needed 90's clubbing nostalgia.

adidas Originals and Cream are two brands synonymous with one another, regarding their undeniable importance to ravers, casuals and ‘90s culture. This size? Exclusive is certainly one of the standouts of the year, so we thought it’d be a great idea to give you a bit of a background on the club which defined Liverpool’s clubbing scene in the ‘90s and beyond.

Cream was founded in Liverpool during 1992 by James Barton, Andy Carroll and Darren Hughes, arriving slightly later during the acid house scene which had been prevalent in the UK since the second Summer of Love in 1988. Clubs such as The State and Quadrant Park were a couple of the go-to venues in the city, these attracted more of a local crowd though but were crucial for the bubbling underground dance scene in the city.

As DJ Paul Bleasdale described in an interview with La Vida Liverpool, clubs like The Hacienda were getting recognition around the country and globe even, so Cream was created to “put Liverpool on the map”. Obviously, the city had already produced music which put the city on the map, with The Beatles revolution plus Eric’s-born post-punk pioneers Echo and the Bunnymen and The Teardrop Explodes which were the beating heart of the late ‘70s/’80s scene. Cream was Liverpool’s opportunity to pioneer a new cultural phenomenon.

To begin with, Cream didn’t burst onto the scene, but with some arguably genius advertisement – driven by the creative spark of Darren Hughes – the club began to attract crowds. Eventually, Cream grew into something bigger than a local gem; coach loads of ravers from as far as Scotland would venture to the city and the nights also attracted hoards of students, football casuals, footballers, celebrities all under one roof in unison.

Our adidas Originals x Cream collection pays homage to the iconic club, taking influence from the brand’s key imagery. Each product is submerged in a rich creamy colourway which is archetypal to the brand, plus there are punches of bright colours influenced by the authentic posters and branding. Beneath are some examples from back in the day, showing some of the genius marketing which helped it stand out. 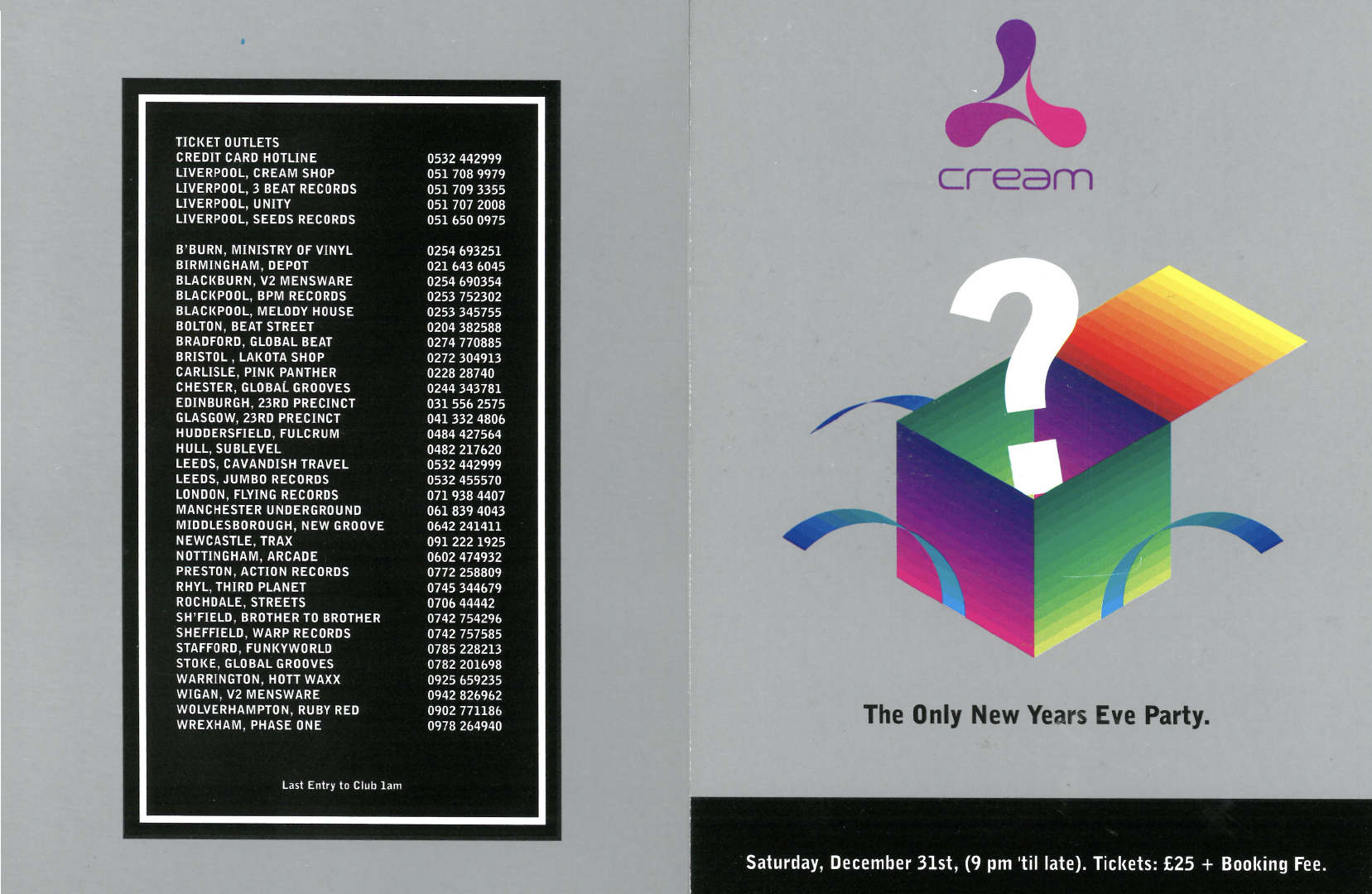 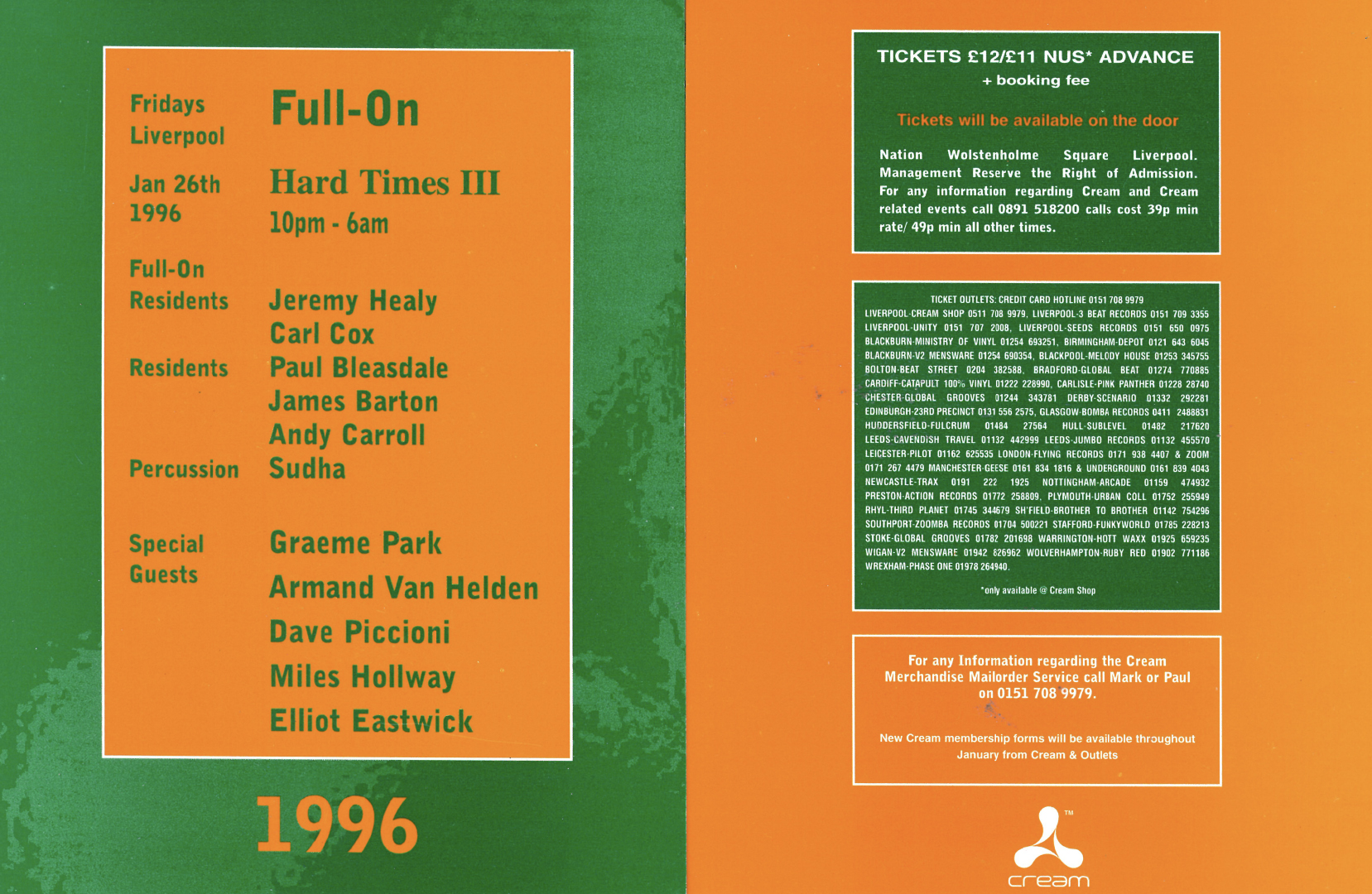 The club rode the wave of the rave scene evolving into the mainstream, hiring the likes of Paul Oakenfold as a resident in 1996 to further enhance the superstar status of the club. Other huge names such as The Chemical Brothers, Carl Cox and Pete Tong made appearances at the club.

As the club’s hyped naturally slowed down a bit, the brand sought after new ways to continue its legacy and thus, Creamfields was born. The first festival took place in 1998 in Winchester before moving back to Liverpool, then it eventually settled in Cheshire. This festival showed the brand’s ability to evolve into something bigger; starting off as a day event, it evolved into a camping festival, hosting 70,000 people a day, earning its title as one of the UK’s most established festivals.

Although the club closes its doors in 2002, as the owners wanted to concentrate on other ventures, the brand has lived on. Creamfields festival went on to host a plethora of one-off events across the globe, as well as hosting club nights in Ibiza’s legendary Amnesia. Also – to get that authentic Cream experience – the brand hosts Cream Classics tours, for all your nostalgic ‘90s clubbing needs.