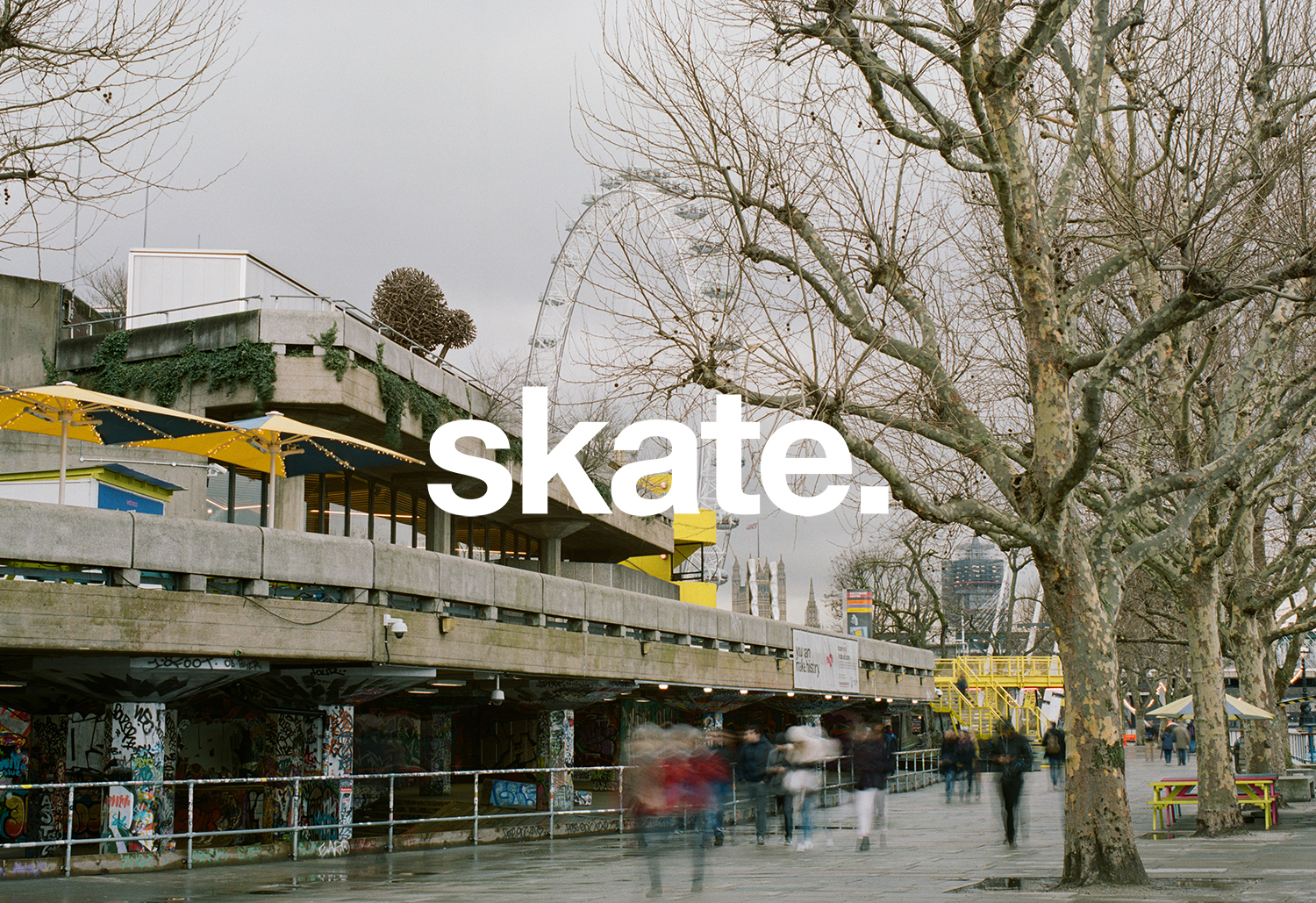 Since the 1970’s, Skateboarding has found a home within the UK after crossing the water from America, sitting amongst our own myriad of subcultures. Be it at skateparks, halfway up multi-storey carparks or under motorway bridges; find a place with smooth surfaces, rails and ledges, and it’s more than likely you’ll hear the snapping of plywood on concrete.

Skateboarders have always had a way of being able to find the beauty within the overlooked. Brutalist concrete goliaths are dismissed by the many as ugly hard-edged structures, making way for a new wave of contemporary architectural designs in recent years. Yet skaters have managed to use their solid structured designs to their advantages. Concrete spots all over the UK have become breeding grounds for skating, Urbis in Manchester and London's Queen Elizabeth Hall to name a few.

Fast-forward to 2018 and it’s continued to be adopted by more of a mainstream crowd. Converse, a brand synonymous with skateboarding since the original Chuck Taylor, have their regular collaboration with US rapper and skate-rat, Tyler the Creator. Their Converse x Golf Le Fleur* capsule collection readily drops seasonal skate-ready apparel such as premium updates to classic Chuck Taylor and One Star styles as well as luxury apparel.

The form skate footwear has taken over the years has moved in waves, with designers also pulling in influence and direction from what’s going on outside of their own industry. The 80’s carried over Vulcanised styles like the Vans Authentic and Slip-on from the previous decade, and from here on in things slowly began to get thicker, allowing for more protection for your feet. It was also around this time that shoes outside of skateboarding began to find themselves adopted. Icons like the Superstar, Campus, Air Jordan 1 and Blazer all found a use because of their hardwearing materials and added ankle support due to their height. For those who disagree with these brands being ‘involved’ within skateboarding, it’s hard to deny these brand’s relevance when skateboarders themselves were choosing them over core brands, and when Issue 1 of Thrasher Magazine (the unofficial bible) from 1981 has a Nike Blazer illustrated on its cover…

Moving into the ’90s and early 2000s, and technical developments were continuing to be added to shoes yearly, with SoleTech sitting at the forefront with éS, Etnies, and Emerica. Each brand catered to a different style of skateboarder, and featured their own protective details. éS sat amongst the more technical flip-in-flip-out, ‘hip-hop influenced’ street skater, Emerica was more for the hesh crowd with minimal vulcanised shapes, and Etnies acted as a good balance between the two, incorporating aspects it’s siblings. Shoes like the éS Scheme, DC Shoes Legacy and Etnies LoCut sold incredible amounts throughout the noughties; it was surprising how some shoes were able to be skated in due to their overwhelming size!

From 2010 onwards, things started to be stripped back again. Developments had meant a lot of the technologies previously slapped to the outside of the shoe were now hidden underneath thinner, with more protective suede panels. Cushioning began incorporating new and innovative methods within the midsole unit in a cleaner manner. Vulcanised shoes like the Nike SB Stefan Janoski took the market by storm, and continue to stay relevant nearly 10 years later.

In the same vein, dependent on the music you listened to, the skateboarders you were interested in and the mags you read, a skateboarders style varied from city to city. Original éS Pro Tom Penny became somewhat of a style icon throughout 00’s, known for his recognisable, crazily oversized denim, hoodies, and a beanie that perched just enough over his eyebrows so he could pinpoint his signature frontside flips. On the other side of the coin, pool skaters and the more ‘hesh’ influenced crowd wore things a bit tighter and more outlandish, think Ali Boulala circa the Flip ‘Sorry’ video era.

We've pulled together our selection of tees, trousers and jackets, that pull together styles similar to those you might have found around the late 90’s to mid 00’s era, including  adidas, Obey, Carhartt WIP, Dickies and plenty more.