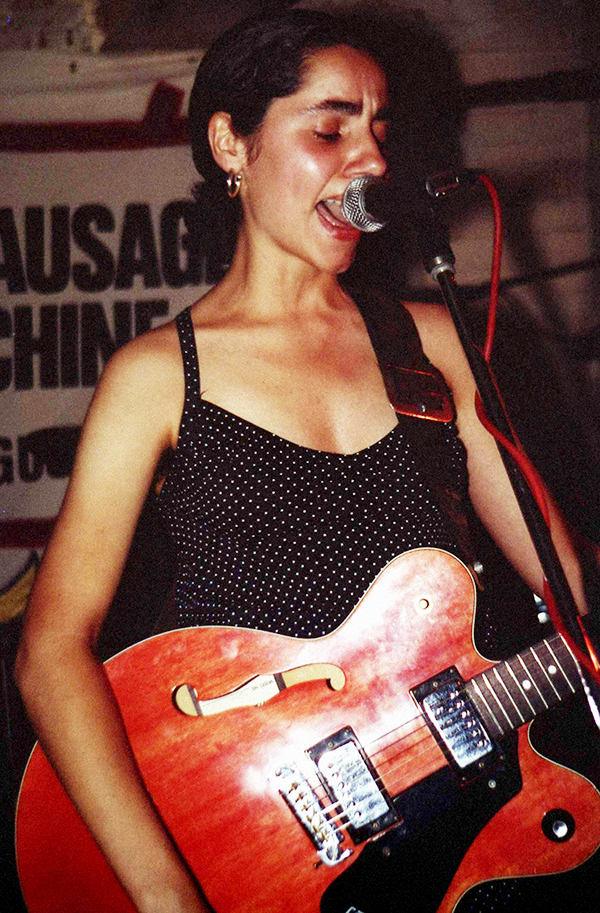 Untypical Girls were the radical transatlantic guitar-wielding indie women who freed themselves from mediocrity and helped spark feminism’s third wave.  Pop-culture archivist Sam Knee collates a hotchpotch of images direct from the women who created post-punk. In the male-dominated music industry of the late 70s and 80s women had to shout to be heard, but the liberating force of punk’s initial blast set a seismic change in motion. In 1976 punk rock was born, and for the first time young women musicians seized hold of their own destinies. The Slits When the Slits appeared in 1976 they truly were a revolutionary bolt from the future. These were four teenage girls throwing down the shackles and breaking free. Declaring everything preceding them to be boring and irrelevant, their sheer fearlessness and youthful belligerence spoke volumes to young women everywhere. Coming across like a sonic street gang, these unashamed absolute beginners were an organised mess of dressed up undress. Their image effortlessly exuded Ramoniac leather girl rocker with London punk street urchin brashness. “If men don't like us to be free…” guitarist Palmolive told an NME journalist in 77 “…they can fuck off.” The Slits didn’t merely open doors for young women in music. They blew them off their hinges. 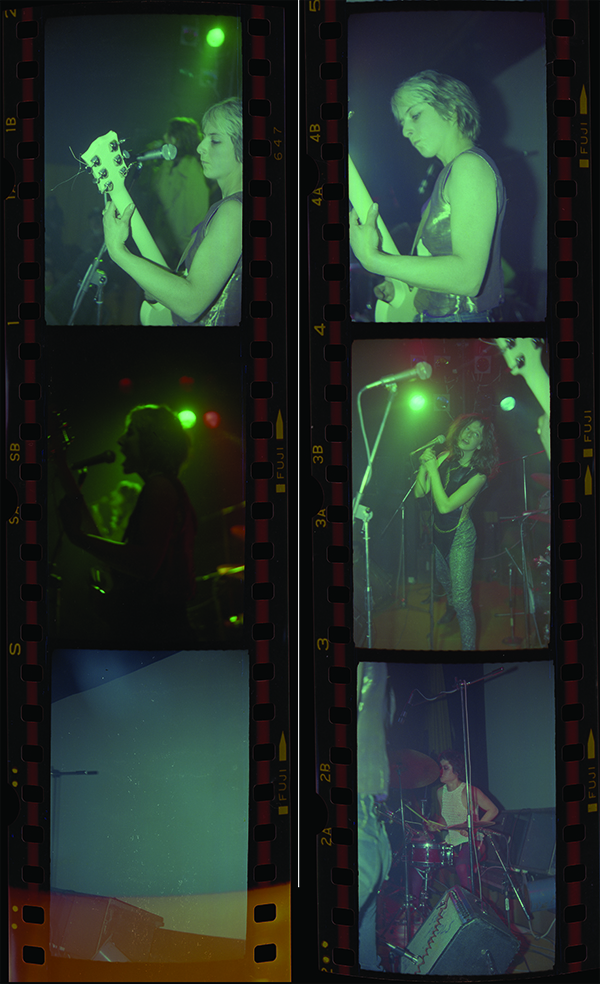 The Raincoats The Raincoats formed after members of the group saw the Slits live and decided to take their 'anyone can do it' ethos to new levels. The image and sound they encapsulated defined the post-punk era more than any other single band. Fusing freeform art school experimentalism with a lo-fi DIY punk rock approach, their music was outrageously amateur and bravely avant garde. The Raincoats’ sound voyages into unknown sonic territories — and sartorially they were a dishevelled mixed bag. The look was bohemian art student — like the aftermath of a ram-raid in a charity shop. There wore old trench coats, school v necks, monkey boots and grandad-style pleated trousers. The post punk androgyny of the Raincoats defined the look of indie rock well into the 1980s. Their style was haphazard, considerably unconsidered – archetypically anti-fashion. 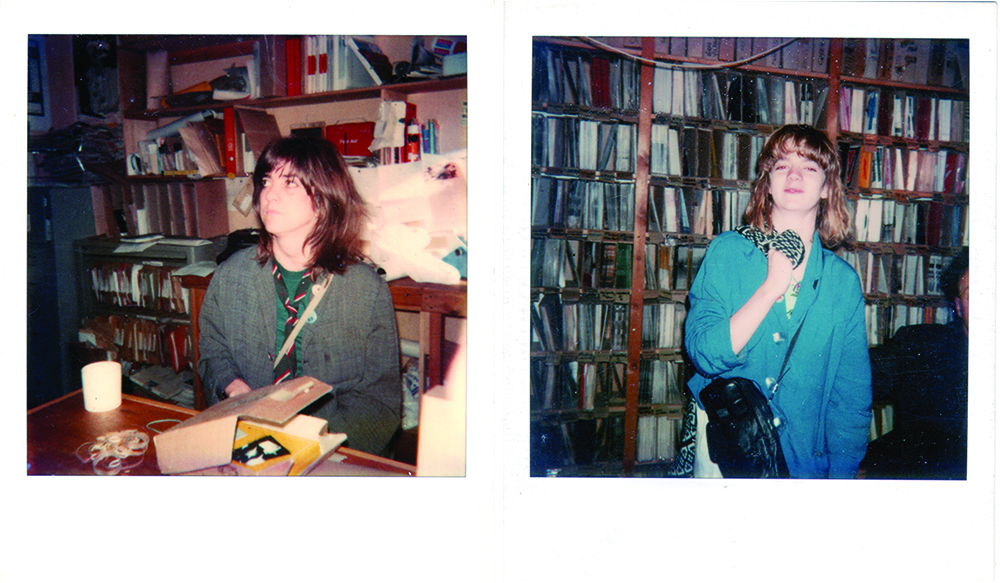 Marine Girls   Meanwhile in suburban Hertfordshire, the Marine Girls had begun to noodle on their instruments. This gaggle of arty sixth formers who'd fallen under the beguiling spell of the lo-fi post-punk scene included teenage vocalist Tracey Thorn, who would go on to perform in soulful eighties art crooner outfit Everything But the Girl. The Marine Girls’ songs were condensed soap opera episodes, which evoked kitchen sink-era angst with a breezy sort of English whimsy. Beach Party, their debut LP, remains an endearing post-punk classic - sounding exactly as it is - the bedroom-recorded ramblings of kids who hardly knew how to play their guitars. The record is cited by Kurt Cobain as one of his all time fave LPs and is to this day revered by hardcore Nirvana aficionados. Their fashion styles were courtesy of their mums’ wardrobes and local village hall jumble sales. Think patterned dresses paired with anoraks and duffle bags. 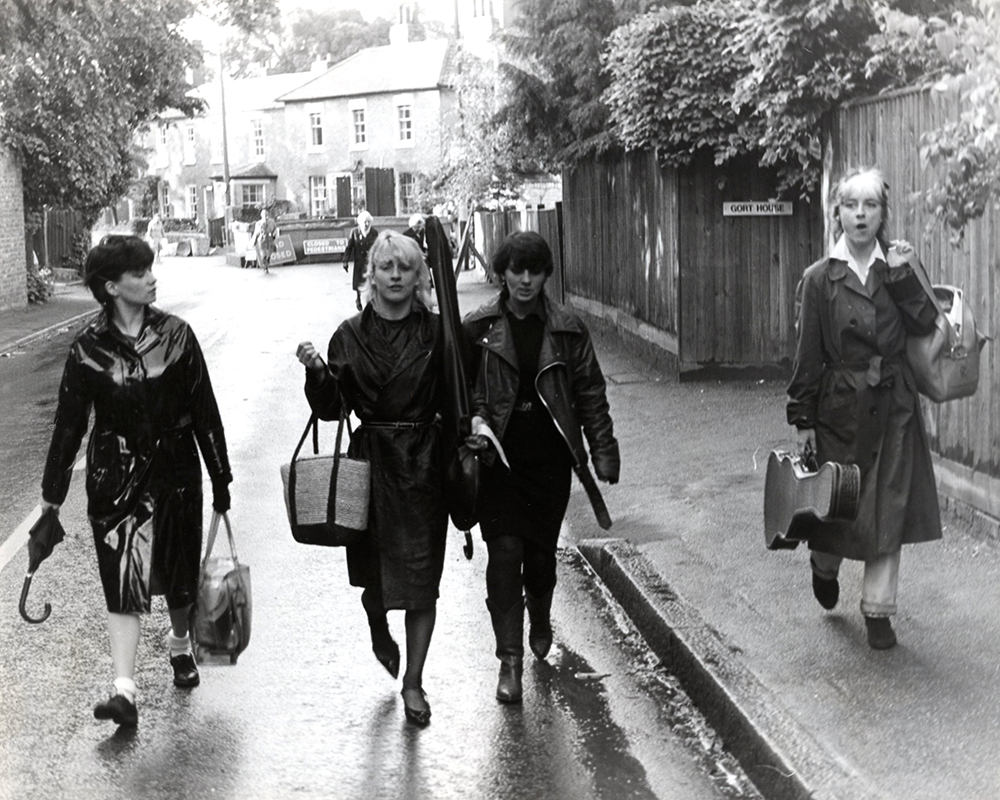 Kim Gordon When New York rock group Sonic Youth descended on British shores in 1985 they captured the aesthetic and sonic zeitgeist. And front woman Kim Gordon inspired a generation of girls to exude art punk on their own terms. The Sonic’s twisted No-Wave sound was dark and nihilistic - and it tuned perfectly into the detachment and alienation that was the lens through which a good proportion of UK youth were viewing the world. Kim emanated the boho cool of the clued up Lower East Side and soon became an underground fashion icon. Kim’s lank blonde locks and eyeliner defined the look of edgy arty chicks everywhere. 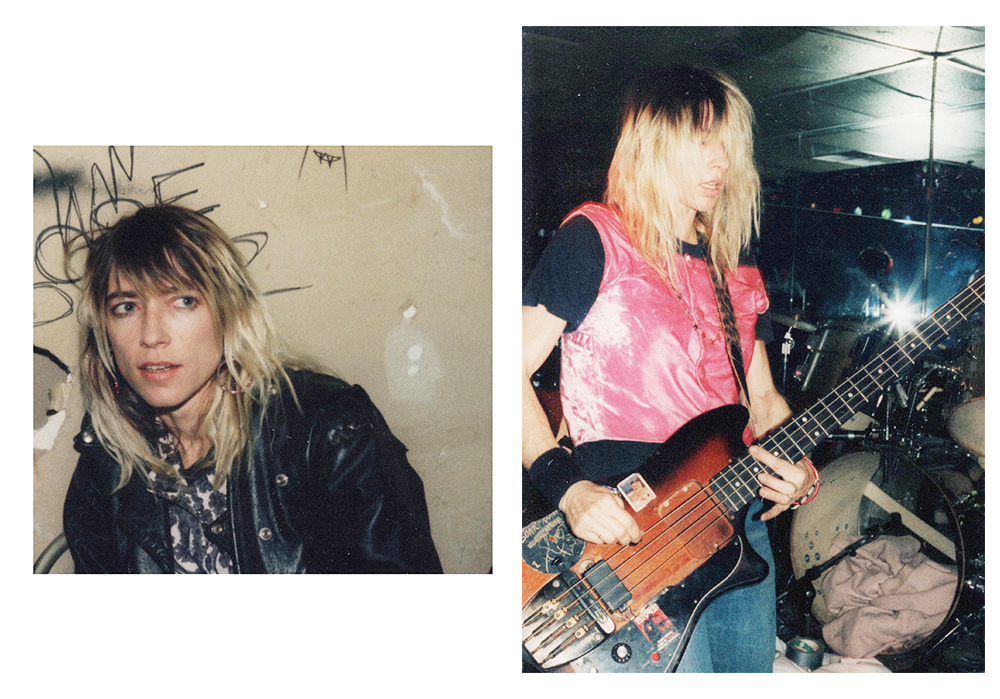 Julie Cafritz Washington DC's Pussy Galore exploded onto the scene in 1985 in a frenzy of ear bleeding garage art punk noise. They made most of their peers sound overnight about as threatening as the Carpenters. Guitarist Julie Cafritz was at the centre of the noisy maul, reeking of bad-ass attitude. Cafritz remains the most resonant memory of Pussy Galore’s noise. She adopted an unapologetic rock chick style and embodied the give-no-fuck attitude of the era that inspired girls all over the world. 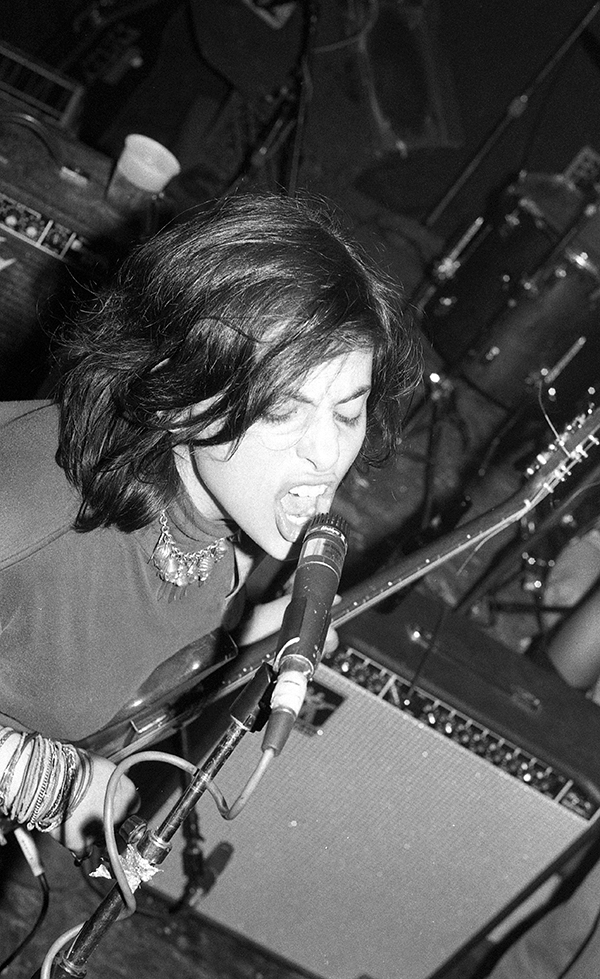 Bilinda Butcher  Bilinda joined My Bloody Valentine in 1987 as the group left their fuzzy ‘Jesus and Mary Chain via the Monkees' sound behind and set the controls for the sun as the psyche infused ‘Shoegaze' era dawned. MBV’s sound became increasingly symphonic through to 1988, when noise levels pushed small club PAs up to eleven and wrecked many an eardrum. On one occasion in a small north London venue, people in the crowd threw up, passed out and exiting the room as the building was levelled to dust by MBV's overwhelming din. The experience was like being next to a jumbo jet taking off in your bedroom. Bilinda’s ethereal vocals were meanwhile barely audible through the giant waves of distortion. Bilinda became the Shoegaze girl style icon. She was cool, reserved and nonchalant. 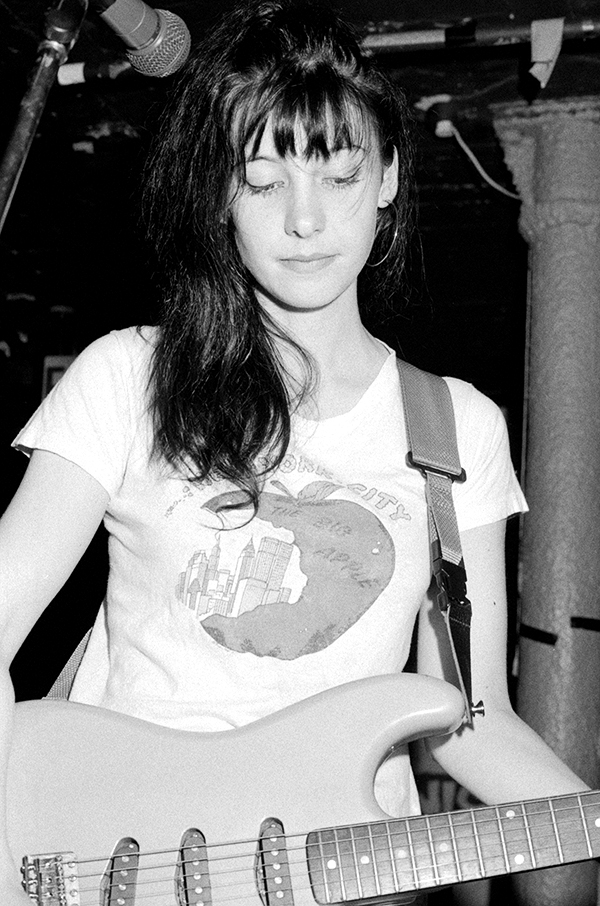 Kathleen Hanna Bikini Kill were the absolute figureheads at the vanguard of the Riot Grrrl explosion. An amalgamation of all female infused scenes preceding, the Washington state-formed band focused all the pent up frustration and anger of inequality and marginalisation into a riot of noise. They chucked post punk, garage punk, and C86 through a blender, creating and articulating something altogether new. Kathleen at the mike and her crew showed just how powerful music could be. Attempting to move mountains through three chords, Bikini Kill combined Americana's halcyon days with post-punk street suss. And they wore twinset cardies, moddish hairdos, librarian style spex and tatty brothel creepers. Doc Martens and schoolgirl skirts were de rigueur amongst the riot girls. This was punk’s conclusive chapter. 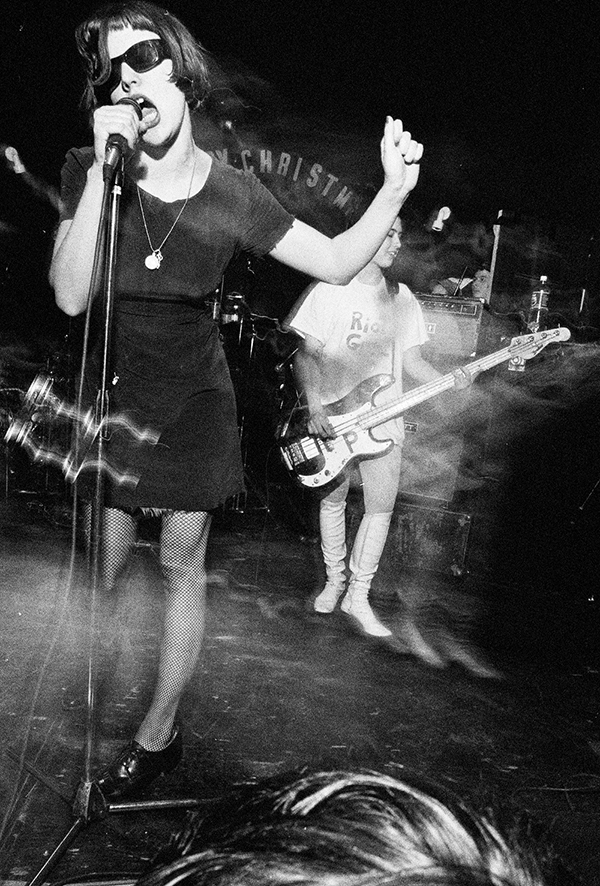