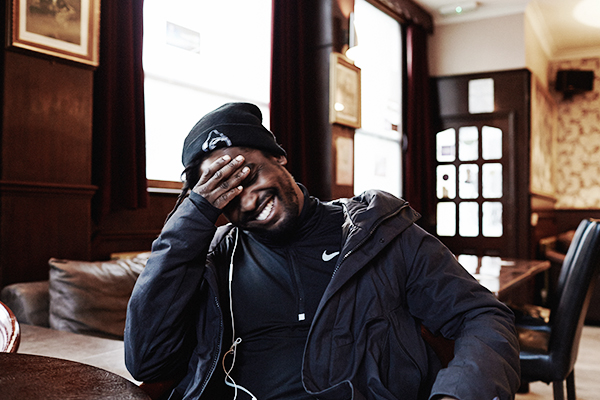 They used to call it Millwall. Then they called it Docklands. It always was the Isle of Dogs but the estate agents and posh developers don’t dig that moniker. For one singer songwriter from Dog Island this corner of East London simply fuels the fire...

Hak Baker is 27-years-old and makes beautiful, sad, textured music. His songs  are simple stories, pen portaits of friends, family and feelings. You grow up with Hak and his mates, you get wasted, you fuck off your boss, you sit around at 7AM smoking, hoping everything will be alright.

As a school kid Hak was part of the B.O.M.B Squad – a local collective at the heart of East London’s grime renaissance. After that there was a little time at Her Majesty’s Pleasure. Inside, Hak took some guitar lessons. Since then his no bullshit lyrical approach has seen him bubbling in the shadows of the limelight. Resolutely, instinctively independent and sceptical about the trappings of success, there’s an endearing sensitivity to the man - laced with a world weariness that’s quick to dissolve into laughter despite it all. We met Hak Baker at the start of his first UK tour.

On growing up on The Isle of Dogs

The Island is a weird place. Me and my mates built our own little world there and we’re still living it. It was a mixed community. I guess I was kind of sheltered before I went to secondary school. But then I started going to the youth club and I saw all these outrageous things. We were egging people, nicking dumper trucks and cranes from building sites, ramming down fences and all sorts. I used to like singing at home with my mum. On the weekends my mum would be cooking soup with Vibes FM on the radio and I’d sing along. I got roots from my dad, who was a sound man on the Luton Carnival. A lot of the music that’s around now can be traced back to soundsystem culture and even the African boys are using Jamaican flow now; the lyrics, the bass and drum. My mum’s old skool Jamaican. She tricked me into being in a choir and all of a sudden I’m a chorister in this cathedral. It was cool but I wanted to get out of there because all my mates were going to raves and I couldn’t go because I had to go to choir practice. So I pretended my voice had broken and got out of there. My mum was working night shifts and so we would just go out. If she said no then we would just sneak out anyway. Then she’d lock us out and I got kicked out of school and she was finding all kinds of shit in the house and I was just letting her down. I was too unruly. 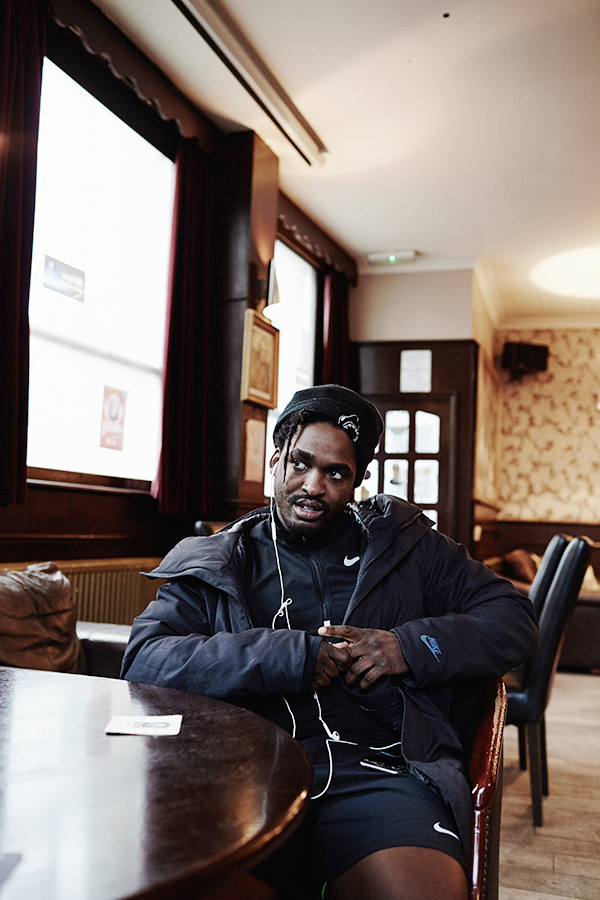 On the early days of grime and getting into trouble

It wasn’t even called grime back then. We didn’t even have a name for it. We just used to emcee. No one wanted to tame it and put a name on it. Then YouTube came out and it was possible to put these shit videos on telly. The youth club funded our video and everyone loved it. We did a few shit shows and that was it. Old school boys like me who grew up with grime, really doing it, like just spitting in the streets and in the youth clubs, they don’t do that shit now. It’s all for the camera. It wasn’t like that before. It was just for love. Now they’re all just chasing the penny. They’re thinking, ‘My man’s doing it so I can do it, I can chase the penny.’  Back then I was just living in a flat full of my mates and we were just surviving. We were just having a laugh getting smashed. We were all just trying to survive and trying to have a good time. No one even cared about anything but money and birds and pretending to be happy. I was just on the roads out there making money trying to survive. My mouth got me in trouble. I was a mouthy little bastard. I was just hustling out there doing things trying to keep up. It’s hard out there, dog eat dog. You got to stay fit, you got to stay fresh, if you want to go out and go raving and if you want to buy the Champagne!

On guitar lessons and folk influences

When I was inside the Governer came on the wing one day and said they were giving guitar lessons. So I put my name in the hat and when they pulled it out, my name was on the ticket. Simple as that. The geezer came in for a couple of sessions and it went from there. The music I was listening to just led me to use the guitar. It just came out naturally. Me and my brother used to always listen to guitar music and rock. I came out of jail and met this girl and she introduced me to a band called Daughter. That was the first tune I really learned how to play, a Daughter tune called Youth. That was the style of tune I started to play. It just seems to flow naturally. I used to listen to a lot of Bob and Damian Marley. But I like Terry Callier, Fleetwood Mac - a lot of different things. Just being honest, and liking lots of different things gets you a lot of hate. A lot of my mates were like too intent on being in a gang and shit. I was hanging out with the older boys, and they taking me out to raves at the age of 14 or 15. We might have a fight at the end of the night, but throughout the night we’re having a right fucking laugh. Never had so much fun in my life. Some of my tunes might sound as if everything is dread but it’s not really like that. If anything I’ve had too much fun. 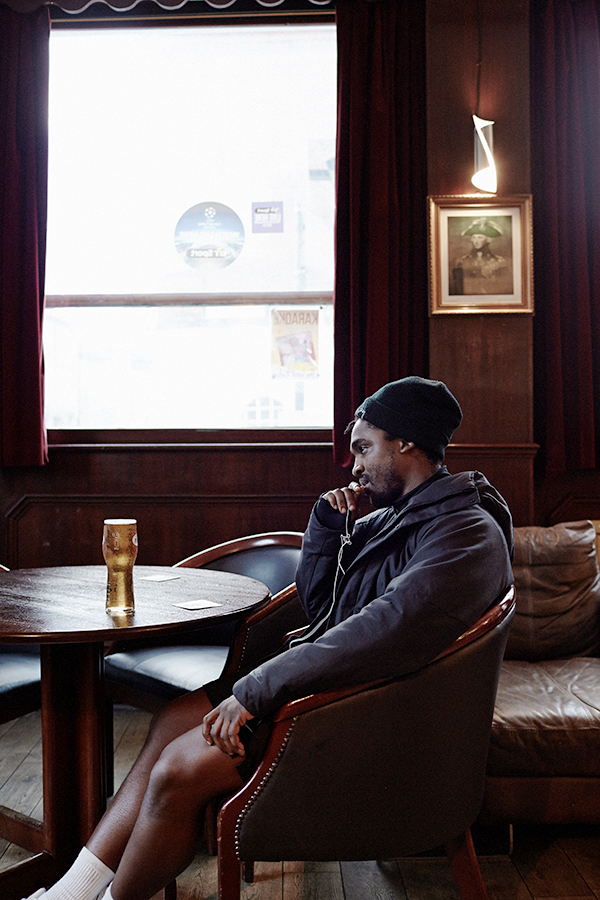 On surviving in London

I don’t want to have to get involved in the industry. But it’s hard to survive, to pay rent and be creative. And it’s only getting worse out there. Houses are getting more and more expensive and lads have got to move out, or lads have got to do crime. Lads ain’t got a job, they can’t get a job. And they don’t want to get jobs. They feel misfitted. There’s a divide and rule thing going on and there has been for ages. It’s a massive thing to move out of your home and to find somewhere new to live. It’s too big for most people. They don’t want us to stay where we are. They are moving all these rich people in from everywhere, building all these huge buildings. They don’t like it when we walk into the restaurant in a tracksuit. They are trying to pretend that London is something that it ain’t. Togetherness is the way forward. Togetherness and probably fighting. They can’t lock us all up can they?

On tragedies and the healing power of music

Tom is a tune dedicated to my mate who died in a bike accident. He was one of my best friends. I didn’t get to say goodbye to him because I was in jail, and we weren’t talking when I went in. Making a tune like this is definitely catharsis for me, but it’s not good enough and I don’t think I’ll ever be alright with it. I think we’re in a place where it’s pretty fucked up at the moment. I don’t really see much light at the end of the tunnel. Not before war. Everyone is aware of how fucked up things are. Lads have got a clue now. I think it has to get to a point where things have to change. People have to be so tough these days. I’d like people to take away from my music the fact that sometimes it’s alright to be a bit vulnerable and sad. It must be tiring to keep up the man thing. We spend too much time in the past and too much time worrying about the future. We’ve got to crack on and live in the present. You’ve just got to enjoy yourself, be with the people you care about and have a good time. Music can heal. It can cleanse the soul. I think it can effect change. Bringing people together with music and beer, man. That’s what it’s all about. Life is dark and light and so is the music. You can experience both of those sort of emotions at the same time and you figure things out

“I’d like people to take away from my music the fact that sometimes it’s alright to be a bit vulnerable and sad.”