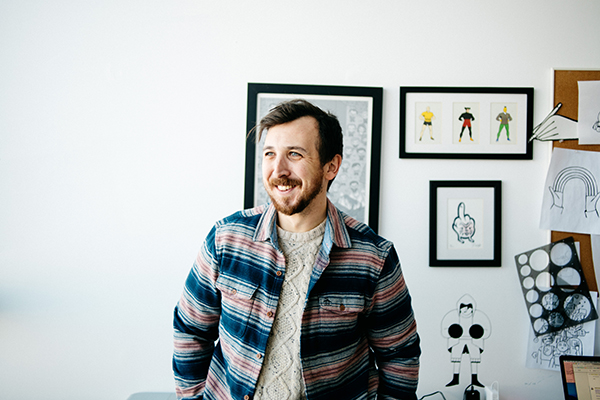 Continuing the cross-continent theme, the next artist we're featuring is the award winning Chris DeLorenzo. Chris is an illustrator and designer based and working out of his creative studio in Boston, Massachusetts, USA. DeLorenzo works across a range of styles, creating imagery for editorial illustration, branding development, advertisements, murals and Fashion branding. DeLorenzo's style has been described as simple and bold, creating stylish monochrome illustrations with a contemporary feel. Chris has also had his work endorsed, winning awards that include a Clio, an Andy and a Communication Arts Award of Excellence. His selected clients include communication powerhouse Google, Converse as well as Sony, GQ, Powerade and The New York Times. Chris has re-imagined our question mark in his signature style, manipulating shapes to create ideas that are hidden in plain sight. DeLorenzo has constructed a question mark out of a skateboarder jumping over a bin. Hi Chris, could you tell us a bit about yourself and your introduction to illustration? I'm an illustrator in Boston, Massachusetts. I like to hike, find birds, play guitar, play with my Pug, read and draw. For about 2 years now I've been running my own studio where I'm creating illustrations for editorial assignments, murals, branding, advertisements and animations, and the occasional logo. I had dreams of being a hip, self-important art director at an advertisement agency who won awards and crossed their arms in photoshoots. As it got to be more about talking about and pitching ideas rather than making them I felt a pull to leave the industry. I got a job at a t-shirt company where I designed graphics for about 6 years. I was an illustrator, designer and art director in one role. This is where I crafted my skills and was able to find my voice in illustration. Could you describe your studio? What's the most unique/beloved item in your space? I work in an artist community where everybody has their own offices, but a common lobby where we host events and art shows. I've got a massive window in my office and I never have to turn on the lights because the sun just pours in unobstructed all day. A unique piece in my office is a personalised hand lettered envelope from SF based typographer Erik Marinovich.  I was lucky to receive one of these from Erik a couple years ago and it's a great reminder that functional can be beautiful. My other most important piece in my studio is my light box. You used to host your own podcast - who was your most interesting guest and why? It was a great experience and excuse to go out and interview people we admire and create artwork for them. All the guests were equally amazing, but I really enjoyed interviewing a local bartender here in Boston named Tyler Wang. We wanted to find creativity in all kinds of professions and he had a great story and approach to his work. Are there 3 artists that have had an inspiring influence on your career? My all time favourite artist is Milton Glaser, he has the exact career and impact that I wish to have with my work. He was the one that opened my brain up to the idea that an illustrator can be a designer and vice versa. Another one is Saul Steinberg. He taught me that a drawn line can be an object and subject in itself. The third would be Bob Dylan, I know he's not a visual artist but his ability to grow and abandon old ways and move in new directions has always been inspiring to me. Could you tell us about the illustration you've presented for size? series? What was it about our icon that interested you the most? I'm always looking for a way that we can look at something in a different way that we can look at something in a different way, so when working with the question mark shape I tried to find a way to make it part of the image, almost camouflaged within the scene so when you notice it you might not look at someone allying over a trashcan the same way again. 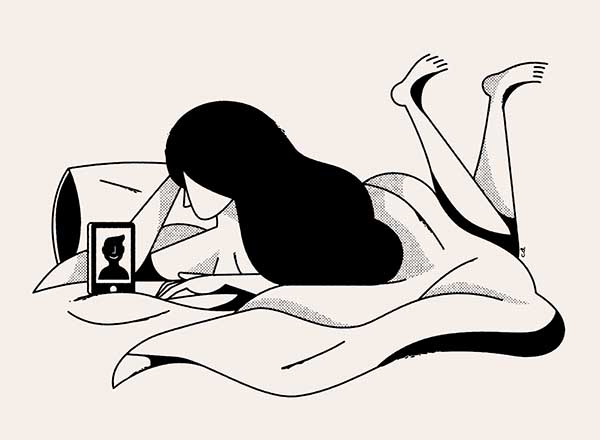 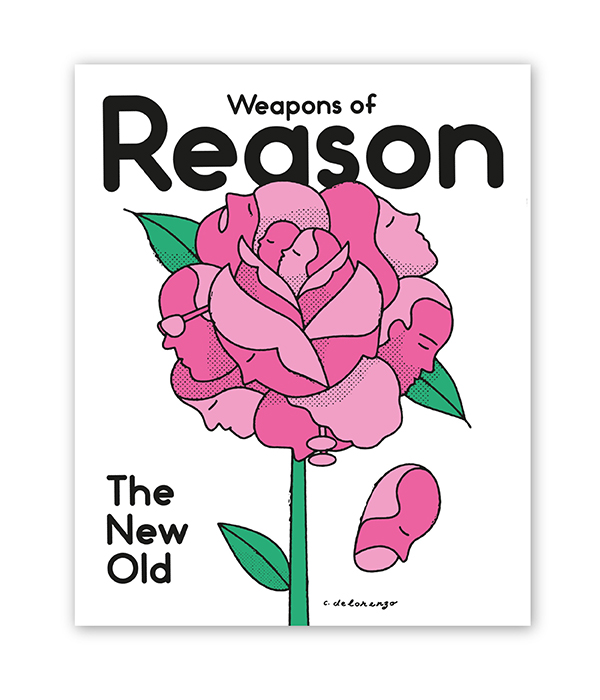 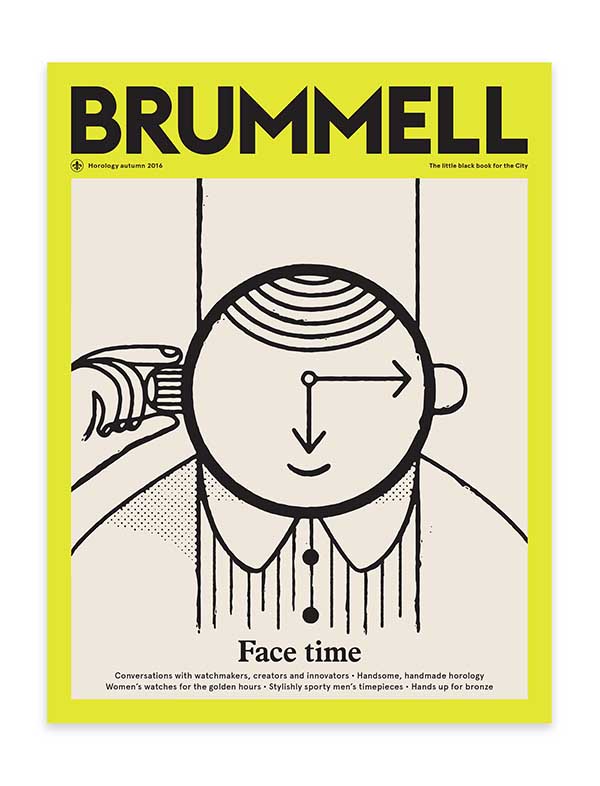 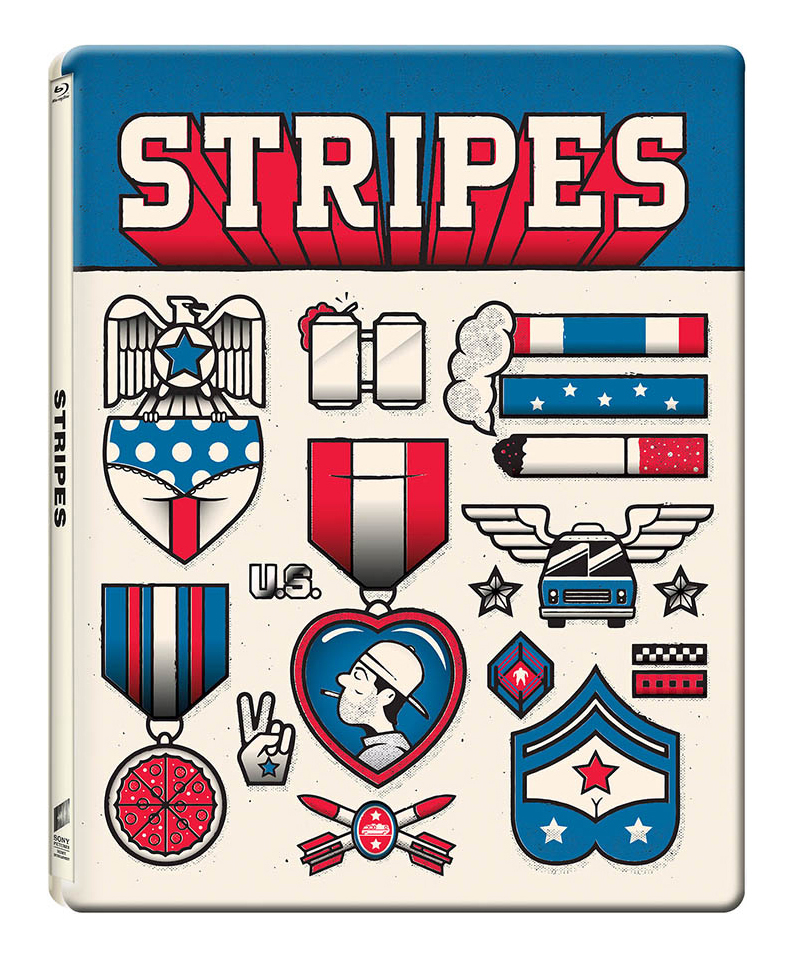