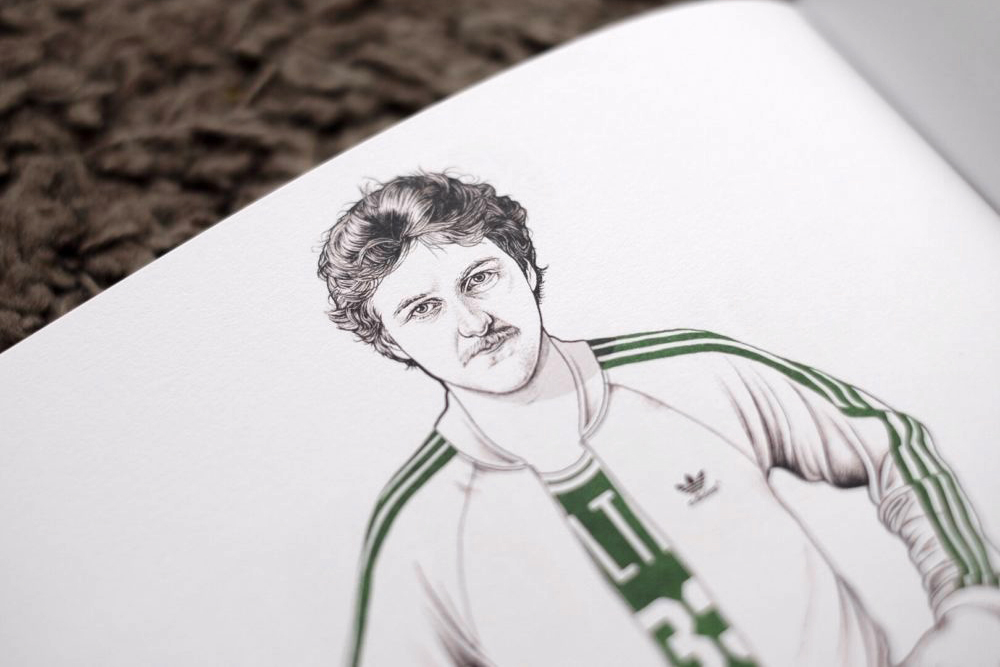 For more than half a century the giants of the NBA have left a huge imprint on basketball, on the culture of sport and on society at large. Often with personalities and appetites as big as their talents, men such as Wilt Chamberlain and LeBron James have transcended popular culture by mixing slam dunks with showbiz, earning a fame as wide as any Hollywood star — and influencing the culture of streetwear and, of course, sneakers, in the process. The greatest of these superhumans forced a change of approach on the court, their talents requiring opponents to think again or be left behind. From the relentless scoring of Kareem Abdul-Jabbar to the dexterity of Larry Bird to the brutal domination of Shaquille O’Neal, the evolution of hoops goes on. Above all, the best of the best had style. On and off the court, fans watched what they did, noted what they wore and wanted to walk in their shoes. The coolest thing? They could walk in their shoes. Just by picking a pair a few sizes smaller. 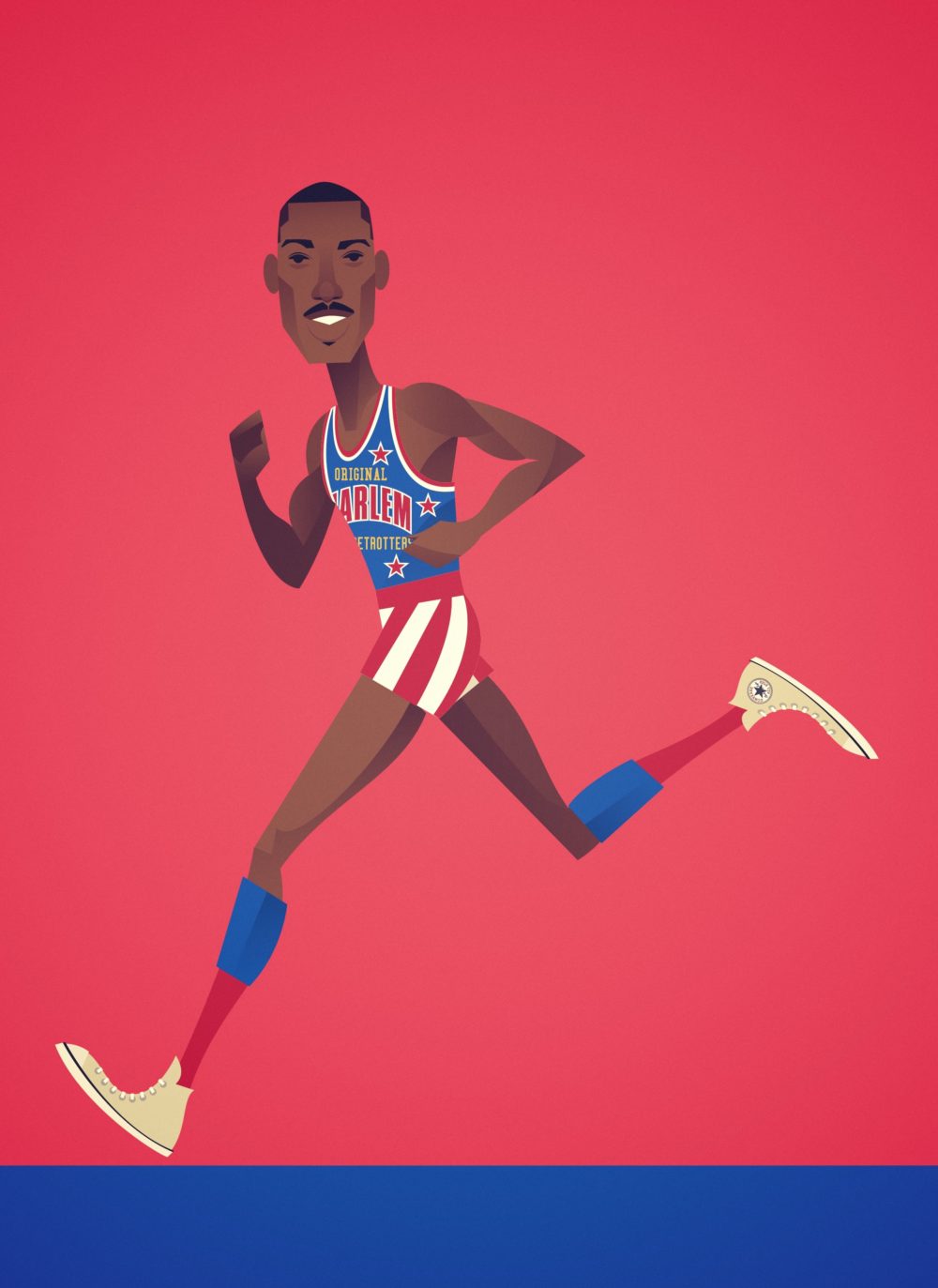 Wilt Chamberlain March 2, 1962. America’s chocolate capital, Hershey, Pennsylvania. The crowd screams: “Give it to Wilt.” The centre for the Philadelphia Warriors — already the NBA’s scorer supreme — racks up one basket after another until, with 46 seconds left, he drops in the ball to cut a piece of history that is still unsurpassed. 100 points. In a single game. A freakish 2.16m centre, Chamberlain had dazzled at the outset of his professional career when he featured for the Harlem Globetrotters but this was a trick no one had ever performed. “It was almost like a circus out there,” he said. With ‘Wilt The Stilt’ as the ringmaster. If that was his finest hour, then there were plenty more moments of glory. Twice an NBA champion, firstly with the Philadelphia 76ers and later with the Los Angeles Lakers, he was the league’s Most Valuable Player four times and an All Star 13 times. All power, all strength, all over the court, Chamberlain was basketball’s A-List celebrity of the 1960s. Sure, he picked up fewer titles than his great rival, Bill Russell of the all-conquering Boston Celtics. But, in his all-white Converse Chuck Taylor shoes, he was the Greatest Show on Hardwood with dominant dunks and pulverising point-tallies that made him the only man ever to average 50 over a single season. After retiring at the age of 37, Chamberlain took on a variety of roles. He became president of the International Volleyball Association, produced films and even went toe-to-toe with Arnold Schwarzenegger as the evil villain Bombaata in the movie Conan the Destroyer. Plus he hosted infamously wild parties at his Hollywood mansion, leading to claims he’d bedded around 20,000 women. When it came to scoring big, Chamberlain bowed to no one. 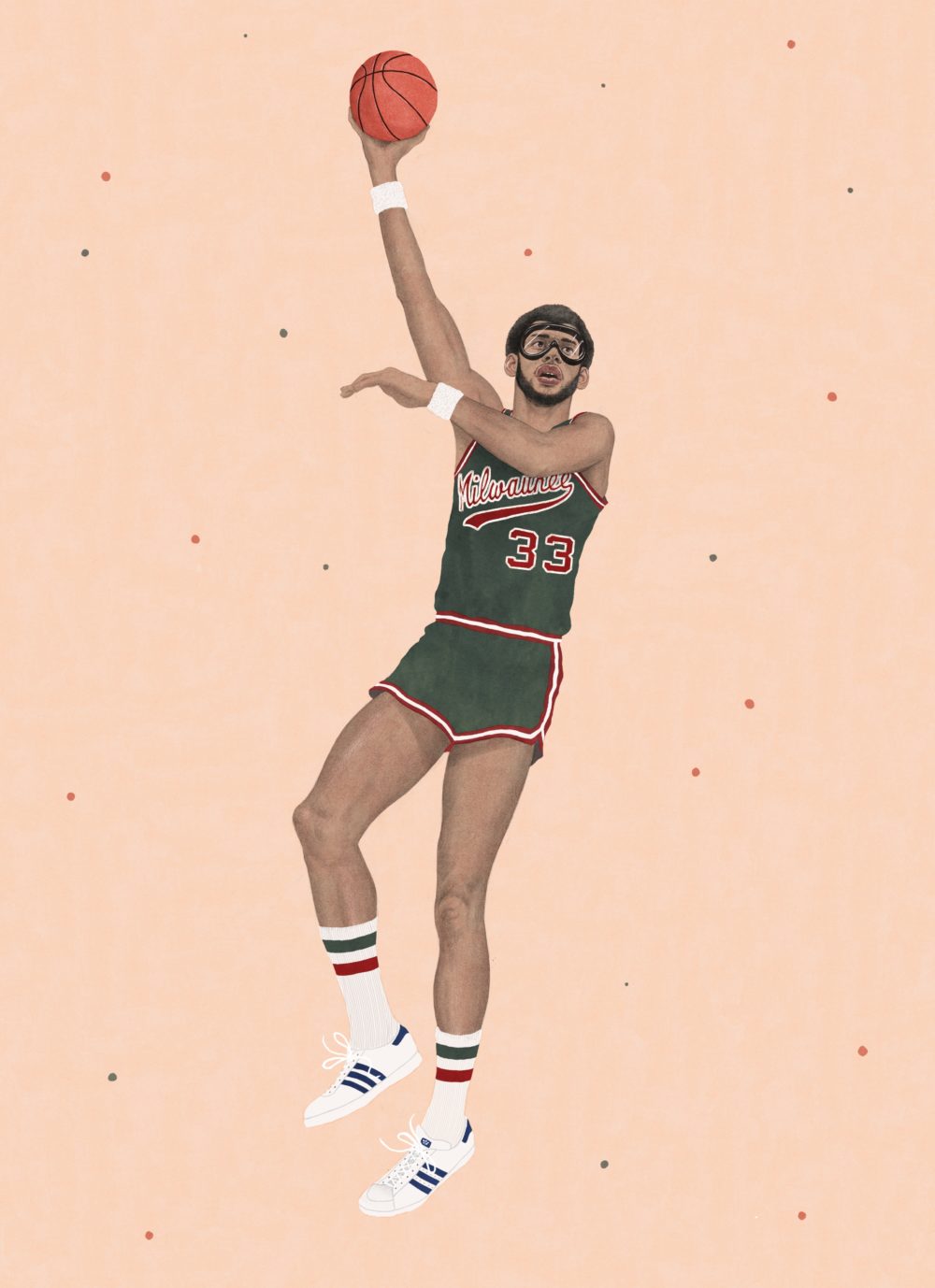 Kareem Abdul-Jabbar Kareem Abdul-Jabbar floated his skyhook shot beyond the outstretched arms of opponents as if they had been pinned to the ground. KAJ was all about grace and dominance in one devastating package. The towering centre altered the game. In tandem, he also wanted to change the world. A high school star in his native New York, Lew Alcindor, as his mother named him, was part of the greatest college team of all time, the UCLA squad who lost just two of their 90 games during a three-year spell on campus. During which time his slam dunk become such an unstoppable weapon that the shot was banned for nearly a decade from college basketball. Upon graduation, it was his turn to push back against the authorities. Chosen for the U.S. Olympic team just months after converting to Islam and switching his name, he withdrew in protest at the treatment of black Americans, the first of many steps into politics and the thorny issues of race and religion. On the court, his performance spoke volumes. In six seasons with the Milwaukee Bucks, Abdul-Jabbar led his side to one NBA title and began his record streak of 19 trips to the league’s All Star Game. Signing with Adidas, his name adorned basketball’s first-ever signature shoe. But Abdul-Jabbar’s best was still to come. Following a move to the Los Angeles Lakers and the arrival of mercurial maestro Magic Johnson, the ‘Showtime’ era began. The Lakers were huge box office, landing five championships in eight years and igniting a compelling rivalry with the Boston Celtics that carried the NBA from the fringes and into the mainstream of American sport. Hollywood came to watch — and then brought deals to Abdul-Jabbar’s table. He fought martial arts superstar Bruce Lee in Game of Death. Later, he took a comic turn as Roger Murdock in Airplane. There were numerous appearances on TV shows too. And all the while, he kept scoring, with that 38,387 point benchmark — no one has scored like Kareem Abdul-Jabbar. 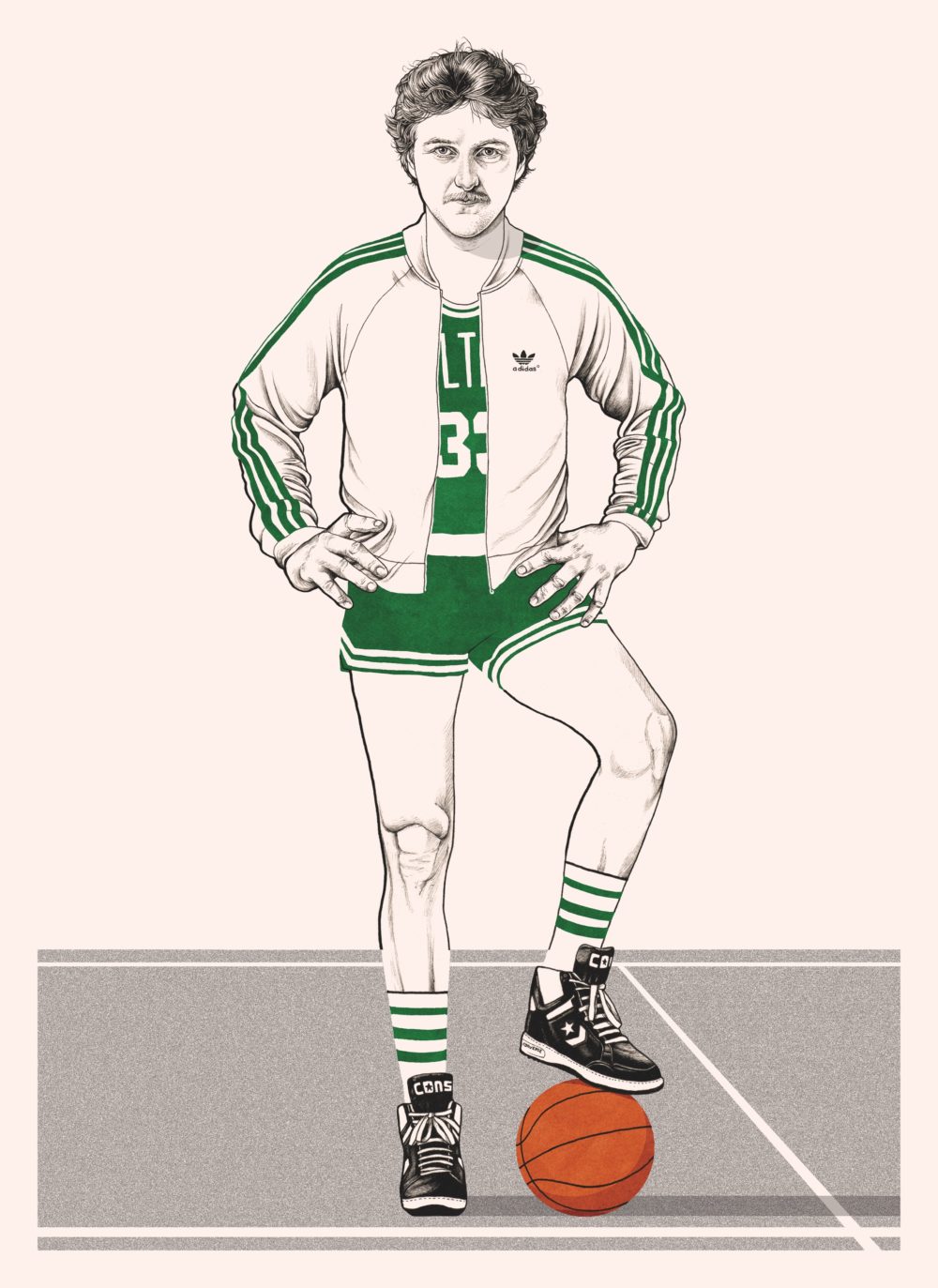 Larry Bird There was a legendary sneaker advert in the mid-80s where basketball’s two transcendent stars were urged to ‘Choose Their Weapon’. Magic Johnson, he of the razzamatazz Los Angeles Lakers, opted for blue and gold Converse Weapons. His supreme rival, Larry Bird, chose a more sedate pair in black. And that summed up perceptions over the decade. Magic’s Lakers were Technicolor. Bird’s Boston Celtics were plain and simple. But the supposed ‘Hick from French Lick’ in rural Indiana was far more sophisticated than the racially-tinged stereotypes suggested. He could shoot. He could defend. He could dribble. He could dazzle. If opponents expected a white boy from the cornfields to lack the toughness of his African-American foes honed on the playgrounds of the inner city, then they misjudged him at their peril. He could go head-to-head, fist-to-fist or trash talk with the best of them, making good on his regular vocal pledges to get one over opponents. The Celtics followed his lead, claiming three championships with their shooting star earning an equal number of Most Valuable Player awards. And even when back injuries eventually held him in check, there was time for one last hurrah — at the 1992 Olympics in Barcelona where the U.S. Dream Team swept all before them with an unbeaten run to gold that will surely never be topped. After retiring, Bird took the time-honoured foray into the movie business. Only Space Jam, which featured Bugs Bunny and Michael Jordan, lives on in the memory. And then only just. He earned better reviews upon his return to Indiana when he coached the Pacers to the 2000 NBA Finals. Yet, 30 years on, Larry the Legend’s duel with Magic remains a defining moment for both the league and the two friends/rivals. Their respective weapons were deadly. Rare was the time that either missed the mark. 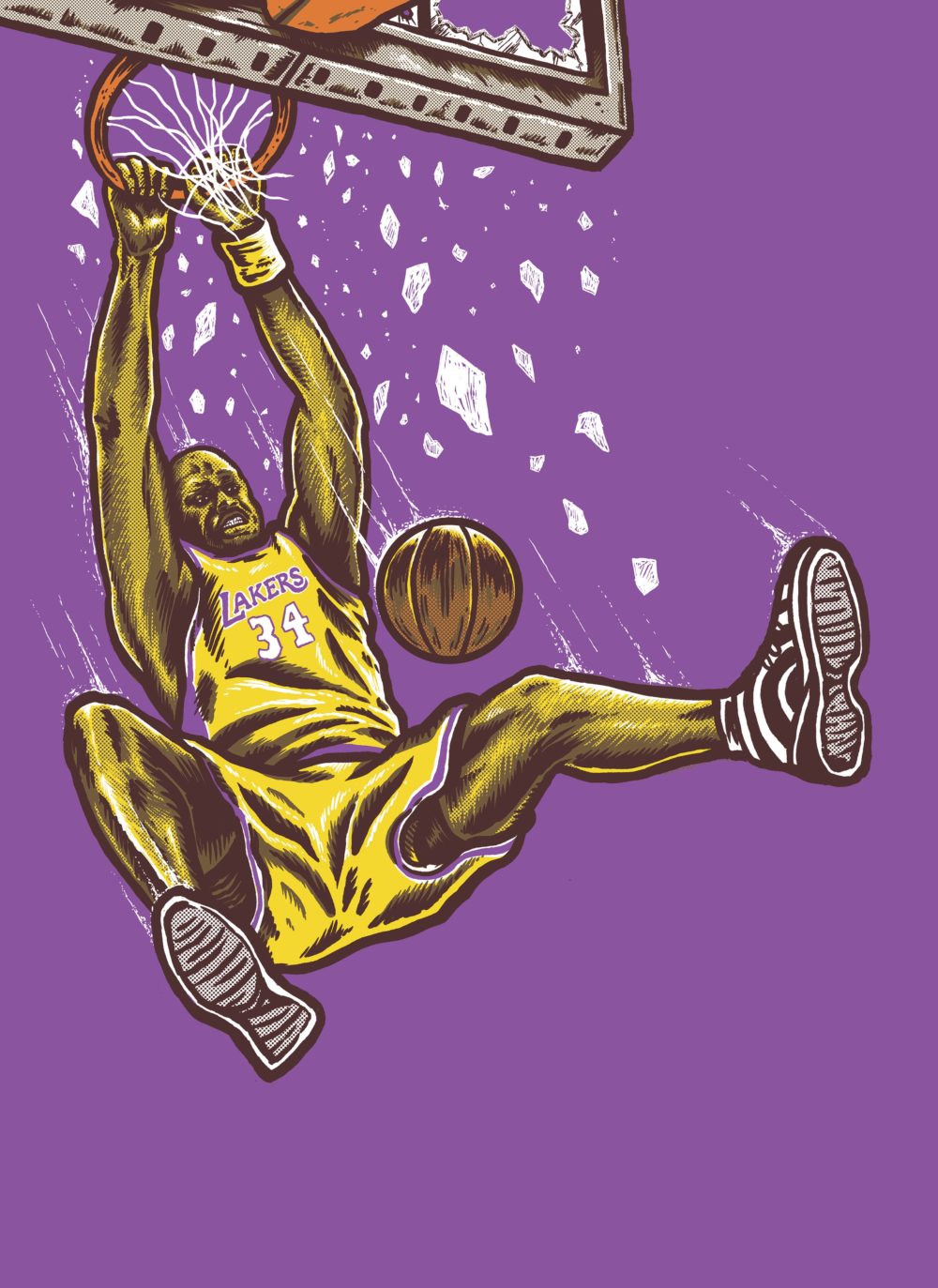 Shaquille O’Neal The Diesel. The Big Aristotle. The Big Galactus. King-sized, super-powered with an XXXL personality and a revolving taste in nicknames on the side, Shaquille O’Neal was a one-man wrecking ball with a game as agile as his wit. Living it large from the day he arrived in the NBA in 1992 to play for the Orlando Magic, the 2.16m goliath was as dominant as any centre in the league’s history, clad in his custom-made size-21 Reebok Shaq Attaq sneakers. Get out of the way or feel what it’s like to be an ant under a tractor tyre. Not to mention a few backboards along the way that shattered under the weight of his dunking. All of which led O’Neal to be one of the most coveted free agents in history when his initial deal with the Magic ended and he was spirited to Los Angeles where eight seasons with the Lakers garnered three championships. With Kobe Bryant as his running mate, it was as potent a one-two punch as the league had ever seen. But the barbs weren’t just aimed at their would-be rivals. The two squabbled and seethed, a pair of alpha dogs butting heads with neither willing to accept second billing. Their marriage of convenience ended, as these things inevitably do, in a messy split. O’Neal was shipped to the Miami Heat where one more title came his way. Yet still, we ask, what could have been in LA? 15 times an All Star, once an Olympic gold medallist and a World Cup winner with the United States, his sidelines are numerous. Try five rap albums, including one which went platinum. Several movies (The highlight? Playing a genie in Kazaam). Already a trained reserve police officer, he’s also got future plans to run for Sheriff. Shaq rules, ok? 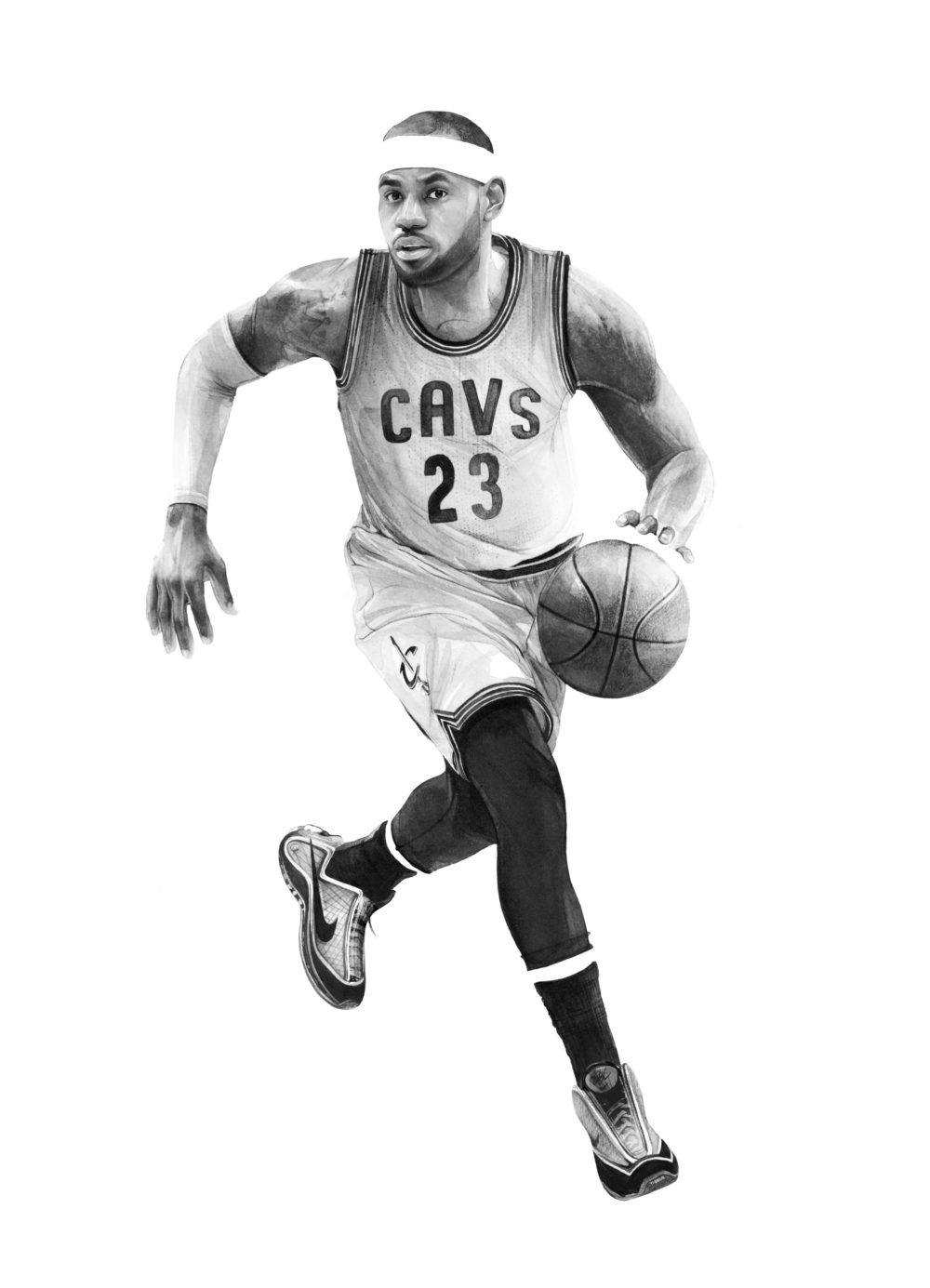 LeBron James Coming out of St. Vincent-St. Mary High School in the city of Akron, Ohio, LeBron Raymone James might have been the most-hyped teenager in sporting history. Magazine covers. Games on TV. And then back into classroom the next day. Yet almost a decade and a half later, LBJ has lived up to the billing — and then some. Now sparking an argument over whether he or Michael Jordan is Greatest Of All Time, the Cleveland Cavaliers’ uber-star has ripped up the rulebook of positions — as happy as a playmaker as a rebounder as an all-over-the-floor scorer with shooting that is beyond clutch. Four times the league’s Most Valuable Player (being honest, it should have been more), his first spell with his close-to-hometown Cavs was a tale of near-misses and frustrations. Individual genius, collective failure. Which is why he took his talents to the Miami Heat in 2010, creating a super-team that landed two titles in four trips to the NBA Finals. For the one-time kid from Akron, home is where the heart is. And the fans in Cleveland whose hearts were broken when he departed were elated when he returned in 2014 on a mission to bring a championship. The twice Olympic gold medallist kept his promise when, in 2016, James led the Cavs to an improbable comeback victory over Golden State by his sheer force of will. The beneficiary of a reported $1 billion dollar lifetime shoe deal with Nike, his LBJ line has been the sneaker of choice for a decade. But that’s cash he’s reinvested into other business interests, including a burgeoning TV production empire and a small stake in Liverpool FC. He also had a role in the 2015 movie Trainwreck. Shockingly, he wasn’t half-bad. LBJ may be all about the hype. But he is also substance. Like the NBA itself.