Cultural Tectonics in the City of [Fibre] Glass 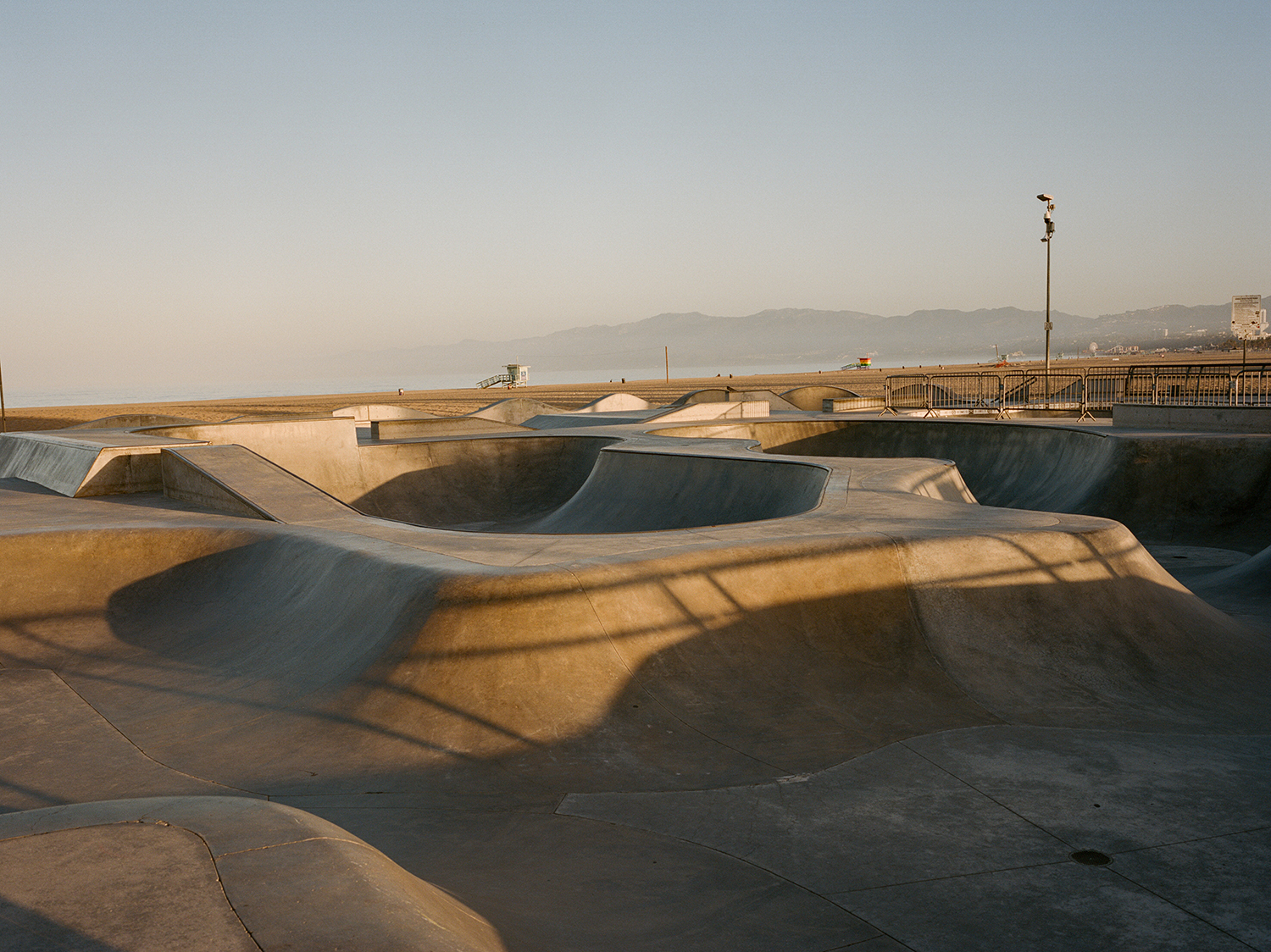 The City of Los Angeles is dissected by cultural tectonics as powerful as the the San Andreas fault’s strike and slip. Described to the west by the Pacific Ocean and surrounded inland by deserts, forests and mountain ranges, the LA sprawl is now home to some eighteen million souls. The place is a crucible of pop-cultural energy and in the short century of its becoming its power has radiated to every corner of our culture. In LA the post World War II explosion of the arts, entertainment, aerospace, technology, communications, transportation, recreation and fashion begat unique waves of energy, which produced in its turn generations of youthful outlier innovation.
It is little wonder that surf and skate culture, intertwined with the fabric of the everyday, took root here more powerfully than anywhere else. Not only is the beach a totem par excellence of Angelino aspiration, but there are more pools in the San Fernando Valley than in the entire state of New York. Skate spots of infamy such as Hollywood High, Stoner Park, Hawthorne, JKwon, Lincoln Park, The Berrics and the West LA Courthouse are vastly outnumbered by miles of connective tissue made of rideable concrete. In fact, there is probably more ‘crete in the kerbs of Los Angeles than in all of the skateparks in the rest of the world combined. Laugh now, cry later. The LA game is waged live. Spots come and go in an instant. Riders on the real win all the battles. Losing the war is an alien concept to quick strike specialists who are beyond long gone when the scores are tabulated. In a meritocracy like this with money to burn there’s everything to learn. Los Angeles is the proof that comedy is the reconciliation of paradox. The future original reinvents itself here constantly. Manifest destiny collides here with insidious density. 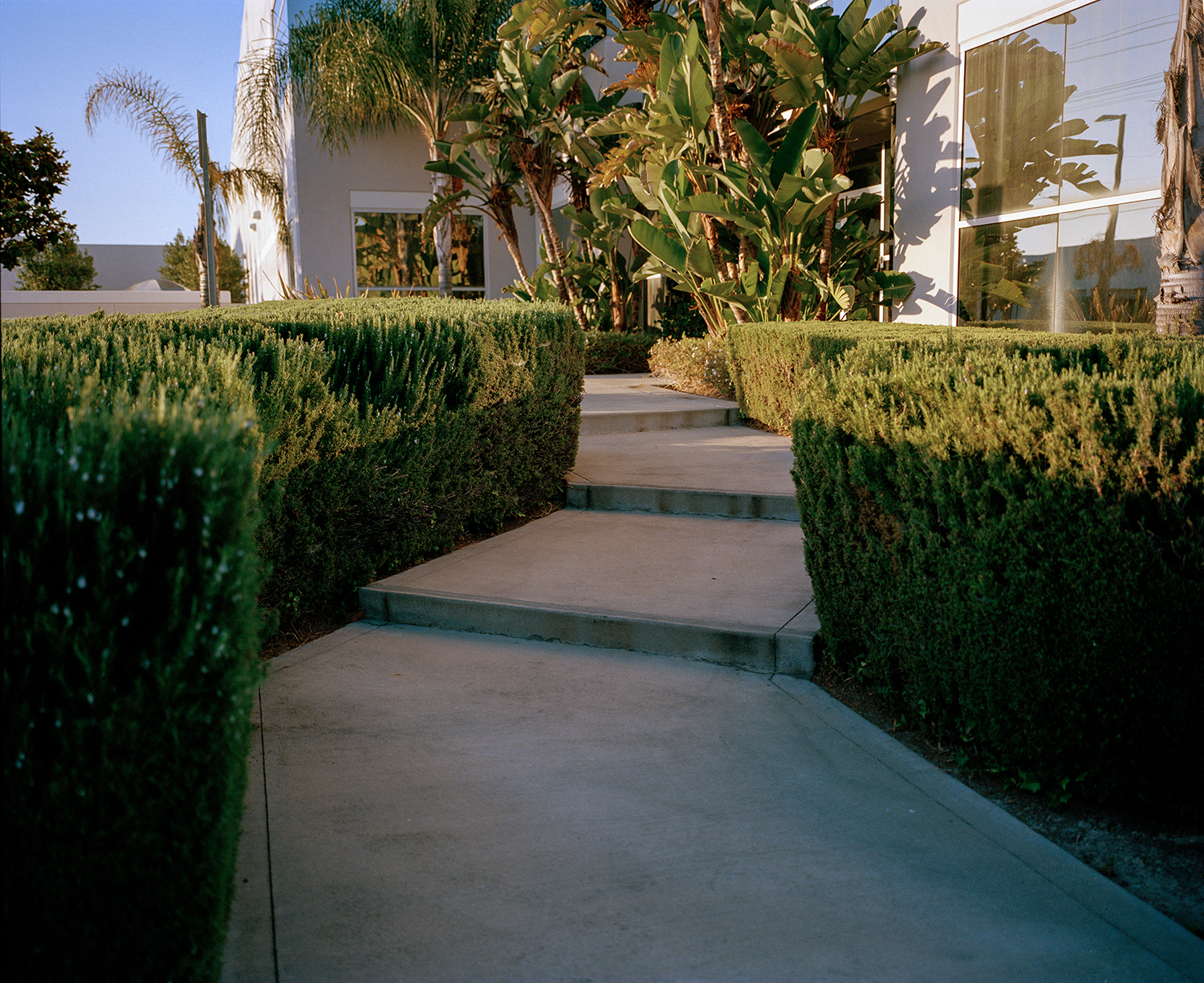 Pacific Systems Homes Surfing and skateboarding in Los Angeles was fuelled by access to materials and techniques that were developed by aerospace manufacturers. This technology, of course, accelerated by the growing military industrial complex of the early 20th century, facilitated the mass production of fun fun fun. In the 1930s Pacific System Homes Inc., based at 5800 South Boyle Avenue, produced intricately crafted balsa and redwood laminated surfboards — the first to be commercially manufactured anywhere on the planet. The firm advertised that their Swastika and Waikiki Hawaiian Surfboards were: “precision built with modern up to date machinery”, and championship winning surfers were employed there. In 1932 The Outrigger Beach Patrol in Waikiki imported these boards for use in Hawaii and Pacific System’s product became the official board of the Outrigger Canoe Club. Thus technology from the LA suburbs helped inform the practices of the Polynesian ancients. Dave Sweet of Santa Monica developed and sold the first polyurethane foam core surfboards. Dave’s associate Kent Sherwood was a former Waikiki beach boy. Kent would usher his stepson, a four-year-old Jay Adams, into Sweet’s atelier. The child who would grow into the crown prince of the Z-Boys and pioneer of dynamic skateboarding delighted in skating out of the showroom’s doors and into the heavy traffic of Olympic Boulevard. 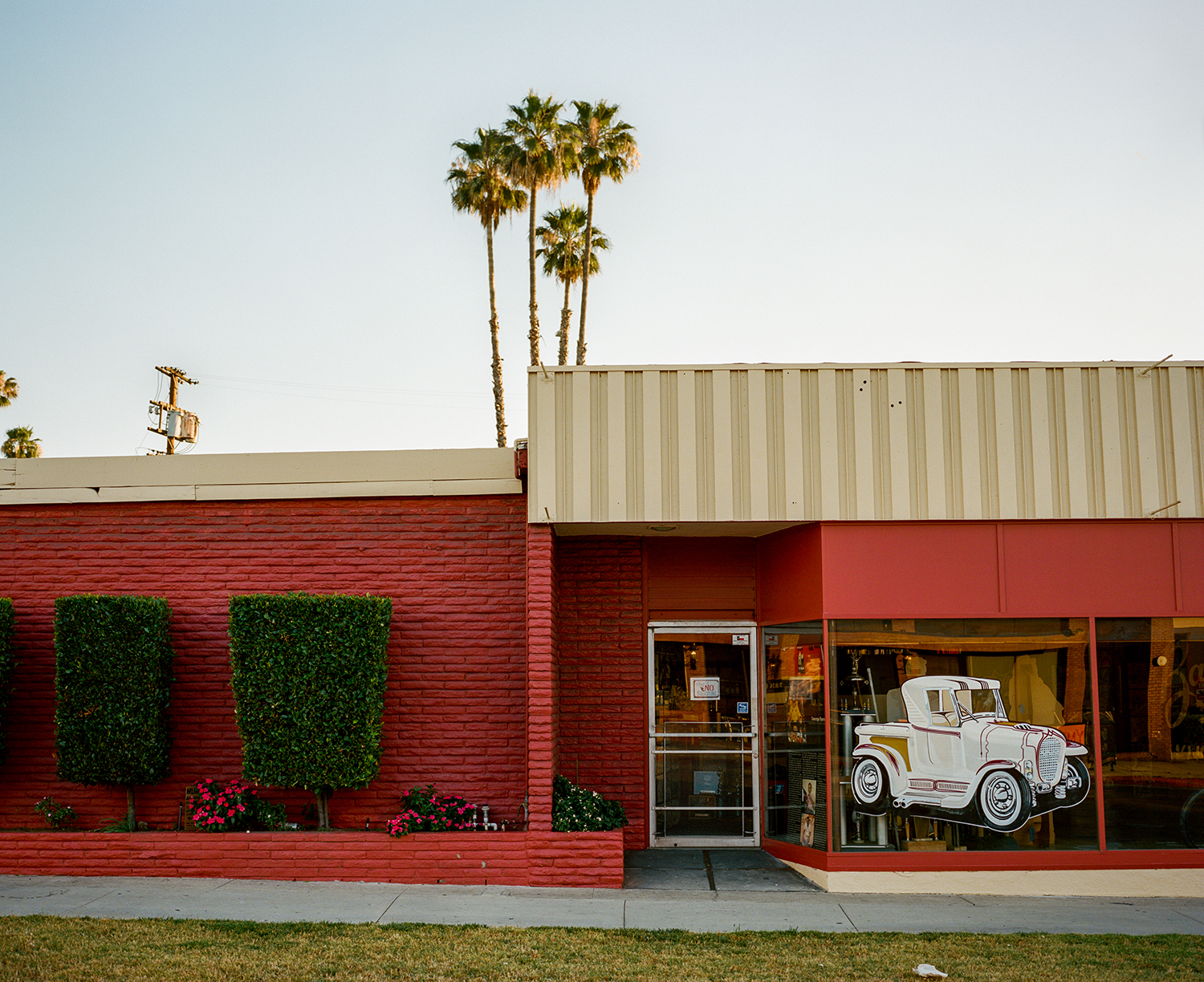 Barris Kustom City Automated motion consistently runs through the history of skateboarding and surfing. Transportation is not an end in itself. Speed, style and fun are all elements of the equation. Petrol and Surf and Skate culture are forever in sync. The internationally prominent artist Billy Al Bengston was first known as ‘Moondoggie’ at the cult surf spot that is Malibu. He supported himself for years as a motorcycle racer at LA’s Ascot Park. He also painted cycles and pioneered Mexico’s Puerto Escondido as a surf spot. A kid called Phil Hill, meanwhile, a nose-gun assembler at Santa Monica’s Douglas Aircraft plant, would become America’s first Formula One World Championship winning driver. Along the way he tuned street racing jalopies for SoCal surf pioneers such as Joe Quigg and Bobby Talmadge. Dale “the Hawk” Velzy, who in the mid-fifties became the biggest mass manufacturer of surfboards and who helped spark the post-Gidget boom in surfing as a pop culture, piloted George Barris chopped Mercs. In the pursuit of horsepower domination the Hawk scoured the arroyos of Harry Miller’s old Malibu ranch to salvage one-off speed parts built by the venerable Indianapolis racing car builder. Newport Beach surfer Bill Tritt created the first fibreglass production automobile in 1949. His company ‘Glasspar’ was also one of the biggest glass boat builders. The firm crafted the original ‘Autopia’ car bodies for the opening of Disneyland in 1955. In 1964 Ed ‘Big Daddy’ Roth created the Surfite, a revolutionary custom concept surf wagon scratch built from hand-sculpted fibreglass. Roth also sponsored the Rat Fink Skateboard team for whom he custom painted boards and tees. 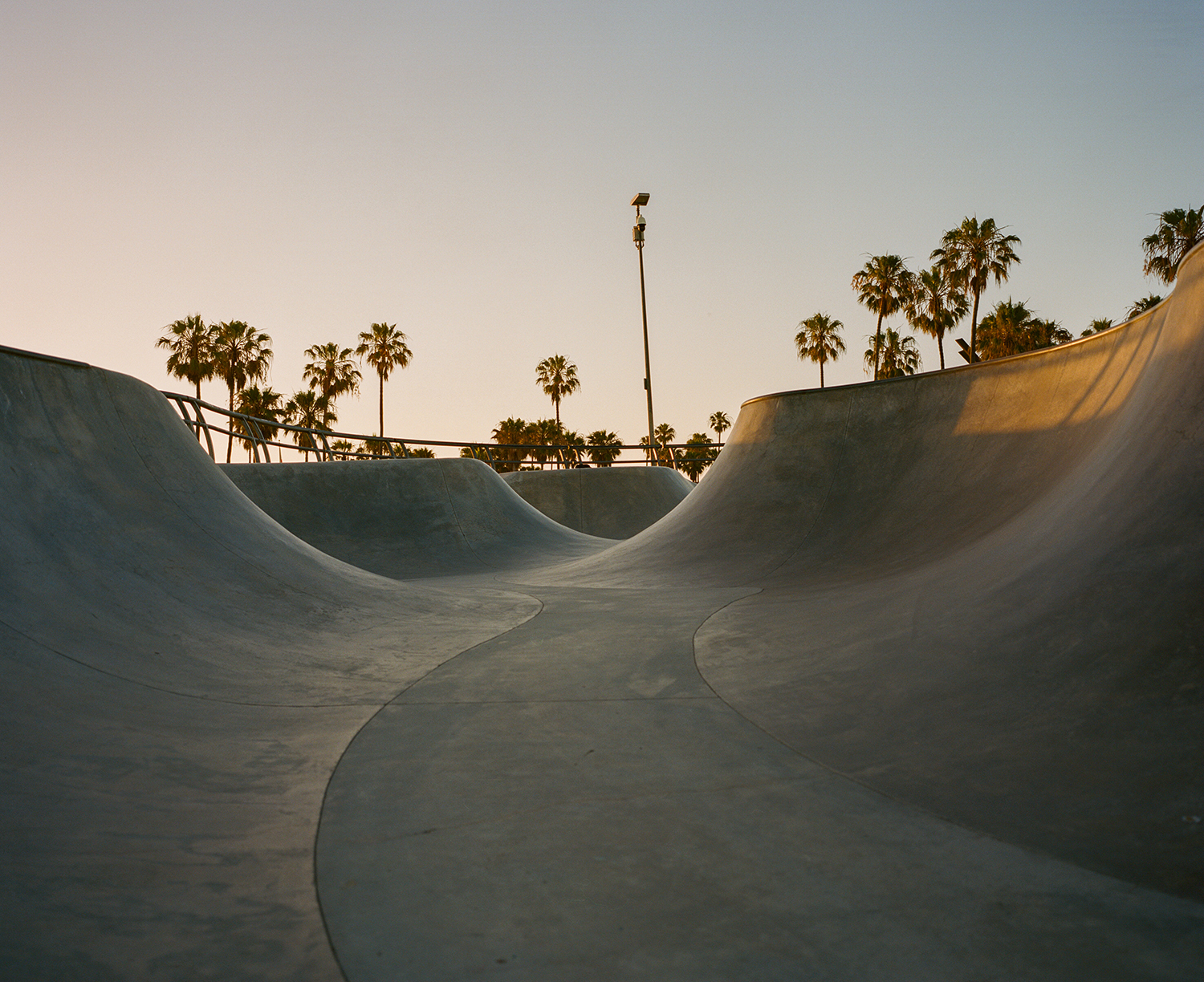 Venice Beach Skate Park In 1907 American novelist and adventurer Jack London published an account praising the stupendous wave riding of George Freeth of Waikiki. The author dubbed the young Hawaiian ‘The Bronze Mercury’ and related, “His heels are winged, and in them is the swiftness of the sea.” Later that year Freeth came to California from the islands, settling in Venice where he introduced the act of surfing to southern California. Henry Huntington’s Pacific Electric Railway heavily promoted George’s public exhibitions of the ancient Polynesian art of papa he’e nalu. Newspapers carried reports of gigantic crowds who marvelled at the Hawaiian wonder’s ability to walk on water. In 1908 Freeth stunned locals during a two and a half hour rescue off the Venice pier, where he single-handedly saved seven Japanese fishermen from the high surf in gale force wind conditions. Tom Blake teamed with Venice aircraft fabricator Thomas Rogers in the 1930s to craft his revolutionary hollow surf and paddleboards. Blake’s innovative use of composite construction techniques produced boards that were drastically lighter than the prevailing solid wood plank boards in general usage. The designer subsequently received patents for a number of innovations including the first for a surfboard fin. Jerry Vultee was a surf rider who grew up in Ocean Park and achieved notoriety as an aviation designer and aircraft maker. He worked on key projects at Douglas, Northrop and Lockheed prior to eventually starting Vultee Aircraft. As a close friend of Hawaiian surf pioneer Duke Kahanamoku’s and Tom Blake’s, Jerry functioned as a fulcrum for the convergence of ancient Polynesian design wisdom and emerging aeronautic construction and technology. 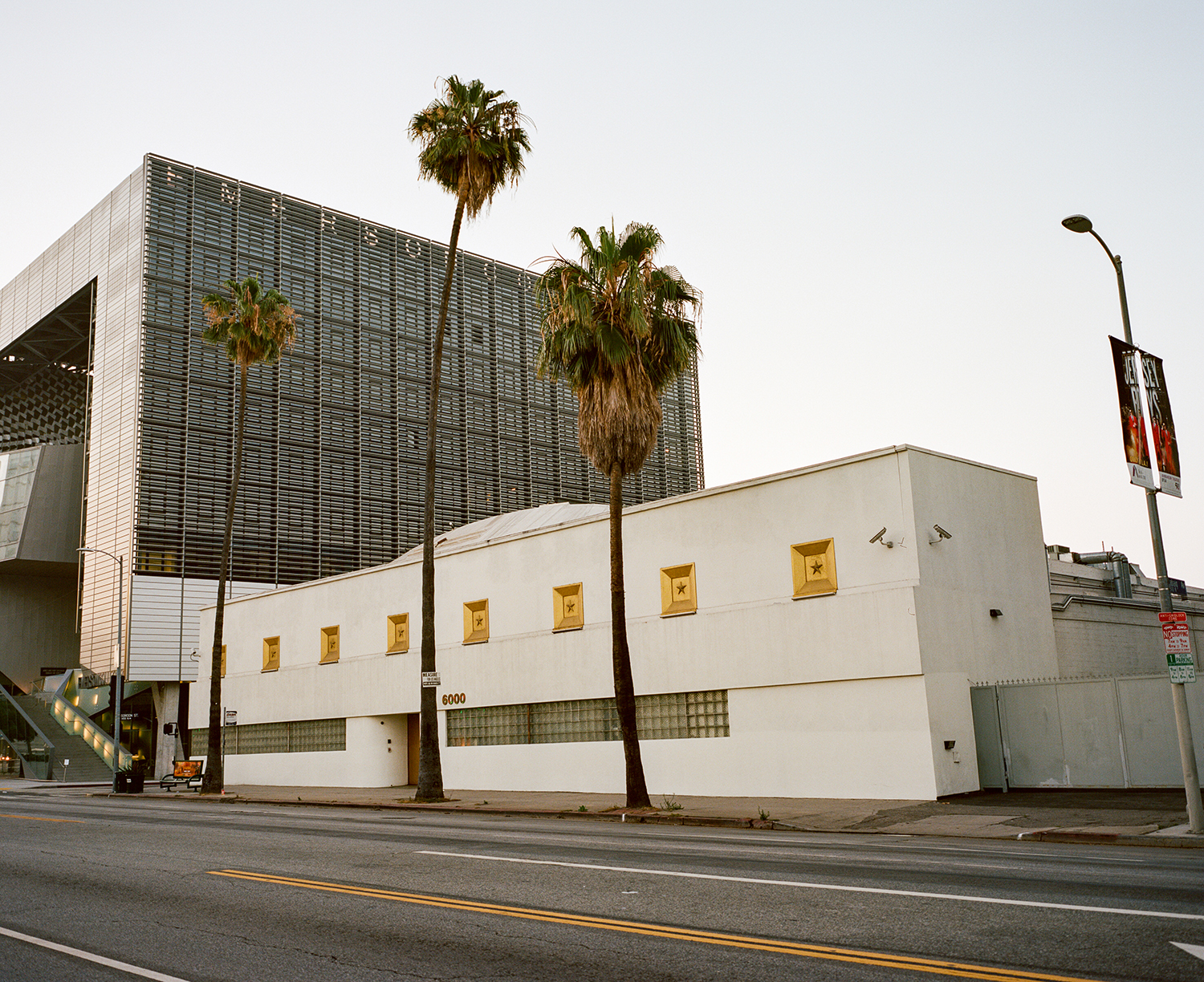 United Western Recorders The 1966 Beach Boys Album //Pet Sounds// is Brian Wilson’s definitive statement — and possibly the sonic quintessence of the city in which the record was nurtured and created. You can hear the voice of righteousness in it. Honesty without compassion is brutality. Wilson, the creative force at the centre of The Beach Boys knew this. His mission was to create a crystalline, distilled vision of compassionate honesty unhindered by outside distractions and interference. In order to create his masterpiece, in January 1966 he sequestered himself at United Western Recorders Studio 3 on Sunset Boulevard. Wilson conspired with a 43 piece orchestra in the studio one day and barking dogs on another. He used ground breaking techniques. He briefed musicians to let their imaginations run riot. The result of this intense process — an elegy for youth and beauty and transience that prefigured the psychedelic revolution that was soon as hand — cemented both of Wilson’s reputations. Those who appreciated what he had done considered him an unmatched genius — a visionary whose work encapsulated a vision of the American Dream that managed to harness its residual innocence — but yet added something of it that was unequivocally beautiful and locked in tight to the times. Others dismissed the work as the garbled product of a lost soul. Whatever judgement time passes on Pet Sounds one thing is certain. It could have only been produced in the City of Angels. 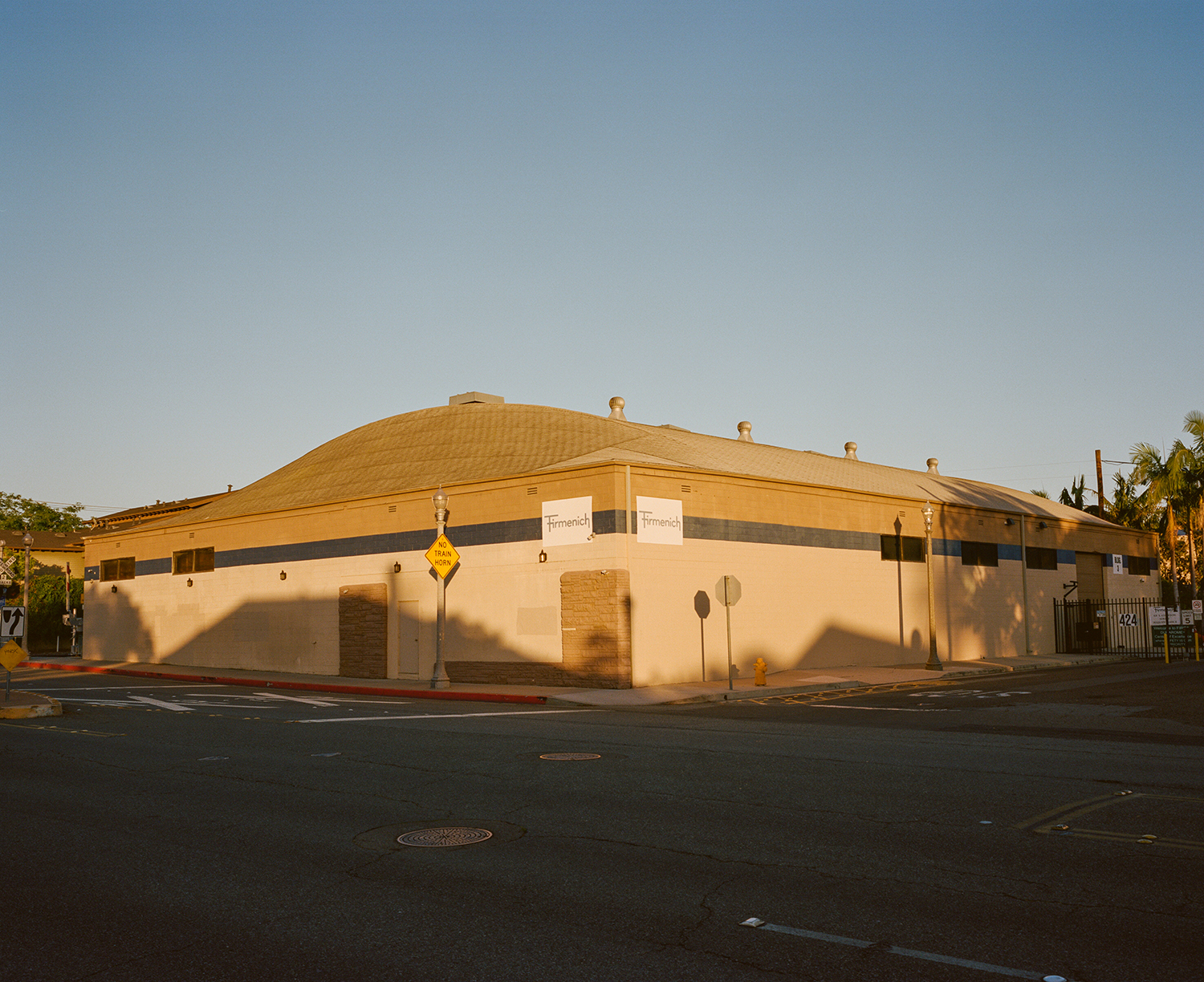 The House of Vans On March 16, 1966 The House of Vans in Anaheim debuted to the world. The shelves were stocked with demo shoes and empty cardboard boxes. Most importantly the company founders Paul and James Van Doren, Gordon Lee and Serge D’Elia had a plan. On that first day customers would make orders, then the group hand-made then shoes on the premises and delivered them the same day. One pair led to another and so the saga of Vans began. The inspiration for the unique start up occurred at the Huntington Beach Surfing Championships a year before. Paul Van Doren had met visiting Hawaiian wave riders, including Duke Kahanamoku (the godfather of modern surfing) as well as a stellar cast which included Butch Van Artsdalen, California champion Corky Carroll and Fred Hemmings, who would go on to become Senator for Hawaii. All of the surfers present were attired in distinctive blue and white Hawaiian aloha shirts. In the course of a conversation Van Doren mused that he could make up a pair of shoes out of the shirts’ unique hand printed material. The story goes that Duke gestured magisterially to Hemmings, who at once removed the aforementioned garment and handed it to Van Doren. Paul drove directly to a shoe factory in Santa Ana owned by Randolph Rubber Company and personally fabricated a pair of from the material. He returned to Surf City in the morning and handed the shoes to Kahanamoku, who proclaimed that they should go into business together. “The Official Duke Kahanamoku surfer shoe” came into existence. By the next year the Van Doren brothers and their two associates were embryonic manufacturers with a vulcanising set-up and a sewing machine in a storefront on Anaheim’s Broadway.