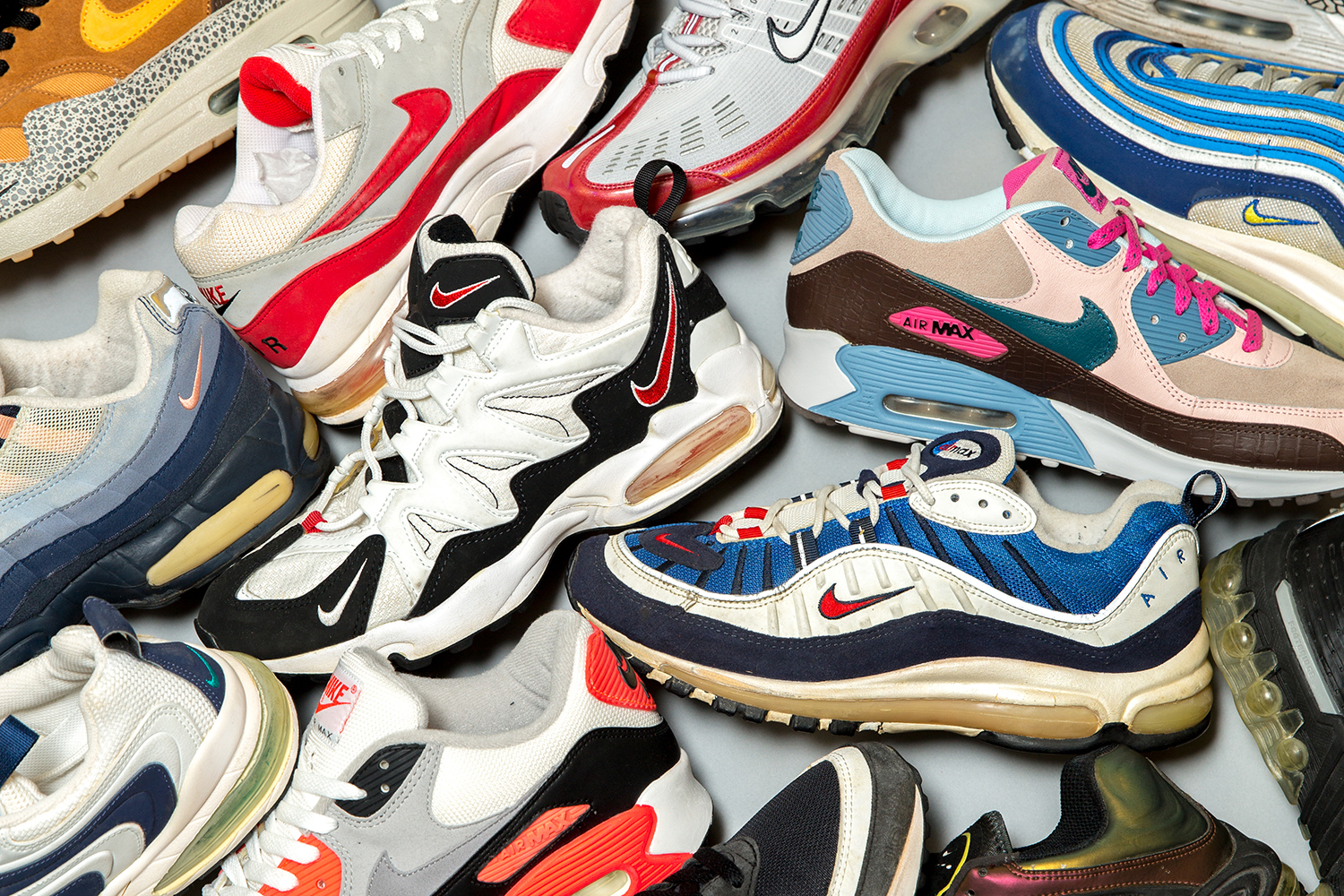 Now in it's fifth year running, Nike are celebrating their annual Air Max Day celebrations once again. The 26th march signals the anniversary of the day the world bore witness to the innovation that was visible air. The world has certainly changed since 1987, and the technology has changed form in an untold amount of ways. To try and show you just a few different variations on the technology, we've dug into our Head Office archive and pulled out a few gems in celebration of it's birthday. Some you'll be more familiar with, some you might see glimpses of within other shoes, and some will definitely have you scratching your head.

Nike Air Max Tailwind Back in 1979 the original Nike Air Tailwind was the first shoe to ever feature ‘Air’ Technology of any kind. A capsule of pressurised air sat contained inside of a foam midsole, hidden from sight. Years later after the introduction of Air Max in 1987, freeing the unit from its constraints, the Tailwind moniker took on a different form, making use of the exposed unit and experimenting with the different forms it was able to take. Characteristics on the uppers took note from other shoes of the same era, visually evolving year by year. 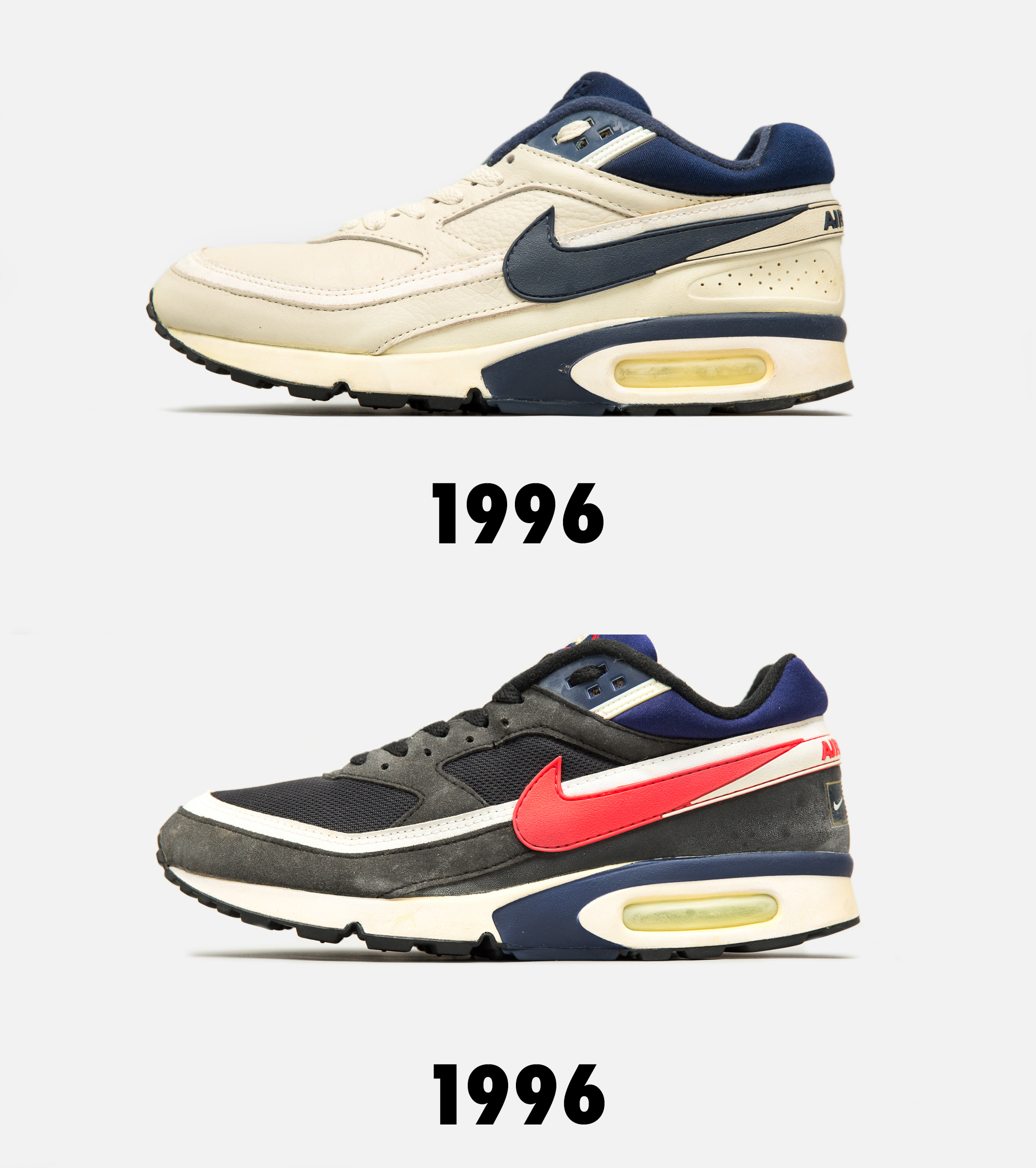 Nike Air Max Classic BW Premium & ‘Olympic’ - 1996 Next up, Atlanta, where the USA dominated on home turf by topping the medals board once again, with 101 medals including an incredible 44 golds (the second placing country that year was Russia with 26 Gold). Michael Johnson placed first in the Mens 200m and 400m, with several other key athletes placing first in other track & field events. The Classic BW was Atlanta’s choice of shoe, originally created as an Athlete Only pair at the time of the games and finally releasing to the public in 2004. Draped in navy & black, the 2004 release came with a Nike branded flag patch on the heel. Although it doesn’t appear to be present on this retro, a USA branded patch can still be seen on the tongue to keep the theme strong. 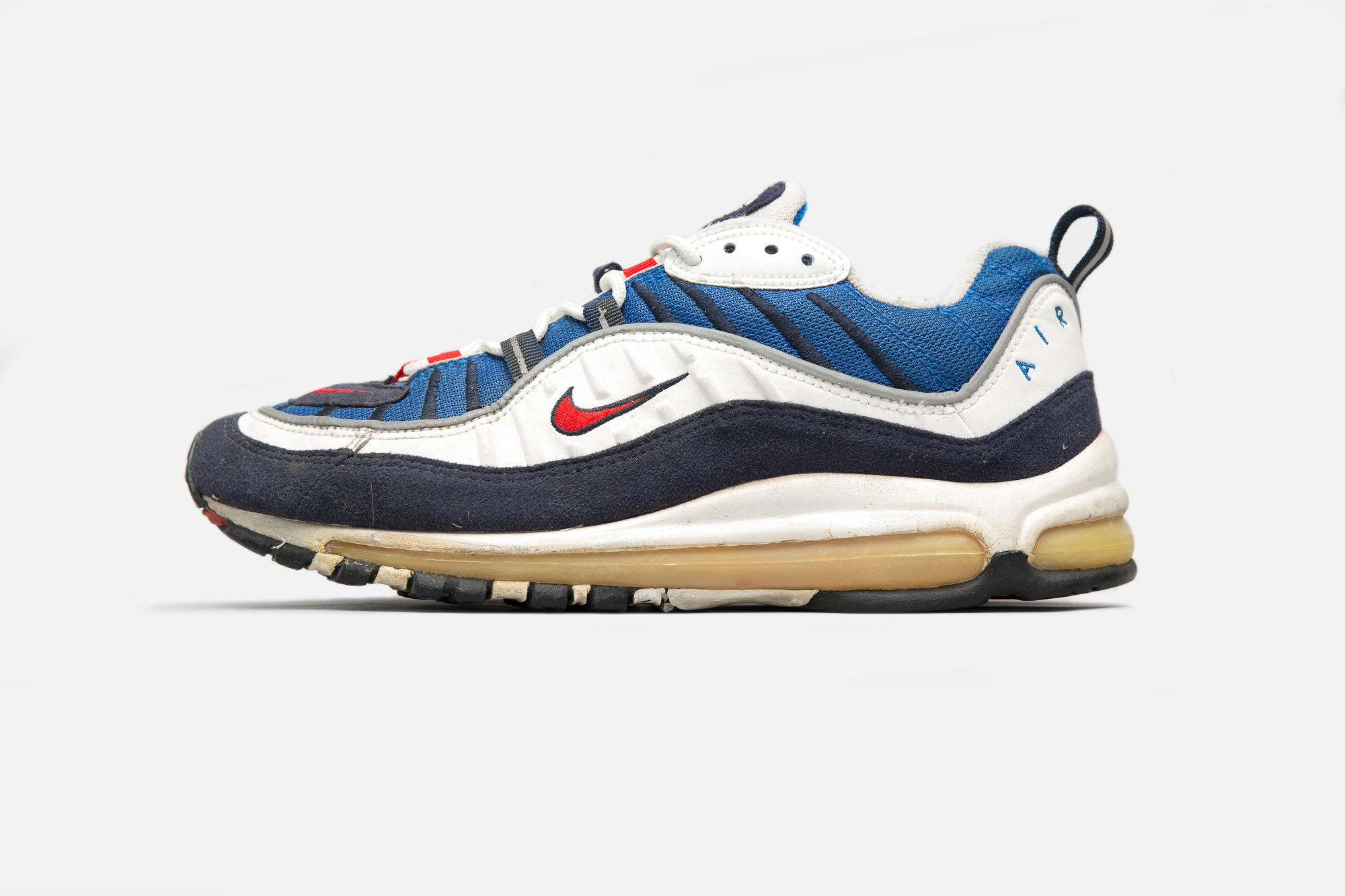 Nike Air Max 98 OG ‘Gundam’ One of the strongest and most underrated of the Air Max lineage is undoubtedly designer Sergio Lozano’s interpretation, the Air Max 98. One of the most popular colour-ups of the Air Max 98 has always been the ‘Gundam’, a palette of Black, White, Red and Blue which took cues from the armour plating of the mechanical robots from the Japanese Anime series of the same name. Yoshiyuki Tomino’s creation featured army’s of Mecha suited warriors battling it out both on earth and in space. The Blue and white waved panels span the length of the 98’s upper, complemented by the fire red contained within the full length airbag. 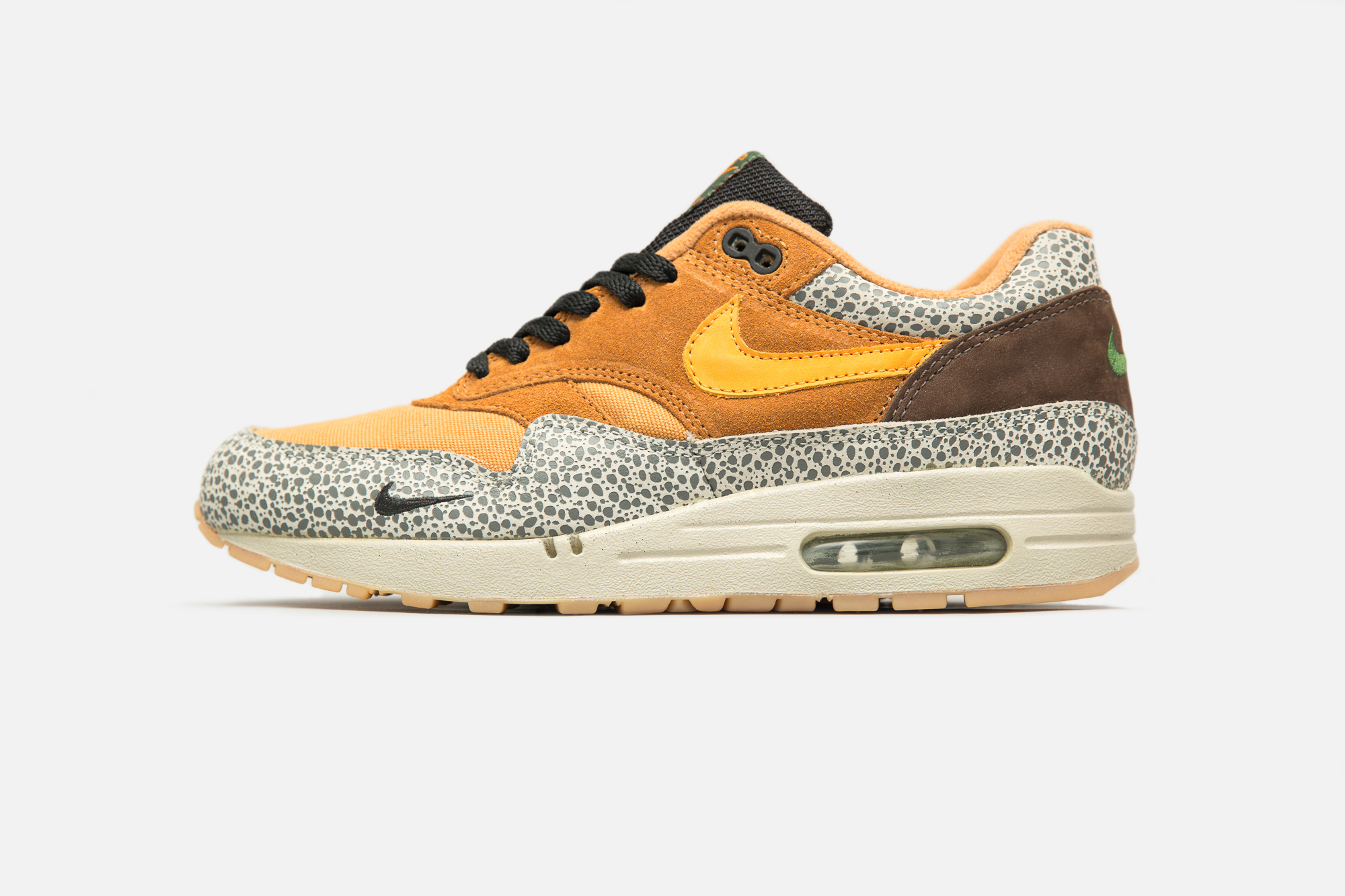 atmos x Nike Air Max 1 'Safari' Sitting at the top of many a collectors wish list, and nowadays reaching unwearable status due to age, in 2002 Japanese retailer Atmos created one of the most sought after Air Max 1’s of all time. Drawing inspiration from 1987’s original Air Safari, the patterned mudguard sat alongside premium suede, canvas, and of course the favourable mini-swoosh on the toebox. The shoe re-released in 2016 with a few minor design tweaks, but its still the first version that sets the standard for releases in the modern day. 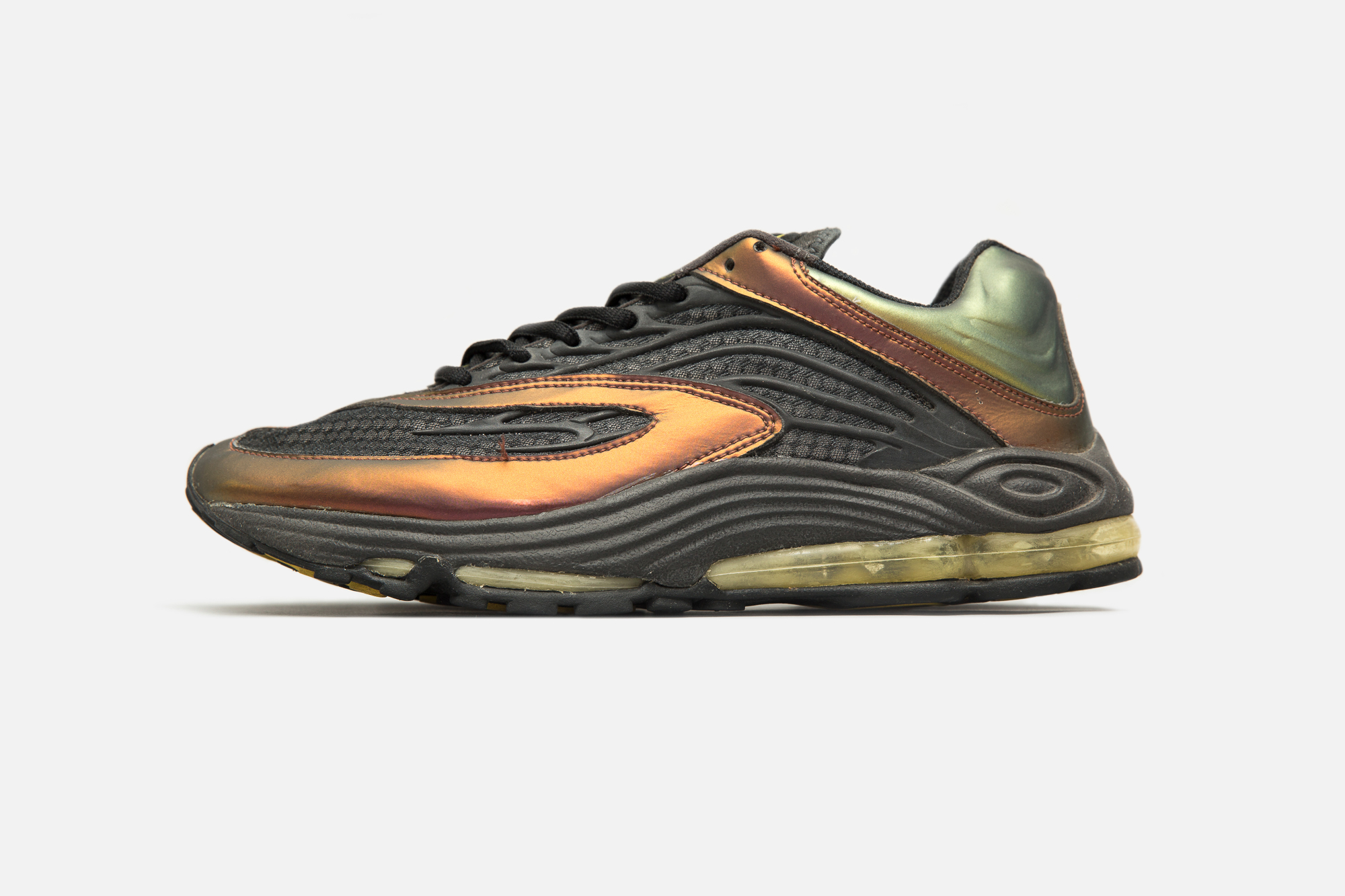 Nike Air Tuned Max  - 1999 The modern day crowd will recognise the colour-up on this one from Skepta's recent partnership last year, as it was the first pair of Air max he ever purchased with his own money, but 1999’s daring addition to the ‘Tuned’ family was a radical departure from previous big-bubbled releases. Both the colouring and shapes that wrap around the sidewalls give off a much darker feel than traditional runners, looking almost 'Gigeresque' in their presentation with the additional swirling cage, layered mesh and iridescent panels. 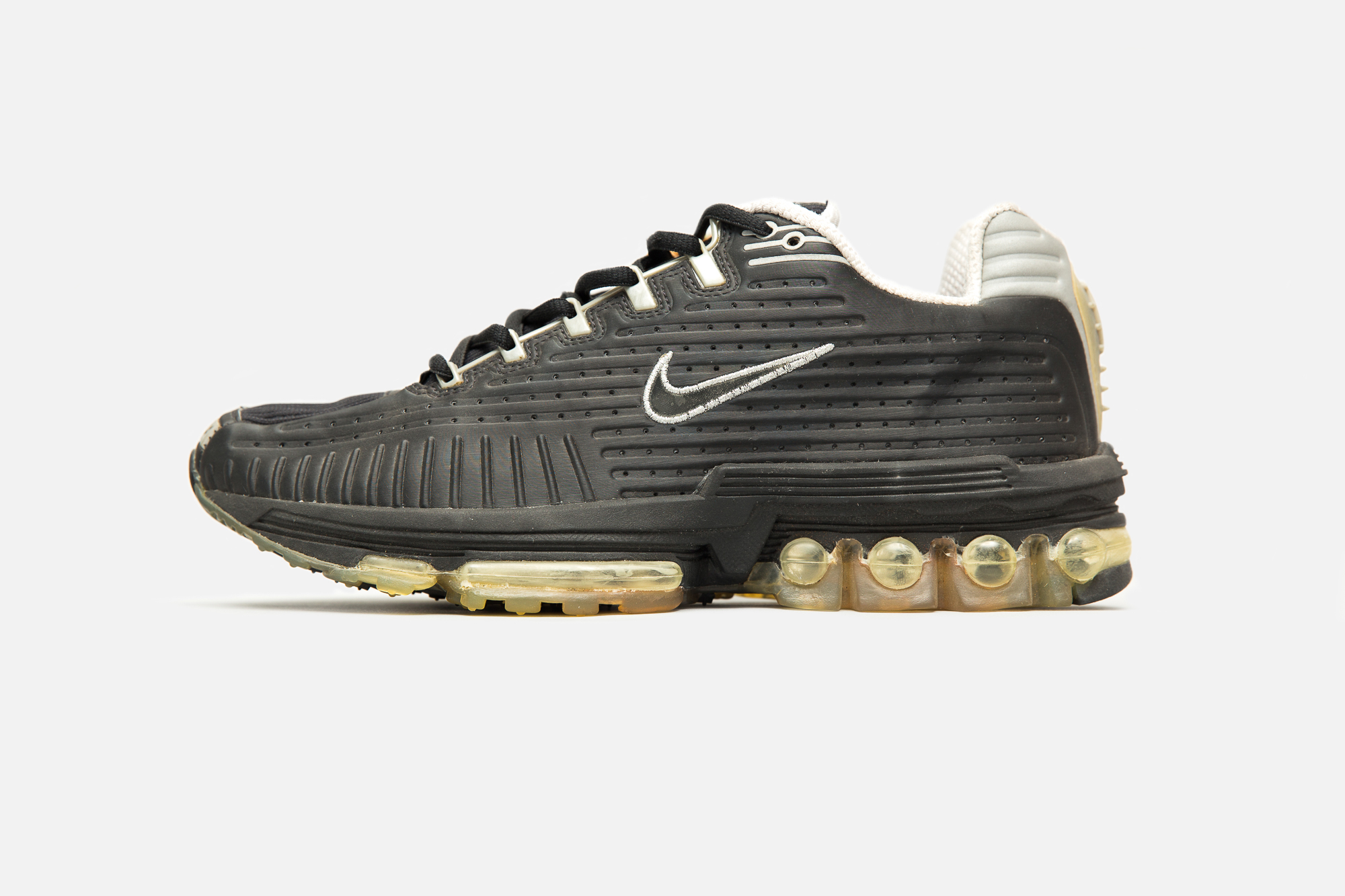 Nike Air Max 2001 The turn of the millenium hit a year previous, and design within footwear started to get a bit more elaborate. It seemed to follow a ‘more is better’ approach (maybe somewhat questionably!) and a lot of elements seemed to be getting thrown onto shoes. The Air Max 2001 is a prime example of this, with a pretty varied selection of textures wrapping around the upper, alongside the eccentric 'Tube Air' units that sat under the heel. Usually more of an apparel based technology, the 2001 also featured Dri-Fit, a ventilated system allowing for improved breathability/ 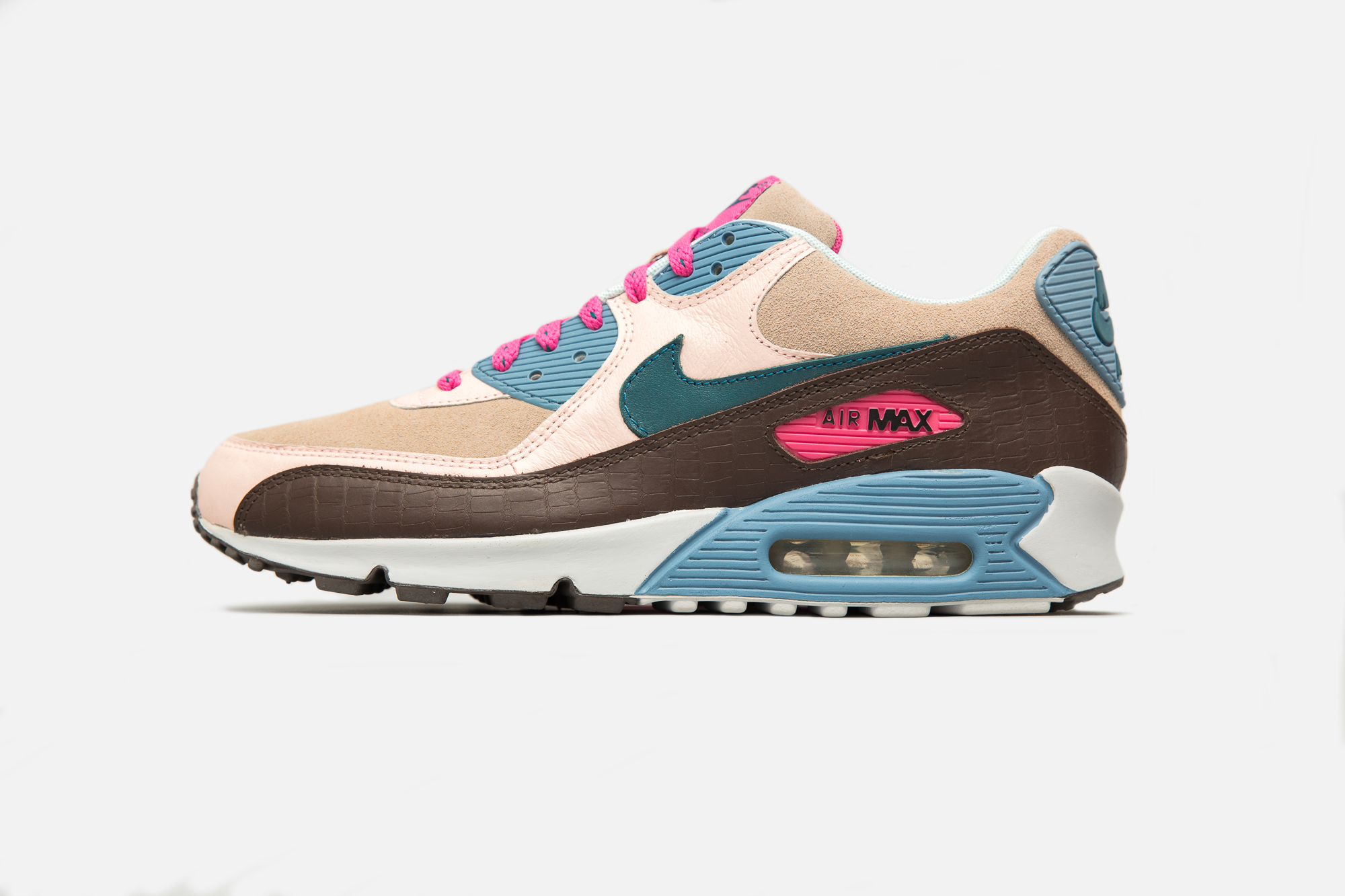 size? x Nike Air Max 90 ‘Clerks’ Pack - 2006 One of our all time favourite releases together with Nike is 2006's Clerks pack release. Produced alongside other shoes by retailers from across the globe, we created a three shoe pack which were all designed by staff from some of our older stores. The collection featured an Air Stab by Carnaby Street, Classic BW by Manchester, and the Air Max 90 by Brighton. The Air Max 90 was inspired by the varying colours found on beach huts on Brighton's seafront, with a small grpahic icon also placed on the insole to reinforce the theme. 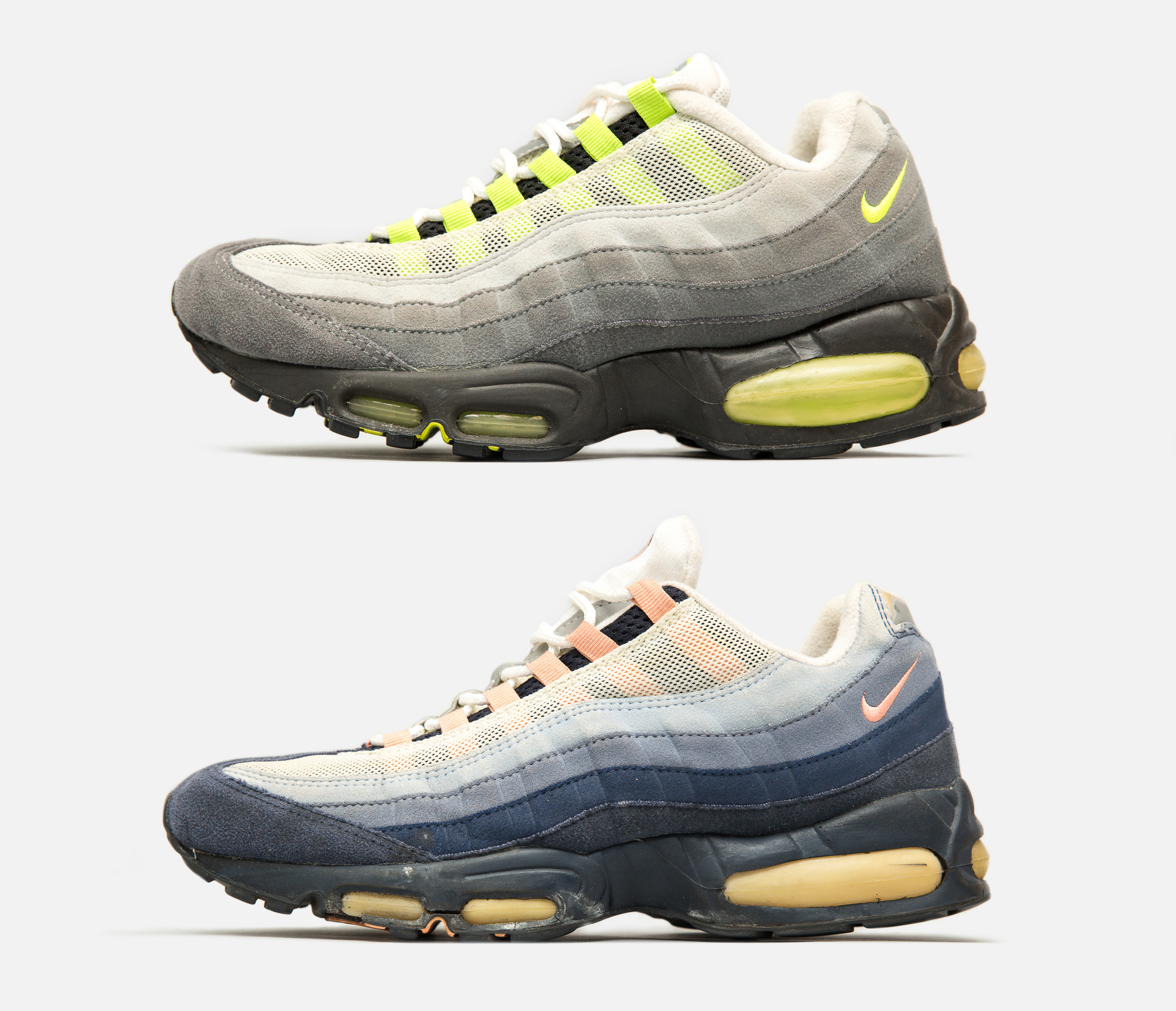 Air Max 95 'Neon' and 'Melon Slice' - 2001 Among many of the other shoes he created throughout his career, Sergio Lozano has always been praised the highest for his work on the Air Max 95. A wild shoe when it first arrived 8 years after the first chapter, it featured an interesting concept that modelled itself after elements of the human body. In it’s early days, each air unit contained a different pressurised amount of air, measured by the PSI number marked on the bubble, and they looked so bulbous you were almost afraid to walk on them! The above colourways both released in 2001 during the ‘big bubble’ era that's often credited as one of the best forms of the 95.

Air Max 97 Celebrating two decades as an icon within the timeline, the timeless nature of Christian Tresser’s Air Max 97 has meant today’s youth are seeing it with fresh eyes, and it’s still as relevant today as it ever was. At the time it stood at the forefront of technology, hosting the largest Air Unit of any Nike shoe, and its reflective lined upper and innovative lacing system set it apart from anything else on the market. We’re not too sure on the origin of these transparent soled releases from 2000, but it’s definitely a feature we wouldn’t mind seeing make a return in the future on a 97. 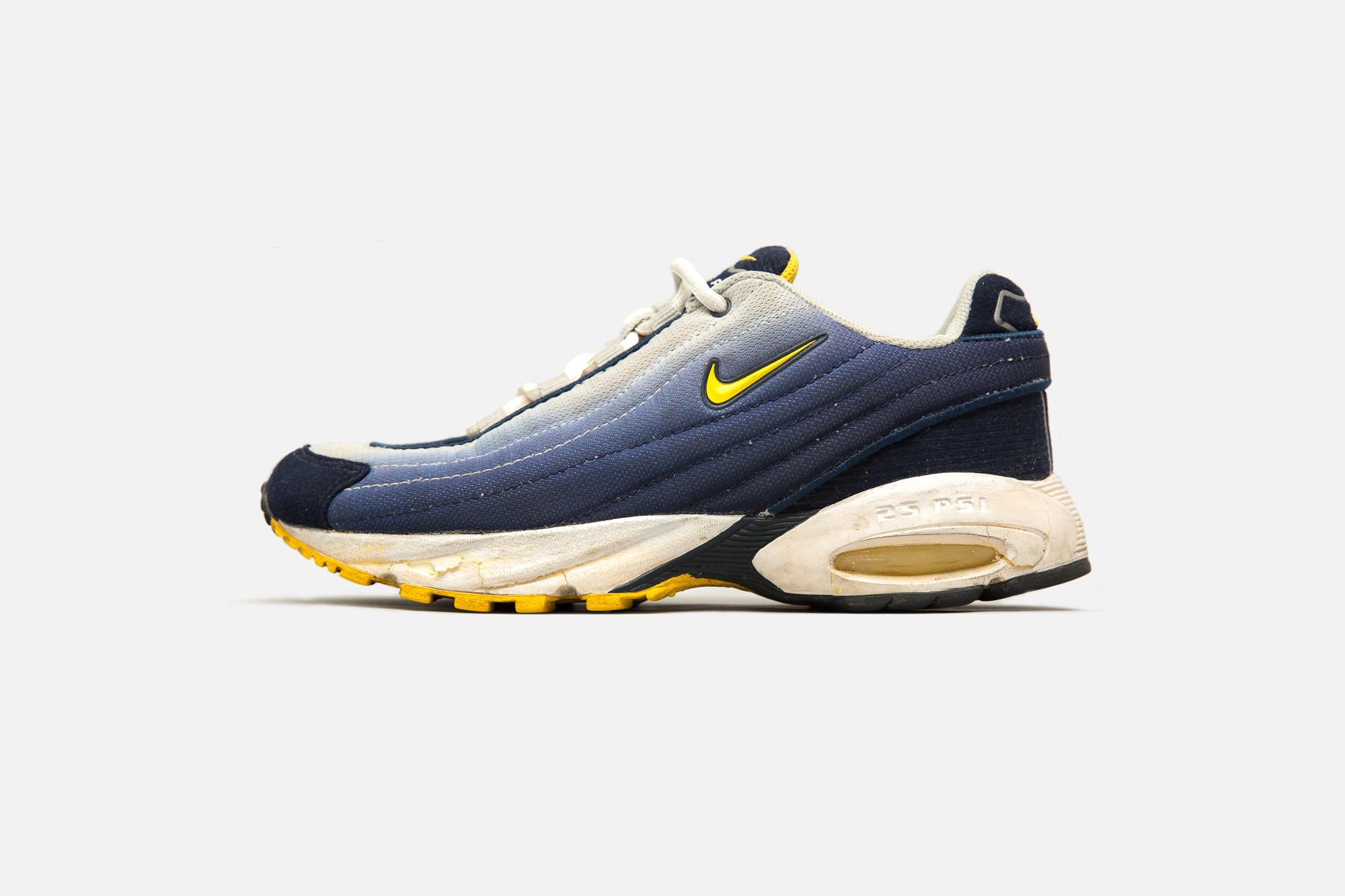 Nike Air Max Turbulence - 1999 An obscure release from the archives, the Turbulence isn’t one of those shoes that you see pop up too often. As with the Tailwind, the Turbulence changed form further down the line with the evolution of running, but this original version is still a headturner whenever it crops up online. One of it's nicest little details is the addition of the PSI measurement sitting above the midsole, detailing the amount of pressure contained within the unit. 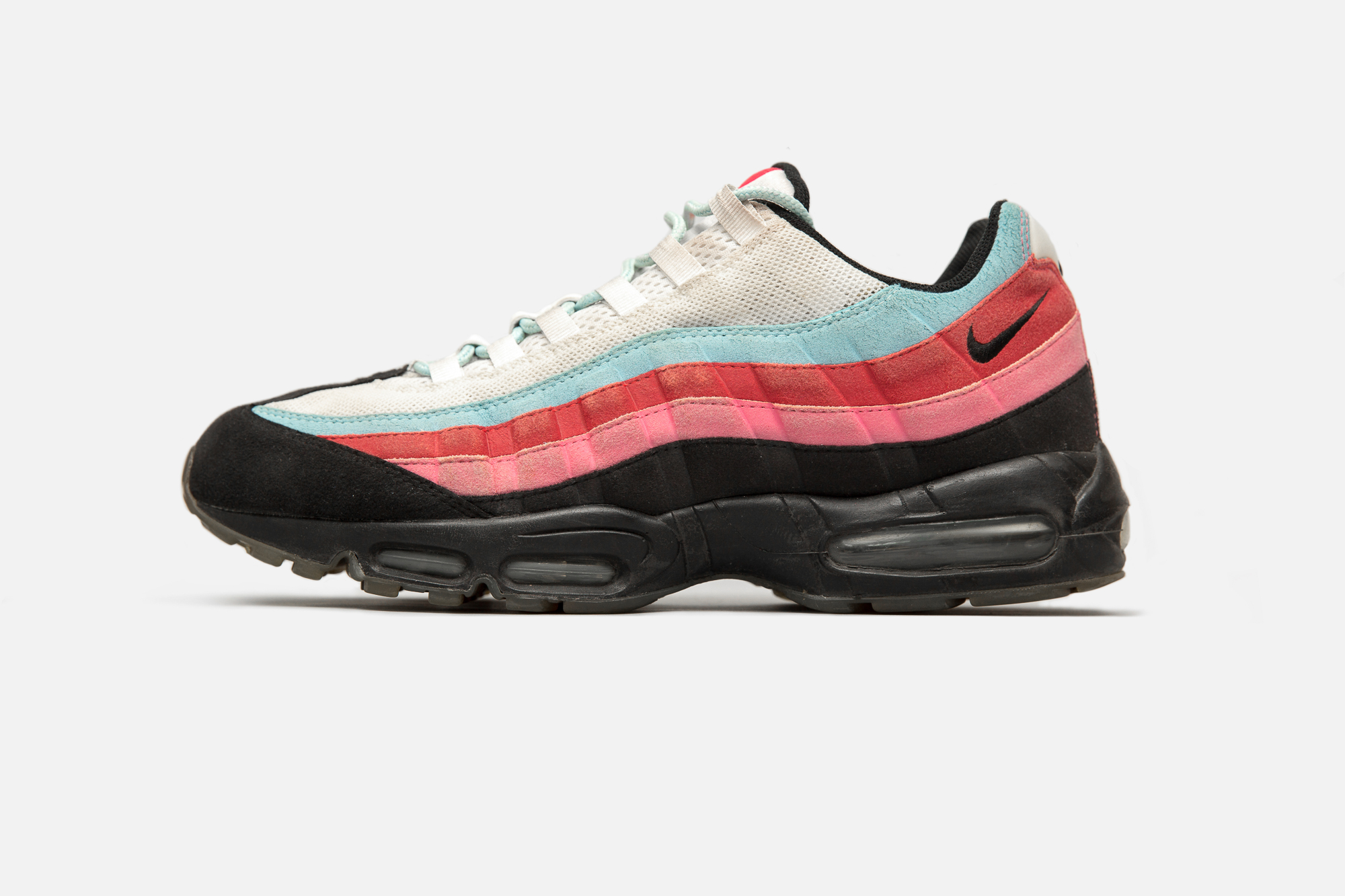 Parra x Nike Air Max 95 ‘Running Man’ - 2008 Dutch artist and skateboarder Piet Parra has always been a firm favourite in the Nike camp. Cemented in Nike history for creating one of the most acclaimed and unattainable Air Max 1’s ever, one of his often unsung shoes was his rendition of the Air Max 95. Using a monochromatic base together with pastel pink and blue, his illustrative rabbit graphic sat inside the clear outsole. At the time of release, there was also a matching Nike Windbreaker that bore the rabbit graphic wrapping around the body of the wearer. 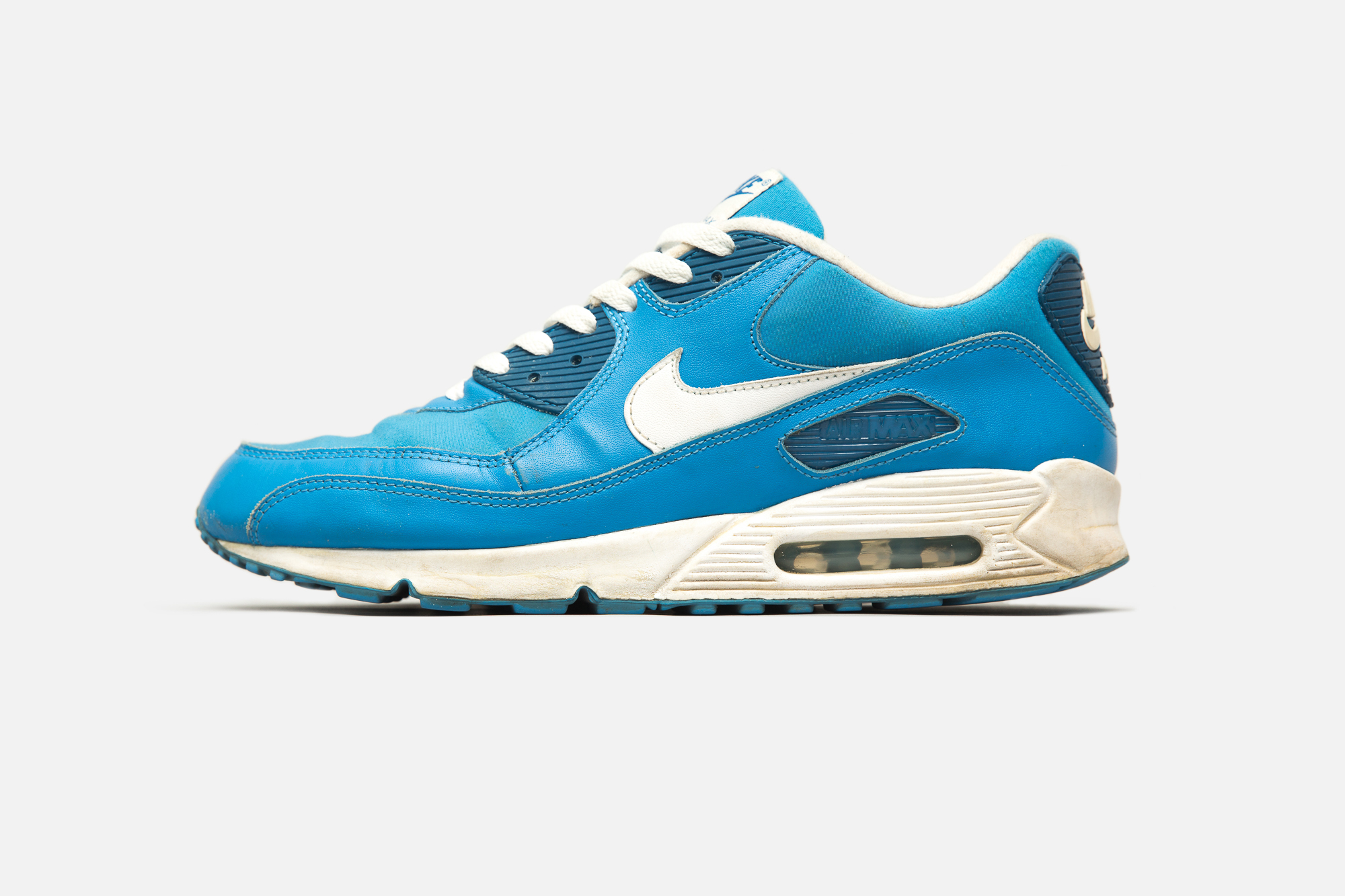 Nike Air Max 90 ‘Mr Fantastic’ - 2006 To honour the cinematic release of The Fantastic Four in 2006, Nike produced a special four shoe collection, with each release honouring the quadrant of characters. Alongside an Air Max 95, Dunk, and the infamous ‘Invisible Girl’ Air Force 1’s with the clear toebox, this Air Max 90 was fitted to Mr Fantastic’s specifications, although the premium leather uppers made sure they would never bend out of shape... 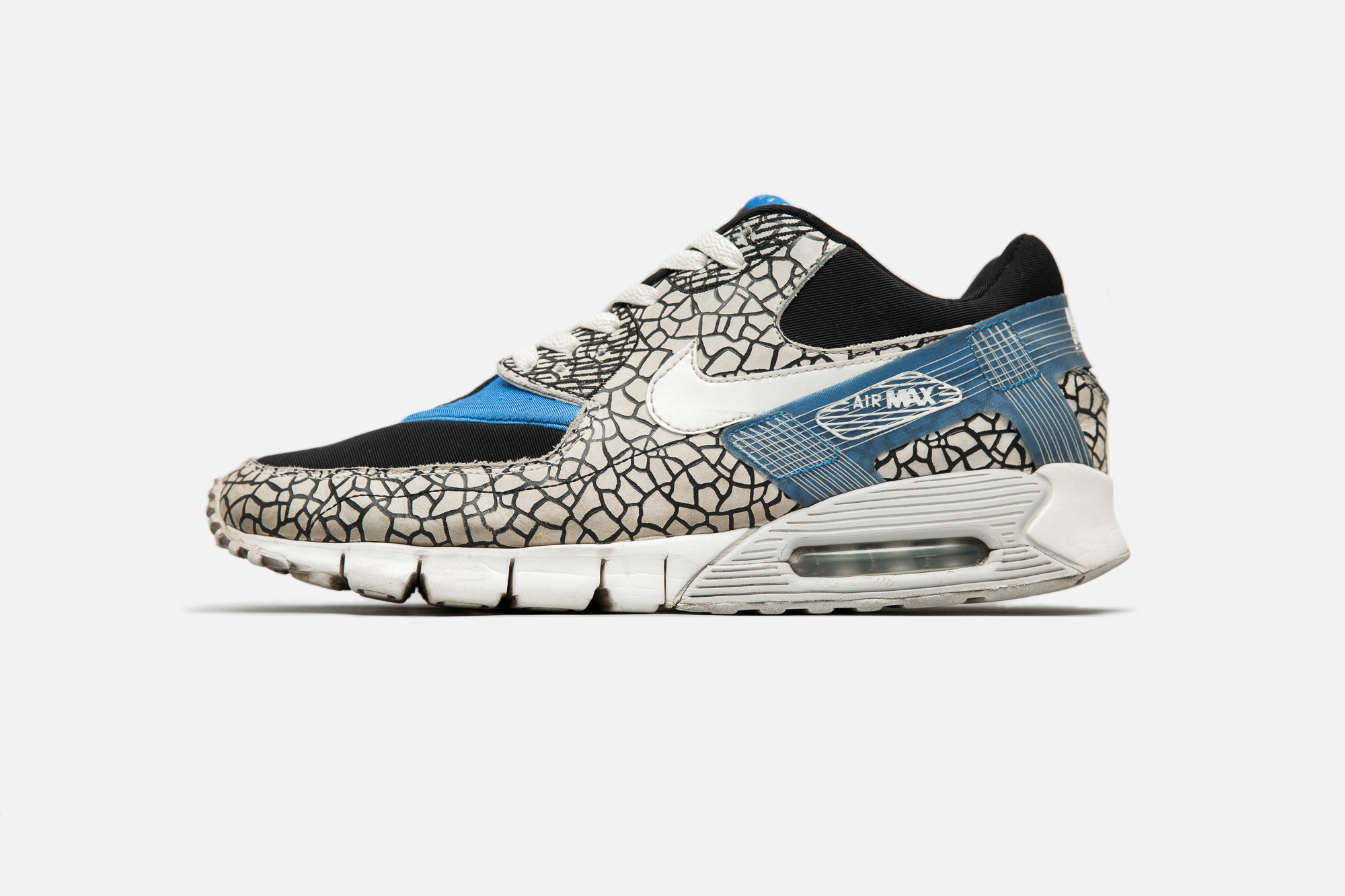 HUF x Nike Air Max 90 Current Huarache - 2009 Among HUF’s myriad of shoes they’ve worked on together with Nike over the years, this still sits at the top of many lists. Featuring in an East Vs West pack alongside the ‘Bacon’ rendering by New York OG’s Dave’s Quality Meat, this Hufquake reply married together characteristics from a couple of different shoes. The base model was obviously an Air Max 90, but the upper found itself fused together with elements from 1991’s Air Huarache. The nylon sock liner, prominent toebox detailing under the laces, and rubber label all pointed in the direction of the foot-hugger. 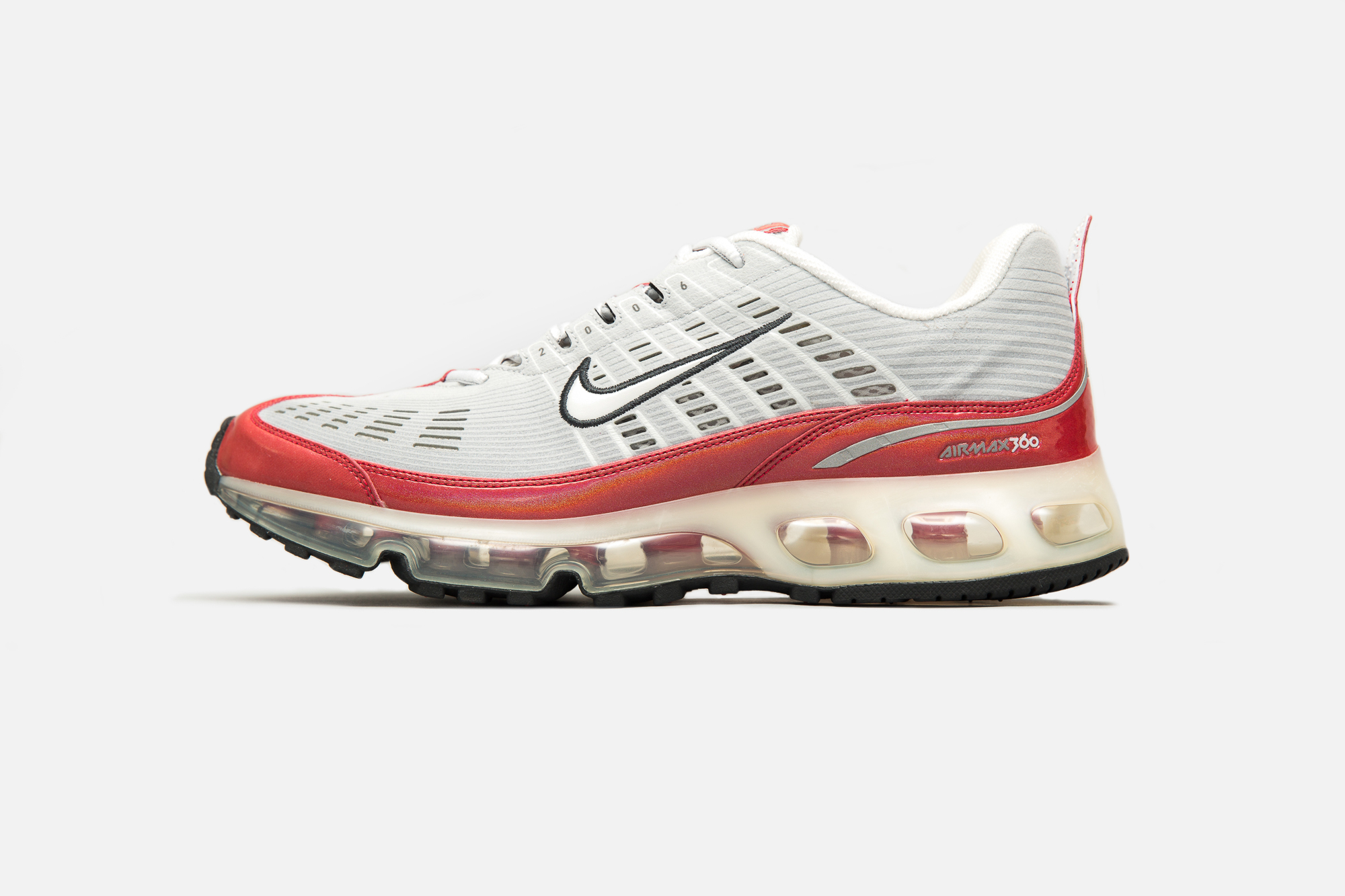 Nike Air Max 360 - 2006 Over its 30 years in the limelight, Nike's Air unit has gradually expanding underfoot to test the limits of comfort. 2006 saw one of the largest efforts yet in the Air Max 360, with the bubble expanding fully along the full length of the shoe. A similar amount of air could previously be found in the Air Max 97 and 98, but was even more prevalent in this latest release.

Nike Air Max 1 Even after 30 years of innovation and evolution, 1987’s Nike Air Max 1 in it’s original uniform still looks timeless in amongst the myriad of shoes we’re use to seeing release weekly. Tinker Hatfields wild proposal seriously paid off for the brand, giving wearers the opportunity to really see the technology at work underneath them. 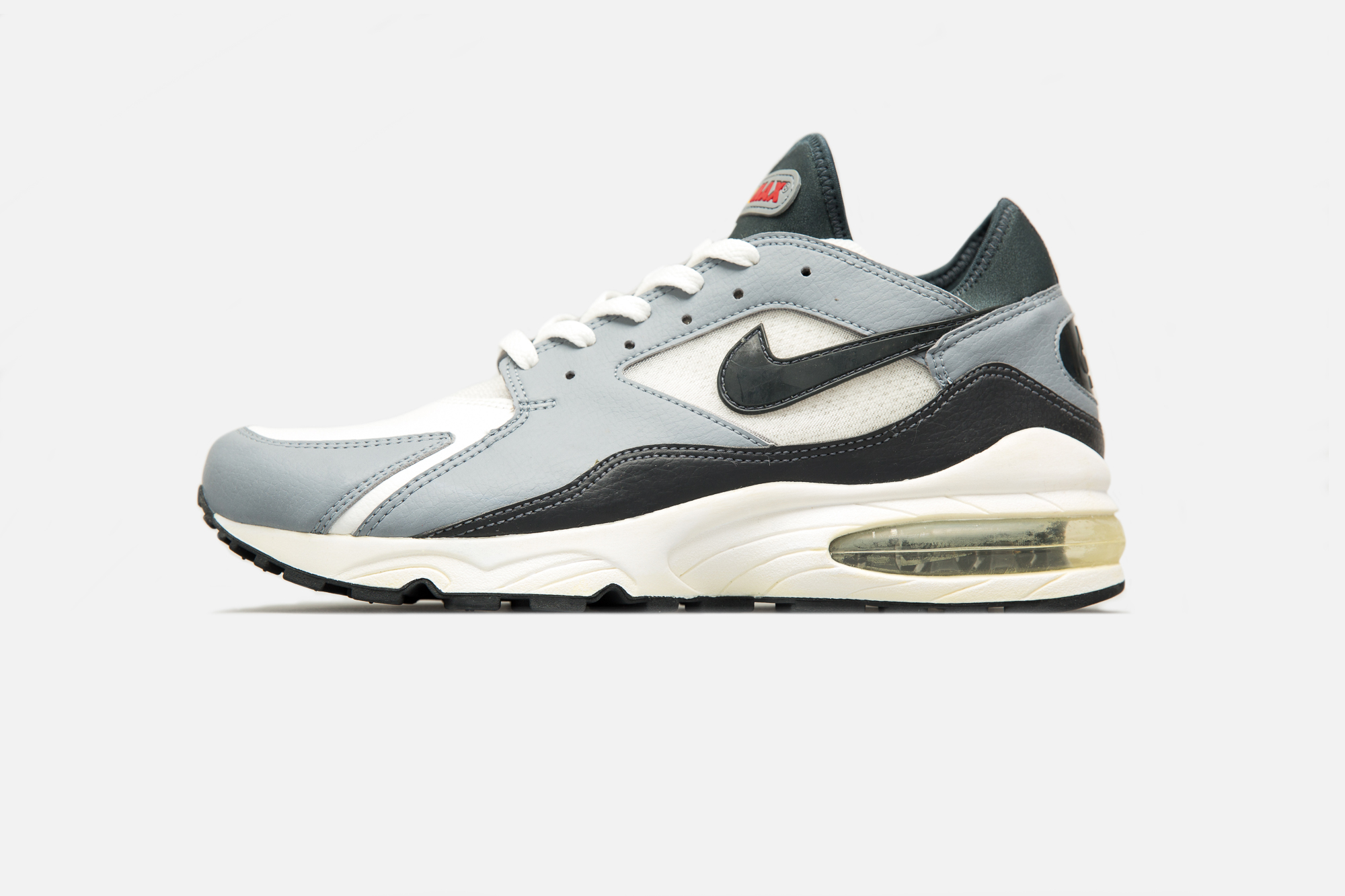 Nike Air Max 93 The Air Max 93’s most talked about feature was its large 270-degree exposed Nike Air Unit. The Air Sole Unit contained more air and therefore provided greater protection. It was manufactured using a new process called blow moulding, which involved gas being injected through an external tube that forced plastic into the mould. The Air Max 93 was the first to have a coloured Air Unit. Meanwhile, the upper featured a sock-like fit similar to the Air Huarache. 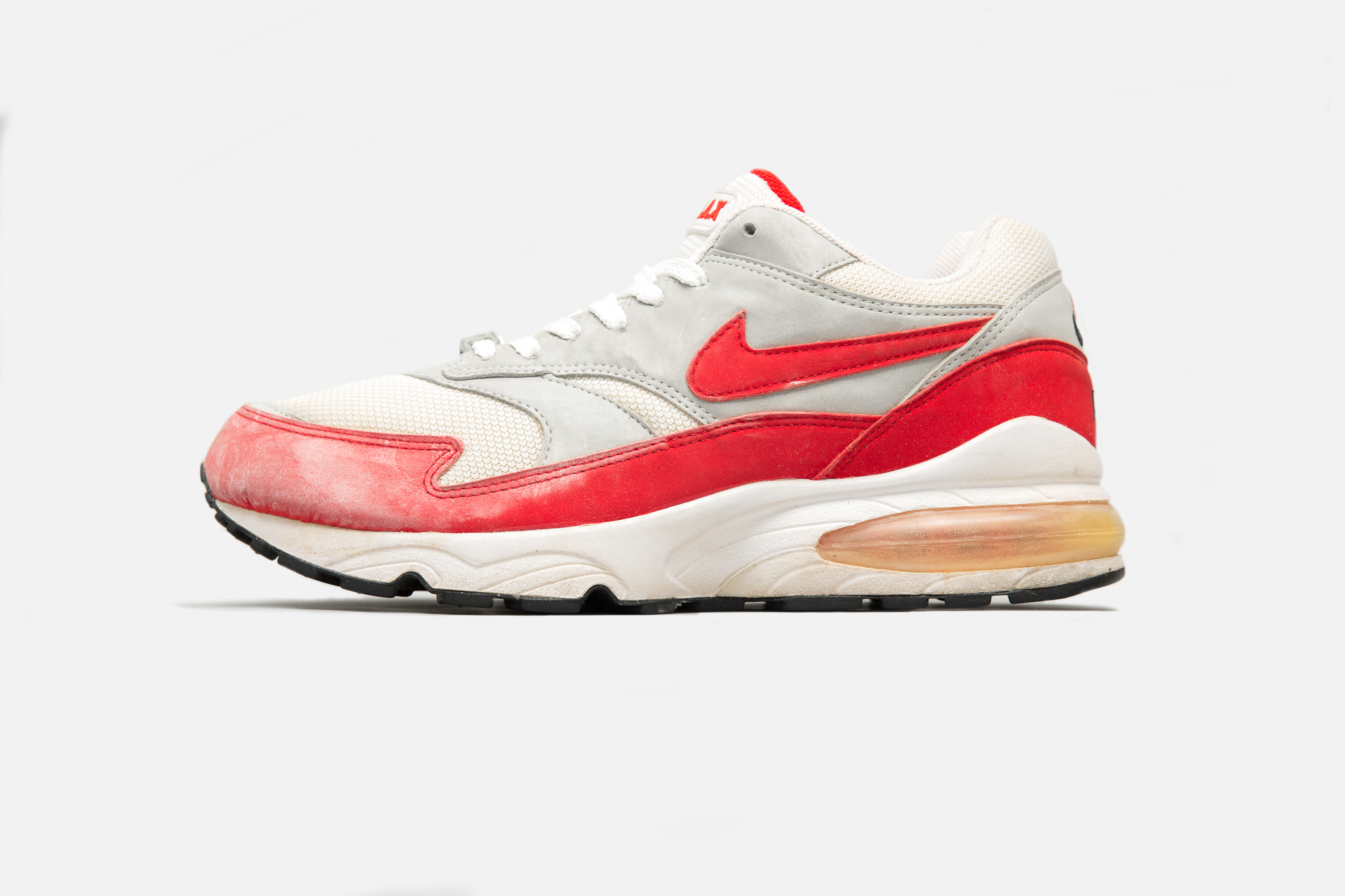 Nike Air Burst OG - 1995 Making use of the same midsole unit as the Air Max 93 & 94, the Air Burst debuted in 1995 with an upper that looked to take sensibilities from the original Air Max 1. Suede and mesh dressed the uppers, and even the colours found on this OG are a definite nod to it's ancestor. 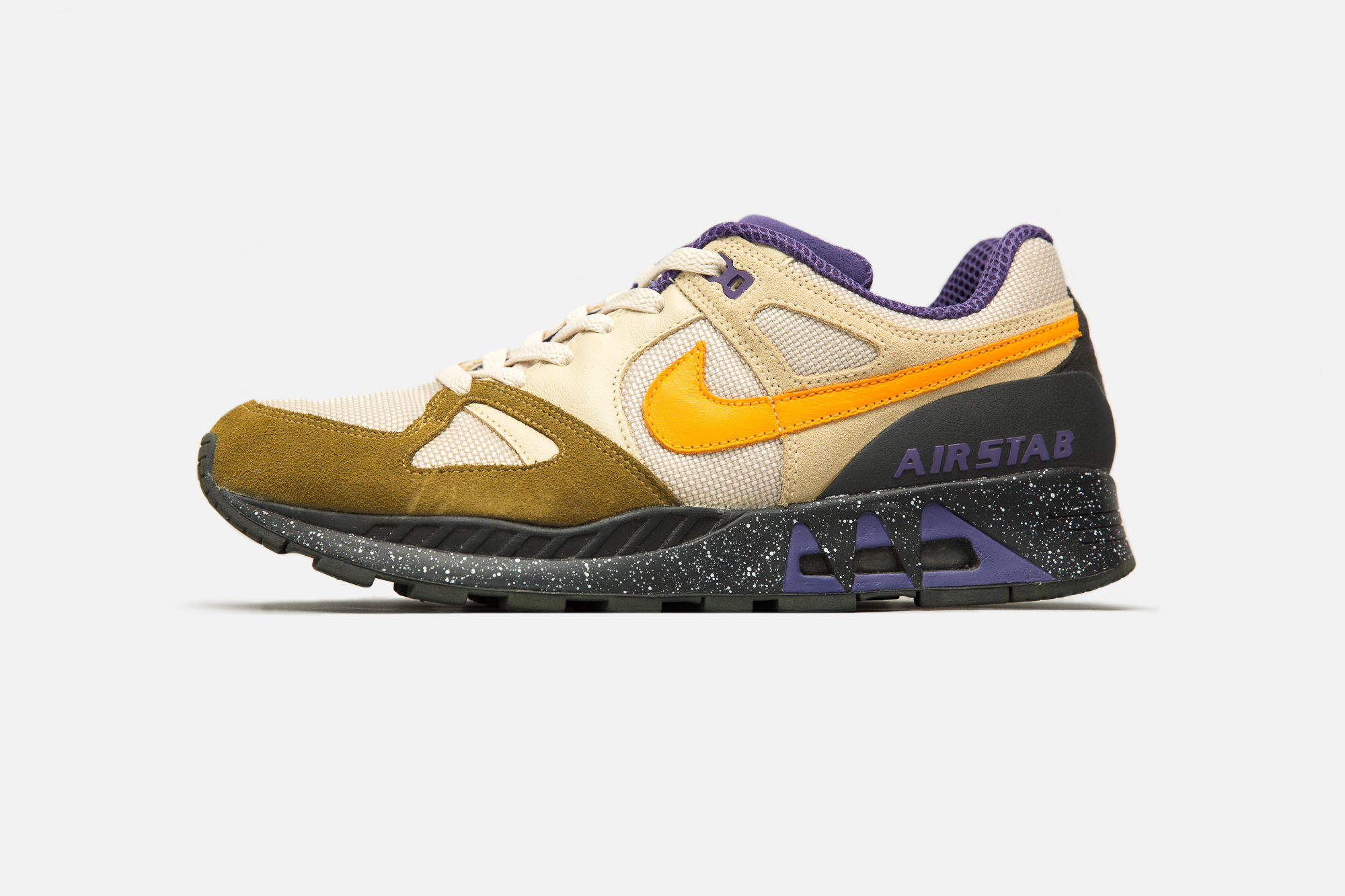 Nike Air Stab - 2006 Arriving in 1989, the Air Stab acted as a bit more of a bulkier cousin to other releases of the era. The eye-catching feature of the midsole unit was the jagged triangular shapes that crossed over the airbag. This version from 2006 draws inspiration from colour palettes found within the celebrated ACG range, using earthy tones and deep purples alongside paint speckled midsoles. 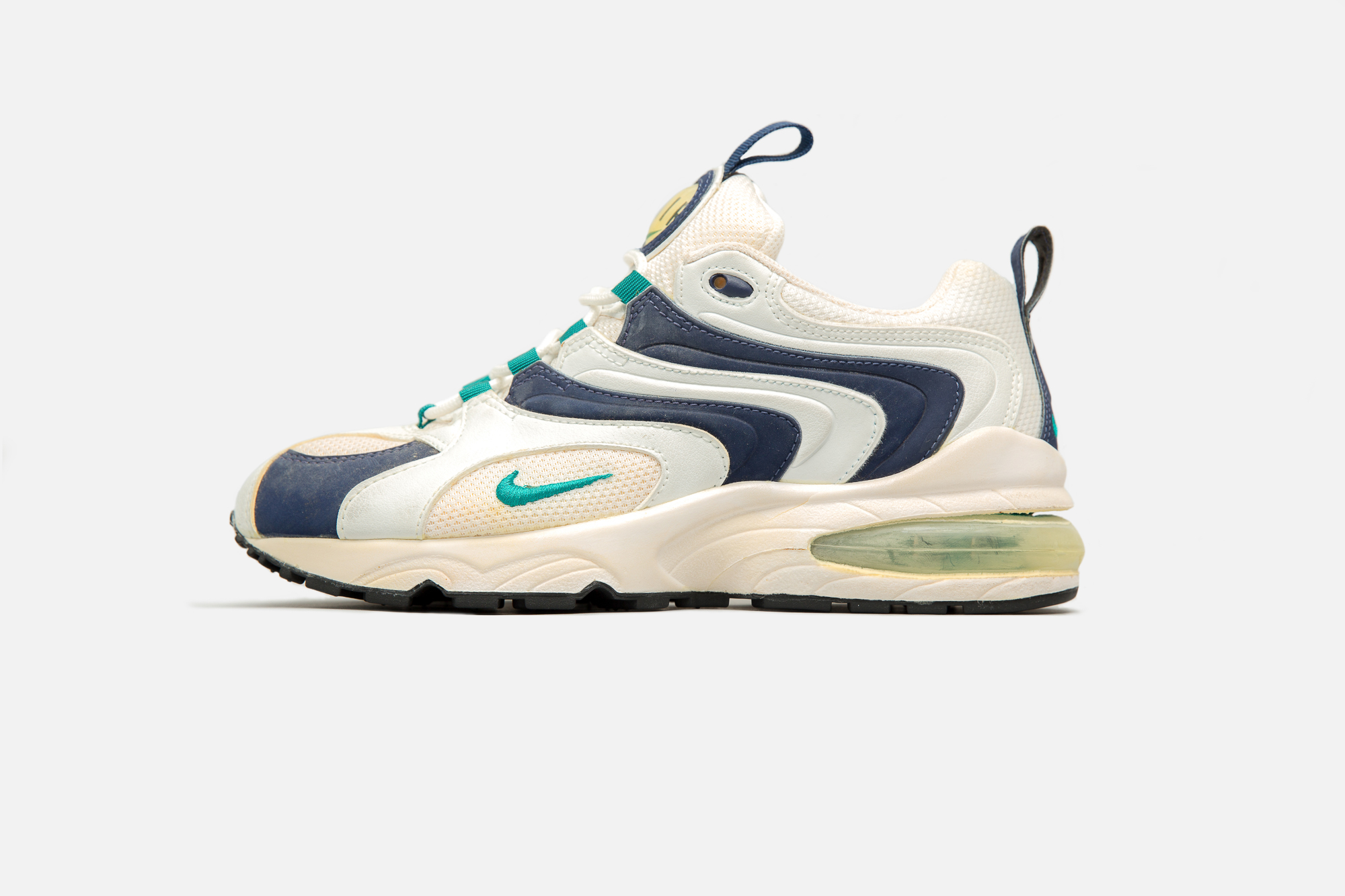 Unknown Model - 1996 This is one from the archives we're struggling to find any information on. We're thinking it's probably a women's rendition of another Air Max style due to the Burst midsole that sometimes gets used when shoes get scaled down for the ladies. The ghilly lacing system was a classic design feature from the Air Max Triax series from the same time period so it might be some obscure release from that collection. Answers on a postcard please! 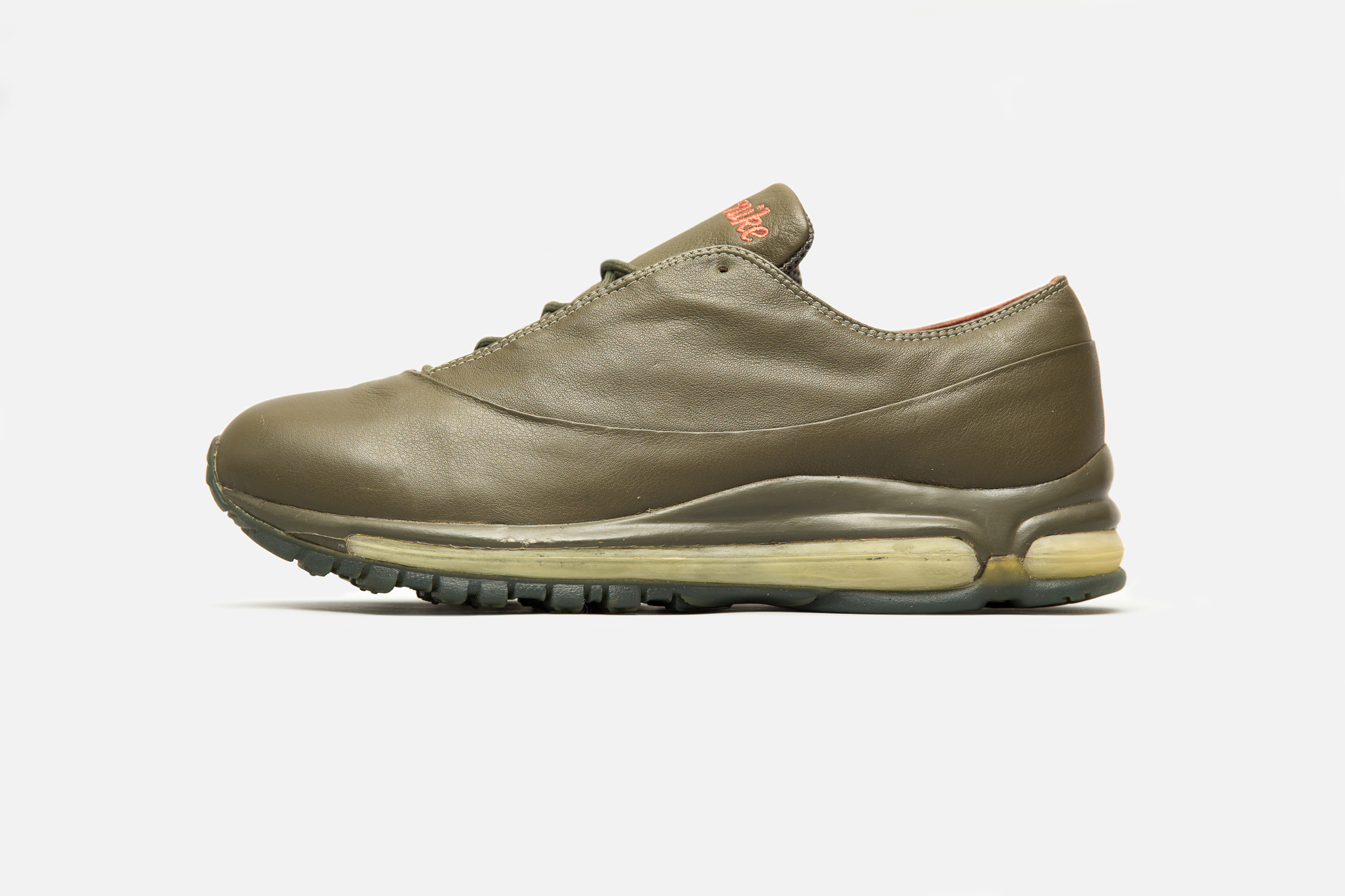 Nike Air Max Sentry Low - 2000 Another obscure one from the stash, this one is a blend between both sport and lifestyle. Using the aggressive midsole unit from the Air Max 97, a full leather formal upper was added in for more of a casual approach. It's one we've certainly never seen outside of this building, so if anyone has anymore info let us know! 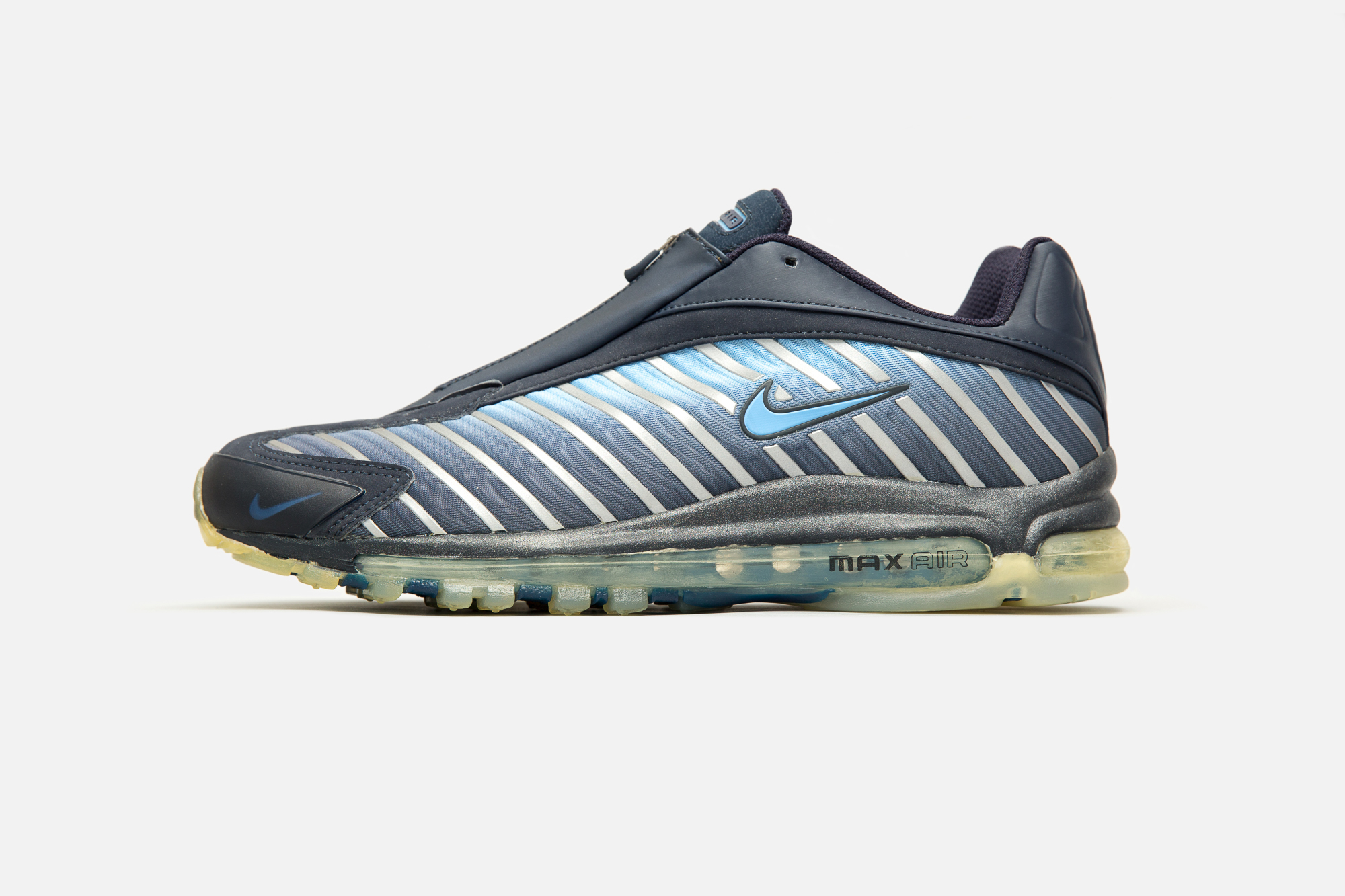 Unknown Model - 2001 The third and final unknown shoe from our collection is this beast from 2001. Once again the Air Max 97 midsole sits as a foundation, made even more prominent by the clear outsole and 'MAX AIR' branding on the bubble. The lacing system is concealed with a zip-up cover that runs up the dorsal, and reflective strips run along each sidewall all the way up to the toebox. There are definitely stylistic references to 'Tuned' shoes of the era that had a much wilder appearance than others during the turn of the century.