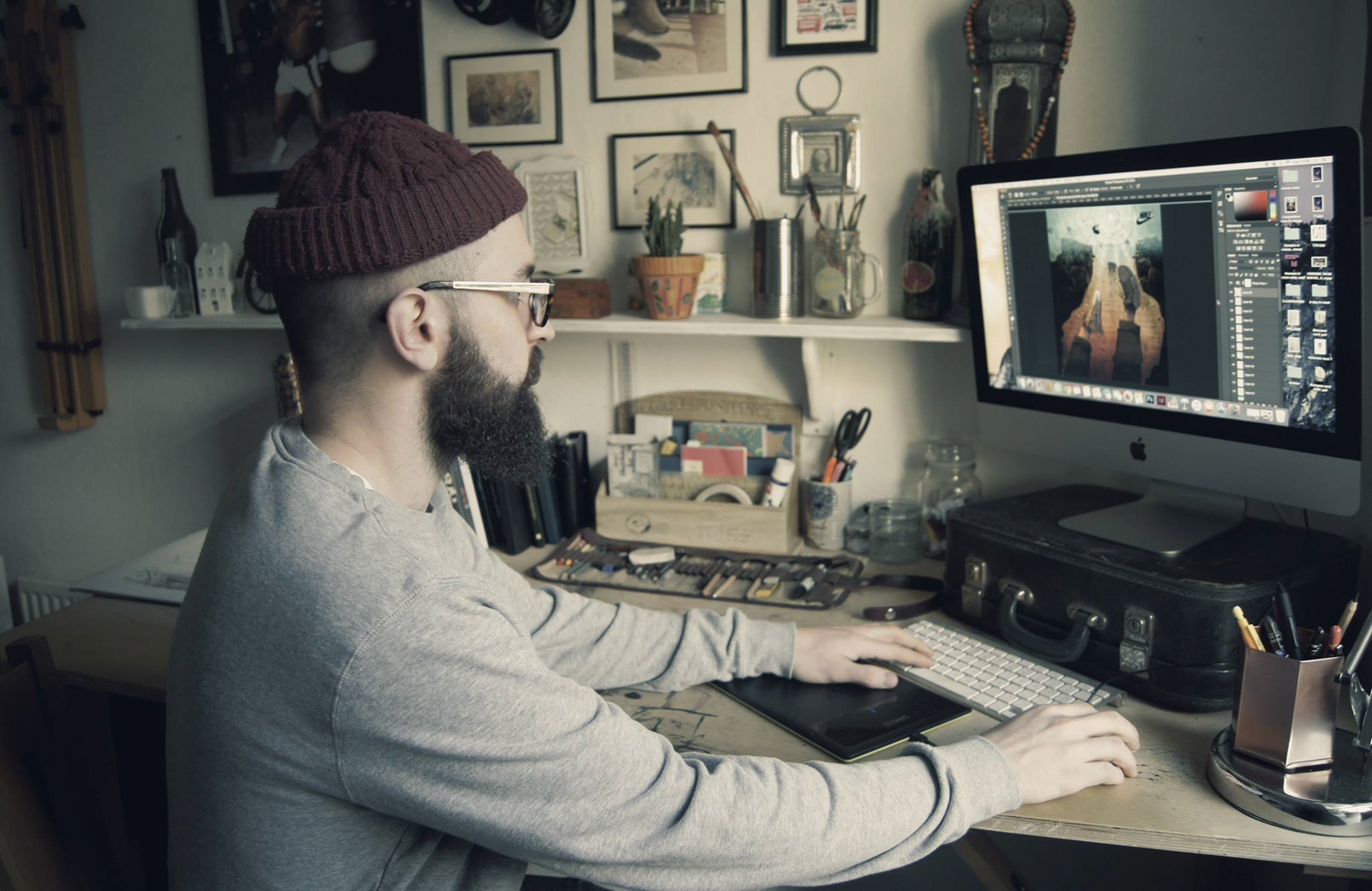 Changing things up a little for our latest '5 Minutes' feature, we sat down with Scott Wilson, a staff member from our Plymouth store who's also an impressive illustrator in his own right. We spoke to him about his creative process and his recent series of illustrations that capture trainers featured in movies, reinterpreted in his own distinctive style. If you'd like to start by giving us a bit of an introduction into how you first started out in illustration. I've always had the urge to draw pretty much anything and everything. I guess it stems from not being to express myself growing up, I used drawing as a get away. I still do now, but on a more professional level rather than in my school text books. After my A levels, I took an Art Foundation course in which I found illustration, I was never really sure what I wanted to do as a “career”, but I loved to draw and be creative, so I decided to go to University, graduating with a BA. Your technique itself is really interesting, combining hand drawn elements together with digital. Could you talk us through your process? Most of my illustrations start from a little doodle out my sketchbook, I then develop this into thumbnails (small quick drawings) and then into actual visuals, developed sketches that stem from the thumbnails. I then take my visuals and draw up my final sketch, drawing each element on individual pieces of paper, scanned in to the Mac, which is then assembled together in Photoshop. I find that this gives me a lot more freedom with my illustrations, sort of like a jigsaw puzzle and I have to put the pieces together to create the final image. Sometimes this isn't the case at all, and I'll draw up the final sketch, scan it in, and add colour depth and texture on photoshop, it all depends on what I want to achieve with each illustration. 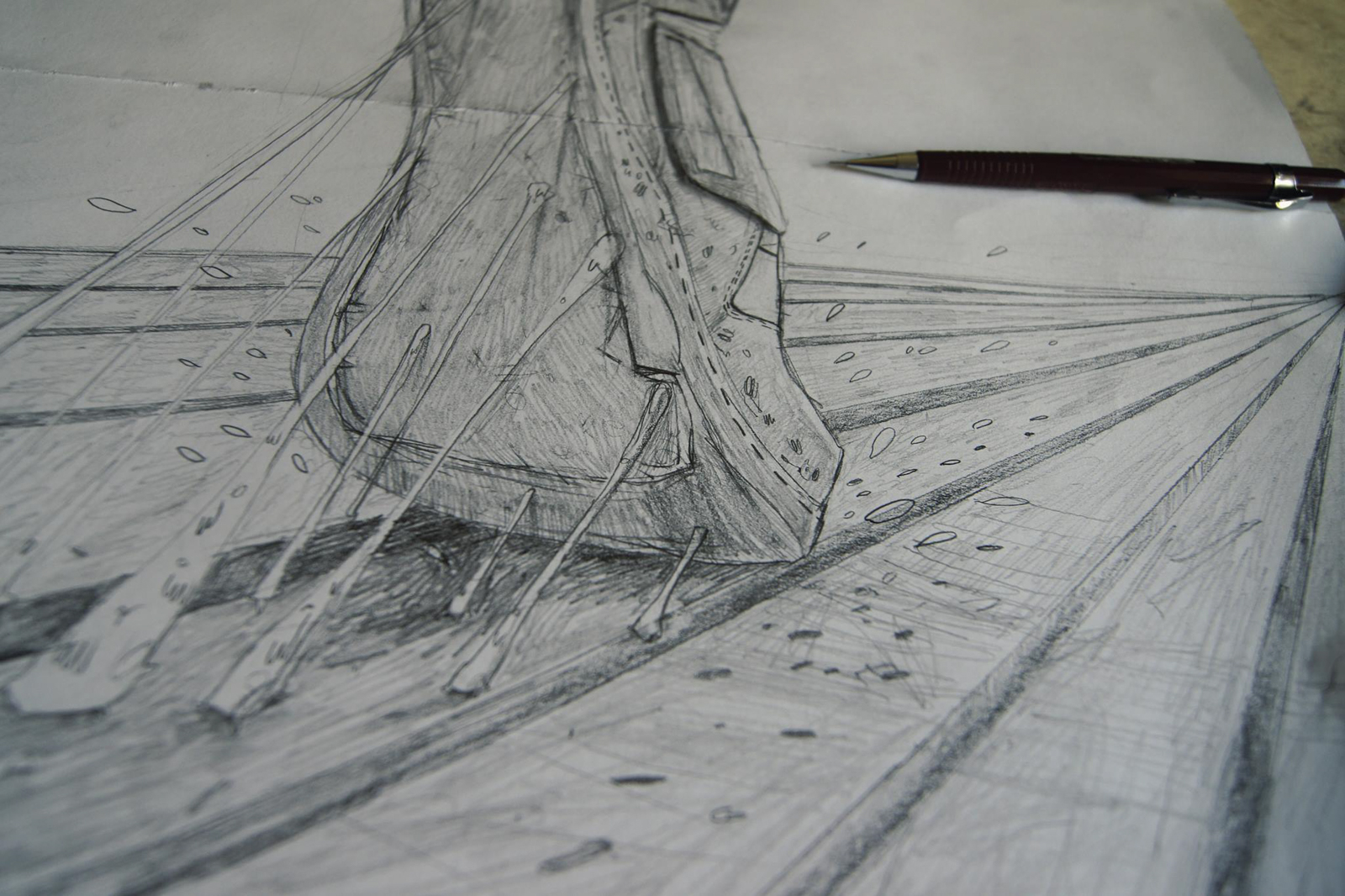 Tell us a bit about your Fneakers series. Growing up in the Wilson house hold we watched all of these films together, I can remember my father taking me, my brother and sister to the cinema to watch Space Jam and just being so excited. Like all of these films, it brought back memories of my childhood. I also took an interest in footwear and trainers as I got older. I'm no 'Sneakerhead' in so many words, but I do love trainers and just footwear in general, so I wanted to create illustrations that brought these two loves together. I was also very inspired by my work colleague, I discussed what I had in mind and we are a real creative bunch, so its always nice to hear their opinions on my work. 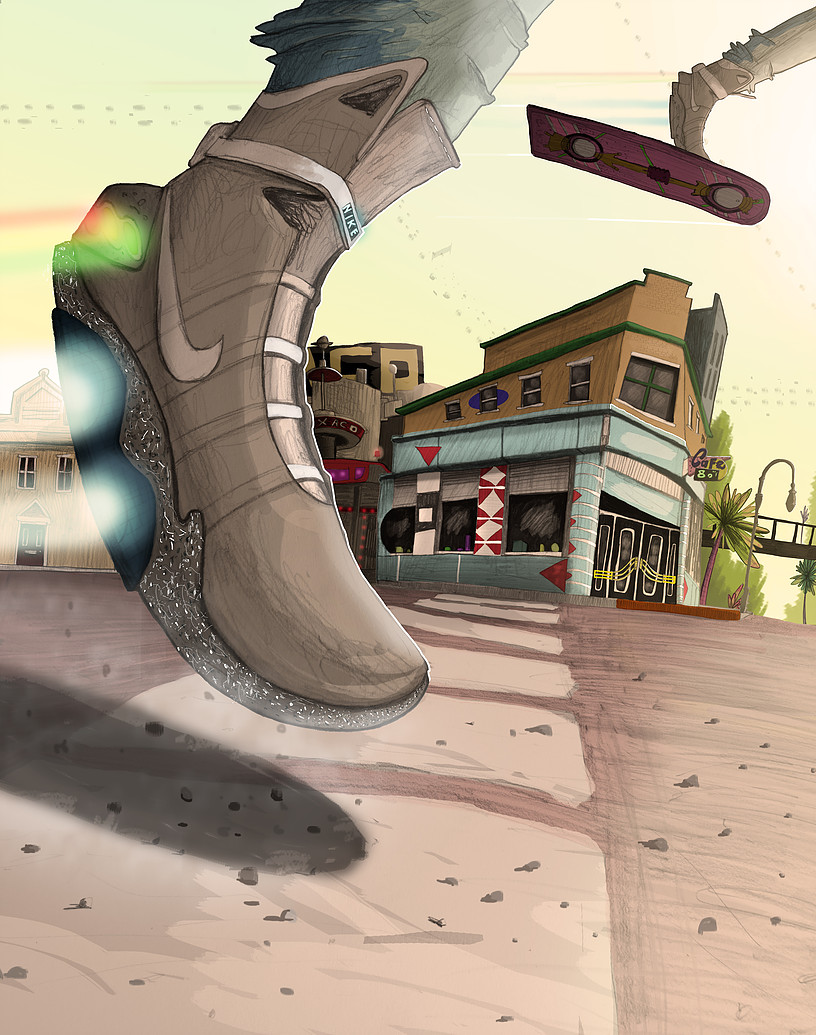 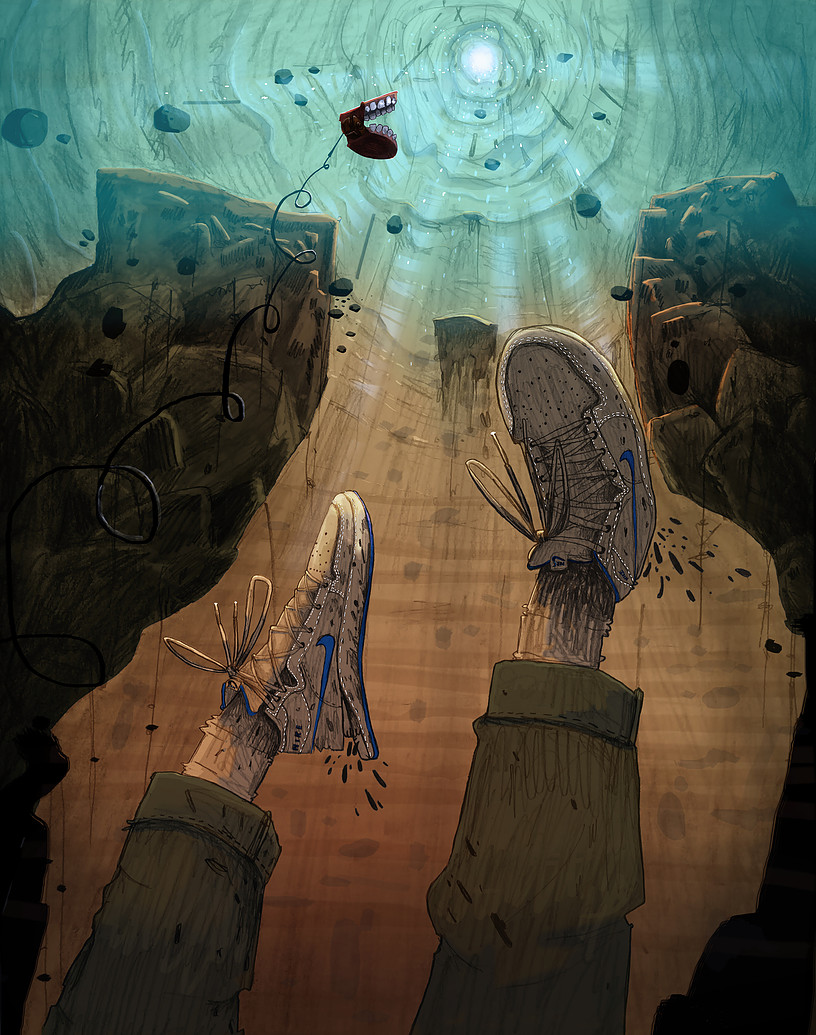 I really like how you've created your own interpretation of a camera angle from a movie. Does this require a lot of experimentation in terms of working out the perfect viewpoint. When creating my illustrations I have a story in my head, and I try to capture the pinnacle moment of that narrative. I sketch my ideas down until I have got the right angle and composition, developing that sketch into a final illustration. I keep on drawing until I am happy with it, this process could last hours, days or I may even get it straight away in the first few sketches. That's why I love drawing so much, its the full development of an idea that blossoms into a final illustration. Do you have plans to depict any more sneakers from films? I do, there will be a second series of illustrations. I'm still in the early stages of development but they will be released this year at some point. 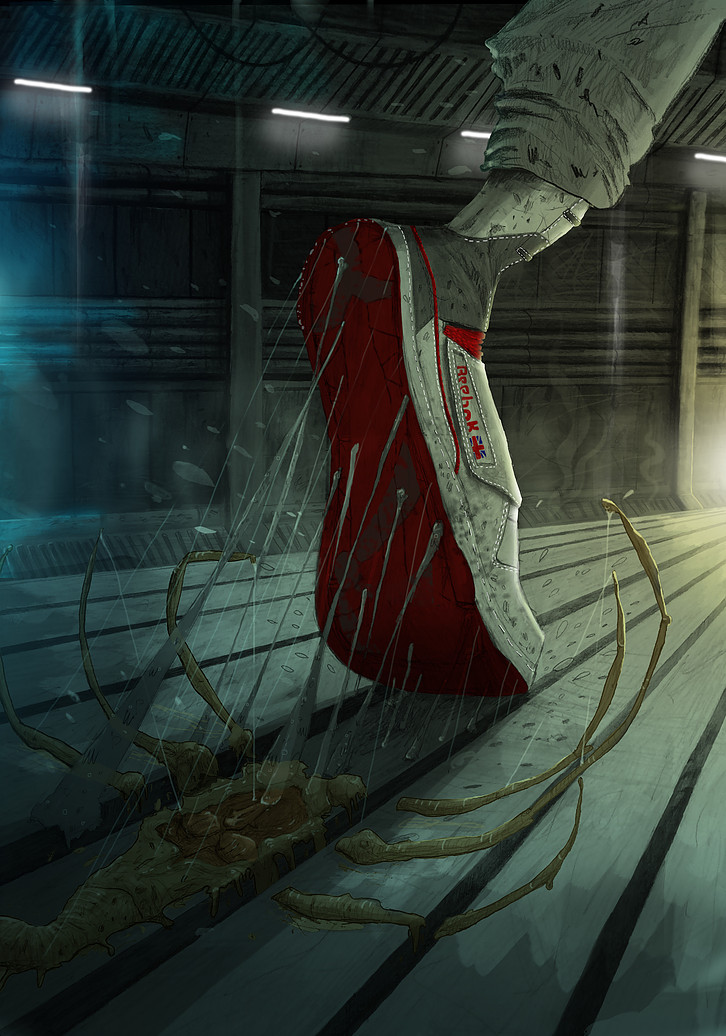 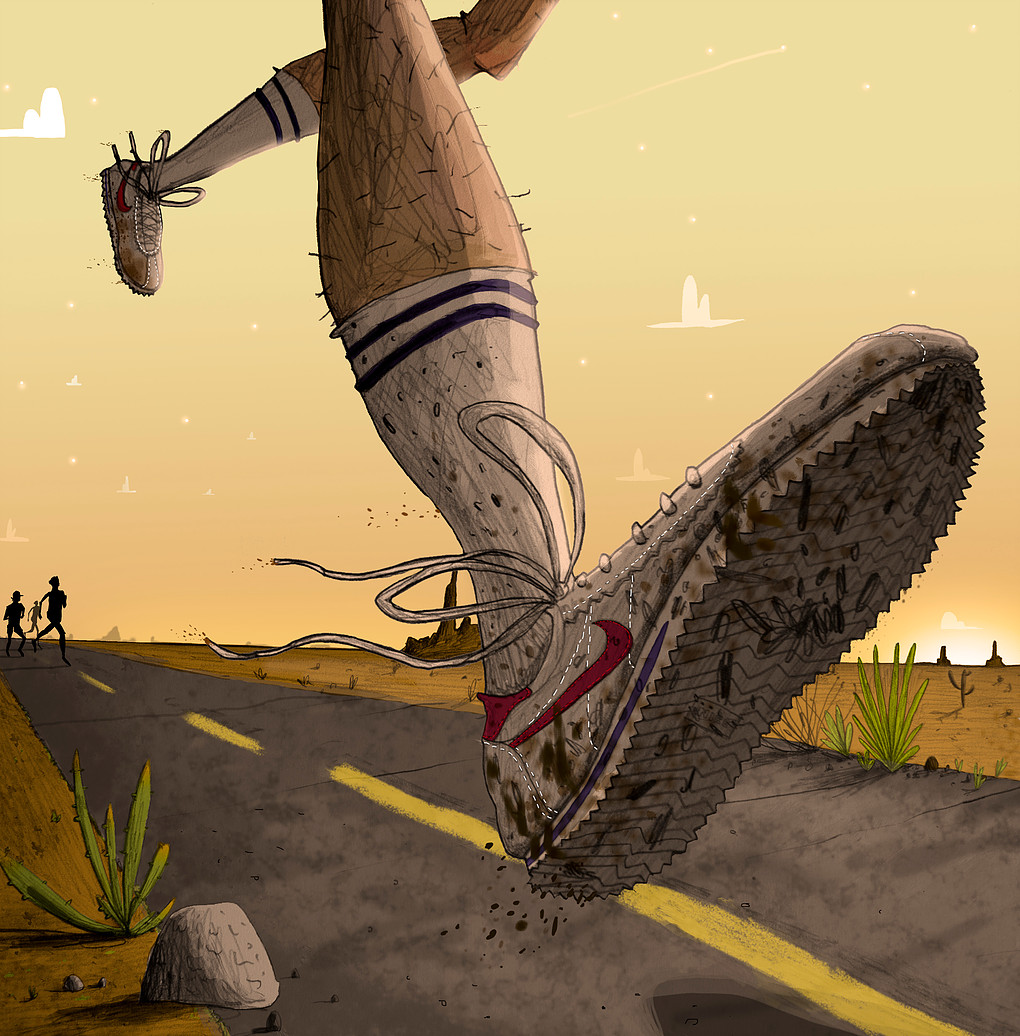 Exaggerated perspective seems to play an important role in these images, is this something that you find carries over into your other personal work? It all depends on what I am trying to portray, as my style is developing all the time I do find myself creating more illustrations that have somewhat of an exaggerated perspective. Where would you like illustration to take you in the future? Any goals you've set out to achieve? To a unicorn playing a Sega Mega Drive, that would be awesome... I like to be, ambitious! It would take me months, even years to find that unicorn but I will keep looking and strive for success. Apart from playing video games with a unicorn, I like to keep myself open to new possibilities, but I would love to work with an artist that I look up to and who inspires me on a collaborative piece. 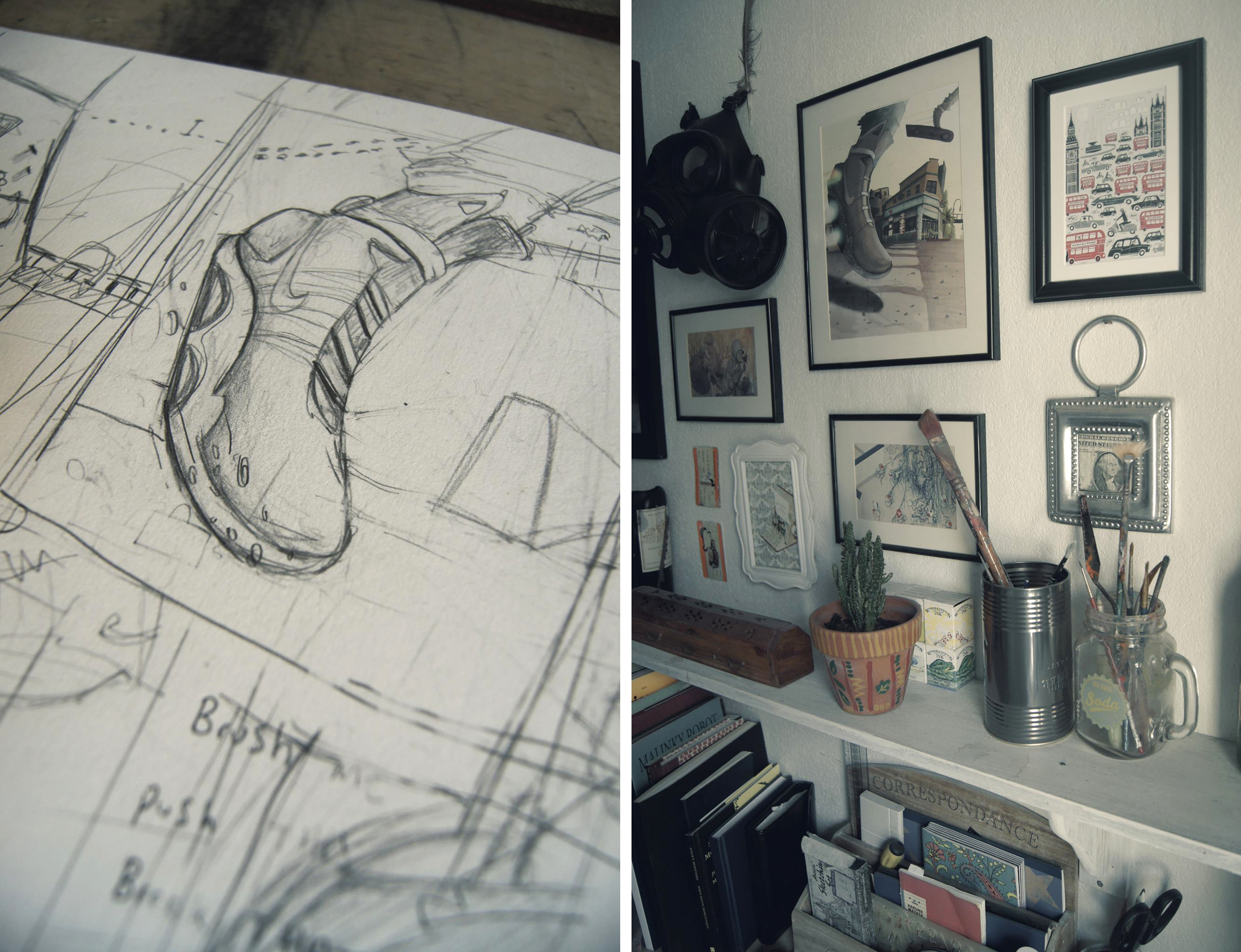 I feel like your style doesn't follow the recent trends of digitally tracing from an existing photograph, is this something you actively try to avoid or is it just not your style in general? I don't understand why an illustrator would want to trace another photographers work and claim it as there own? I guess that is a different discussion together, its not in my style. I like to be true to myself when it comes to creating my work, combining traditional and modern methods. Are there any artists or illustrators you feel drawn towards, or feel inspired by? I'm inspired by so many artists and illustrators, the likes of Shaun Tan, Oliver Jeffers, Tommy Parker, Justin Bua, Sam Rowe and Naomi Batts. They all have really unique styles and I love their work. Do you find yourself encountering many creative blocks along the way? I would be lying if I said no, some days I will sit at my desk and sketch so much, but there would be a little something missing from what I've drawn. On the other hand I have learnt to almost love those creative blockages more than the days where I sit down and get the drawing correct first time. Its all about the process for me, If I sketch something up the first time and I love it then great, but if I have a day of not being able to capture that moment on paper then it doesn't matter, because I know it'll happen eventually. 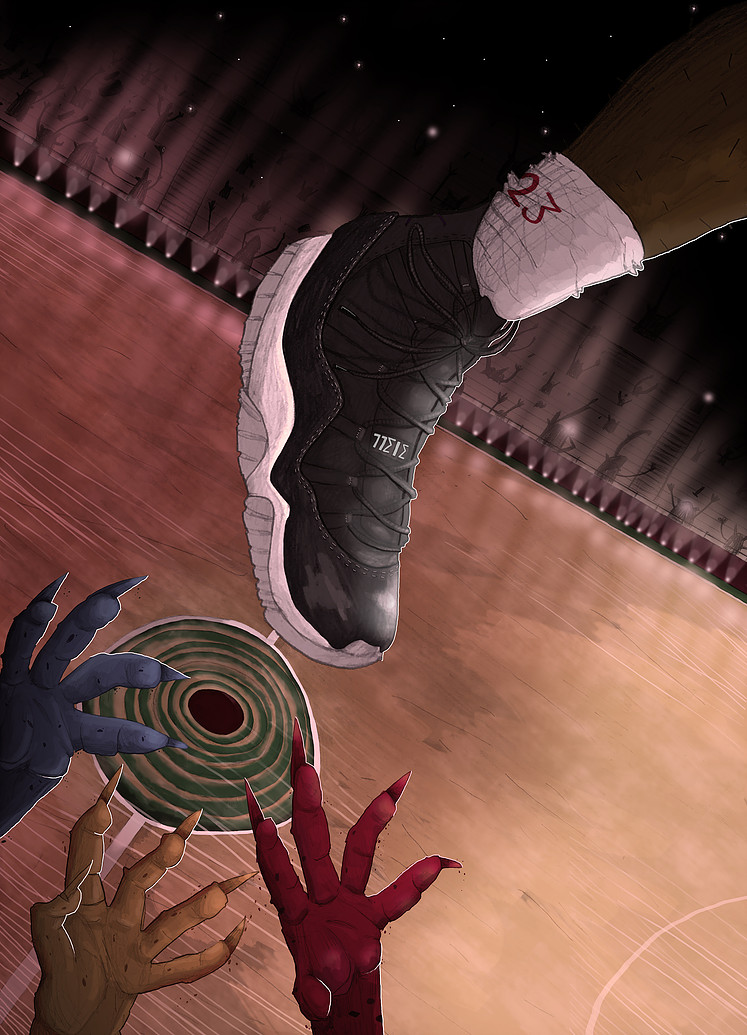 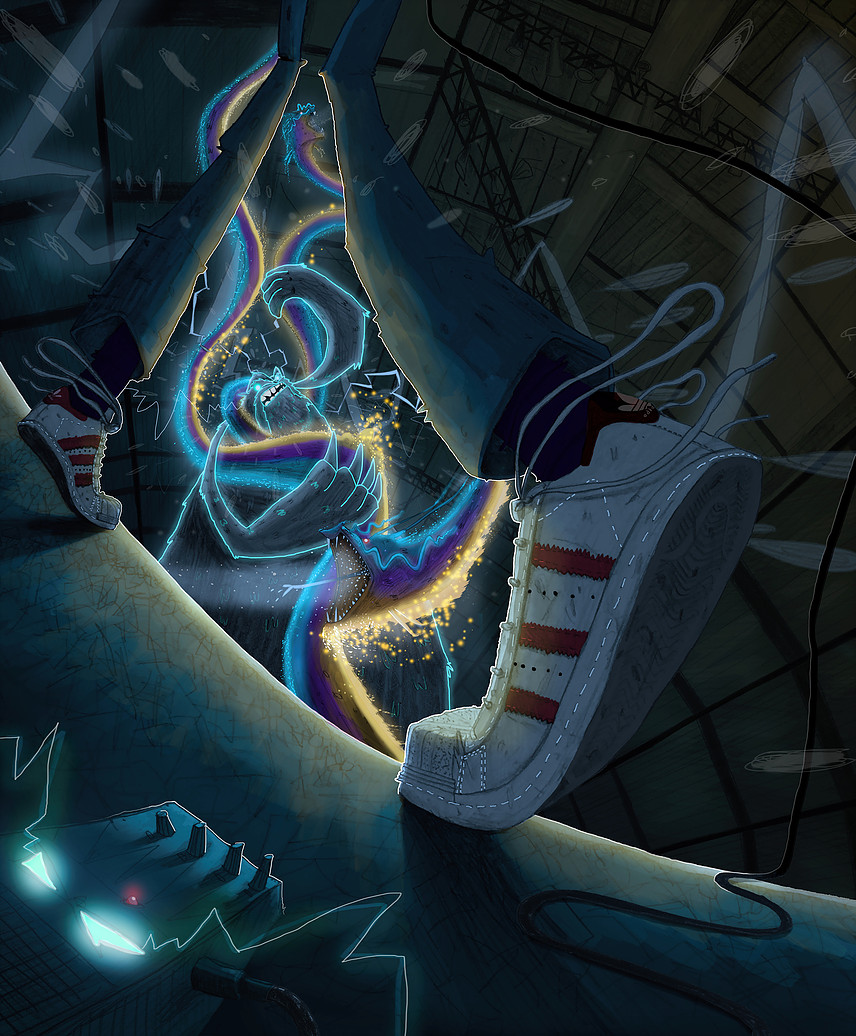 Does this push you to come up with new ideas or do you tend to work in a fairly organic process anyway? I usually just stop with what I am working on and go do something else. I like to draw outside, so taking my sketchbook and going on an adventure usually helps with these creative blocks. There's so much to see outside and so much to be inspired by. I could be drawing something completely random and ill just get an idea in my head that relates to the project I was currently working on and I'll make a little note or a little doodle in the corner of my sketch book and refer back to this when I get back to the studio. Any current projects you're working on at the moment that you'd be happy to tell us a bit about? Well I have a few projects I am currently working on that are overlapping one another, but most importantly I'm in the planning stages for a solo exhibition which will be early next year at Studio102 in Plymouth. That's all I can say for the time being, but if you're interested you can keep always keep up to date with what I'm getting up to via my Instagram and website. 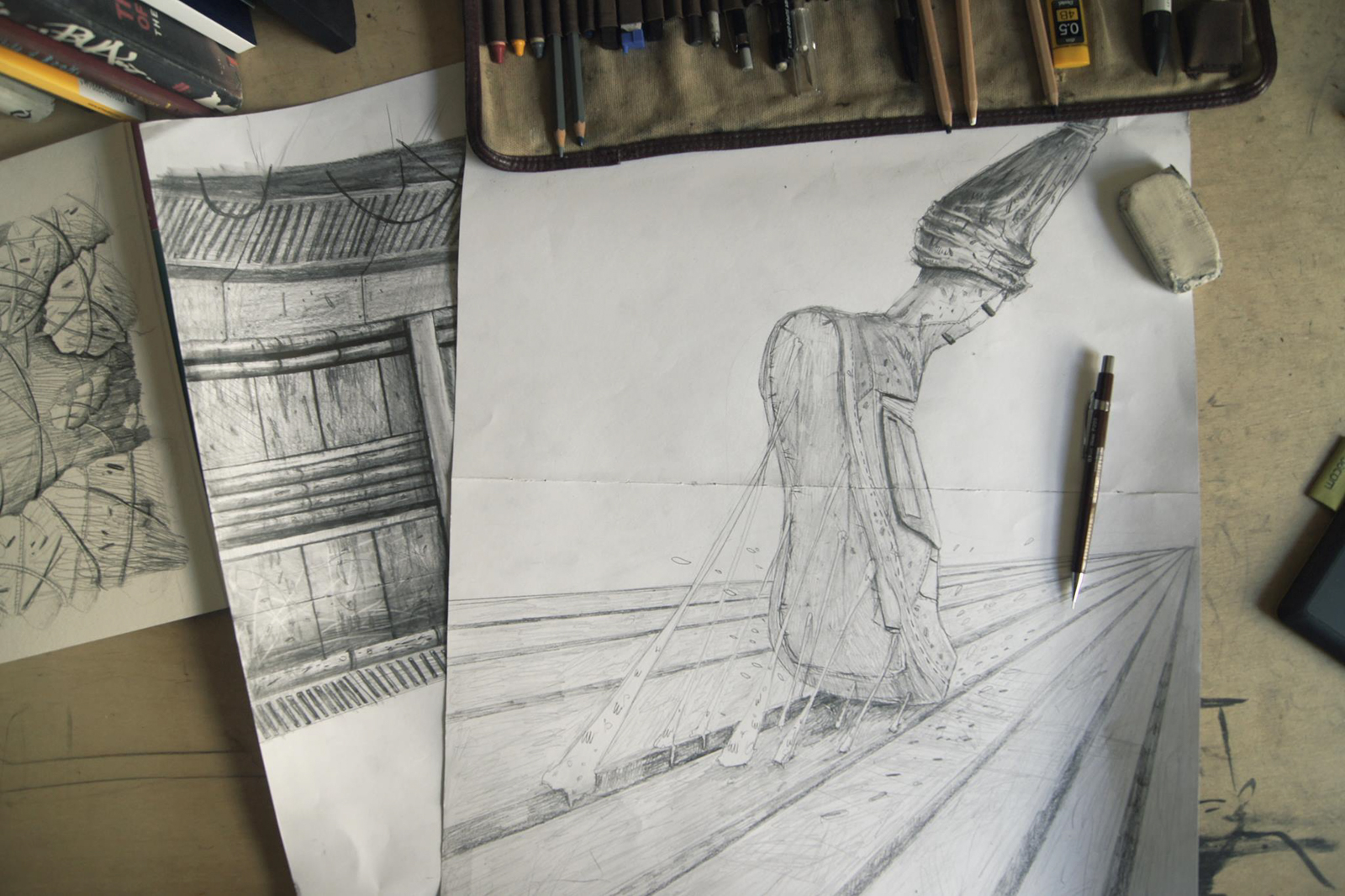