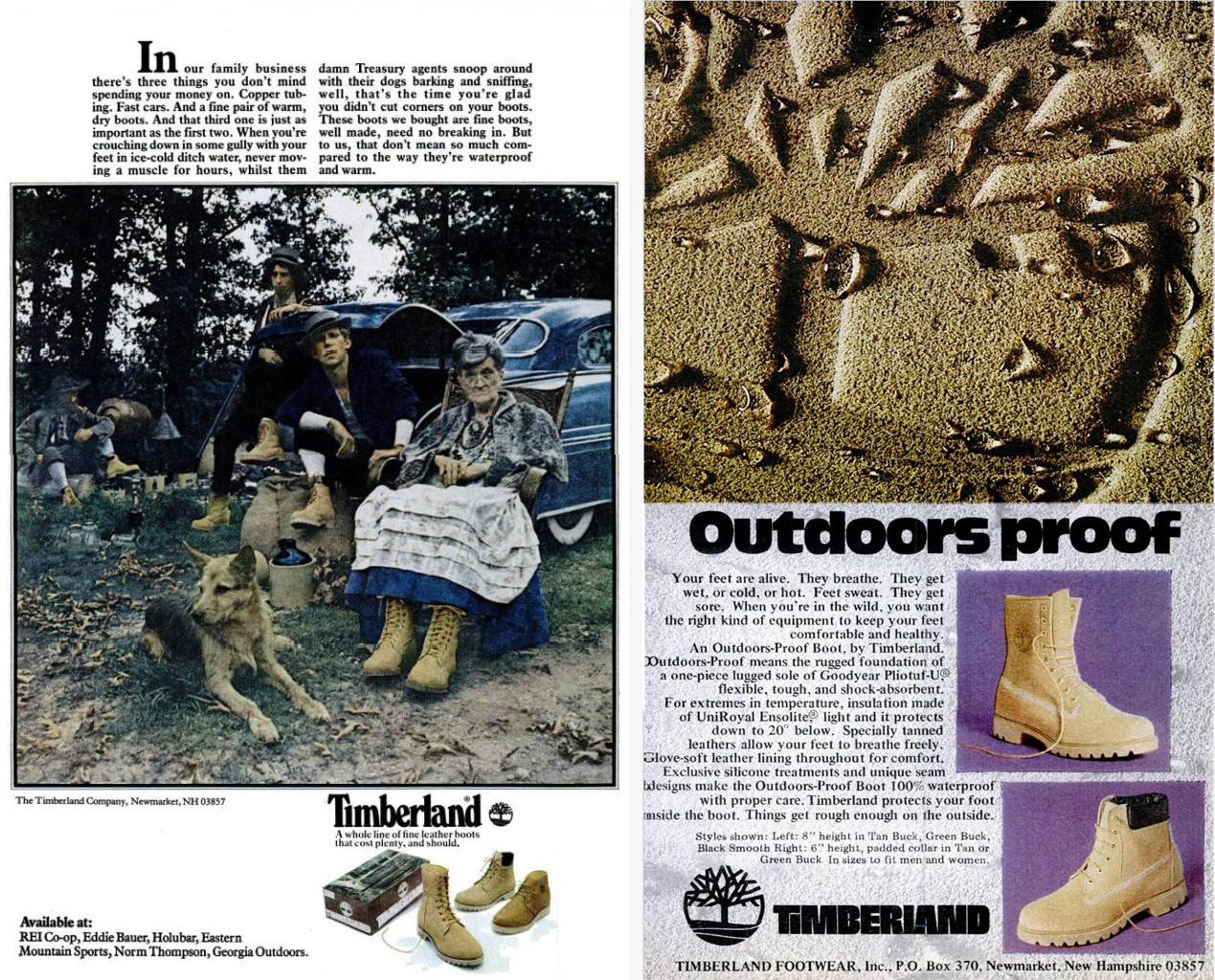 The reinterpretation of certain items of clothing is an inherent part of street fashion, and has become an aspect of the lifestyle that has helped define whole subcultures across the decades. There's no group of fashionista's more style conscious than the hip hop crowd, who've taken underappreciated, everyday blue-collar wears and turned them into lauded objects of style. Throughout the 90's reappropriation was rife within Hip Hop. The Kangol's and vibrant shell suits of the 80's were replaced by heavy denim workwear by Carhartt, sportswear by Ralph Lauren Polo Sport and Tommy Hilfiger, and the celebrated Timberland 6" boot. The requirements for Timb's in the streets appeared to go hand in hand with it's original intentions stated during it's first introduction in New England back in 1973. Sidney Swartz recognised the needs of workers who needed a hardwearing waterproof construction boot that was built to last. In the same vein 339 miles down the East Coast, drug dealers in New York were in need of something waterproof they could rock to roam the streets during the night, and the wheat suede, ankle high boot was the perfect companion. Being a music genre that found it's feet in the streets of New York (supposedly 1520 Sedgwick Avenue in the South Bronx to be precise) trends in fashion also found themselves evolving from the same grass roots origins. 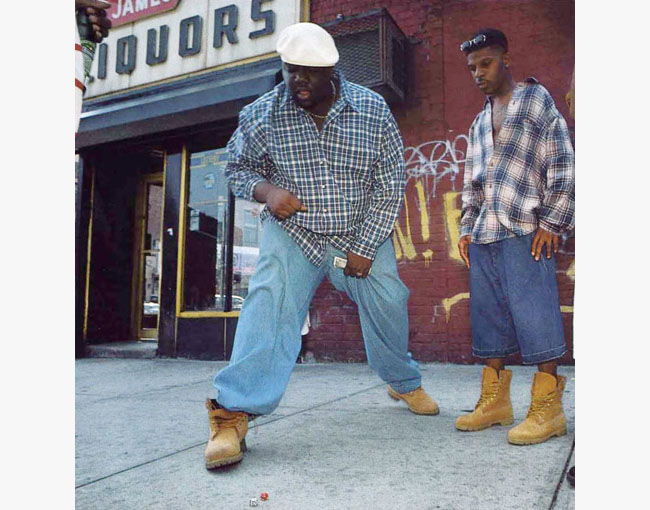 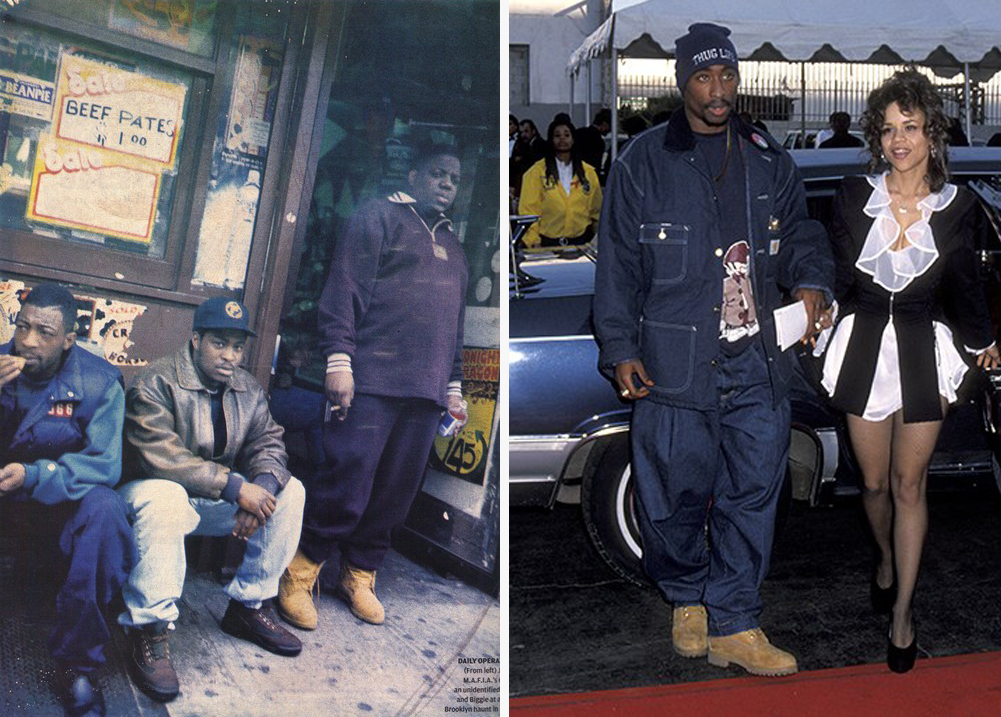 In the present day a more considered, form fitting style seems to be the norm in hip hop, but throughout the 90's bigger was always better. Oversized denim sat underneath vibrant Polo Snow Beach's, and completing the look sat a pair of 'Suede Timbs'. The boot found itself cosigned by some of the biggest acts of the era, with Mobb Deep, Das EFX and DMX all donning pairs for shows and album covers. Over time the boots even found themselves being included in lyrics on tracks by Kool Keith, Biggie and Jay Z to name but a few. As the 90's progressed certain areas of the genre began evolving their style, the 'militant' look took hold for a short period when Camo pants and heavyweight Carhartt Active jackets were favoured, working seamlessly with the 14-holed footwear staple. 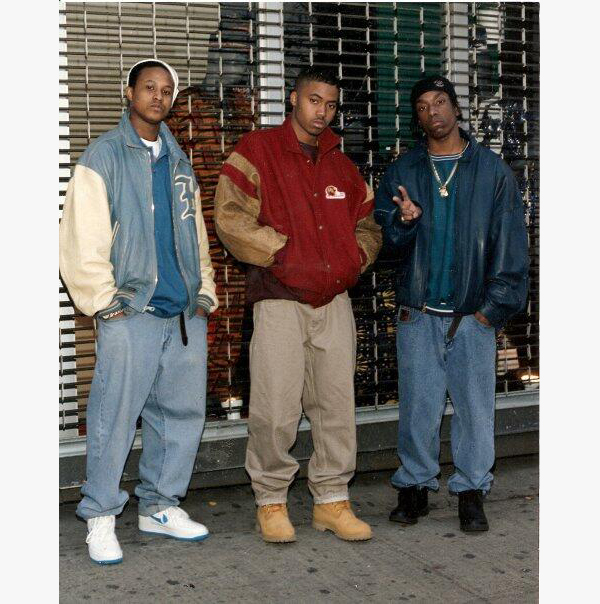 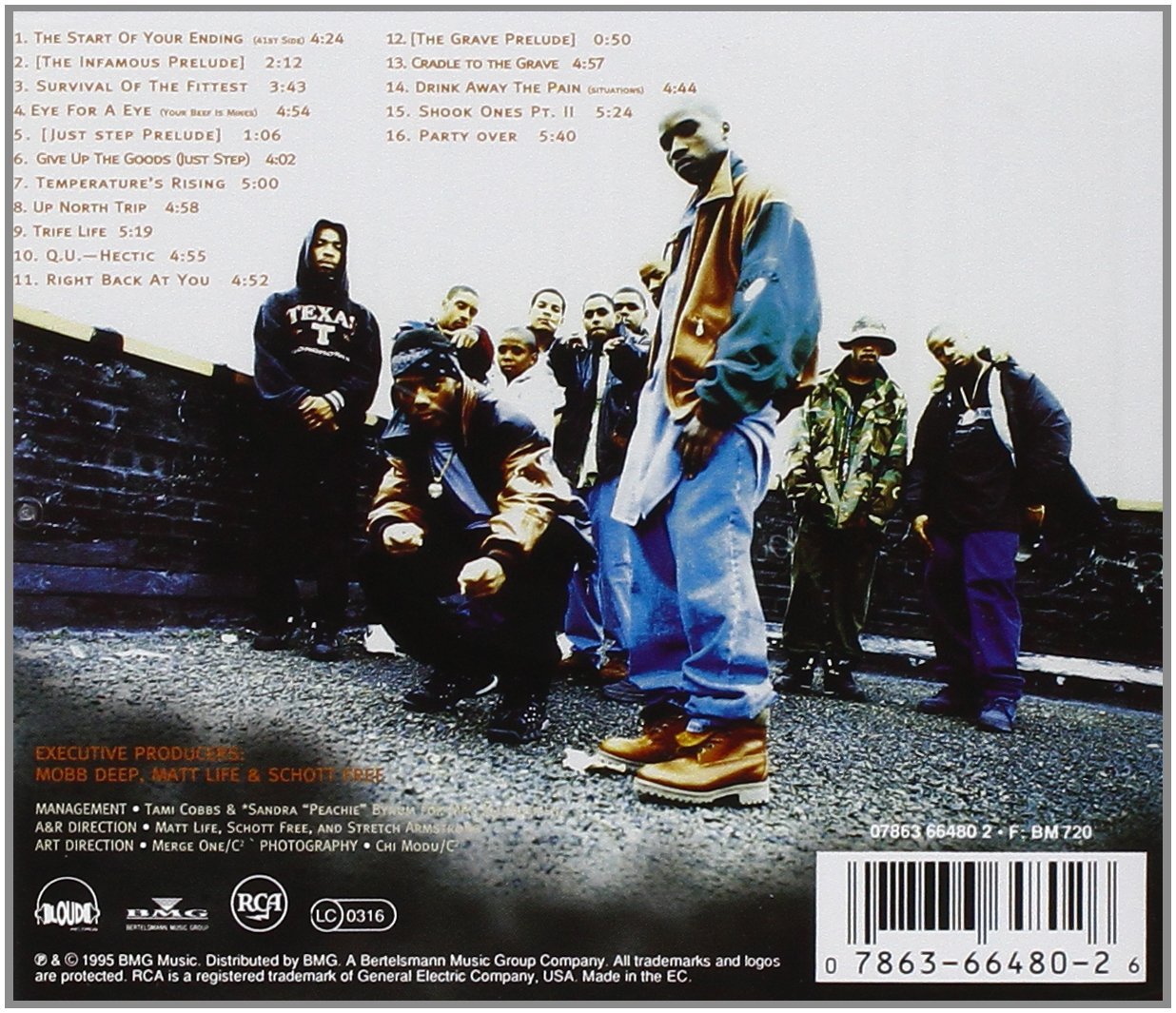 Moving into the Millenium, a new wave of artists began to take over, but the boots still held their own alongside the music. Jay Z's been a posterchild for the boot since his introduction to the scene in the late 90's, regularly spotted with pairs on feet in the press, on stage and courtside in Madison Square Gardens. Another seasoned connoisseur who stepped onto the spotlight around the same period was Cam'ron, who developed a fondness for the boot and even went to the extent of having pairs customised for music video's including a pair emblazoned with the iconic Burberry Nova Check for 'Oh Boy', and a vibrant pink bandana print pair to match a jacket in the 'Dipset Anthem' video, complete with bespoke handpainted Dipset Eagle logo on the toebox. 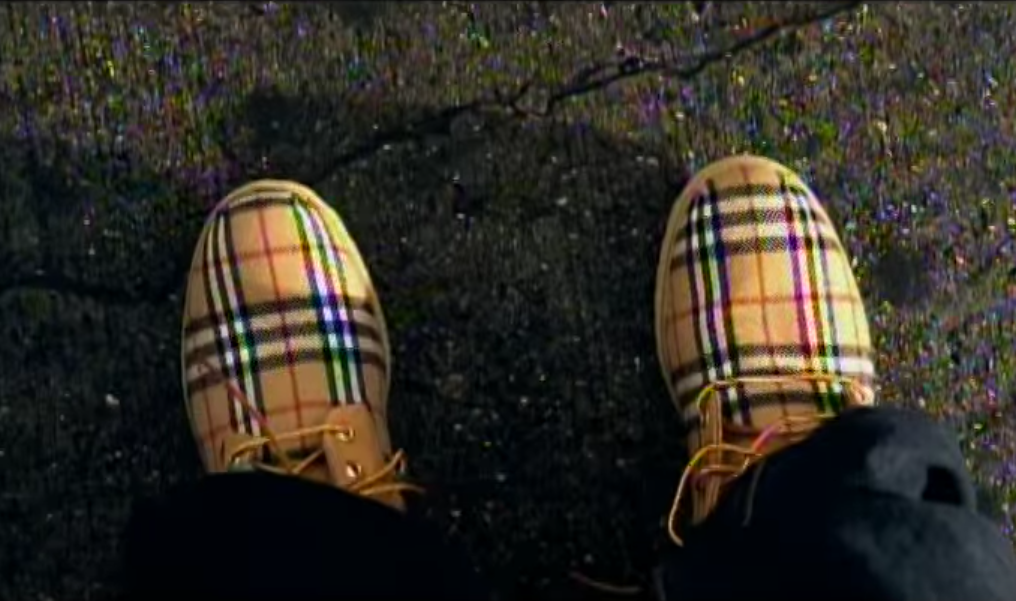 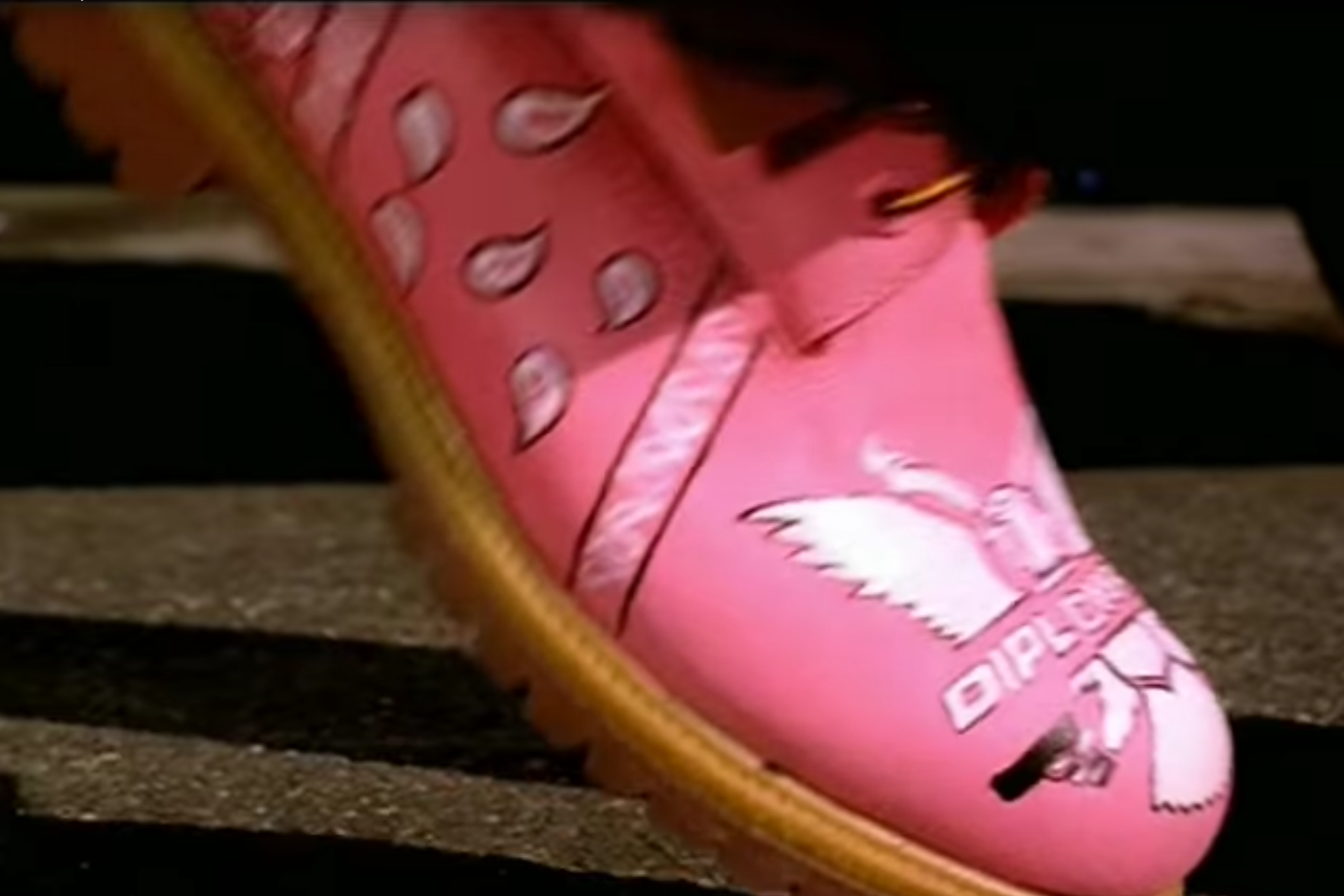