How exactly did The North Face become cool? Reblog Via Dazed 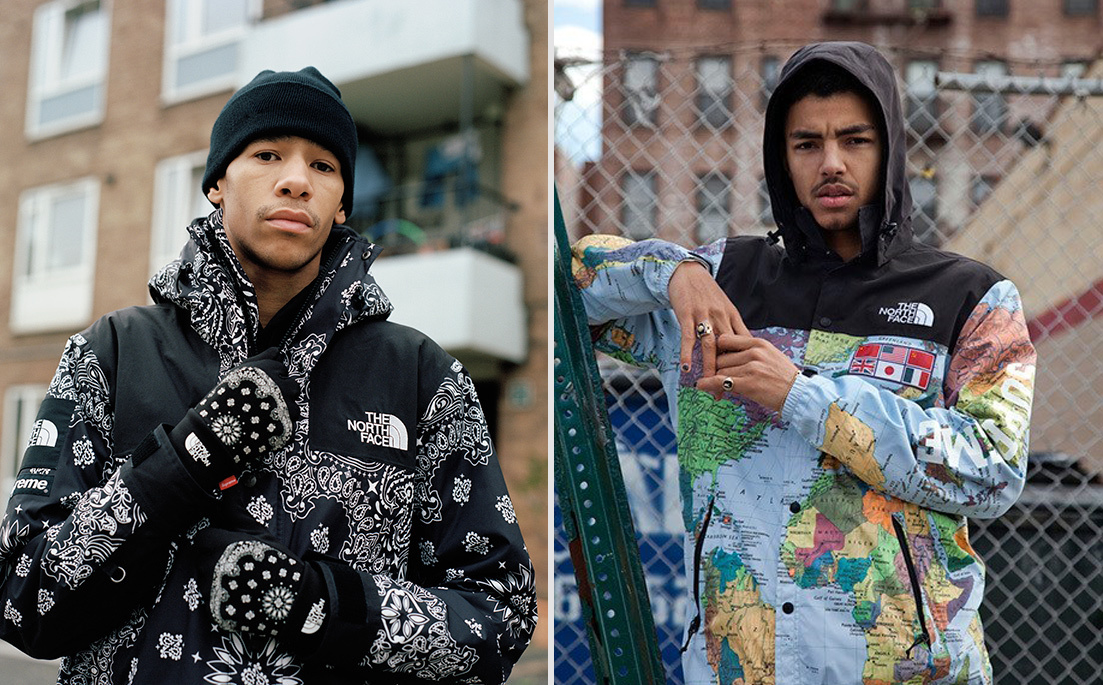 Menswear writer Calum Gordon recently put together an interesting breakdown for Dazed that looks at the way in which The North Face, a brand predominantly renowned for producing high quality outdoor garments, has been adopted and taken in by a completely different crowd than the brand originally targeted. To many, a mention of the brand The North Face conjures up ideas rooted in middle-England homogeneity, like warm pints, Land Rovers and thinly-veiled racism. It’s something your dad would throw on with wellies to walk the dog on a grey Sunday. Because that’s what dads like in their clothes – practicality, comfort, items that require no thought. The North Face’s seemingly ever-present half-dome logo is synonymous with an unassuming dress code, the kind favoured by off-duty politicians or quantity surveyors. And yet, today, the label commands collaborations with Supreme and Junya Watanabe. It fits perfectly into the wardrobe of the studied practitioners of normcore, and adorns the backs of health goths. It is revered by youth tribes, spanning the streets of London, the dilapidated shopping centres of Liverpool and the football stadia of Glasgow. Which is to say that it is a signifier of both the sartorially-minded and, in equal measure, those decidedly uncaring about any facet or subgenre of fashion. The great irony of North Face’s urban popularity is that is was conceived for altogether different purposes. Strangely, some people even use their GORE-TEX parkas and down-filled gilets for what founder Douglas Tompkins intended it for back in 1968, namely traipsing up mountains, scaling glaciers and hiking over terrain that certainly wasn’t tarmacked. But the utilitarian nature of the brand’s product, designed to protect against the elements wherever you are, has since been appropriated by those with no intention of tackling anything even remotely close to a steep incline. The question that inevitably arises is, just how did a brand from San Francisco that specialises in performance gear for hikers and outdoor enthusiasts transcend so many boundaries and classes? How did it come to encompass so many disparate subcultures? Just how exactly did it become cool?

Back in 1986, the notion of fashion collaborations was still a novel concept and the word Apple was synonymous with fruit baskets rather than iPhone and MacBooks. That year, the California-based tech brand launched a short-lived clothing line, with dad caps embroidered with their iconic multi-coloured motif, Apple-emblazoned tracksuits and Nautica-esque outerwear, all looking like a streetwear collection that could have dropped last week. The collection also included a collaboration with Tompkins’ brainchild on a poly-cotton vest available in both teal and yellow. Just last year, one of Apple’s old varsity jackets sold for $825 dollars on eBay, only for Drake to be seen wearing it some weeks later, prompting an internet scramble to hunt down vintage employee goods from the 80s (and sellers to crank prices up into the thousands). So it is perhaps only with hindsight that we can truly appreciate just how good this collaboration was – Apple at the time were still floundering in the tech-world – if the same products were released today, it would be met with palpable levels of hype. 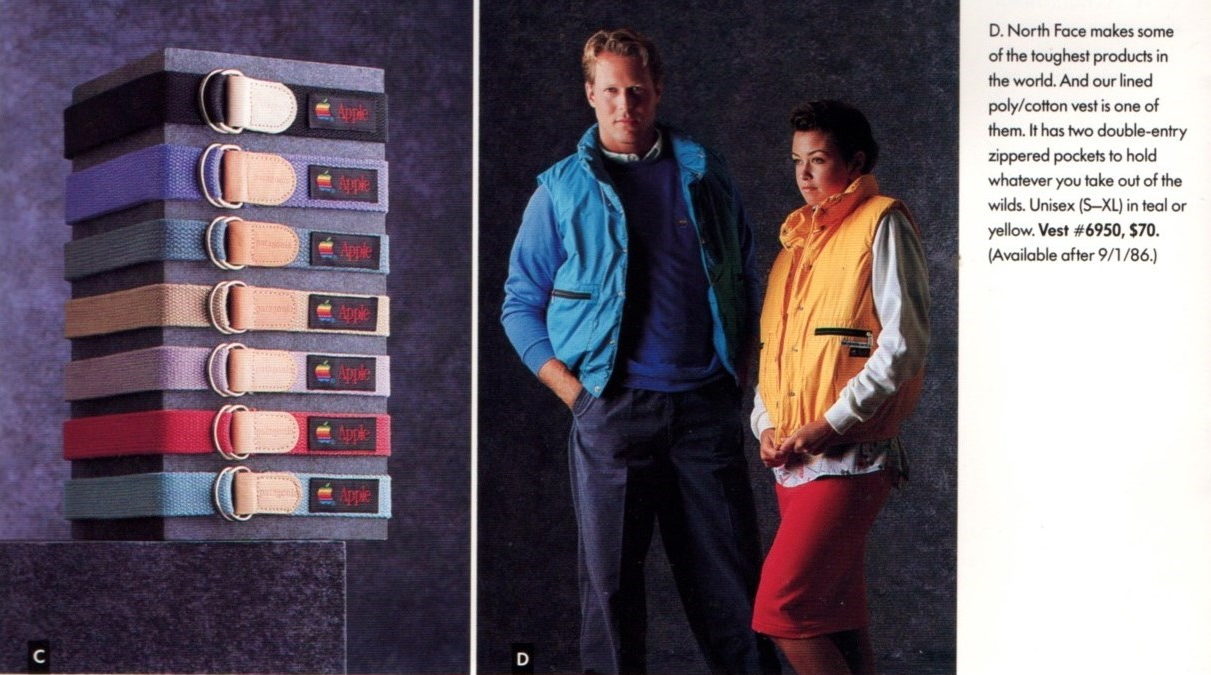 Since the late 1980s, the brand has taken on a level of subcultural significance for almost humorously practical reasons – they make clothes that are perfectly suited for street-dwelling youth tribes. The 1993 video for Wu-Tang’s Method Man saw the North Face’s Tech Steep jacket make an appearance – the same style that Supreme reissued earlier this year as part of their on-going collaborative relationship. And throughout the 90s, the label’s outerwear would be seen on rappers in photo shoots and music videos, reflecting the trends seen on the streets of New York and America’s East Coast, where late-night illicit outdoor activities saw the appropriation of number of utilitarian workwear and performance brands, such as Carhartt, Helly Hansen and Timberland. Today, it’s been adopted by London’s grime artists and fans – go to any show and you can expect to see their famous logo both on stage and off. 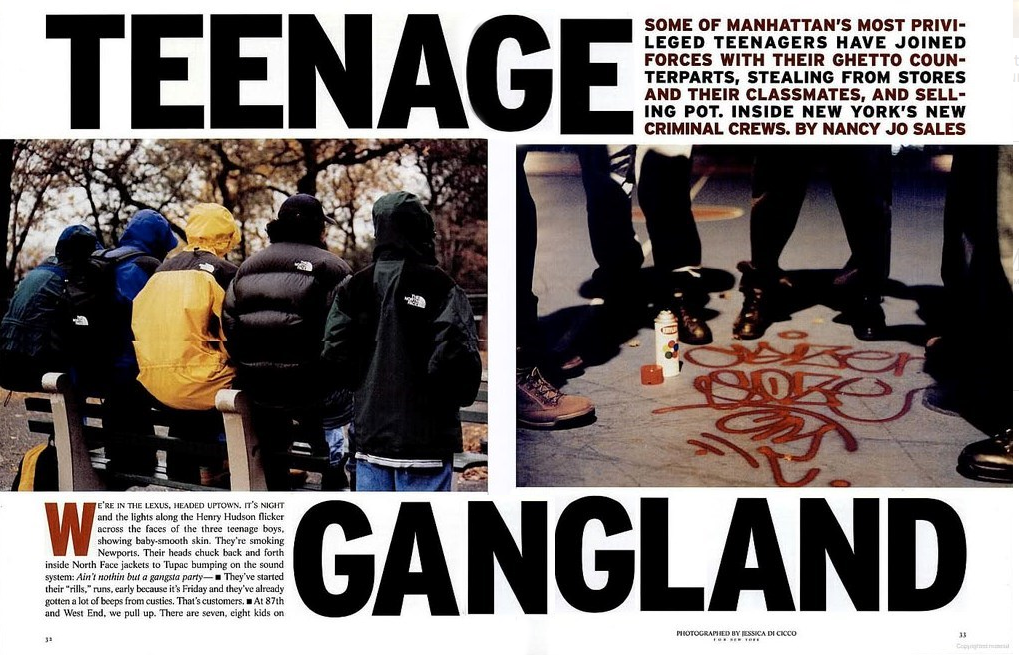 That same desire for practicality has been echoed by facets of youths this side of the pond, but with a certain genre-eschewing charm. North Face’s down-filled outerwear has become a staple within London, along with a host of brands that specialise in tech-based sportswear from Stone Island to Nike, but it is perhaps less recognised for its popularity outside the capital. There are groups of Liverpudlians whose penchant for technical skiwear is equally borne out of the harsh practicalities of hanging around outside in inclement weather, but also somewhat of a desire for a uniform. Monochromatic and, when worn en-masse, undeniably striking, menacing even. Since the turn of the decade a derivative subculture of what most would probably called scallies – or occasionally ‘Johnheads,’ drawing from the name of the St John’s Shopping Centre they’re known to frequent – have emerged as perhaps unlikely aficionados of niche ski-wear brands. Naturally, North Face jackets are never far from the scene. “I grew up in Merseyside, where lads wore a lot of North Face en masse, like a uniform,” remembers Dazed Digital editor Thomas Gorton. “If I was on the bus with my mates and a crew of guys dressed in black North Face got on, nine times out of ten we’re in trouble. Nine times out of ten the lads wearing North Face are gonna win, too.” Travel further north and you’ll find and you’ll find facets of Celtic fans – who style themselves on the vociferous ‘Ultra’ fan-groups of European football – also clad in black, The North Face’s embroidered logo adorning their right shoulder blade. Again, their outerwear choices are as much about a sense of belonging as they are a style statement. 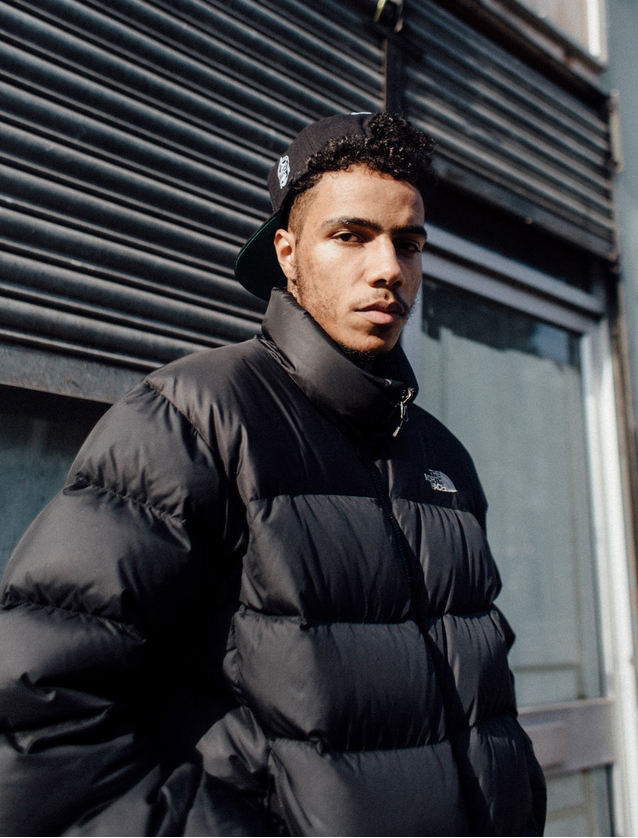 The North Face is even the subject of one particularly leftfield fetish website, aptly named DownGirlz, combining puffa-jackets and bondage – but arguably it is the brand’s on-going collaborations with cult New York label Supreme that inspires a greater level of fetish-like worship. Since 2007, each season sees Supreme releasing outerwear and accessories in conjunction with the San Franciscan specialists (sleeping bags and slippers have both appeared in recent years). Each one is the antithesis of conservative, incorporating leopard-print, multi-coloured maps and gang-inspired bandana prints, borrowing from their technical know-how and applying Supreme’s signature design style. One backpack even inspired a novel. Similarly, Junya Watanabe has partnered each year with North Face, dating back to 2006. As part of the Japanese designer’s eYe program – an umbrella group for his collaborative exploits with the likes of Levi’s and New Balance – Watanabe has merged his own classic styles, like camo-infused workwear and down-filled hunter gilets, with North Face’s technical manufacturing prowess. A co-sign from either brand is typically enough to see a spike in their cultural cache, but consolidating this relationship into a seasonal staple has arguably allowed the brand to make the jump from ubiquitous dad-wear to acceptable fashion week attire. 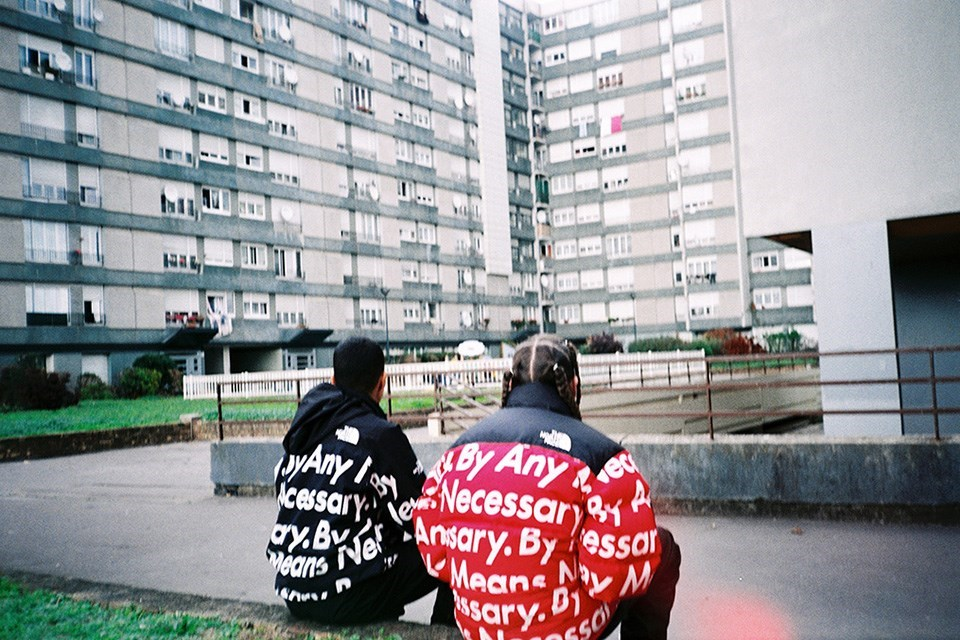 The label also carries a certain weight amongst #menswear fanatics – the ones that all grew beards and threw out all their trainers in favour of brogues five years ago – owing to the North Face’s Japan-only Purple Label. Designed by Eiichiro Homa of cult-Japanese outerwear label Nanamica, each collection marries sportswear with the hackneyed (but highly accurate, in this case) stereotype that Japanese have an incredible eye for detailed design. This sub-brand’s limited, Japan-only nature is perhaps something you would more readily expect from North Face’s aforementioned collaborators, playing into a decidedly male characteristic of fashion one-upmanship. The appetite for Purple Label in the West which has seen menswear enthusiasts enlisting the help of proxies to purchase goods, has helped precipitate the launch of an equally fashion-led ‘Black Label’ equivalent in Europe. 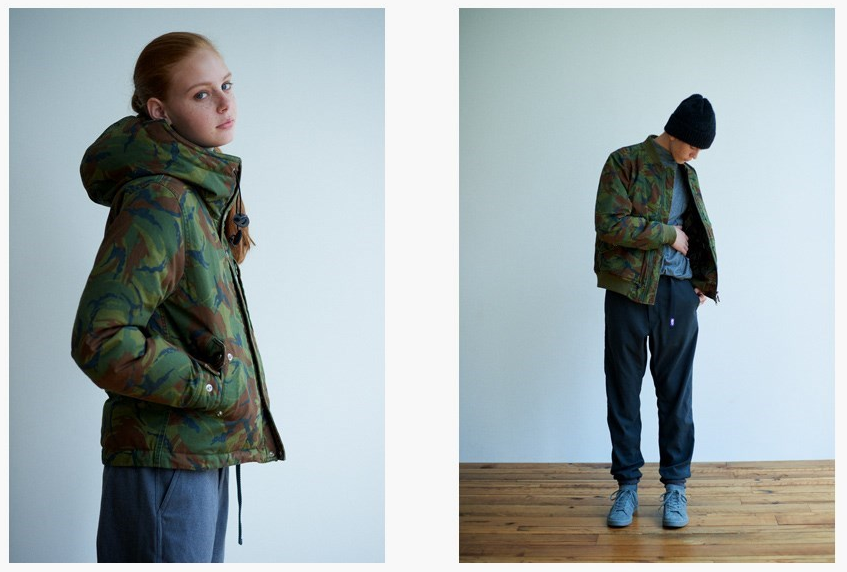 North Face are masters of ubiquity. The brand is seemingly everywhere, and yet still capable of eliciting desire from all ages, consumers of different social strata and even different continents. What North Face might mean to someone from Kent, sat in a pub with his newspaper, his fire and his pint would mean something entirely different to someone who grew up in New York being introduced to the brand when Notorious B.I.G. rapped: “Hail Mary full of grace, smack the bitch in the face; take her Gucci bag and the North Face.” Their mainline products are seemingly so unassuming, so banal, so practical that each owner or subculture have been able to project their own identity onto those three simple curved lines and sans-serif text. It has become a chameleon-like form of outerwear democracy, cultivating a host of reference points throughout its history that are as equally diverse as its wearers, without feeling contrived at any point. And yet, their ad campaigns continue to focus on the kind of outdoor enthusiasts for which Tompkins initially intended the brand to cater to, whilst largely continuing to make products for this same demographic. They seem thoroughly aloof to the subcultural connotations that surround them, and with no interest in being hype or popular. Which, of course, has always been the best way to appear cool. Shop our current selection of The North Face product online and in selected size? stores now.
Save Save Save