The Story Behind the Nike Sock Dart 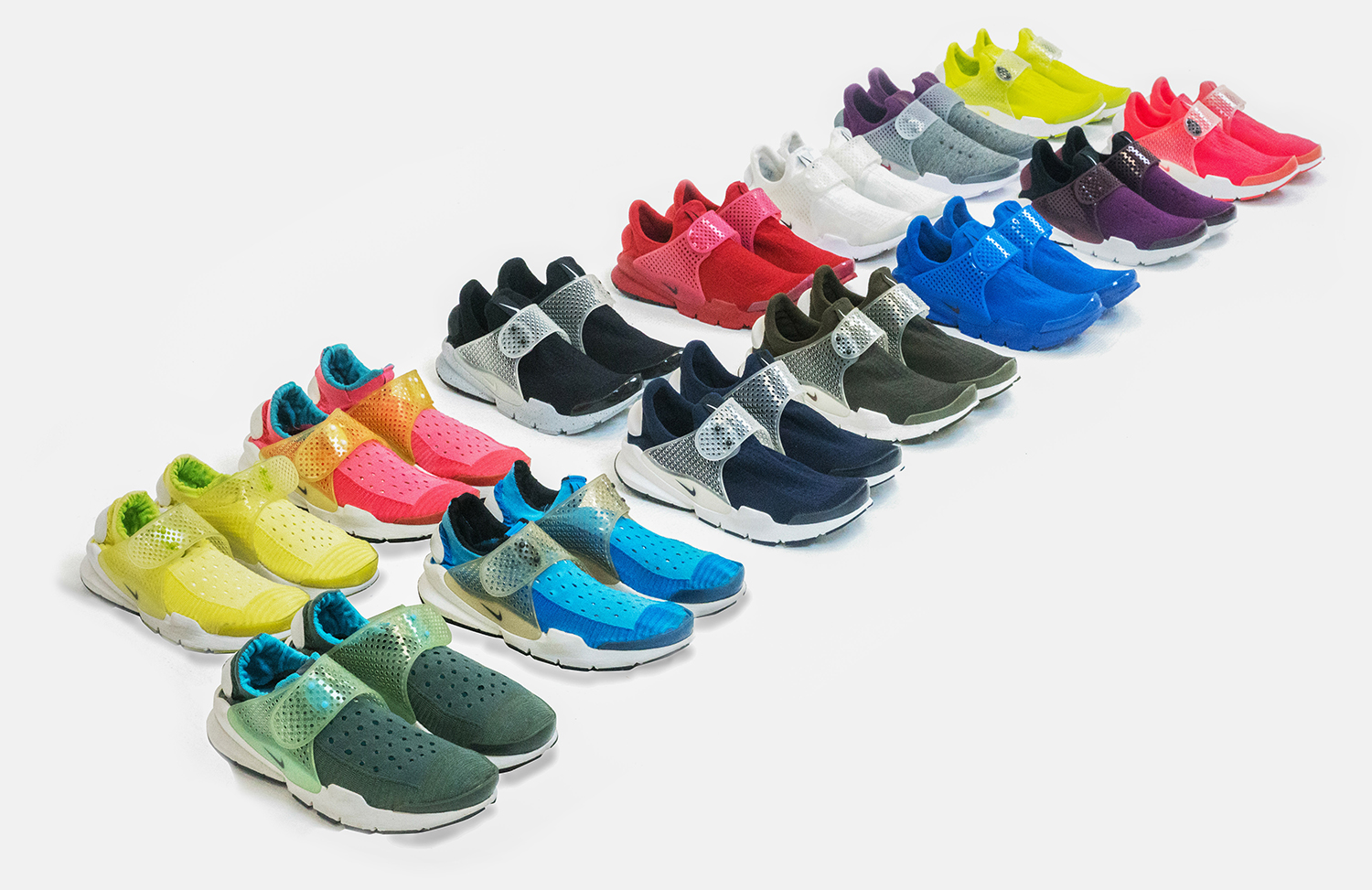 This pure showcase of 'more through less' arrived with a whisper. Despite that hushed launch 12 years ago, the Sock Dart is still making noise. Every chapter in the Nike design narrative passes the baton for the next wave of innovation. The world has only just caught up with the look and feel of the Sock Dart, but it’s a shoe with a significant history. Sock-like comfort has been a mission since the 1970s, and it’s an element that created a seamless story that brings us to the present day. There have been several signs marking the route to this silhouette. Nike co-founder and habitual innovator Bill Bowerman removed the stitches that gave the company’s original athletic muse, Steve Prefontaine, blisters for the one-piece forefoot of the Pre Montreal Spike in 1973. A stretch mesh forefoot on 1979’s Bermuda runner played with new form. The ground breaking Sock Racer from 1985 — a strapped-down sock on a sole that was far ahead of its time — was deliberately different, down to its black and yellow bee-like colourway. 1988’s Air Flow was a neoprene running tight for the foot. An ankle embracing Air Huarache design became an unexpected bestseller in 1991, while 2000’s Air Presto had fearless looks that made it a cult classic. Each shoe helped instigate the next movement. 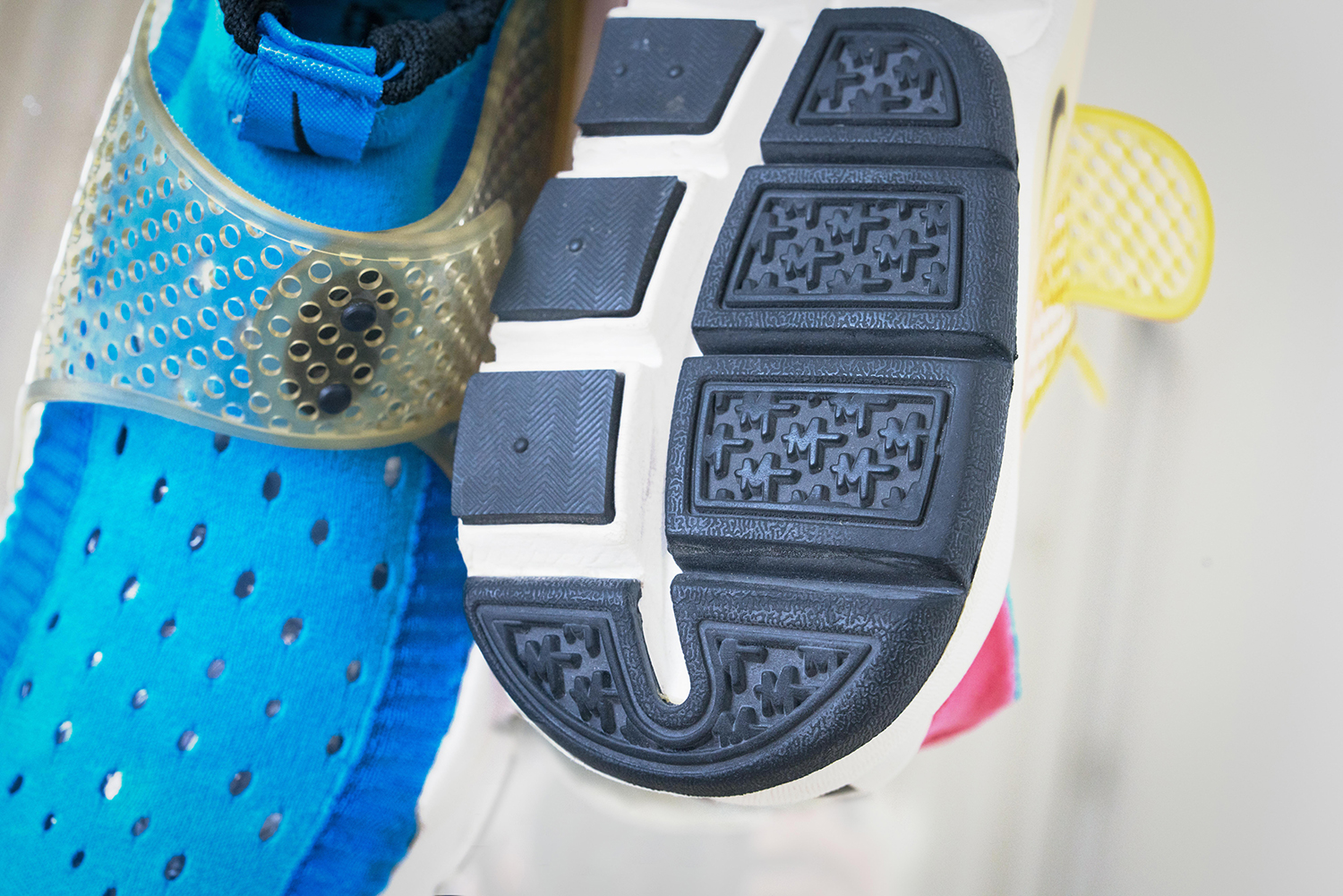 'More through minimalism' has been a creative mantra. Reductionism reveals the essence of a design and that simplicity can make even the most unorthodox ideas into timeless favourites. Around the time that the Air Presto was created, a sense of freethinking, pre-millennial spirit was at work. The Sock Dart would emerge through veteran Nike designer Tinker Hatfield and his team’s prototyping and invention, Working with the notion of ultimate comfort, a three-dimensional support system via a circular knit method of construction was discussed and a Sock Racer prototype emerged that used an actual sock. Tinker and his fellow visionaries had been reiterating that this was footwear’s future, but some still needed convincing. The sample was just an experiment — an idea manifested that might prove important later down the line, but for the time being it was just a notion. 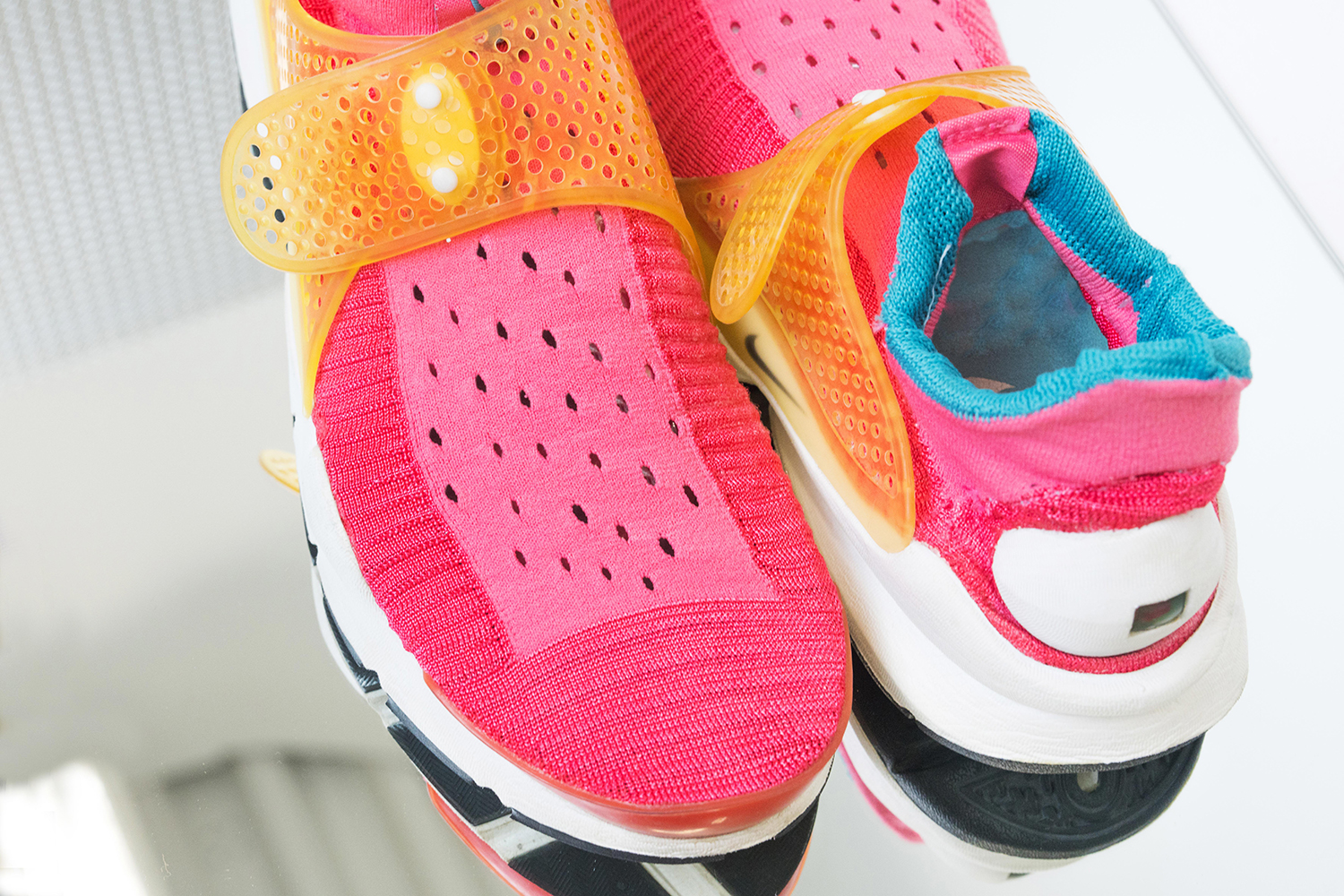 When Tokyo-based tastemaker Hiroshi Fujiwara was enthusiastically discussing the Presto with Tinker in 2000, he was shown the Sock Racer sample. Given Hiroshi’s appetite for offbeat forms built on absolute function, it piqued his interest and he encouraged Tinker to pursue the project further. At the time, the idea of implementing the precision of a computerised knitting process to create a pattern that could target the shape and needs of the foot’s form were a technologically tailored step into the unknown. The Sock Dart took form. With laces proving unnecessary, a custom lockdown was possible through a perforated silicone rubber forefoot strap. Like the Presto, a toecap reinforced the toes and gave the silhouette extra protection and form, while a unique sole unit cradled the foot laterally and medially. Matching the spirit of its upper, an equally precision positioned pattern on the outsole was unique, flexing in multiple directions for natural motion. In 2002, Hiroshi, Tinker and future Nike, Inc. CEO Mark Parker — himself a former designer and developer with a similar passion for uncompromising creativity — formed the HTM project, a platform for small runs of progressive, premium, limitless footwear that operated like concept cars. 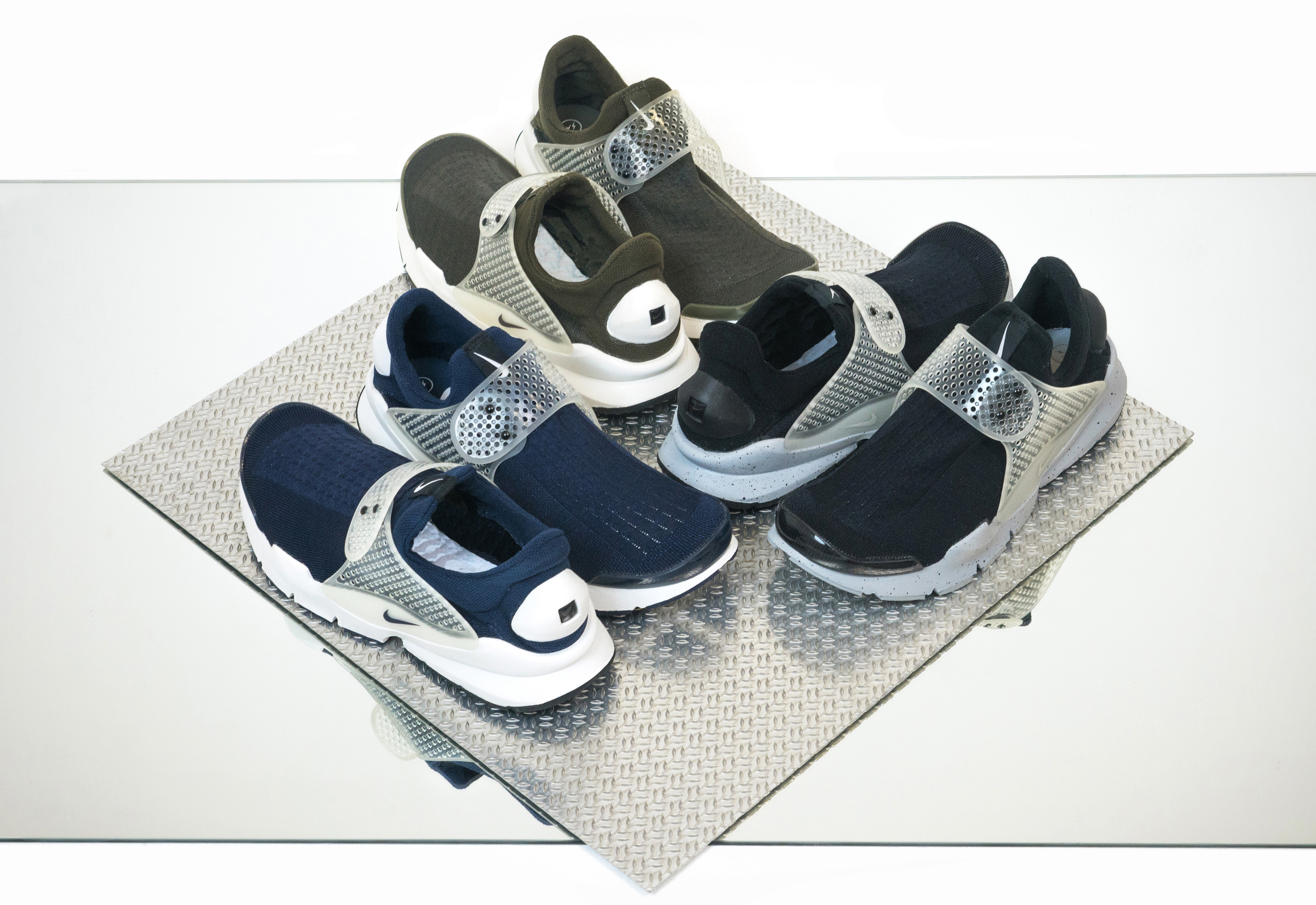 While early releases were limited edition amendments to old and new favourites, the mutual appreciation for the Sock Dart meant that it would become one of the most advanced entries in the HTM collection. Six colourways were released in July 2004 without warning, appearing in tiny size runs at a handful of boutique stores globally. In some territories, they were in instant hit, while others needed a little more time to take in the unique aesthetic. Oddly, none of the shoes were given any official HTM branding, and beyond coverage in some Japanese publications of the time, there was no marketing, no advertisements and very few blog entries. Then it was gone. Throughout the last decade, elements of the Sock Dart’s influence were manifested elsewhere. Special versions of the Zoom Moire — one of the original Nike+ releases — were evocative of the Sock Dart’s sole, and when Flyknit premiered in early 2012, that game changing construction emerged via some conversations sparked by the Sock Dart’s knitted upper. A decade after that 2004 drop, the Sock Dart returned in late 2014 as a limited edition NikeLab partnership with Hiroshi’s Fragment Design. That reintroduction has helped define what lightweight everyday performance could be in the modern age. It took 10 years for mindsets and wardrobes to nearly catch up with a Dart, but its impact was significant. 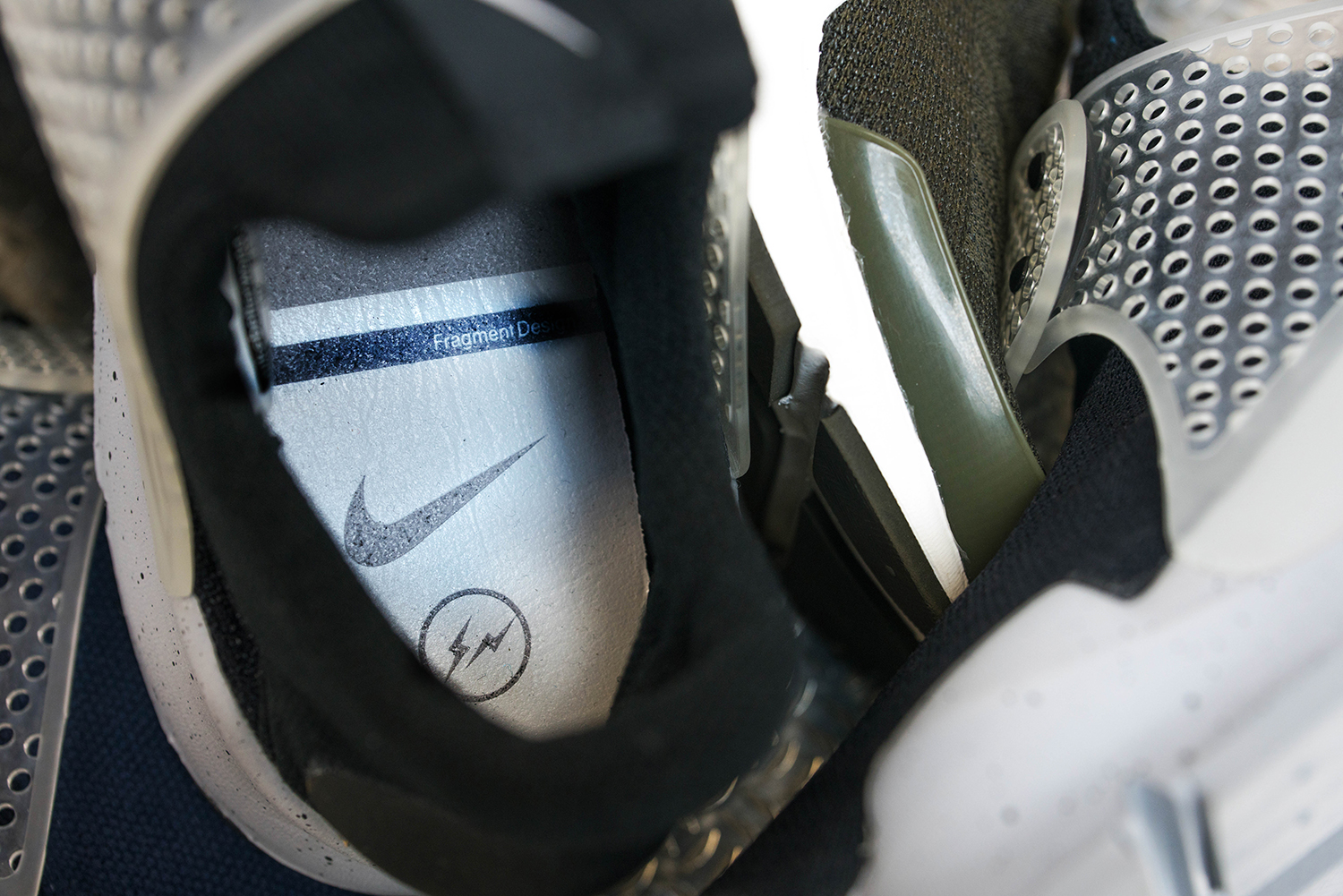 Since that resurrection, the Sock Dart has been released in an an array of makeups, from 4th of July variations in white, red and blue, to a ‘Be True’ celebration in rainbow colours, to a Tech Fleece remake and more recent design democracy via the NIKEiD system. Engineered solutions, a single shoe, and the industry altered forever. Simplicity emerges through complex processes.
Save Save Save