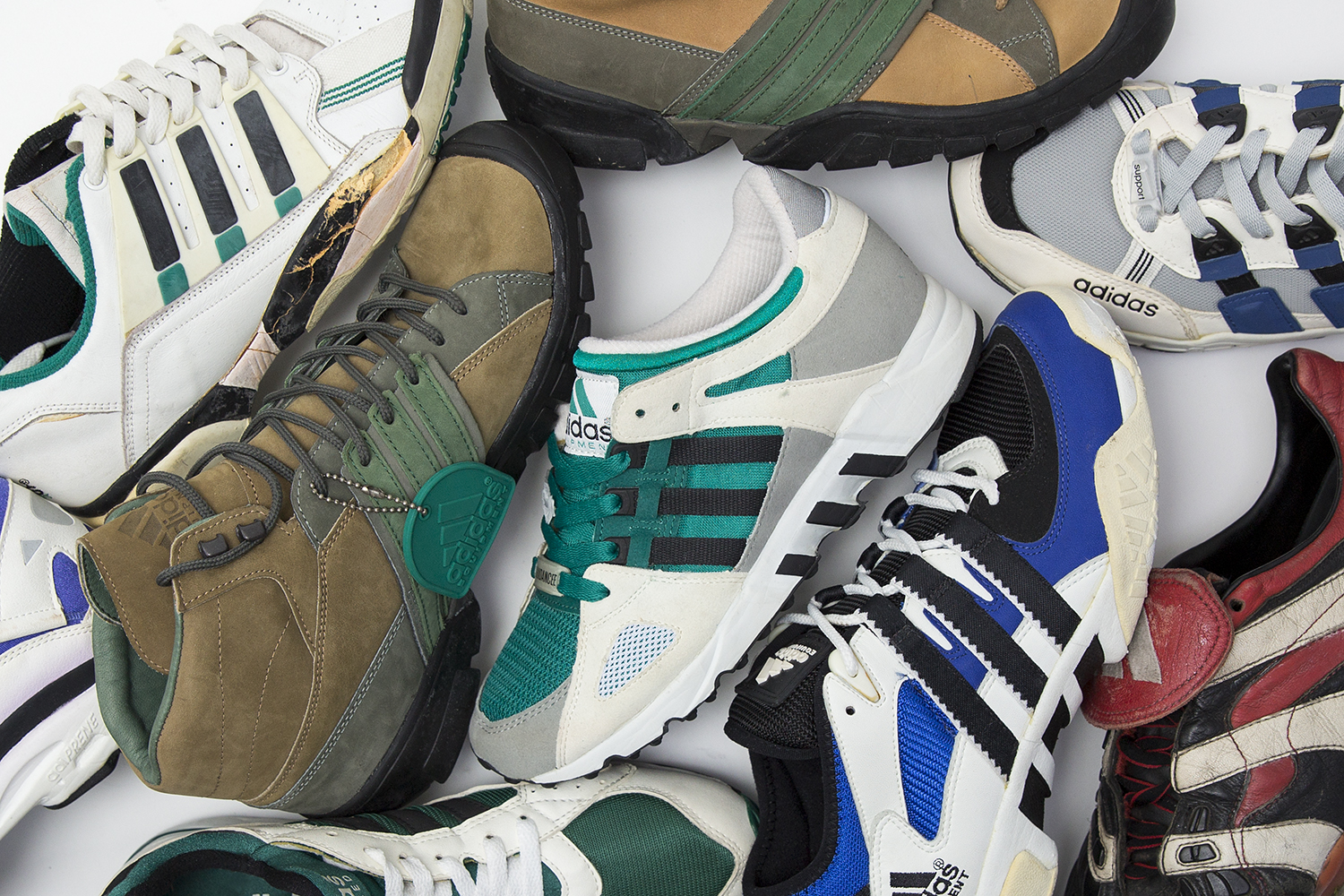 adidas as a brand itself, is built on the premise of innovation. Since it’s creation by Adolf Dassler back in 1949, it’s strived to constantly push the boundaries in improvement of athletic performance. Dassler experimented with the development of running spikes, constantly trying to make them lighter and more efficient to ensure podium positions. This meticulous attention to detail has continued through the brands storied history right up the present day with their latest statement offerings, Primeknit & Boost. 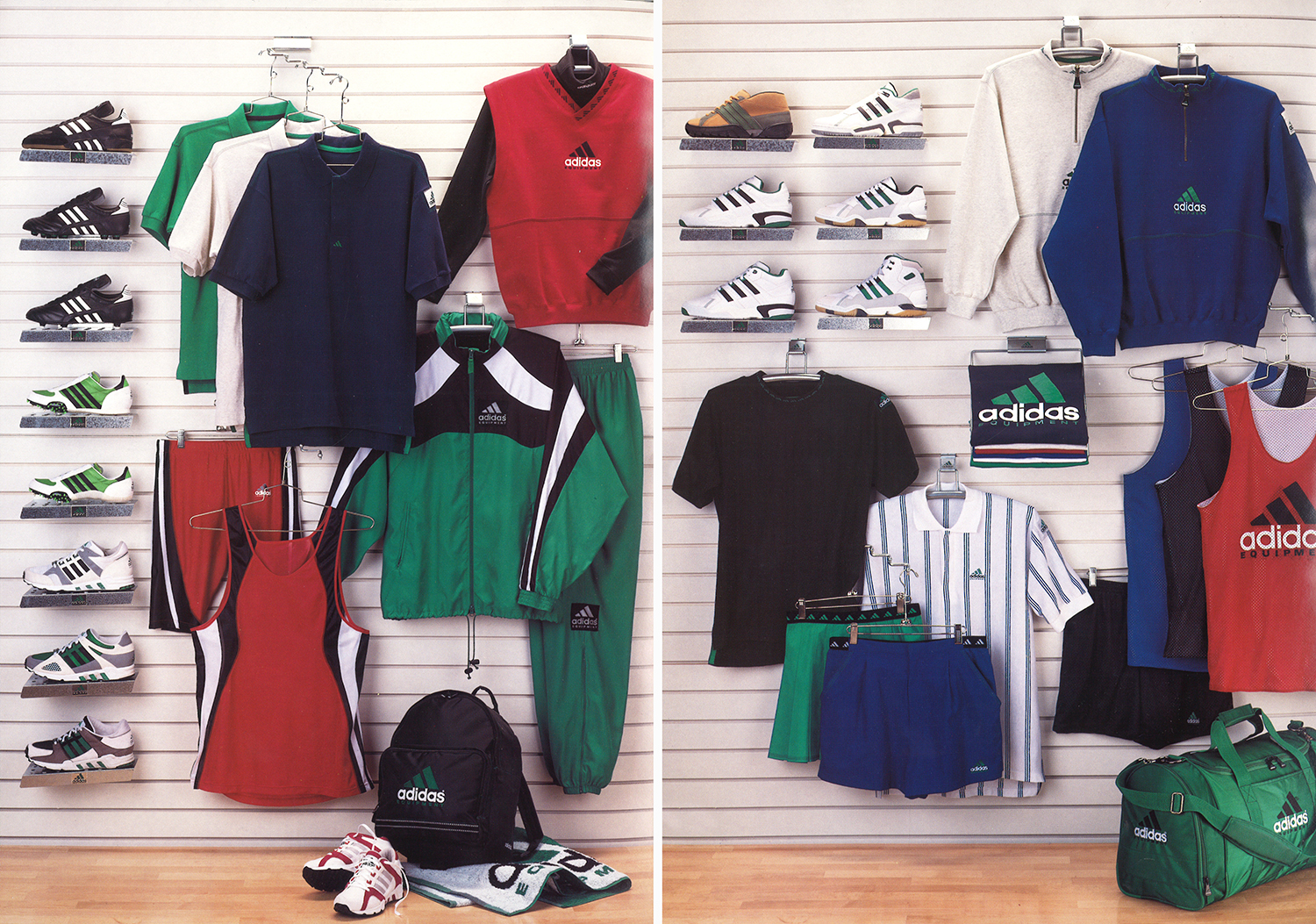 In 1991 a new sub-label of adidas was born, designed to cater specifically to the athlete, and ensure their needs were met with the correct apparatus. Enter, the birth of the adidas Equipment line. Peter Moore's aim with the range was not to merely create the most expensive or most technical, but purely the best performing to serve the users requirements. 'Equipment' was a word that sounded like it meant business, you didn't just 'play' with Equipment, you 'used' it. These were tools of sorts so this needed to be represented through its brand identity. 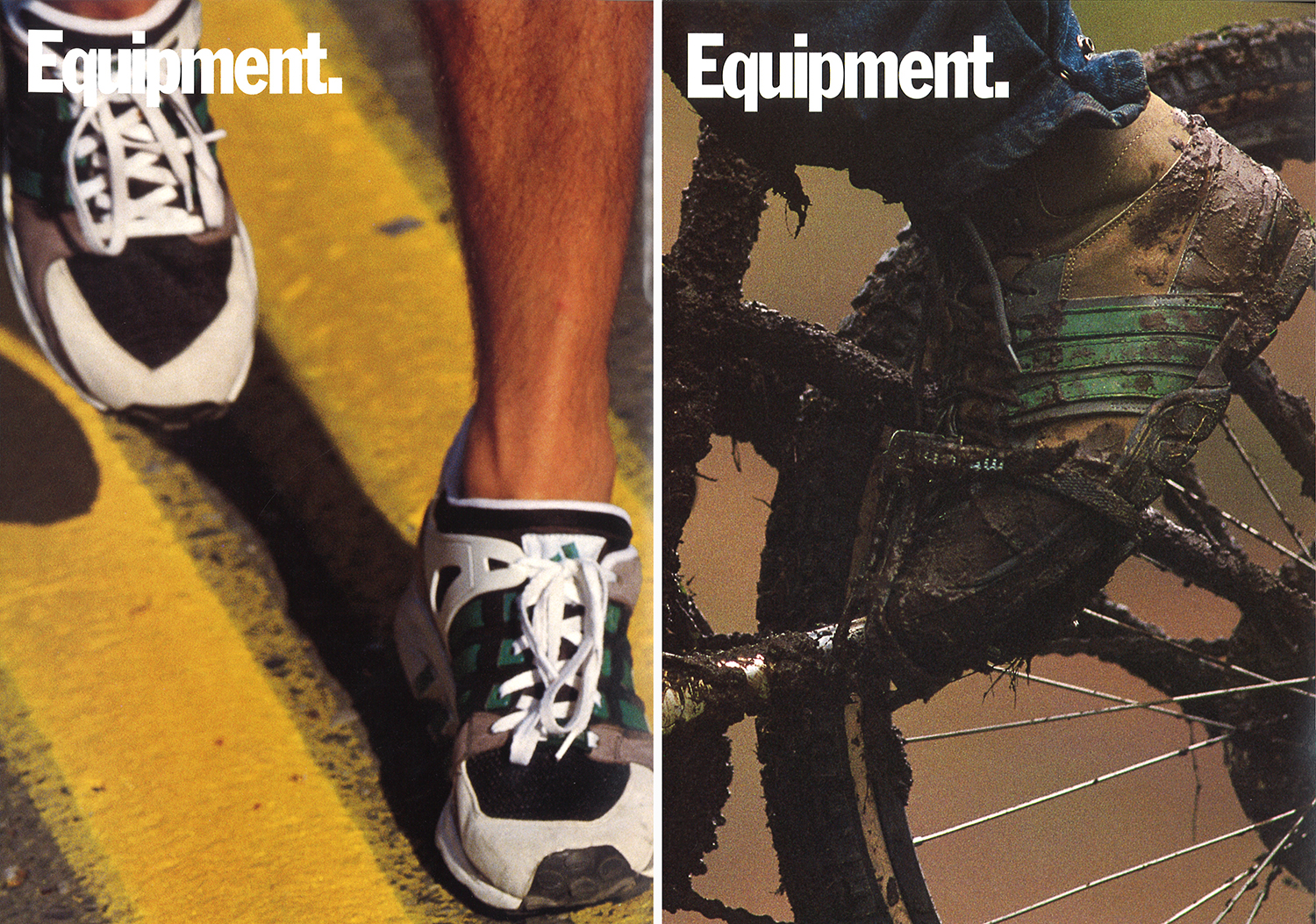 The change in logo was also a big move for adidas at the time, with Peter Moore stating that he thought the trefoil looked a bit 'stuck on' to footwear, and these performance shoes needed something that looked strong and powerful. The three strikes were a bold statement that would sit proudly on all of it’s ‘top of the line’ products as a watermark of quality. The original colours of Black/White & subtle hits of Green were used to draw focus towards the performance element of the shoes rather than just living off a colourway and disregarding the actual important aspects of why the shoes were being worn in the first place. 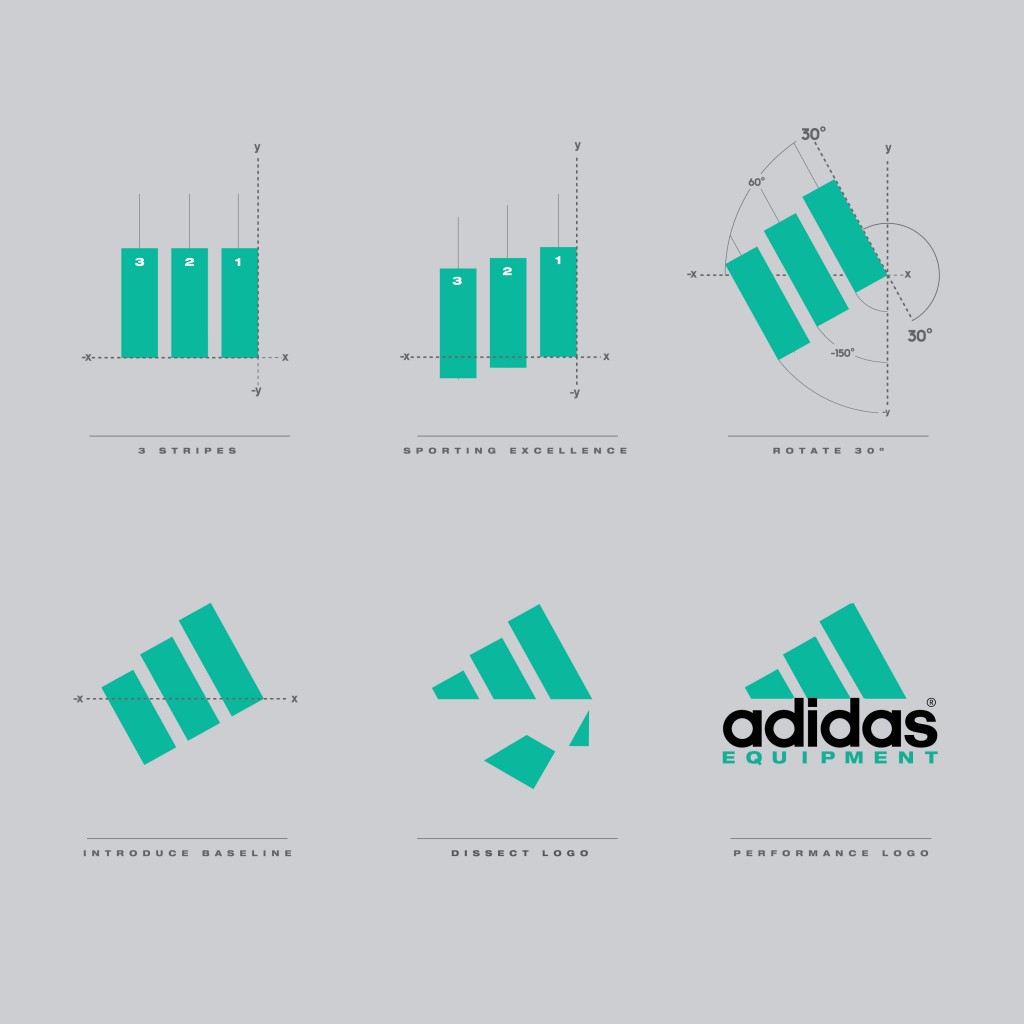 Equipment spanned it’s reach across several different categories throughout this first decade, with products created for the gym, athletics, football, and furthermore the exploration of the great outdoors. Some of the other interesting sub-lines that Equipment spawned included 'Feet You Wear' which aimed to mimic the stability and efficiency of running barefoot, and the legendary Predator line of football boots in it's signature black, white, and blood red colour scheme. A familiar factor you'll notice as we take you through our collection, is how 'Riemen', or straps are used on each style in order to provide adequate lock-down across the midfoot, both serving functionally and as a styling element for the side stripe branding with great impact. 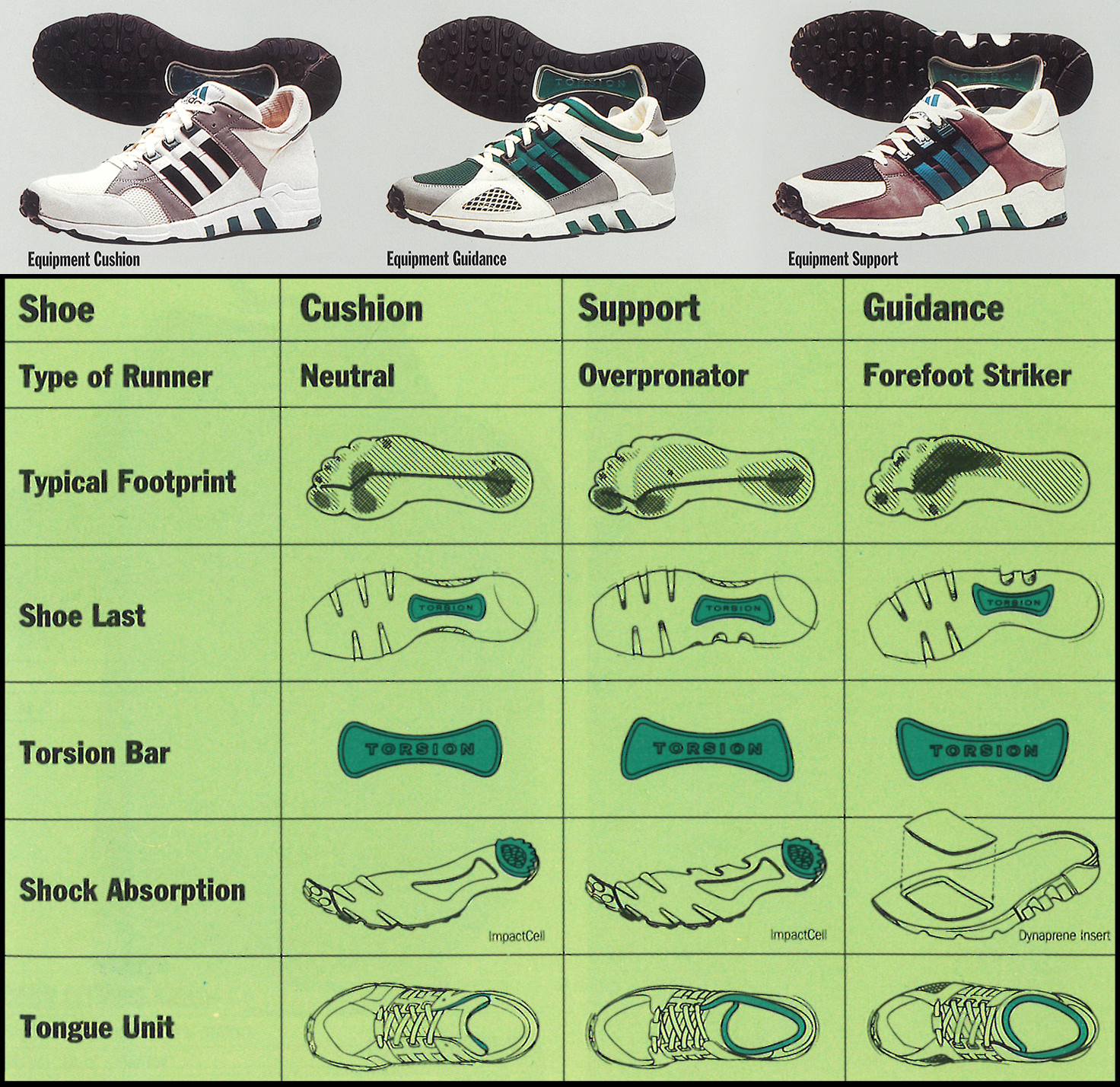 We’ve delved into our Lock-Up once again and pulled out a few styles that we feel show a small glimpse into the expansive range offered by Equipment, and showcase the different categories it's catered to in the past. 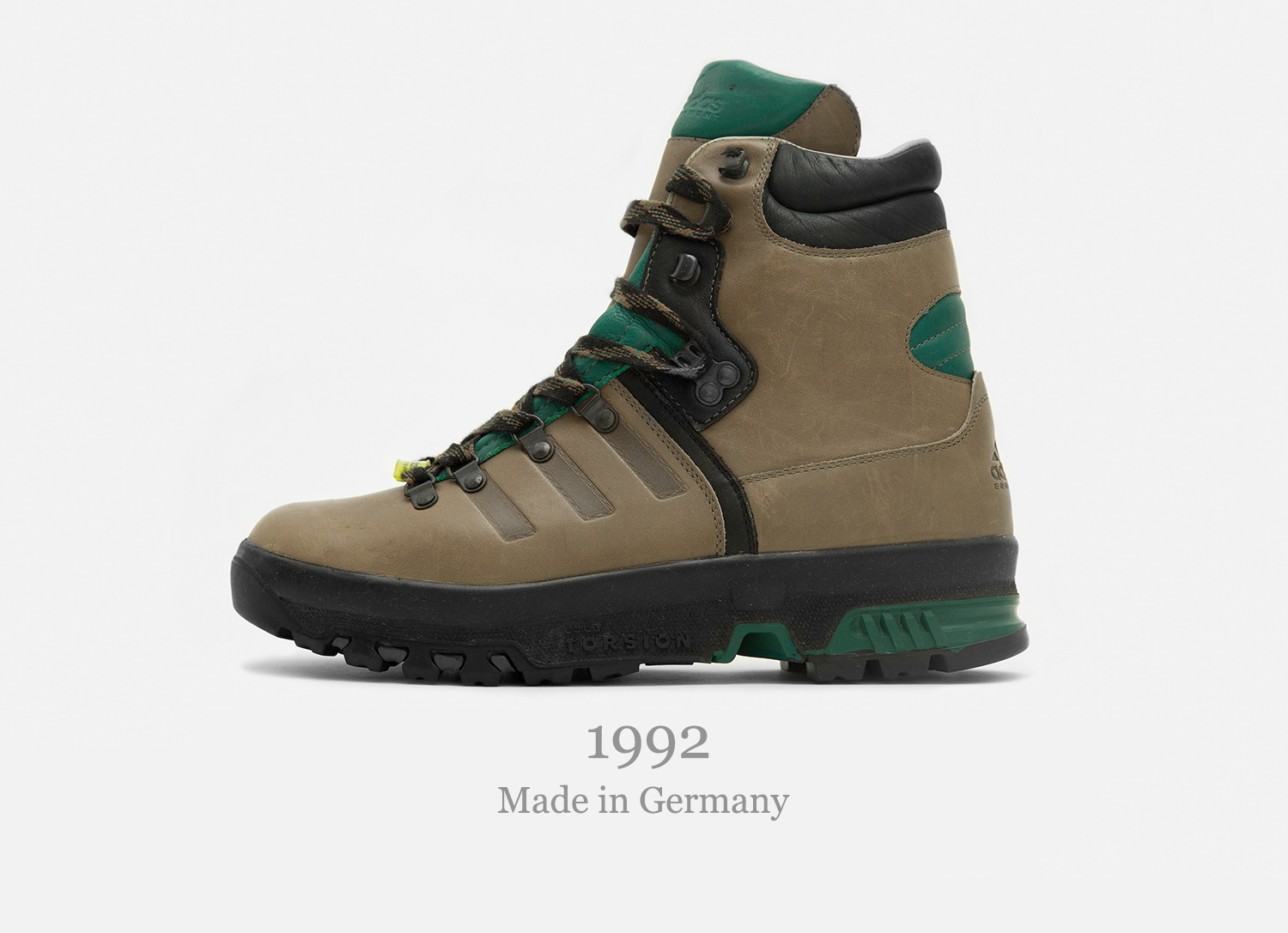 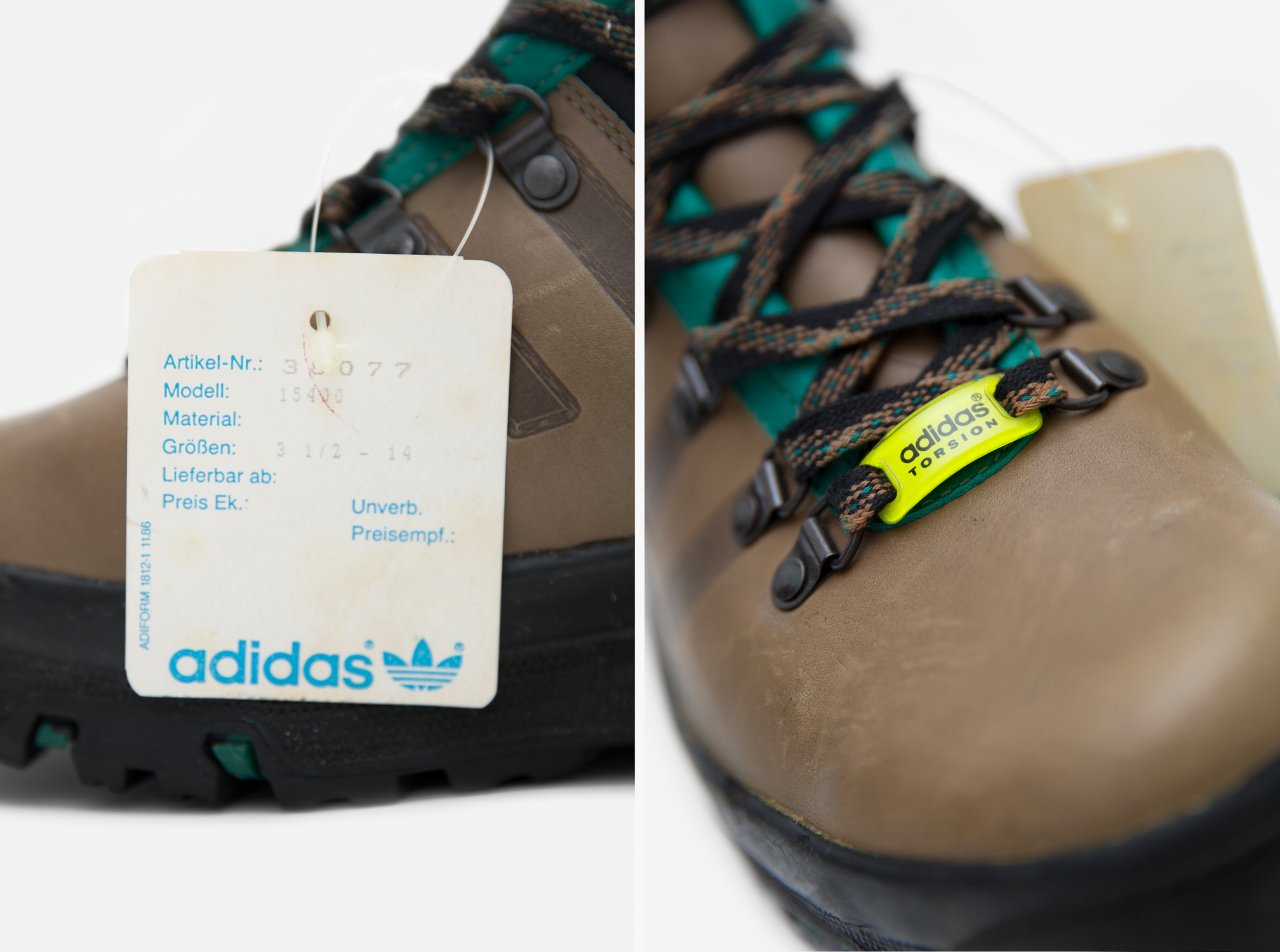 adidas Equipment Trekker - Made in Germany (1992) Activities outdoors will always require gear that's built to withstand a beating against the harsh weather elements mother nature will inevitably throw at you. The Equipment Trekker was an extremely hardwearing hiking boot created as a bit of a pre-cursor line to the EQT 'Adventure' collection that would arrive a year later. The external of the upper was carved out of an incredibly tough leather to avoid damage from rocks and outdoor terrain, while the inside was lined with a slightly softer but still just as resilient Nappa leather. D-Rings acted as Riemen to enhance the fit around the midfoot and pull the upper together.. 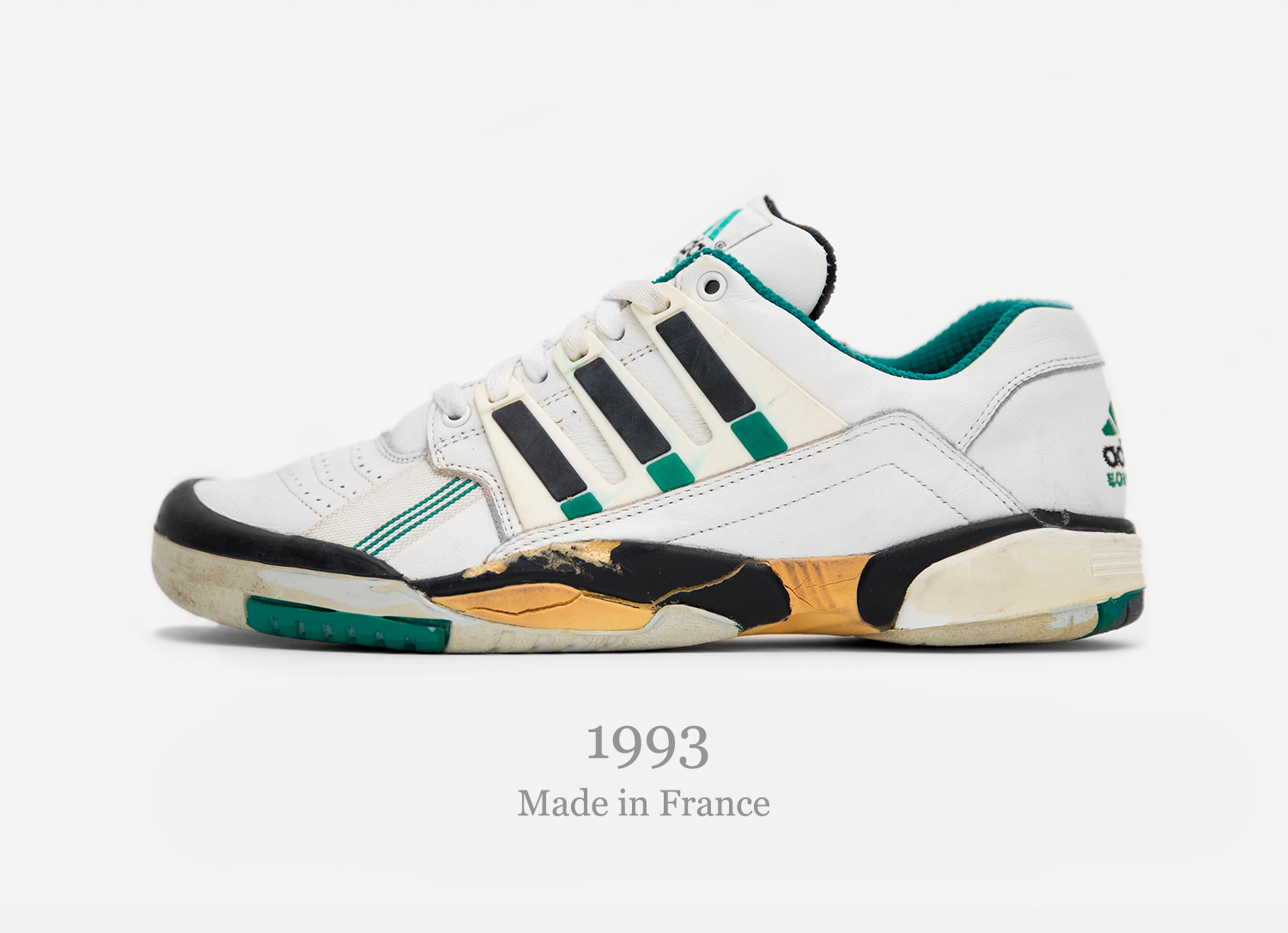 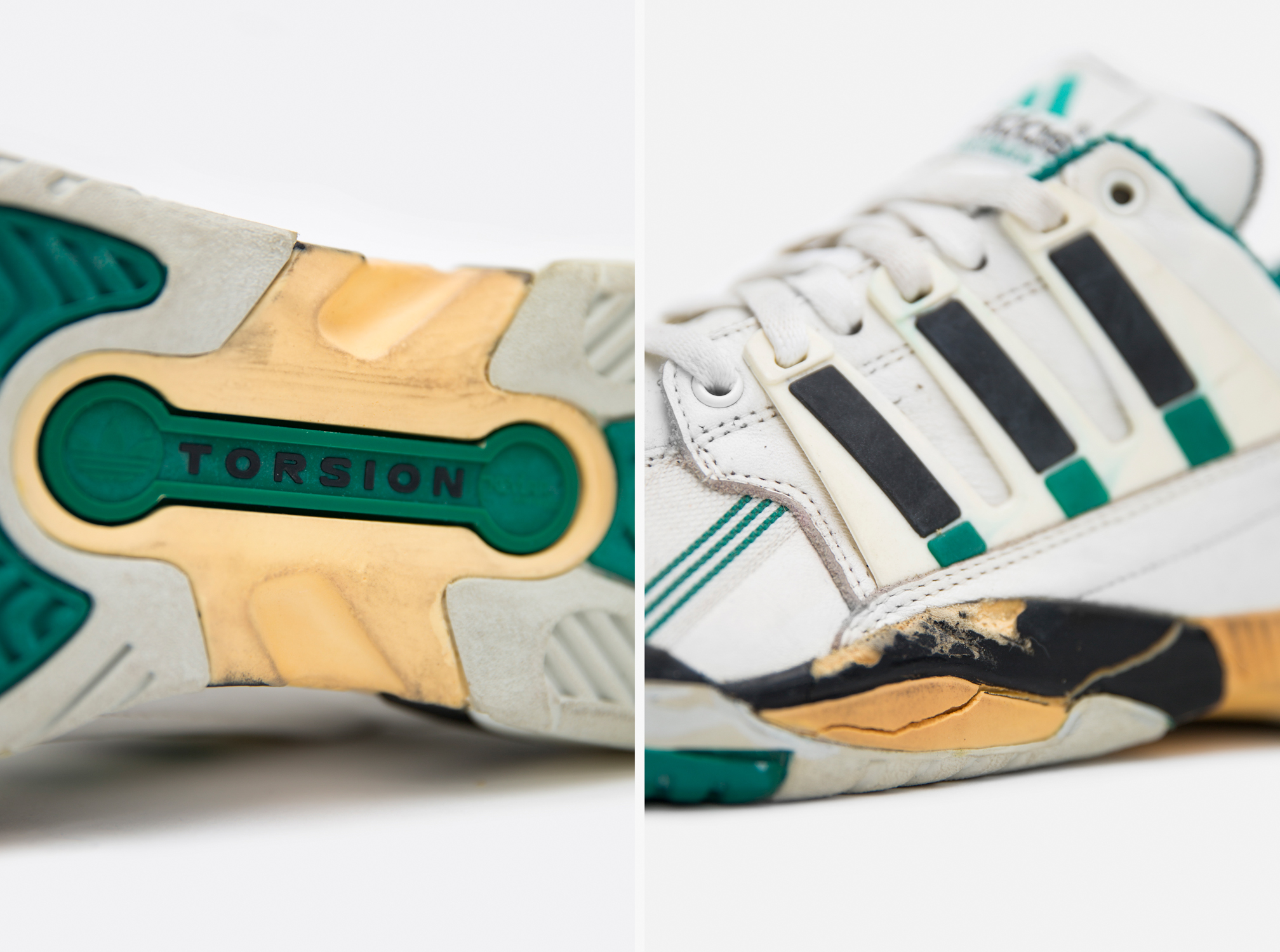 adidas Equipment Tennis Clay Court - Made in France (1993) Following in the footsteps of its much simpler descendants from decades gone by (the Rod Laver and Stan Smith for example), Tennis shoes of the late 80's and early 90's begun to get slightly more technical in construction to aid performance. Styles like the Tennis Super and Stefan Edberg's signature model in 1986 were key in establishing a more rugged form to facilitate the more aggressive game. We actually have two slightly different variations of the Tennis Clay Court in our Lock-Up, one of which is Korean made and then there's this Made In France version. Unfortunately the EVA midsole hasn't manage to withstand the sands of time and has quite literally bitten the dust. 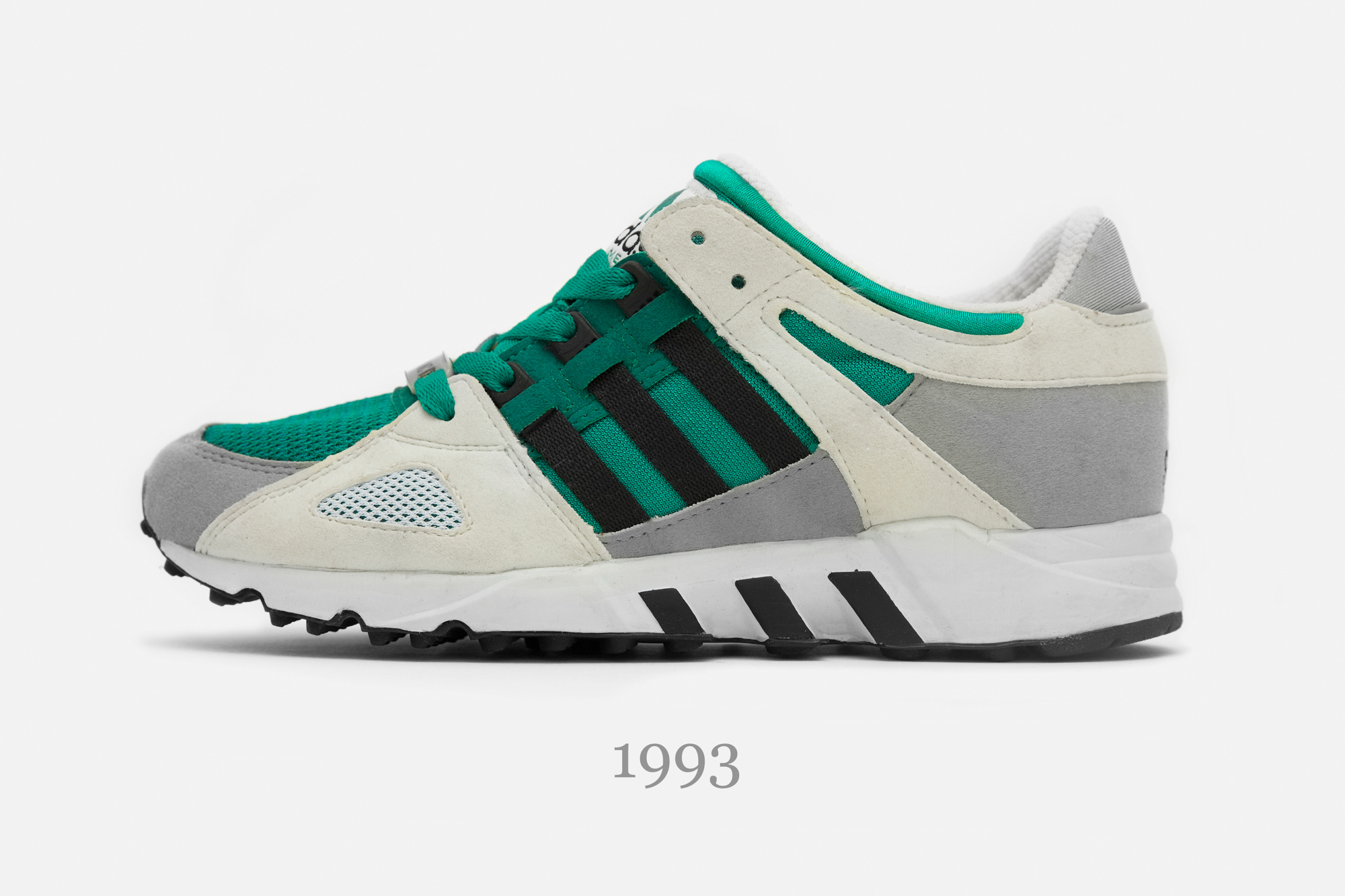 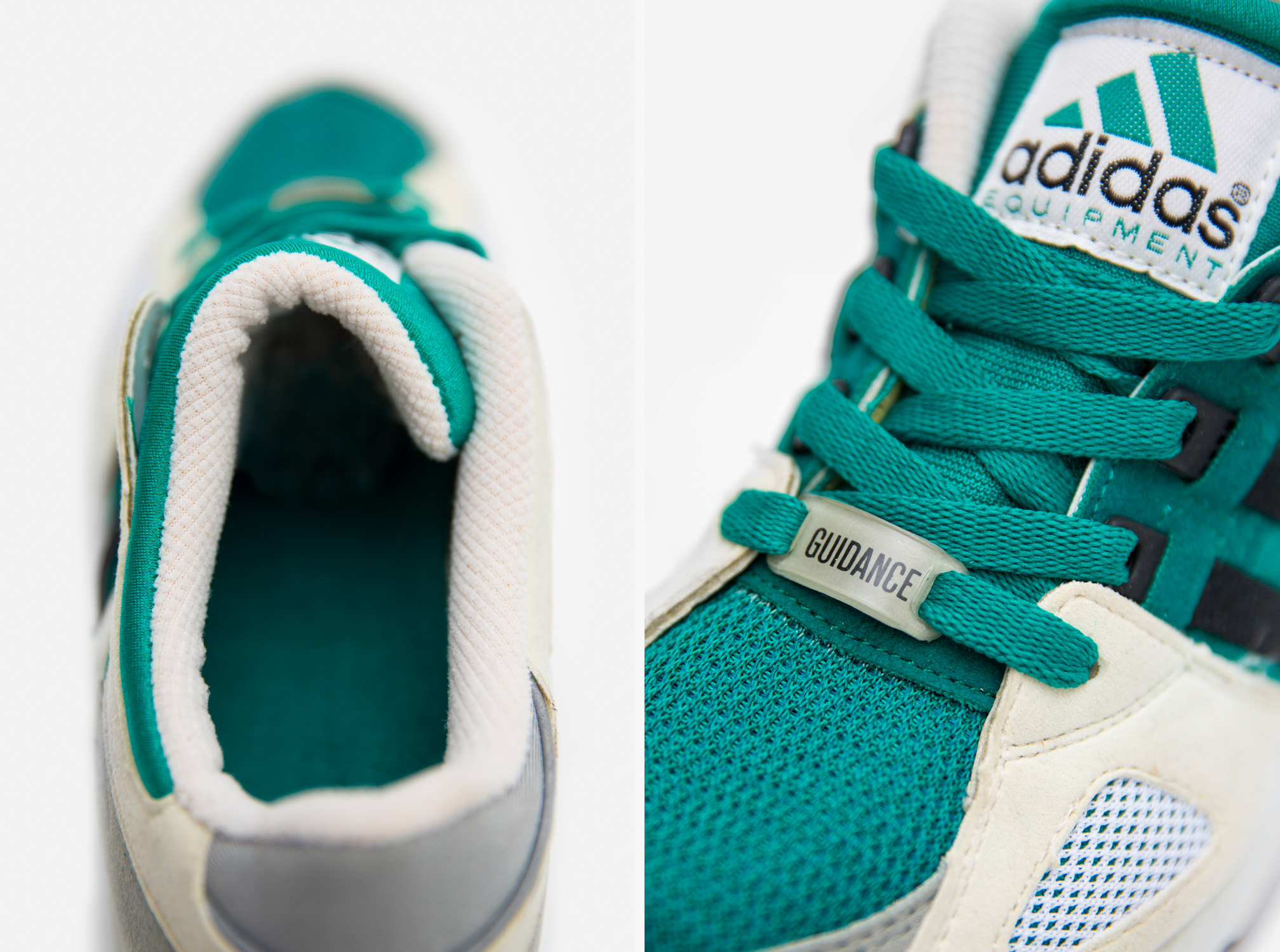 adidas Equipment Running Guidance (1993) One of the most recognisable and iconic runners that the EQT line birthed was the Guidance. Part of a trifecta including the Cushion and Support, each shoe was designed to serve a different runner dependent on how their feet worked, and whether or not they were in need of more stability and comfort. The tongue formation on each shoe differed to alter support around the ankle, with the Guidance utilising a medial fold. The nubbed midsole and added Torsion bar worked in harmony to both allow for flexibility in the midfoot and help to absorb shock upon impact. 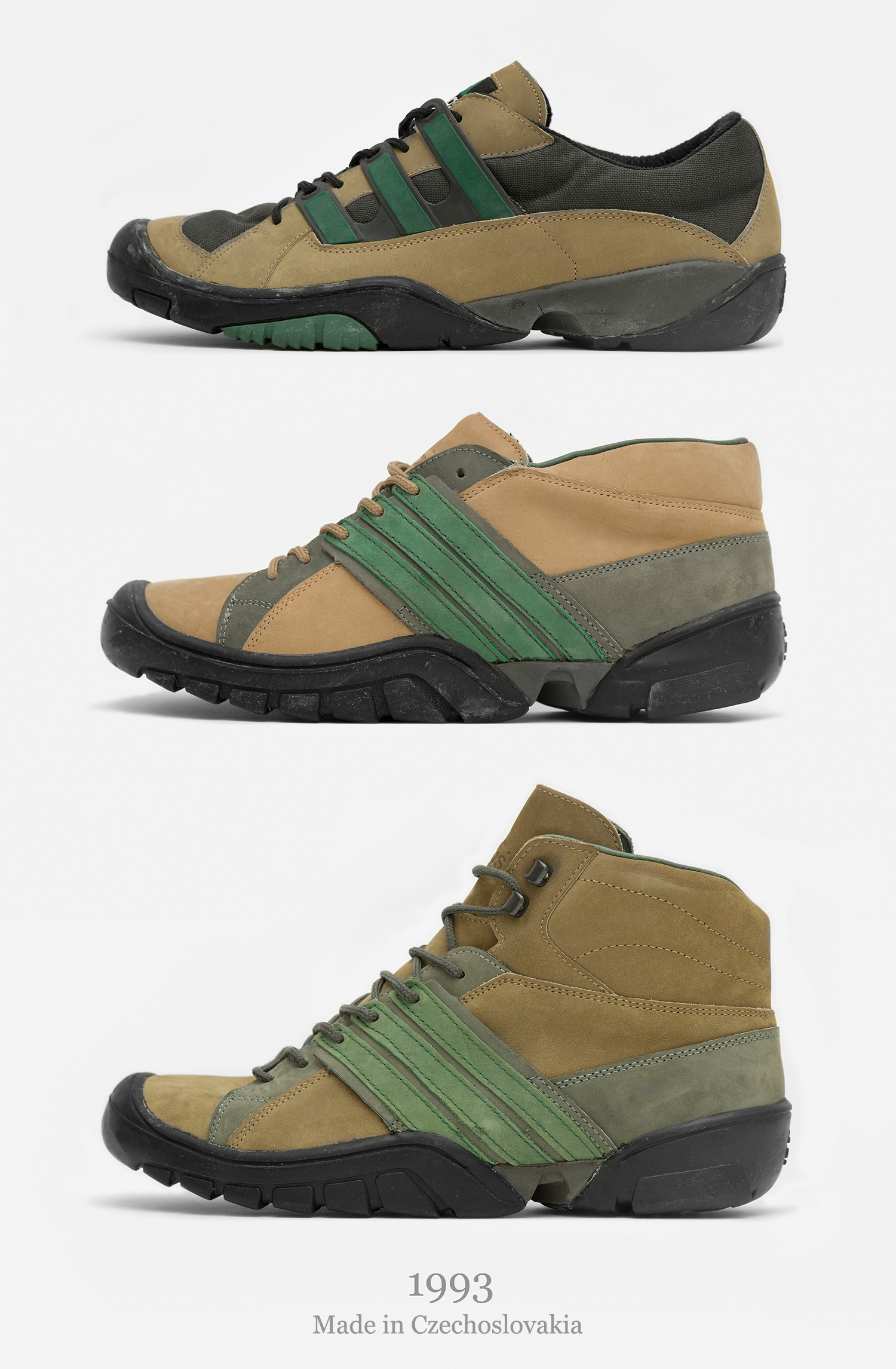 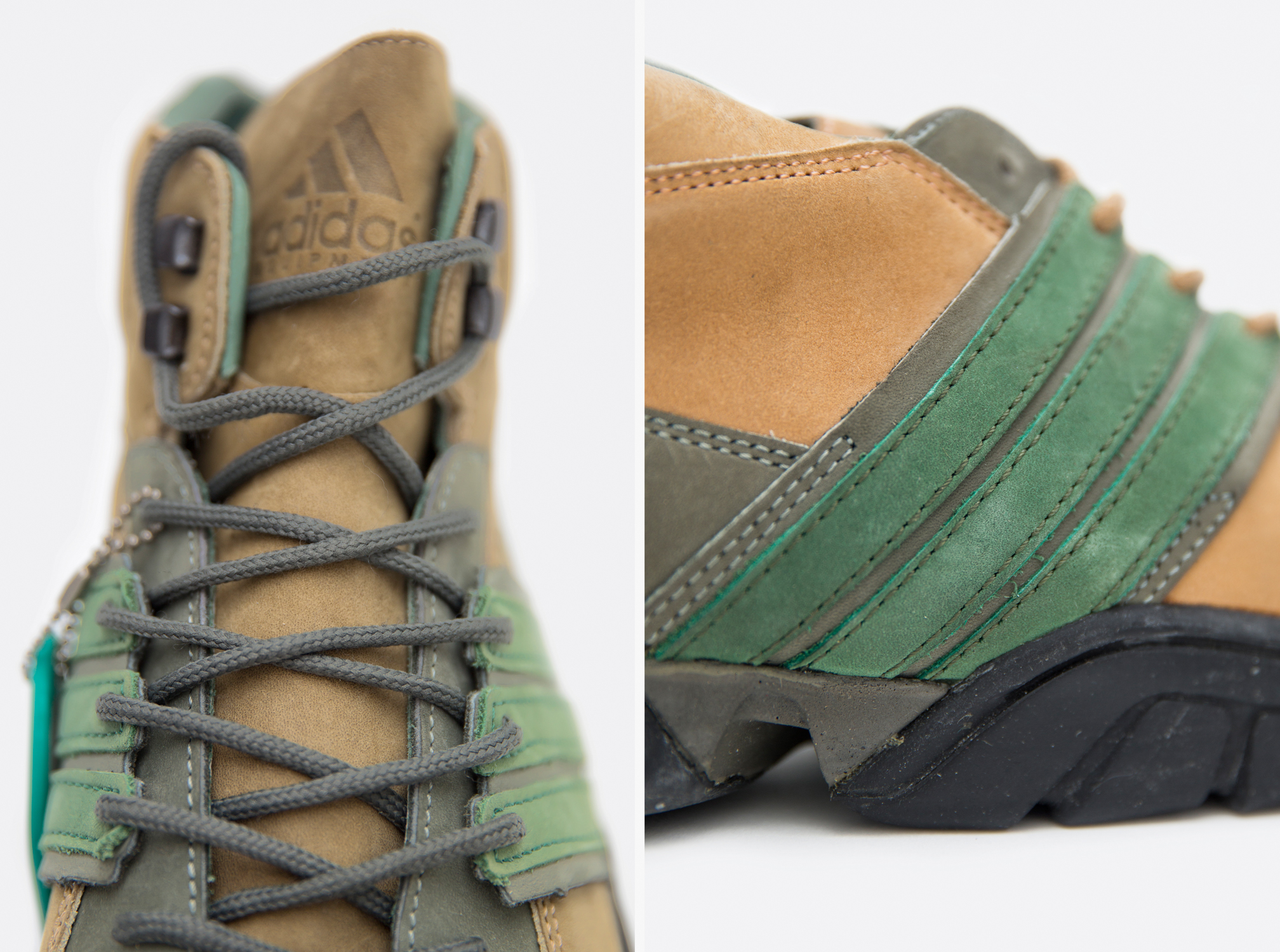 adidas Equipment Adventure Lo, Mid & Hi - Made in Czechoslovakia (1993) A follow on from the Adventure series available a few years previous, the moniker extended over into the EQT line and produced a great trio of styles. All were built with the wild in mind, with water repellant uppers and rubber toe caps that protruded from the midsole to ensure full protection. The Lo used a plastic Riemen system to hold the midfoot, while the Mid and Hi versions used layered leather panels. These two latter versions were almost identical if not for the extended collar on the Hi, complete with extended Lace hooks to strap yourself in. The ridged outsoles on all three meant they were great to use in conjunction with mountain bike pedals, as demonstrated in the original catalogue imagery (above). 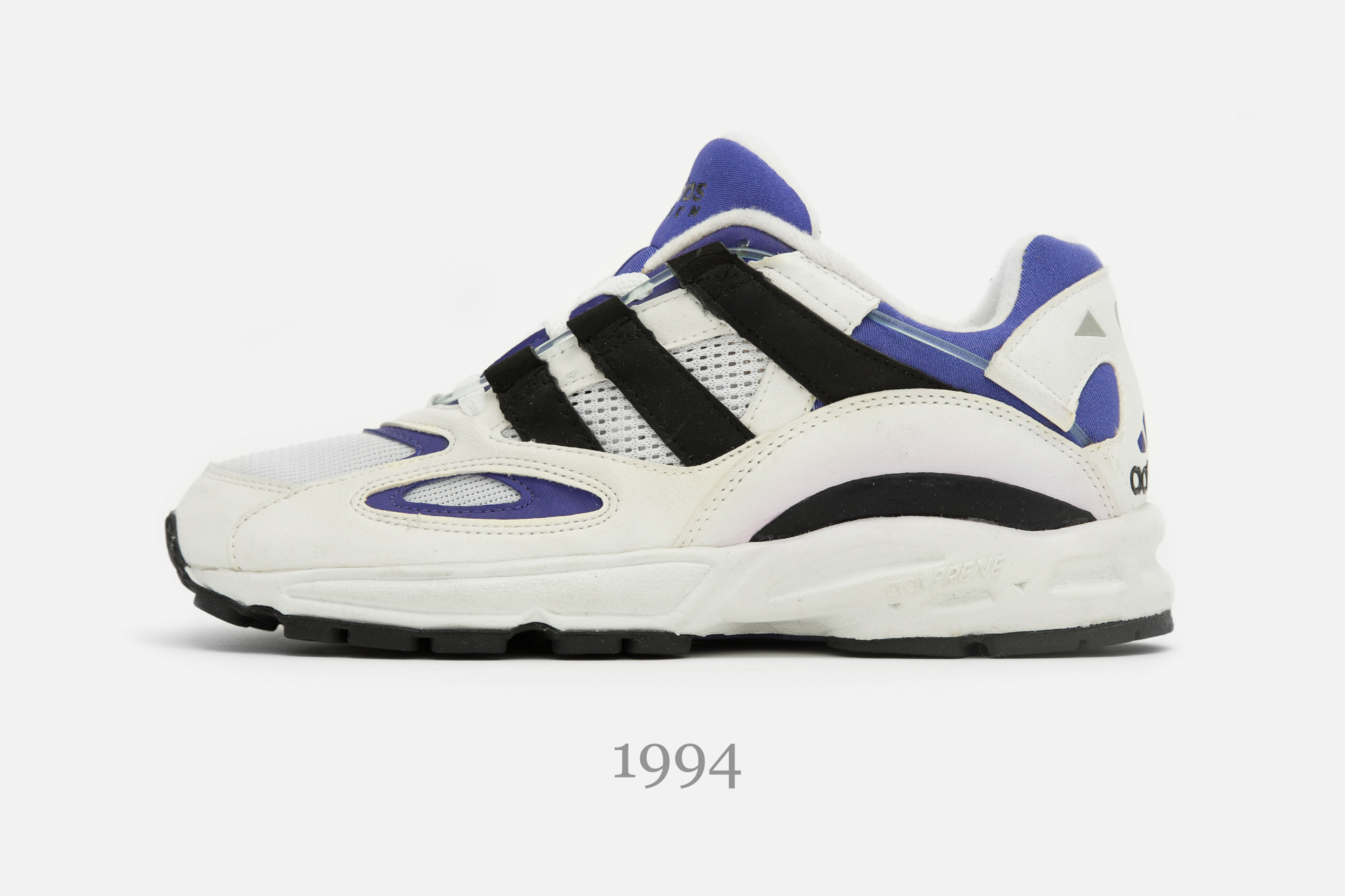 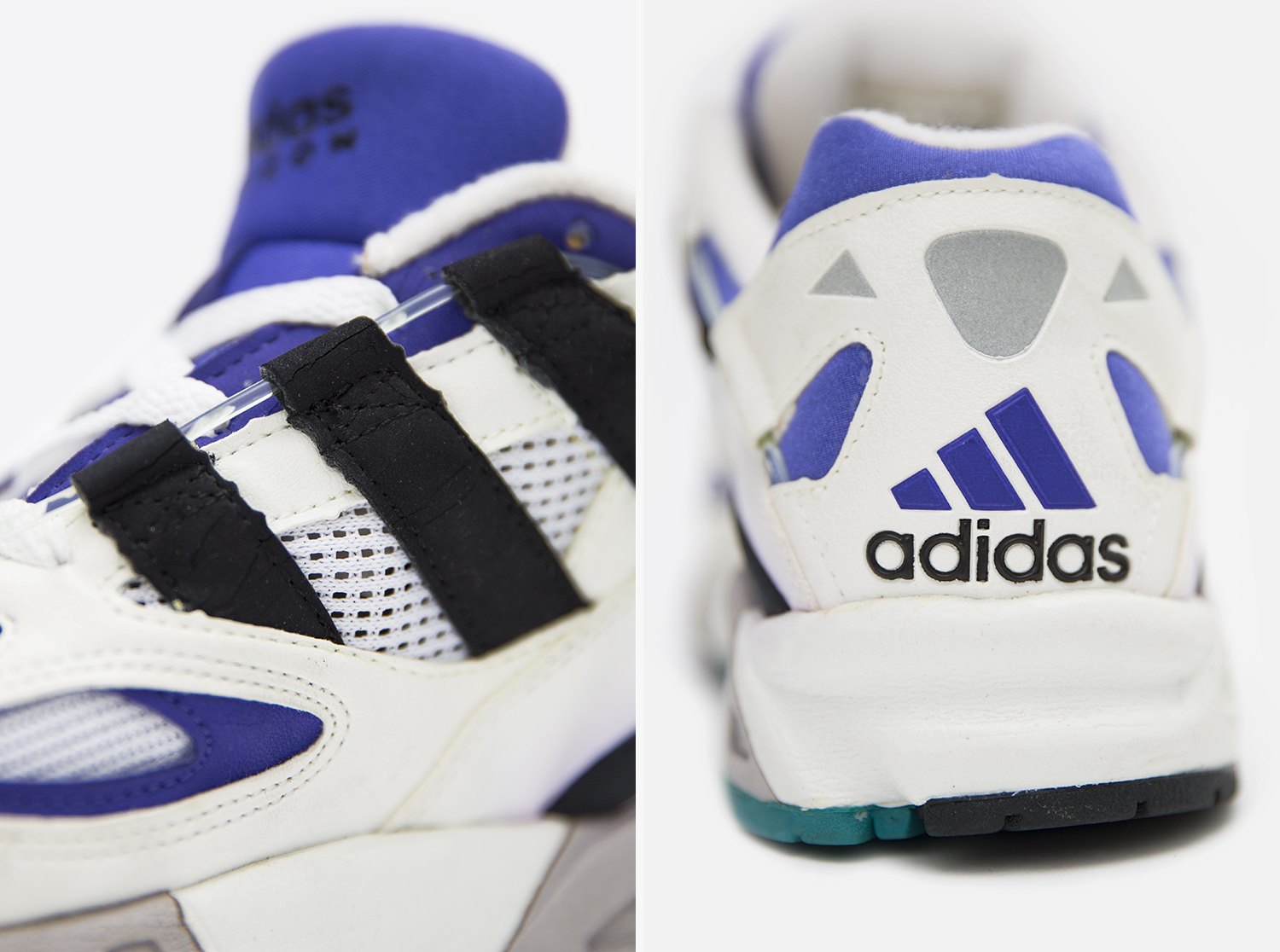 adidas Lexicon (1994) Although not falling under the 'Equipment' umbrella specifically, the Lexicon was an advanced runner of it's time and almost instilled the mindset of EQT within it's DNA. The Lexicon used cables that connected the Forefoot and midfoot to the heel to maintain structural integrity. This helped to give an equal distribution of pressure across the entire shoe and in turn provided the optimum fit. 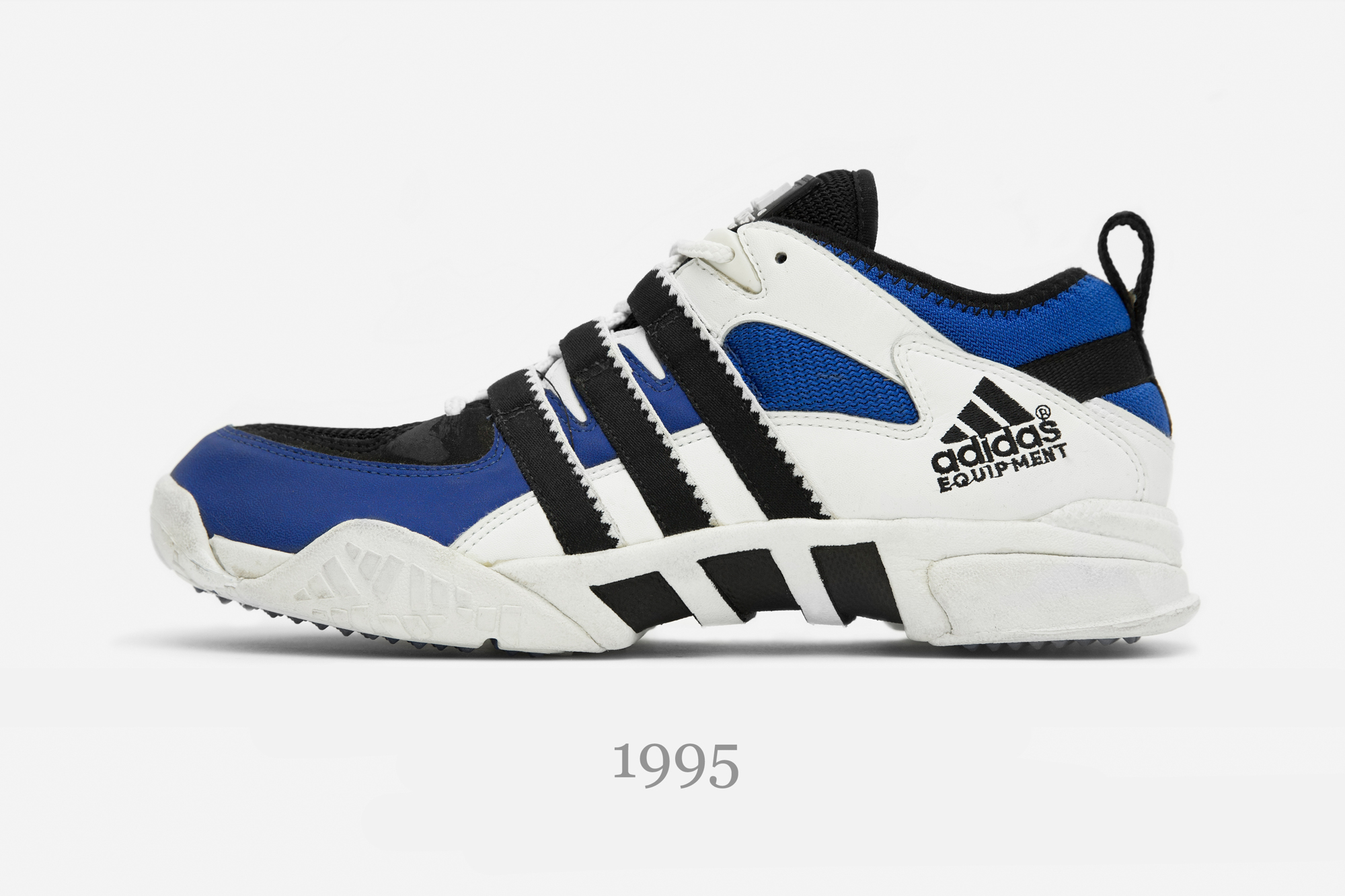 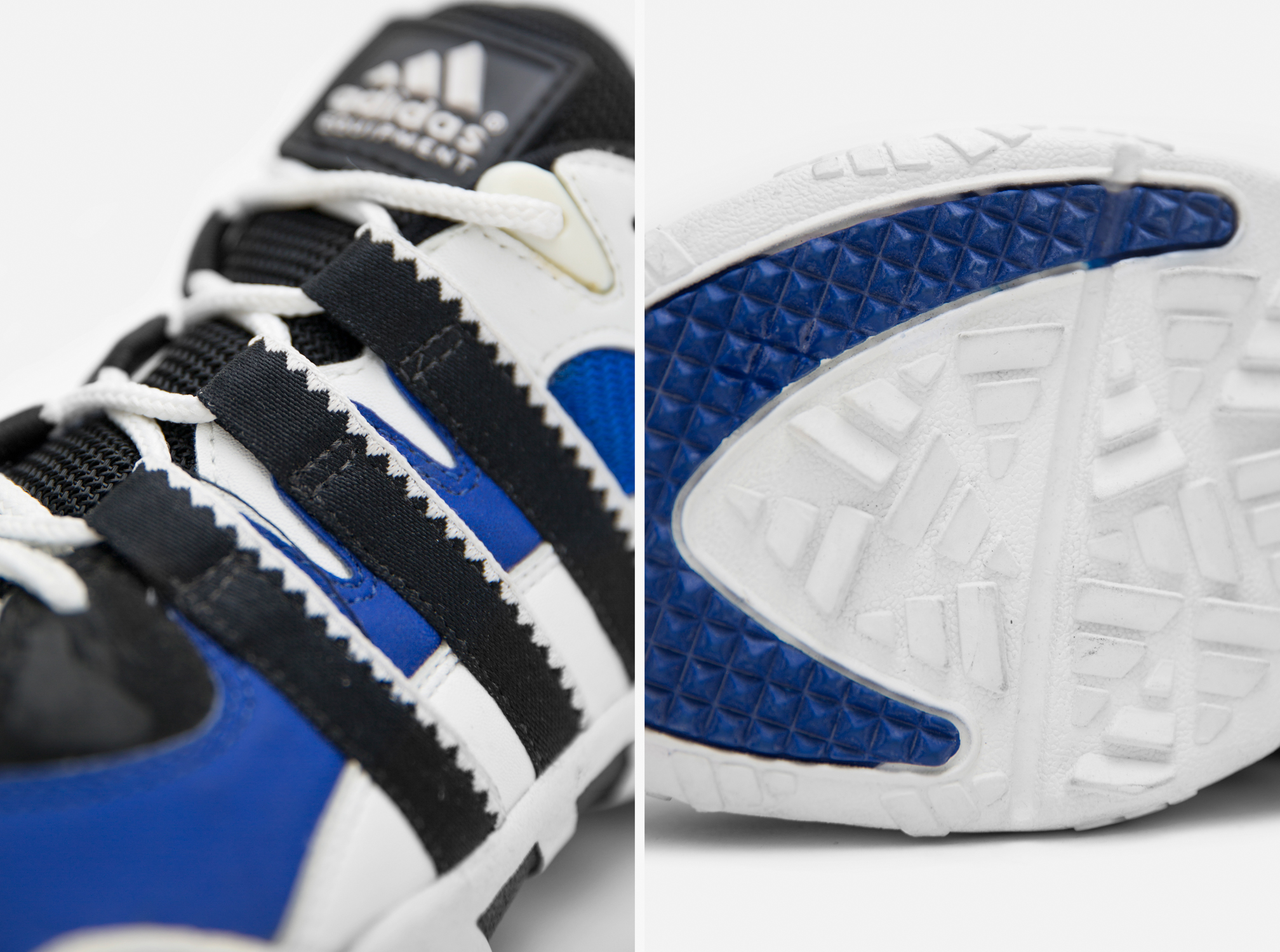 adidas Equipment 4.3 (1995) Part of the cross training department of EQT, the 4.3 was a tool used for cardiovascular exercises on outdoor surfaces such as grass and astro turf. A unique branded traction grip was added to the outsole to help you keep your feet on the floor at all times, and the Rieman straps extended right down to the midsole, graphically continuing all the way underneath the shoe (perhaps the pre-emptive styling inspiration behind 2002's Predator Mania?). 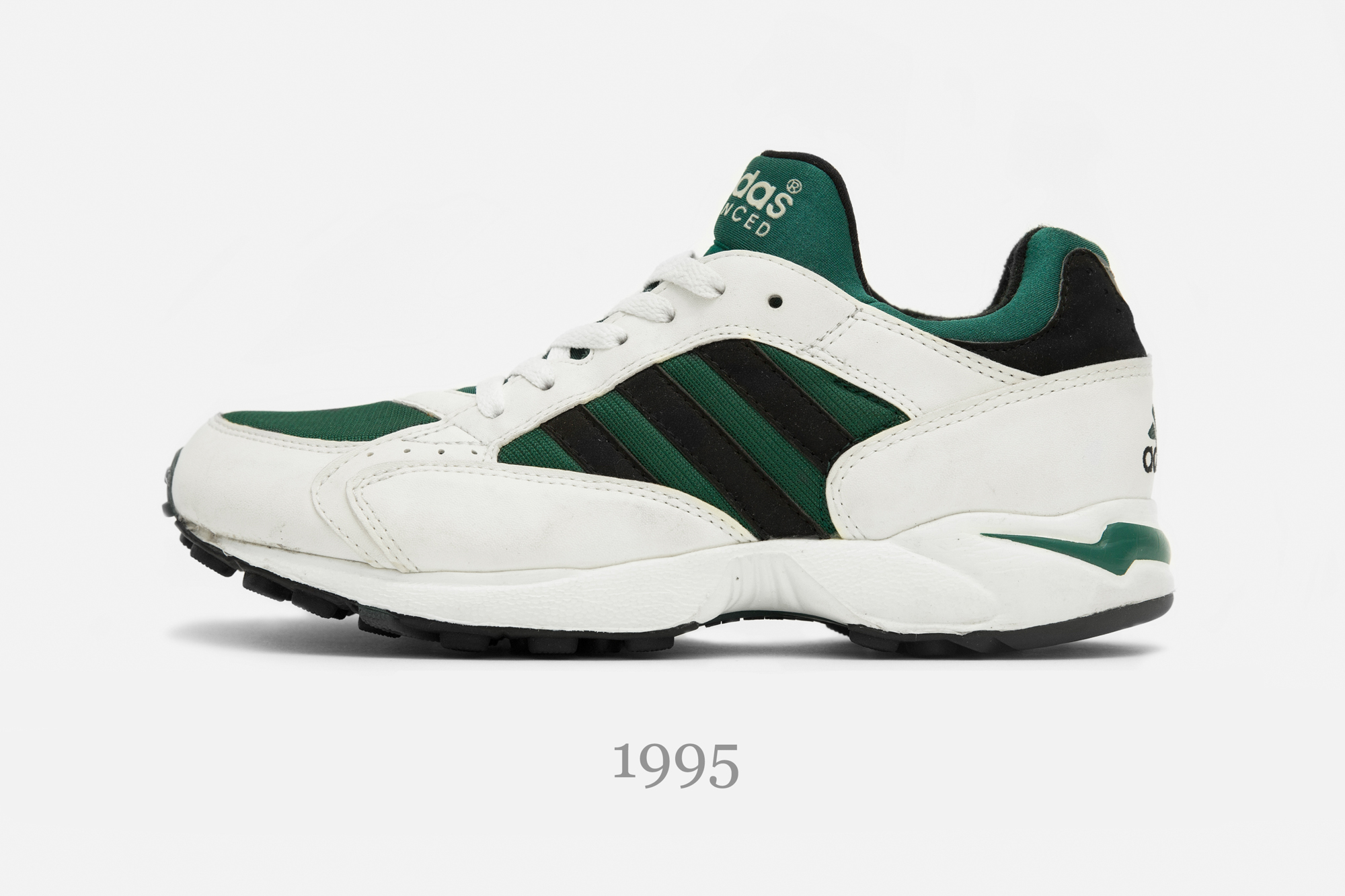 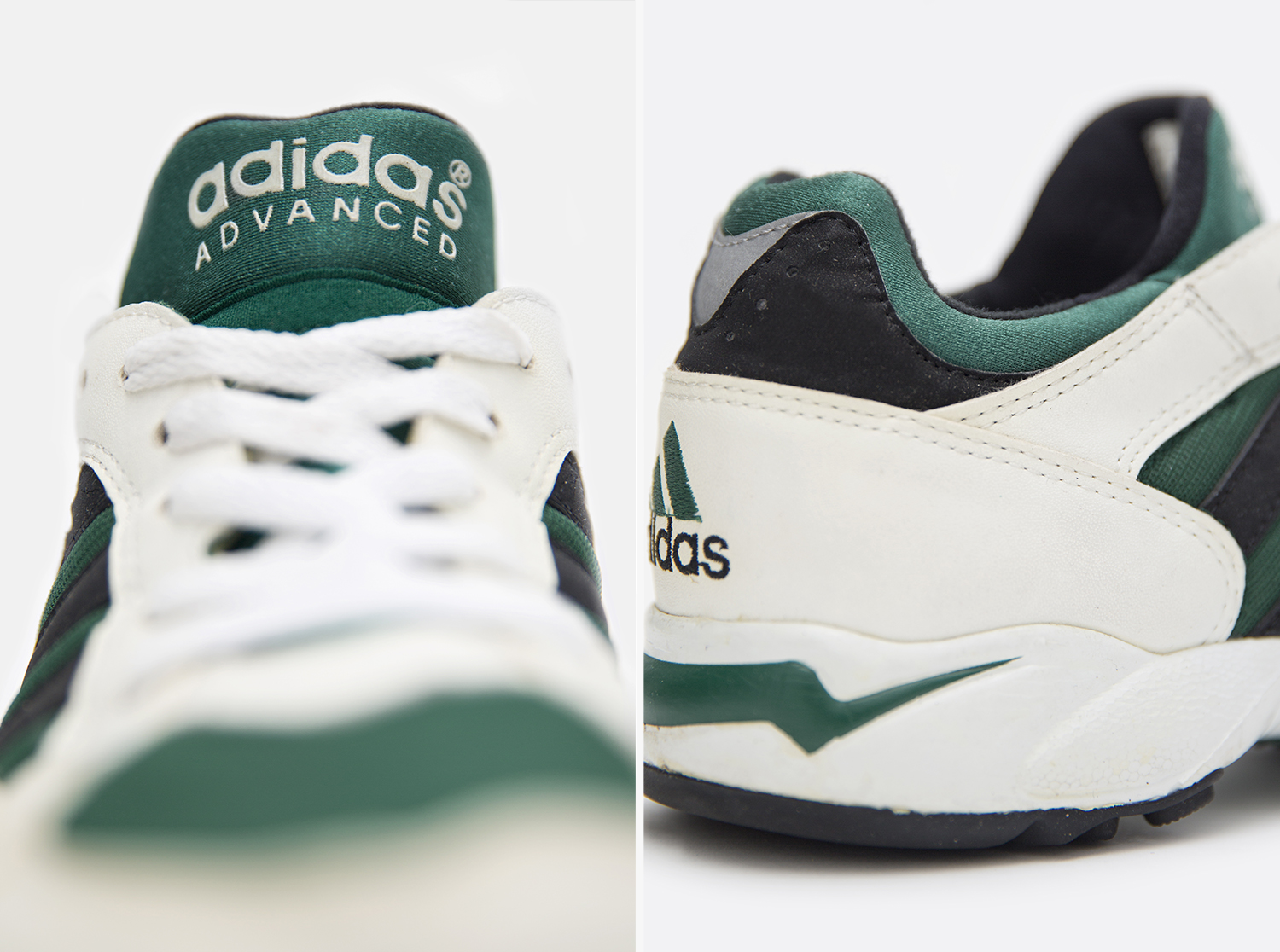 adidas EQT Advanced (1995) Contrary to the single support bar used in it's elder siblings, the EQT Advanced changed things up with a Cross Torsion system, further enabling more flexibility across the midfoot. A wraparound neoprene sockliner hugged the foot to tick comfort off the checklist, and high quality leather panels were applied across the upper (in some cases three layers deep) to withstand everyday pavement pounding. Advanced was a shoe that suited both the casual runner, as well as the dedicated athlete out on the streets everyday. 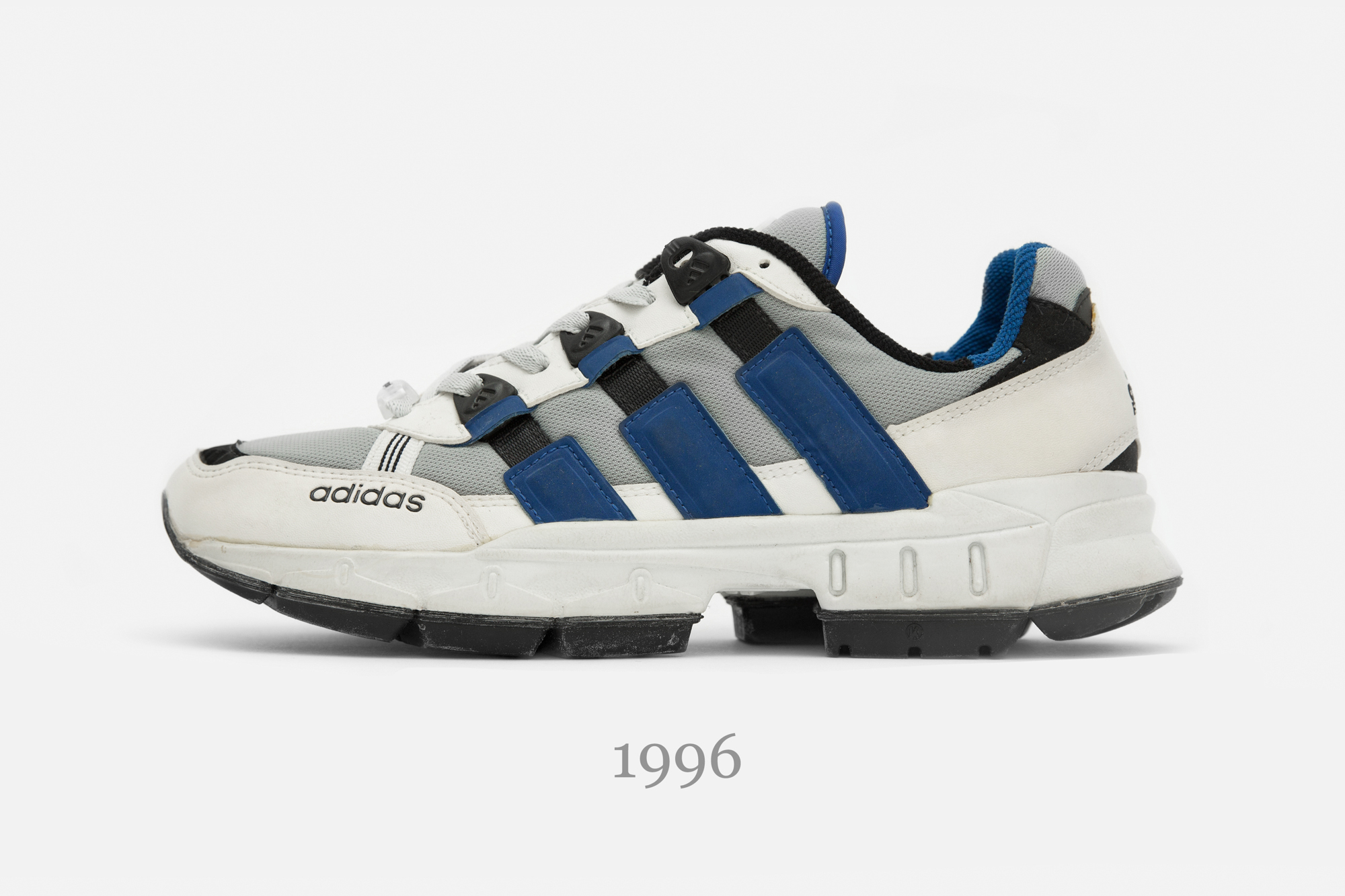 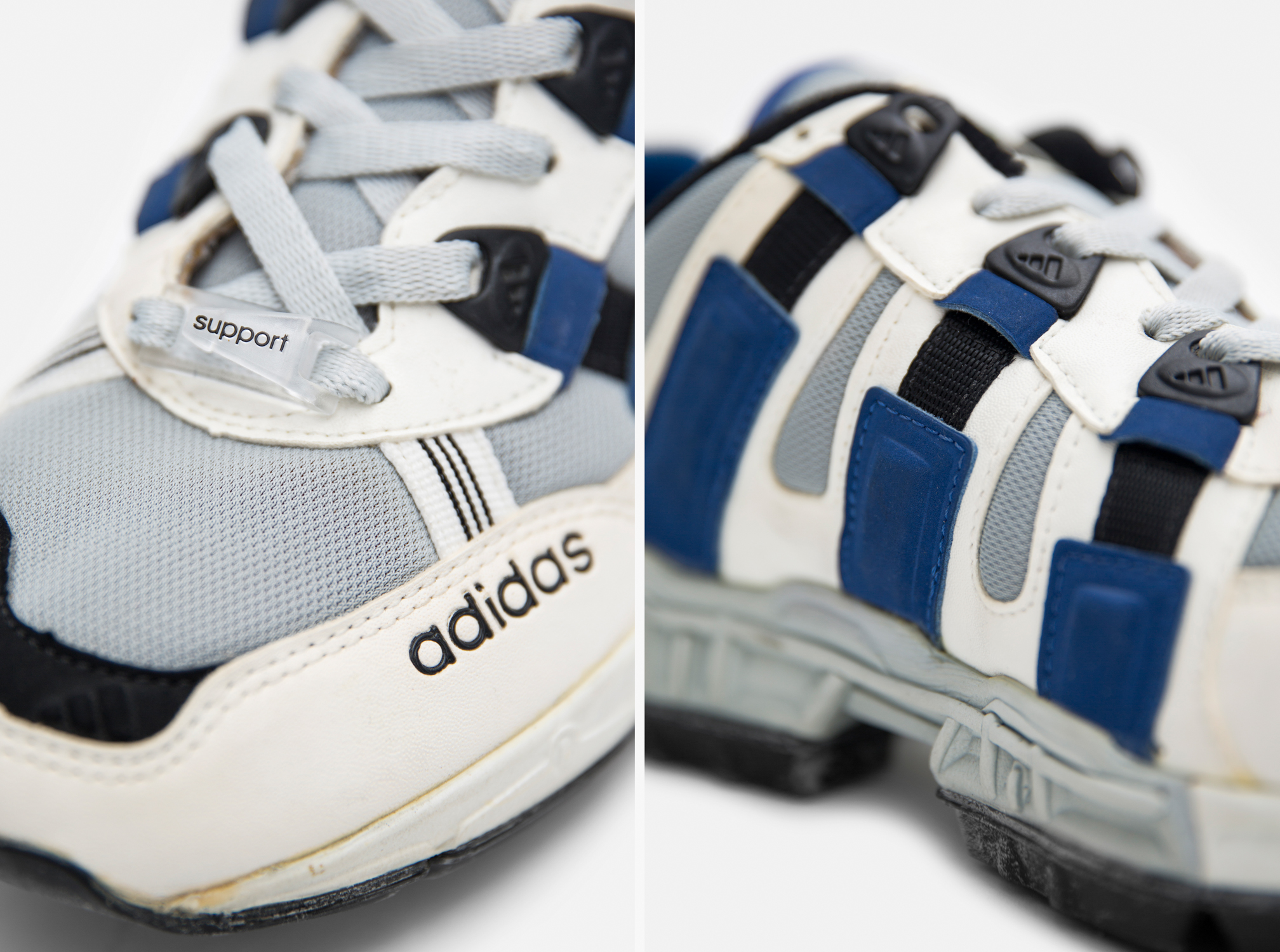 adidas EQT Support II (1996) Stability has always been a key feature in many of adidas' top running shoes, and the 90's saw a serge in experimental ways of improving this important requirement that makes the difference between having a great race, and rolling an ankle! The Support II featured a new 'Point of Deflection' system within the body of its midsole. Constructed out of hollow, air filled chambers, once the foot struck the ground they would flex to absorb the shock and instantly repell the force by returning back to their original form. This aided runners who experienced over-pronation, whereby their weight is shifted too fast from one side of the foot to the other. An additional novelty detail, the Support also featured a branded Lace jewel that allowed you to clip in your laces to keep them out of the way when running. 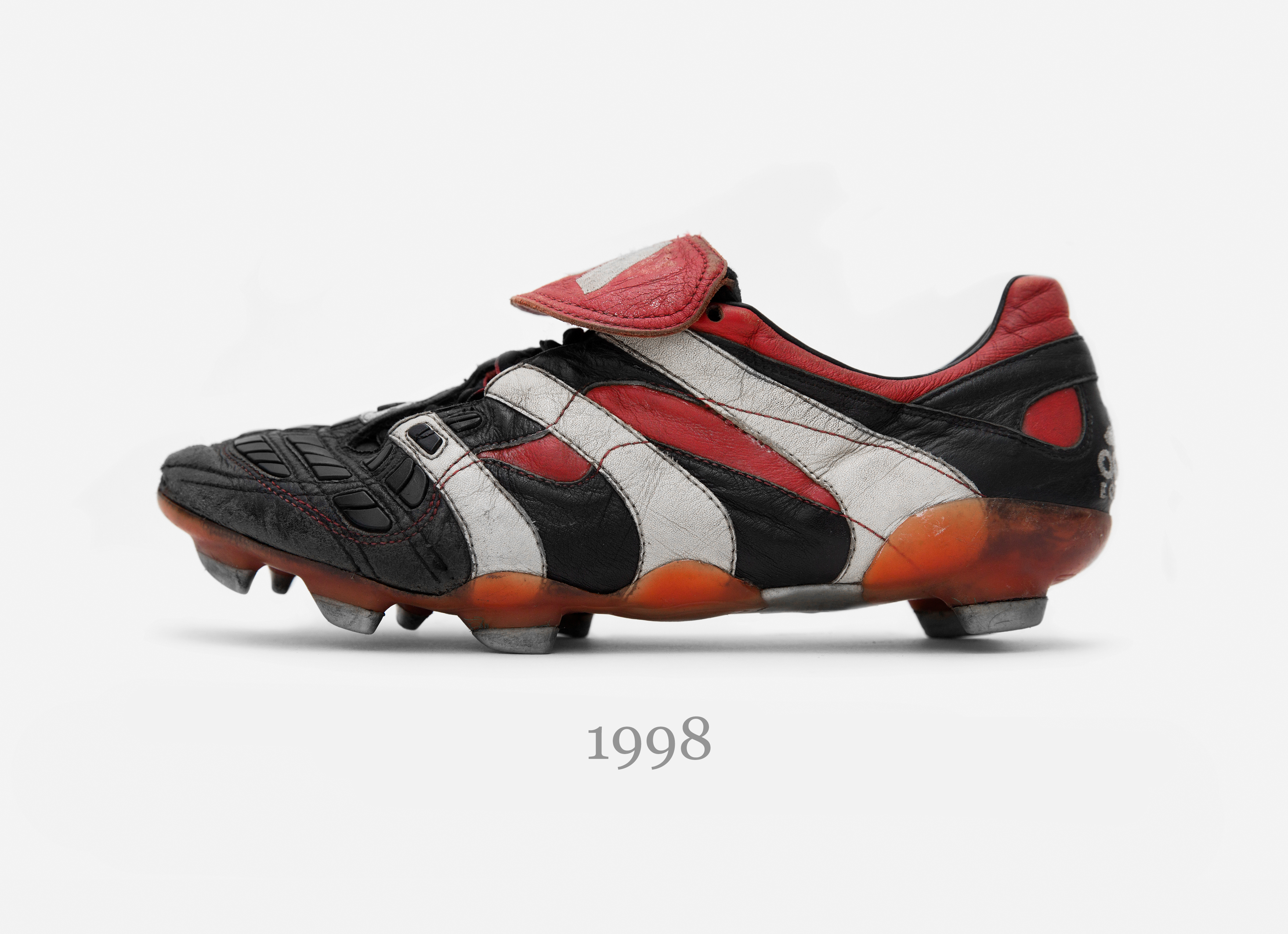 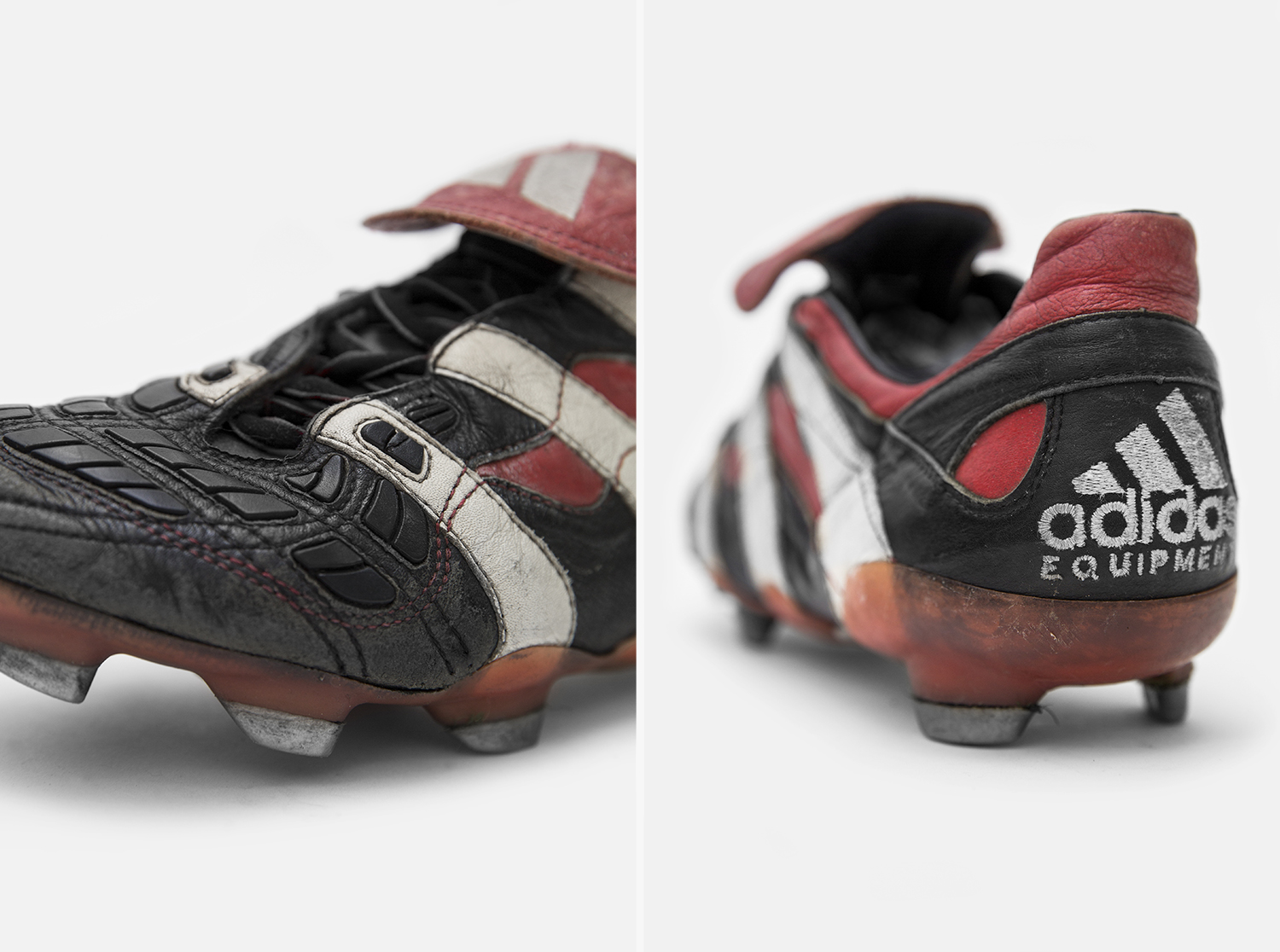 adidas Equipment Predator 'Accelerator' (1998) 1994 saw an escalation in styling from the run of the mill black & white Copa Mundial offering. 4 years prior to the initial launch of the first style, ex-Liverpool player Craig Johnston began experimenting with adding texture to the toebox of a boot after a chance encounter with a youth team asking him to coach them. Instructing them how to 'swerve' the ball, he likened the motion to that of a table tennis player and his bat. After discussion with the team about their difficulties using leather boots in the rain, Johnston rushed home and ripped the surface of a table tennis bat off and strapped it to one of the lads boots with elastic bands, and sure enough, this texture enhanced the touch by 'biting' the edge of the ball and causing a spinning motion. After several back and forth's with adidas (who at first wouldn't touch the idea), a co-sign from Franz Beckenbauer sealed the deal and the technology began development with the Three Stripes. Of all the releases across the Predator's 20 year lifespan (RIP), one of the crowd favourites and most visually arresting is 1998's Accelerator. adidas' figurehead boot of choice for the 98 Coupe du Monde held in France, and was seen on the feet of some of the worlds best players. Most famously represented by Zinedine Zidane and his French national team, and England's own David Beckham who had been a Predator advocate from the very beginning. Shop our current selection of adidas Equipment product from selected stores and online at size?. Save Save Save Save Save Save Save Save Save Save Save Save Save