Throughout the 90's, Nike led the way in developing some of the most groundbreaking footwear design of the decade, and a real technological benchmark had been set within performance footwear in defining the ultimate in comfort. What was next? How could everything be bettered? 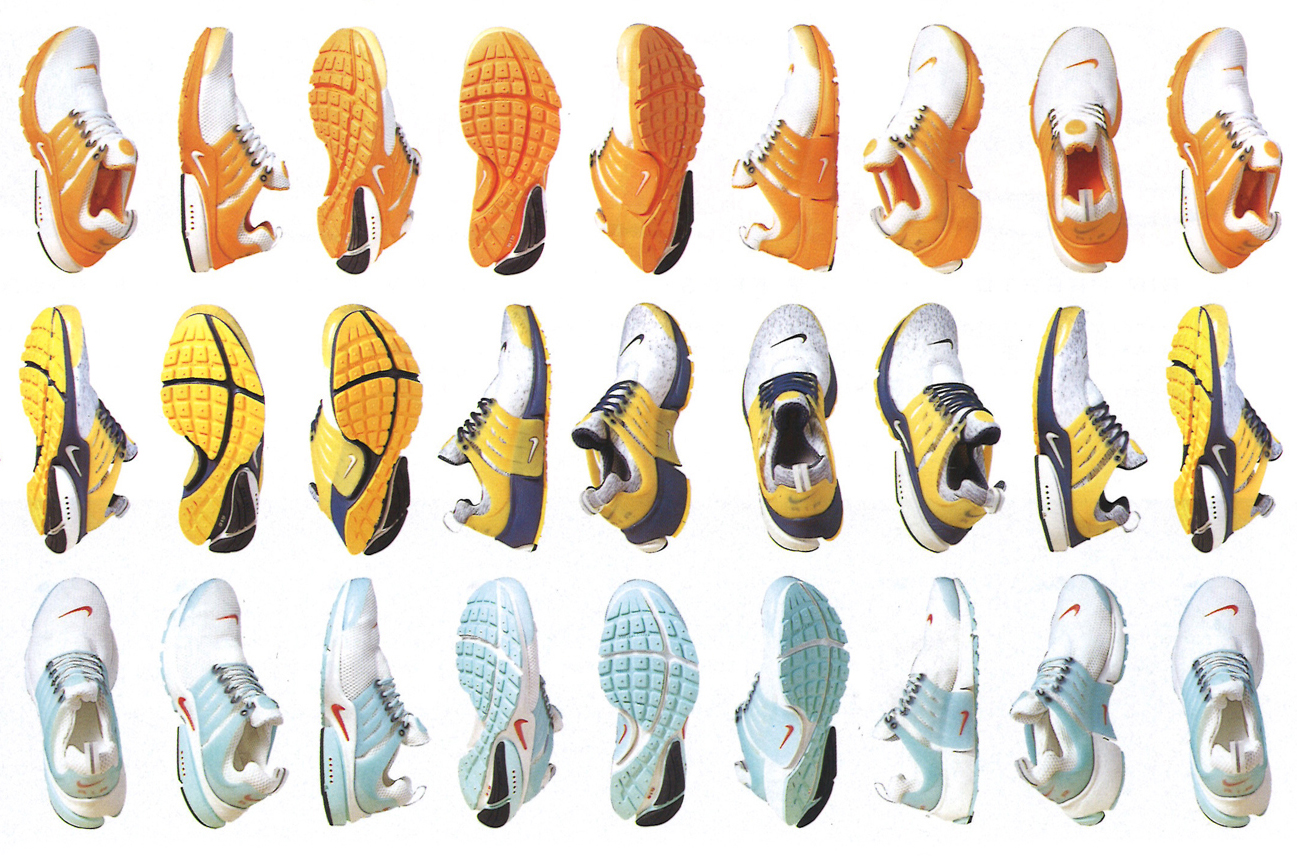 Designing an Innovative Product Project co-designer Tobie Hatfield detailed that the aim of the Air Presto was to enable your foot to take control of the shoe, rather than vice versa, giving you as natural a ride as possible while on the move. The form-fitting sock upper gave your foot the maximum in flexibility and room for toe movement, whilst still maintaining adequate support with its construction. With your foot secured inside the shoe, the side lace cage allowed for additional lockdown. With ‘the perfect fit’ configuration, the Presto was marketed as being the 'T-shirt for your feet’, further reflected in the sizing options which ranged from XXXS–XXXL rather than the standard numeric system.  The Presto itself was a forerunner to the Nike Free program which further developed the idea of giving the runner the feeling of travelling barefoot. With Richard Clarke at the design helm alongside Kevin Hoffer & Bob Mervar among many other creative talents, the Presto was originally conceived as part of the Alpha Project, a Nike initiative introduced in the late 90’s aimed at creating product that utilised statement level technology within it’s category. Silhouettes created under the project were highlighted with a 5 dot insignia incorporated into the design, and included abstract styles like the Air Shox series, Kukini, Seismic and the Flightposite. 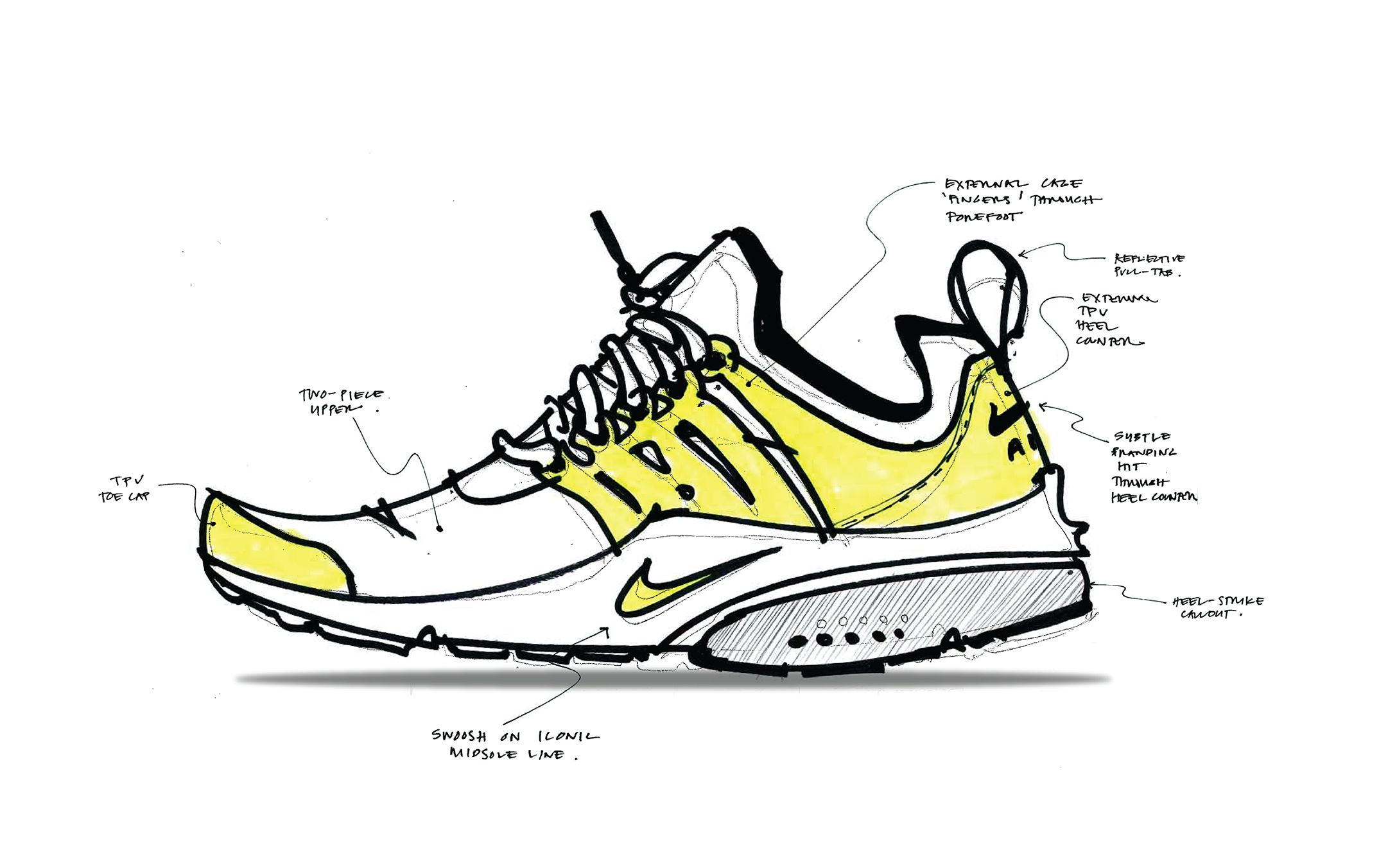 The original colour-ups and plastic detailing are said to be inspired by Apple’s Imac G3 and their transparent casings, allowing you to visibly see the technology at work.  The neoprene and breathable mesh uppers sat atop a lightweight Phylon midsole, with a cushioned Duralon outsole for traction.  The plastic toe tip eventually progressed into a design element of the bobsled shoe the Zoom Slider, included to provide additional protection to the racers feet. 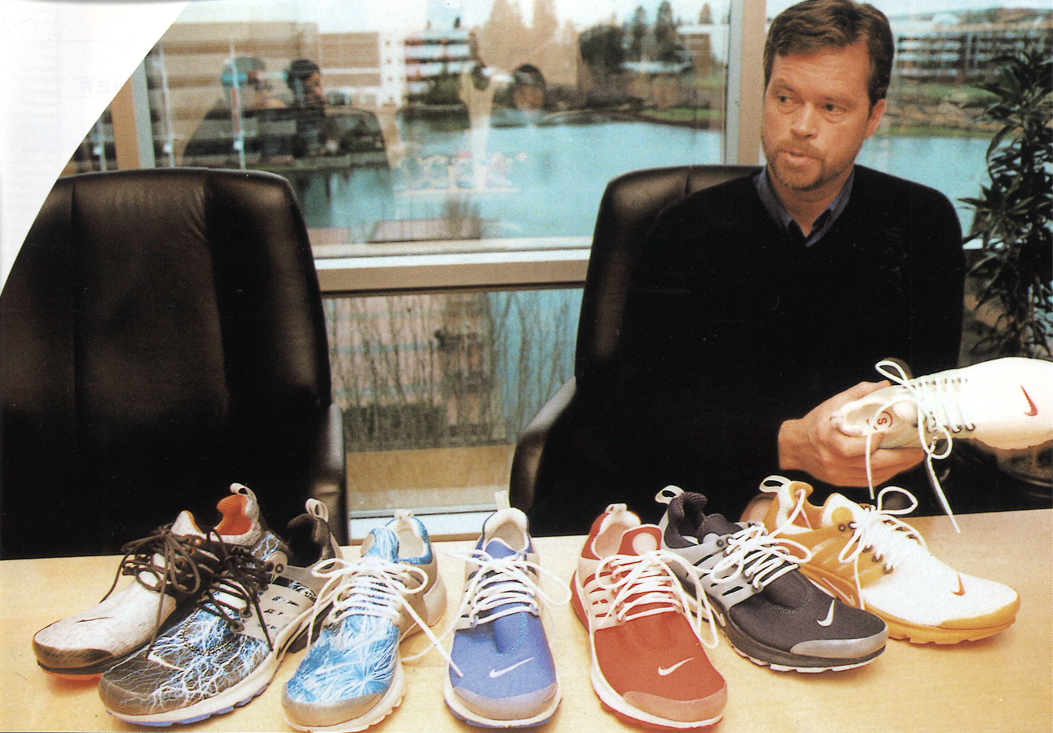 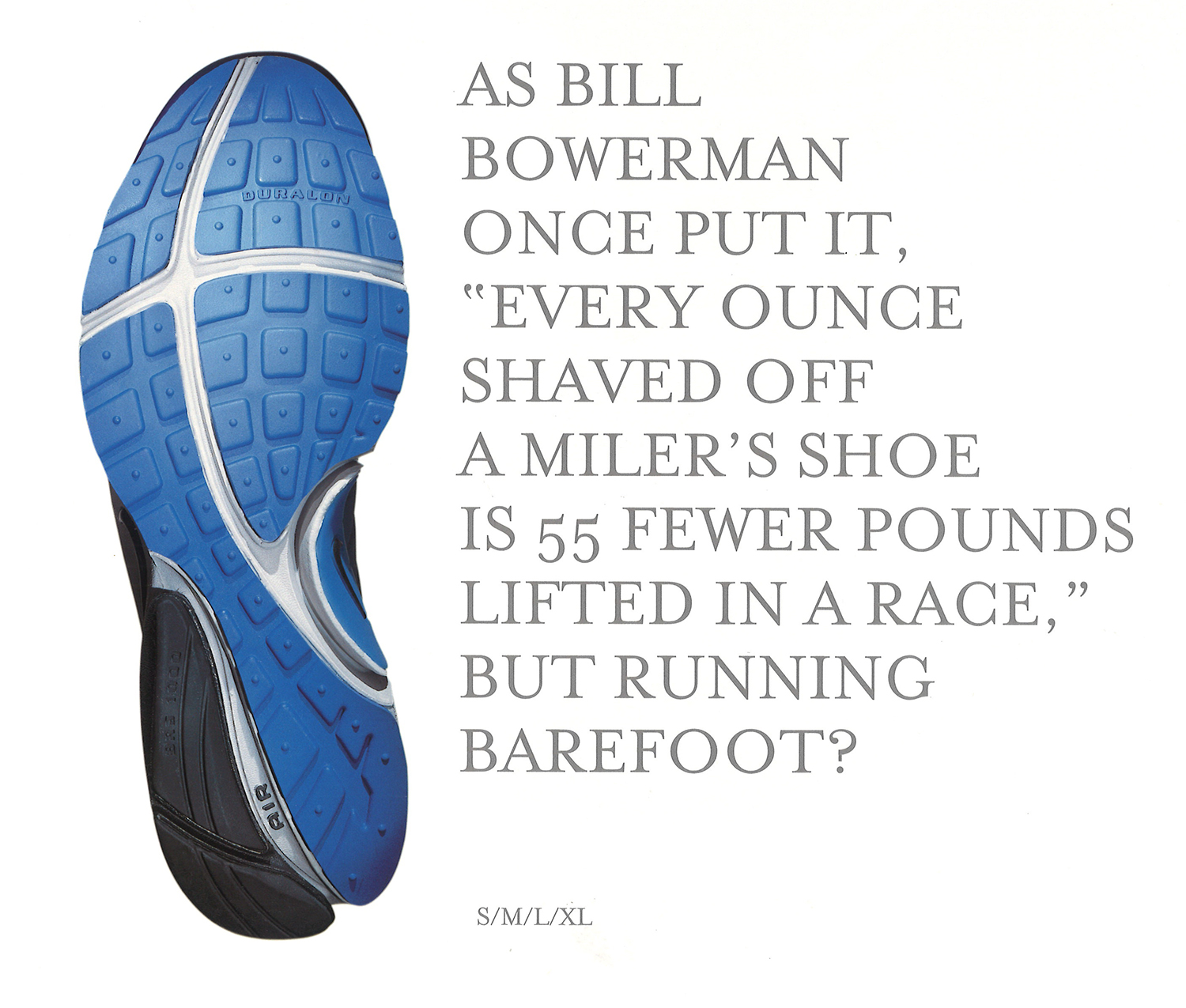 Creative Marketing Strategy Upon its original release in 2000, a total of 13 colourways were introduced, and each were given an elaborate nickname to hint at their colourway and fabricate a persona for each pair. This served as a great foundation for promotional activity, which initially came in the form of animated TV spots produced by Dylan Lee for Wieden & Kennedy. The 13 nicknames were: Brutal Honey, Trouble at Home, Unholy Cumulus, Shady Milkman, Rabid Panda, Orange Monk, Jack Mackerel, Migraine Fly, Presto Bill, Catfight Shiner, Rogue Kielbasas, Abdominal Snowman, and a final thirteenth colourway which was never given a moniker. 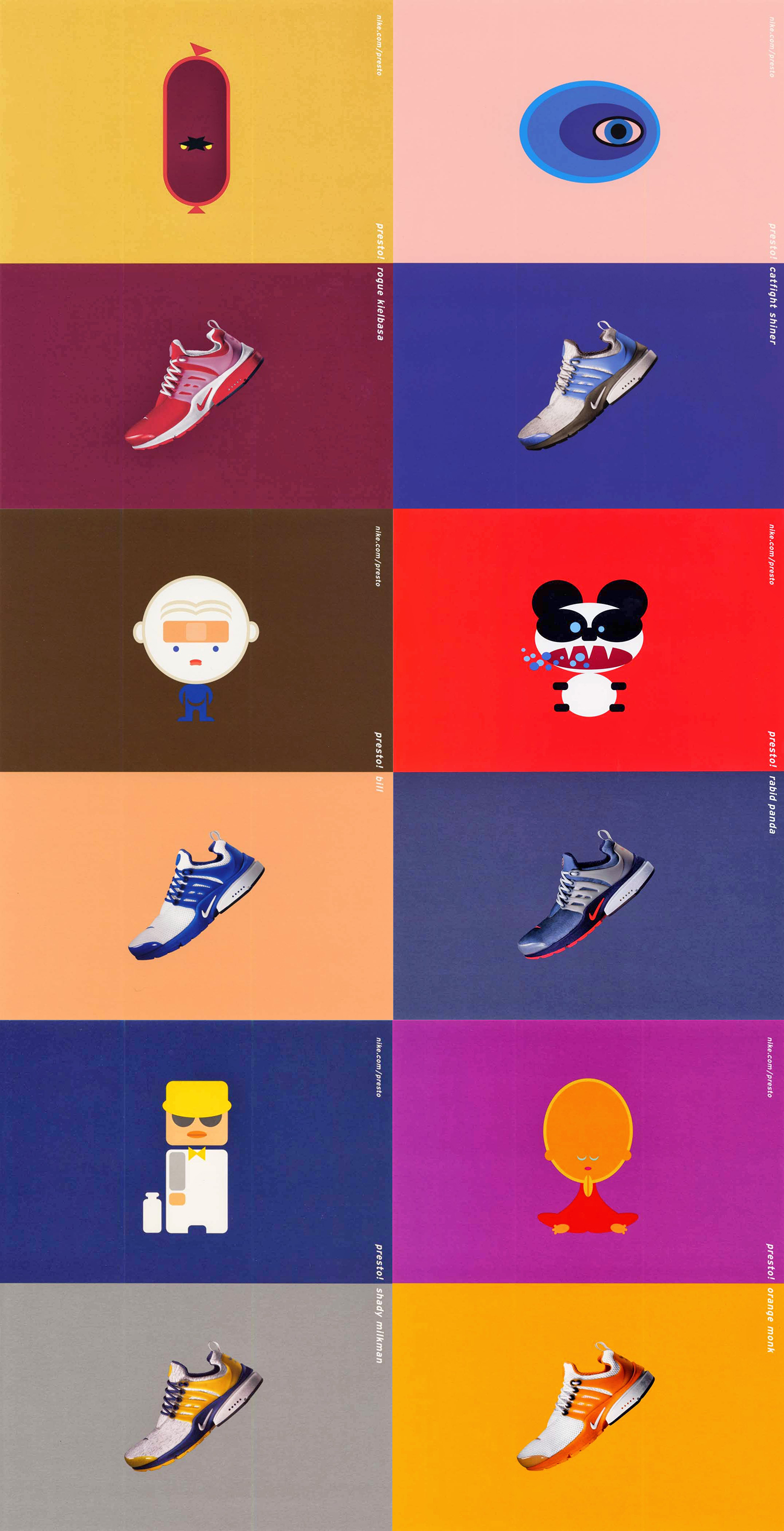 https://www.youtube.com/watch?v=8VoCF5TMOyo The Presto line has often been recognised as one of the first shoes to utilise a digitally printed graphic on it's neoprene upper, with the 'Trouble at Home' style leading the way as one of the most recognisable among collectors.  As a Nike designer at the time, Steven Smith (father of the New Balance 1500, Reebok Insta Pump Fury) created a special one off chequerboard printed Presto for guitarist Rick Nielsen of the band Cheap Trick, known for plastering his guitars with the same pattern.  This was later picked up by Nike Japan and introduced into their Nike iD program for a limited period (image below is one of the iD versions owned by Hiroshi Fujiwara). 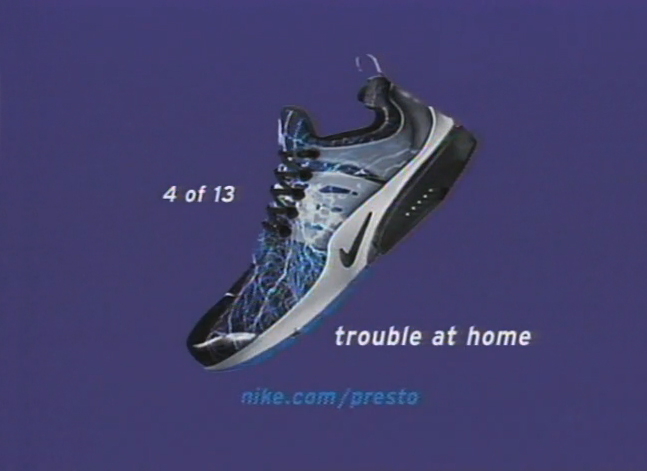 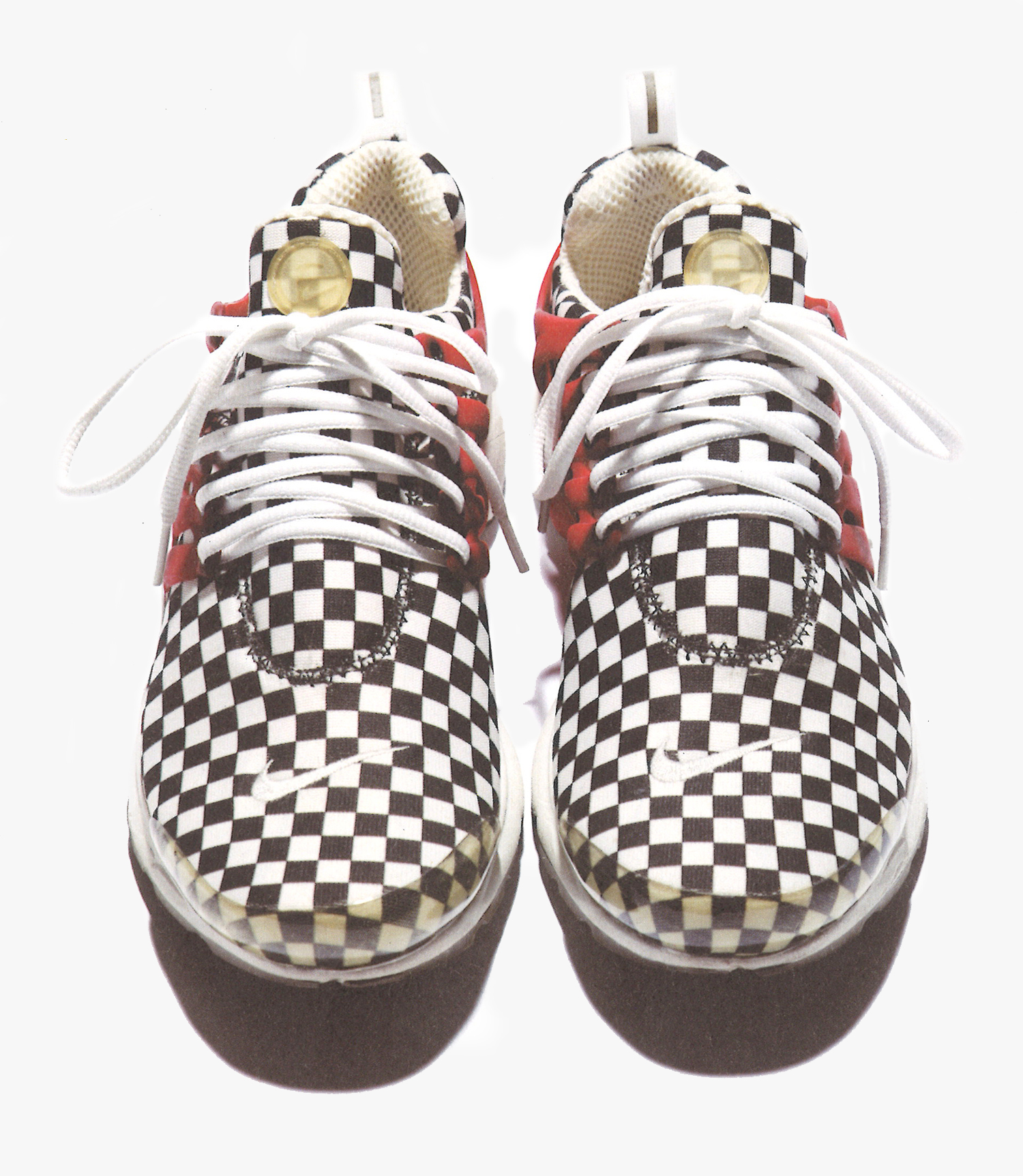 Gaining popularity across the globe in the years succeeding their release, several more creatively ingenius Presto marketing projects followed suit. With the rise of popularity of a street-based persuit called Parkour, which encouraged participants to engage with the world around them and explore their city environment, Nike enlisted the help of one of the French founders Sebastien Foucan to star in their ‘Angry Chicken’ campaign. https://www.youtube.com/watch?v=fhIMf23FUWE With technology lying at the heart of the shoe, multiple promotional DVD giveaways were produced containing collaborative content with DJ's and graffiti writers in Japan which all persued the theme of movement. The DVD's have become extremely hard to track down nowadays and sit as real valuable collectors items. 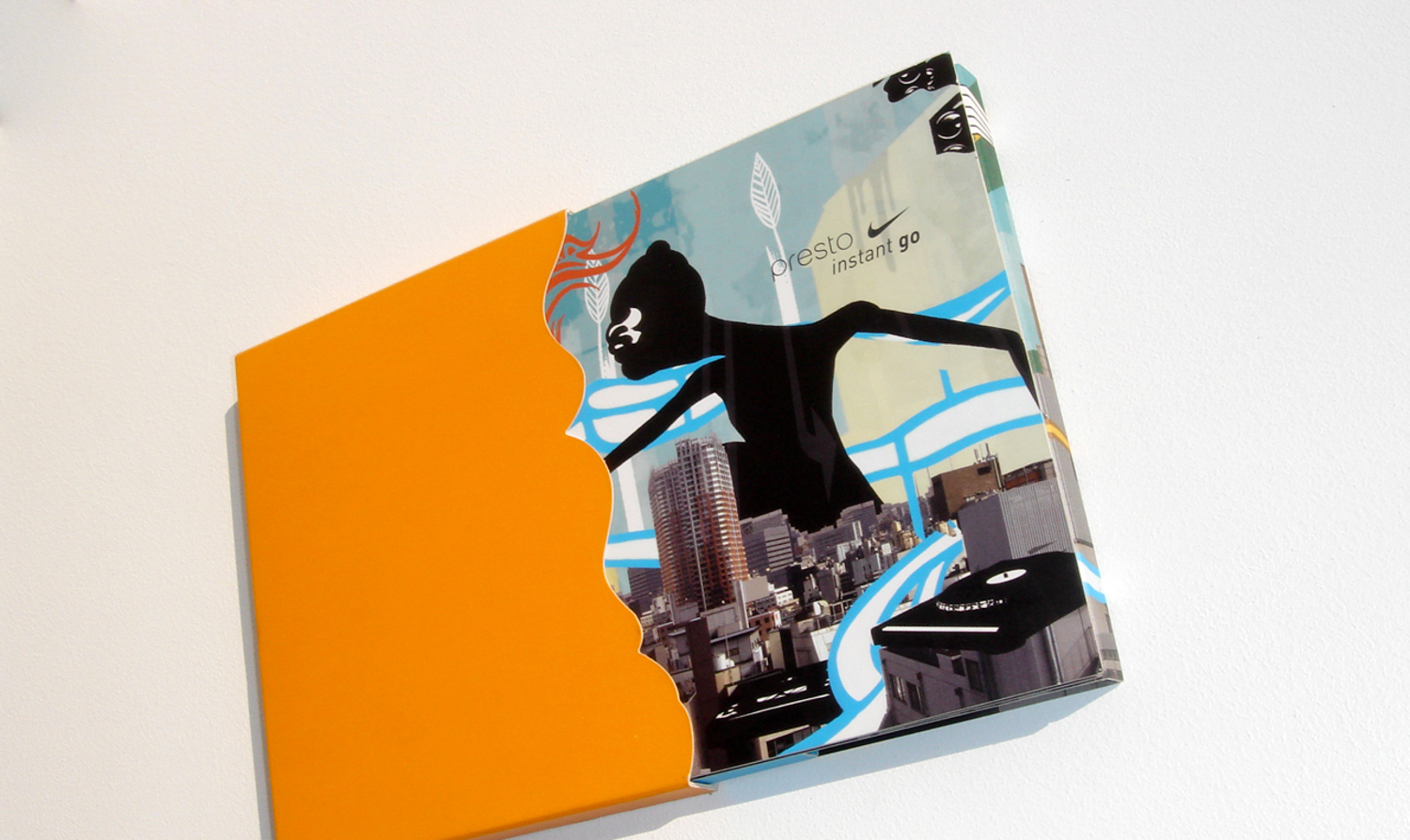 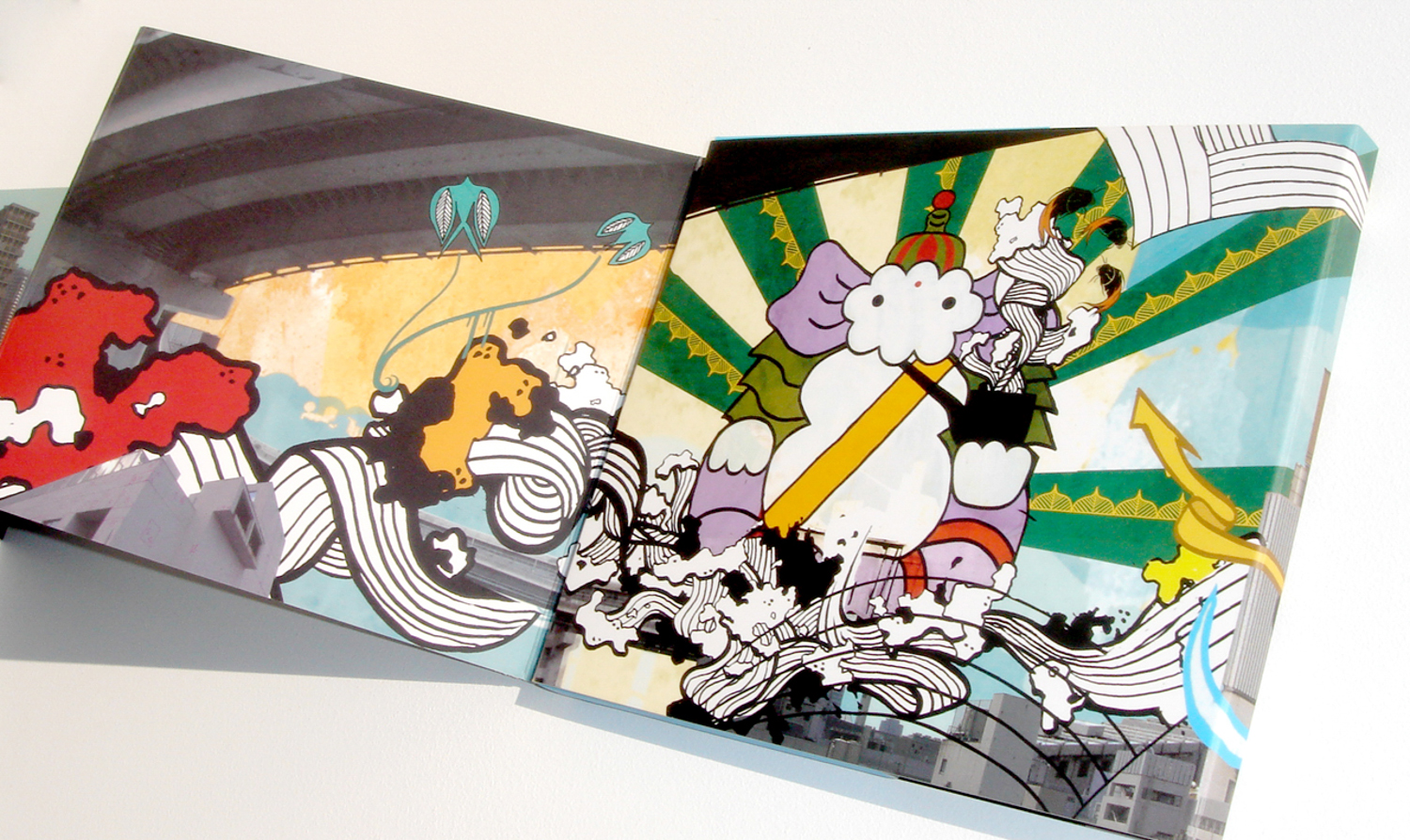 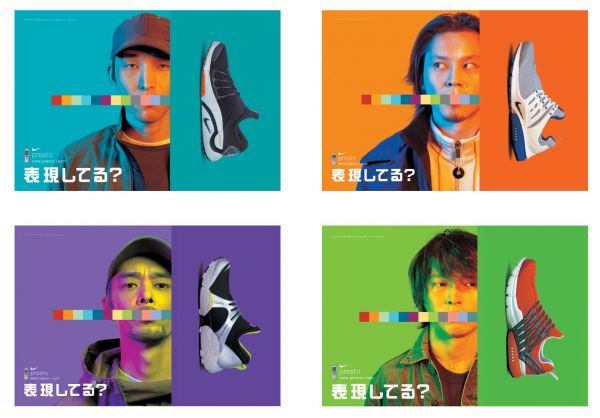 Design Progression & Limited Editions As years pass by, footwear styles progress and evolve with the help of new colourways, material applications, structural rebuilds and limited edition promotional releases. Succeeding models such as the Faze, Chanjo and Footent were a lot more abstract than their predecessor, but still find a strong place in the hearts of true aficionados. Some outstanding examples of limited edition versions included a collaboration with Hello Kitty to celebrate their 30th anniversary, a mid top ‘Roam’ version created under the HTM design umbrella, and even extremely limited F&F productions of shoes with guitarist Eric Clapton and American sitcom ‘Sex and the City’. 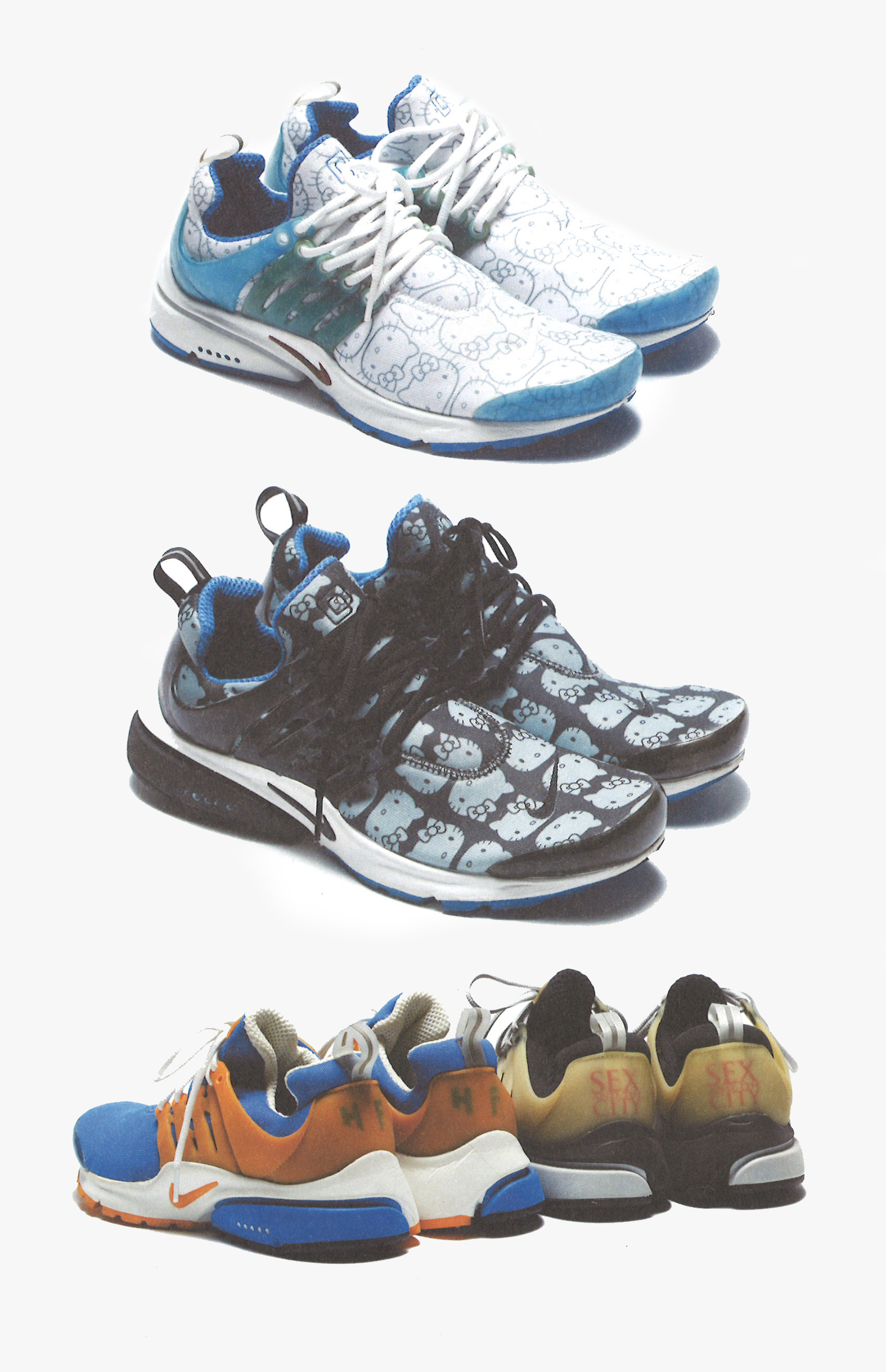 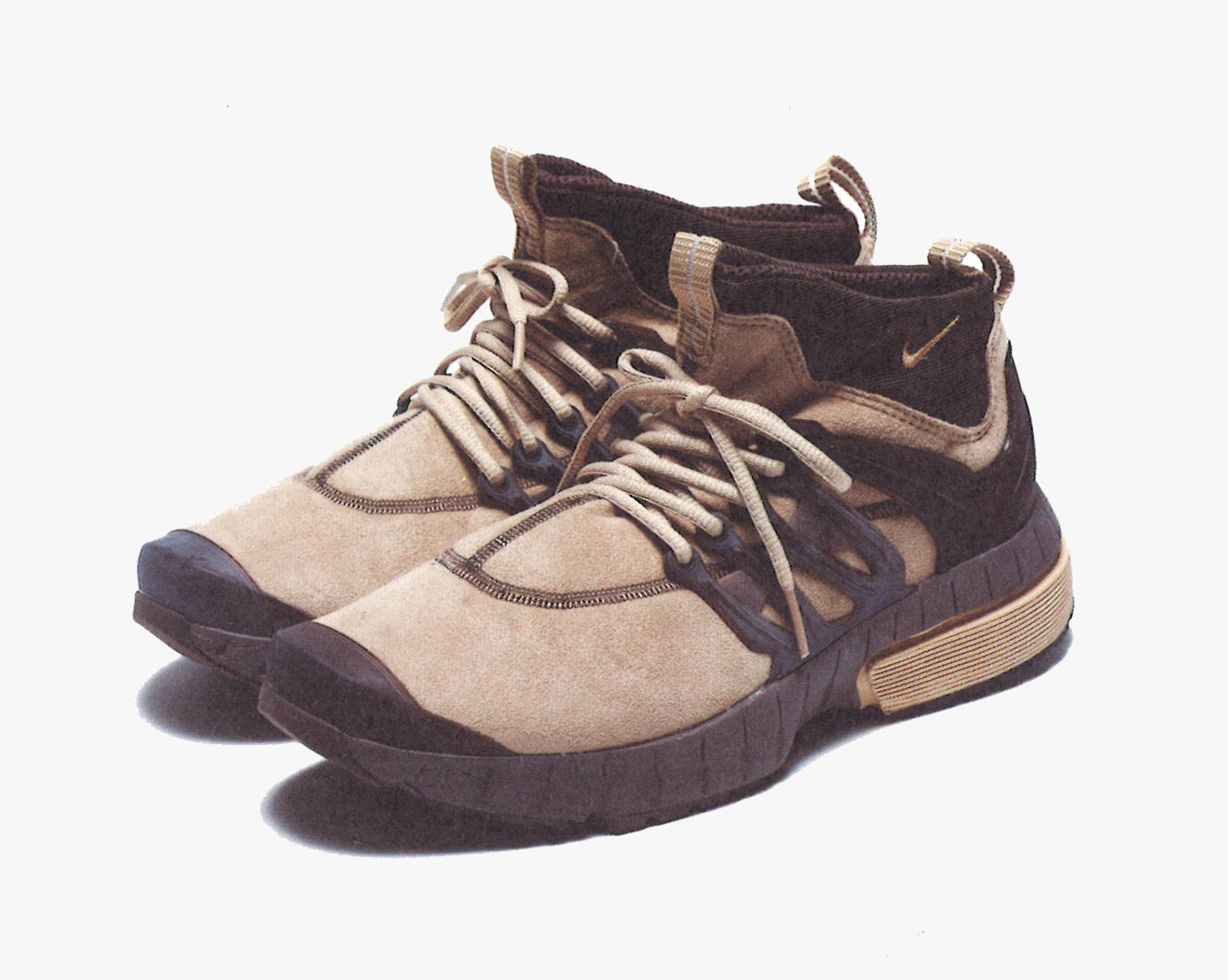 The Future In it's latest, much bolder stage of evolution, the last 16 years of innovation collide on this newest update of Nike's 'T-shirt for your feet'. This contemporary interpretation fuses the worlds of the obscure Air Presto and Nike's innovative Flyknit technology to create a mid-top version, completely kitted out in the woven fabric. Following suit with the styling we saw revealed at Nike's innovation summit earlier this year, the extension of the sock-like upper sits comfortably alongside statement pieces from their football, basketball, and most recently, skateboarding categories. 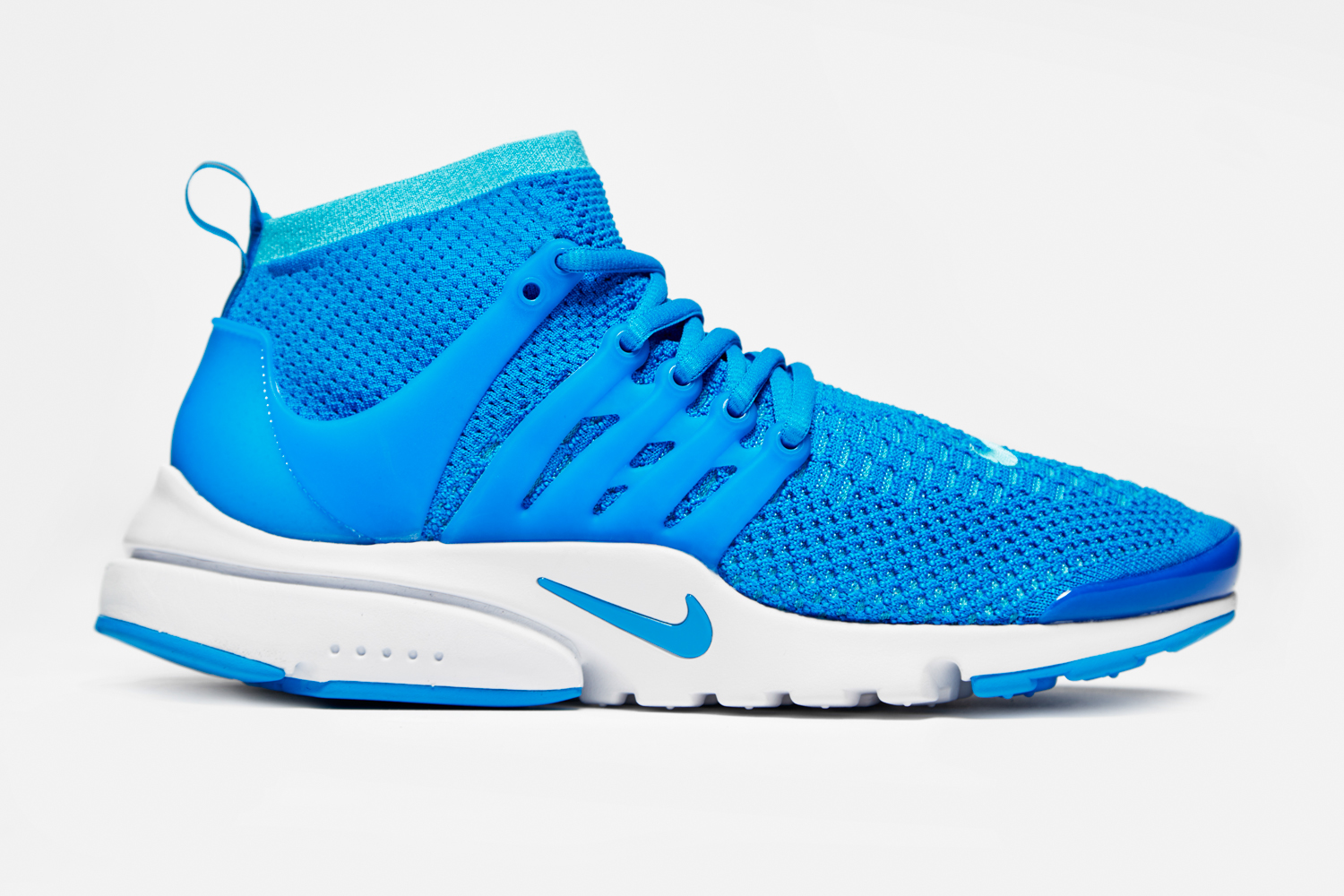 Take a look at our current selection of Nike Air Presto available here.