Off The Wall: How Vans has endured as a youth style staple for 50 years (via i-D)

Do you remember your first pair of Vans? White-and-black checked slip-ons represented everything you could ever want to be growing up all at once: a skater, a punk, an artist. It spoke to youth everywhere, from rainy seaside towns to bored suburbs to sunkissed Southern California in the late 60s, and just as it continues to speak to iconoclastic fashion designers, genre-spanning musicians, and youth around the world today. On March 16, 1966 -- exactly 50 years ago this morning -- Vans opened its very first store at 704 East Broadway in Anaheim, California. Though founder Paul Van Doren and his three business partners (his brother James Van Doren, Gordon Lee, and Serge D'Elia) had manufactured three display models, they didn't actually have any stock -- the boxes lining the original shop were empty. Their 12 opening day customers placed orders for the colours and styles they wanted and were instructed to return later in the day, as Van Doren and Lee rushed to have the shoes produced that afternoon. Before the founders opened their first stores, they had already established a reputation for quality, accessibility, and authenticity, selling shoes in Venice Beach and Santa Monica "one pair at a time, out of the trunks of their cars," says Justin Regan, Vans' Senior Global Manager, Skateboarding. 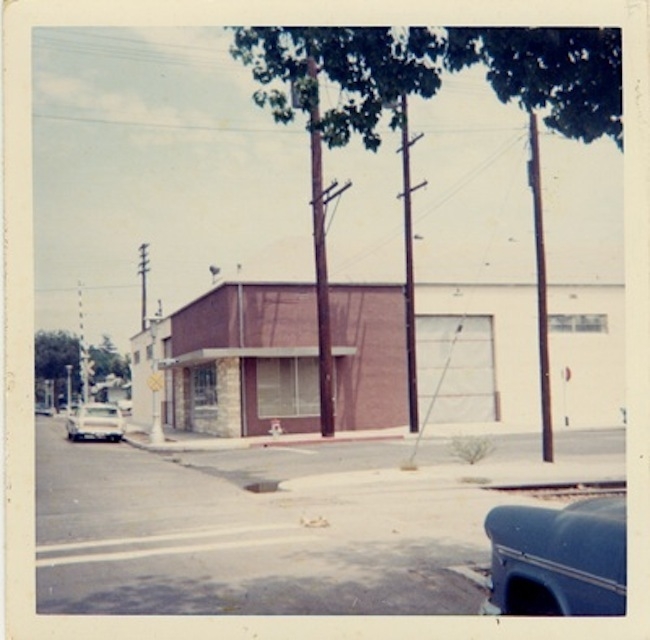 Vans founder Paul Van Doren opened the first Vans factory and store on March 16, 1966 at 704 E. Broadway in Anaheim, Calif, 1966. Image courtesy Vans. "US footwear manufacturing in the 60s revolved around New England and building a shoe factory on the West Coast, away from the industry, was something completely unheard of at the time. In that sense, Paul Van Doren and the three co-founders of Vans were definitely outsiders following the California dream," says Regan. Like any self-respecting East Coasters transplanted to Southern California, the Boston-born Van Dorens and their business partners were drawn to beach culture and an outdoor lifestyle. Just as surfing paved the way for future skaters, the sport and its encompassing culture planted the seed for Vans. "After meeting legendary surfer Duke Kahanamoku and his surf team, my father made customised shoes out of their Hawaiian floral shirts," explains Steve Van Doren, the son of founder Paul Van Doren. (Steve now serves as Vans' Vice President of Events and Promotions and has been a Vans employee since the age of ten.) "From that moment, he knew he was on to something. Over the next year, my father and his three partners worked to build an entire factory to make vulcanised shoes." That innovation would prove critically important to skateboarding's development. "Back then, skate parks didn't exist, so kids were taking to the streets and abandoned pools to ride and carve the concrete," says Steve. Much like the development of polyurethane wheels allowed early skaters to achieve smoother, faster, and more controlled rides, Vans' vulcanised natural gum waffle soles "gave them the extra grip that they needed." When those sidewalk surfers and proto skaters started coming back, "I think an unlikely kinship among these outsiders was born. It was a two-way street where Vans began listening to these guys and making products specifically for them," says Regan. 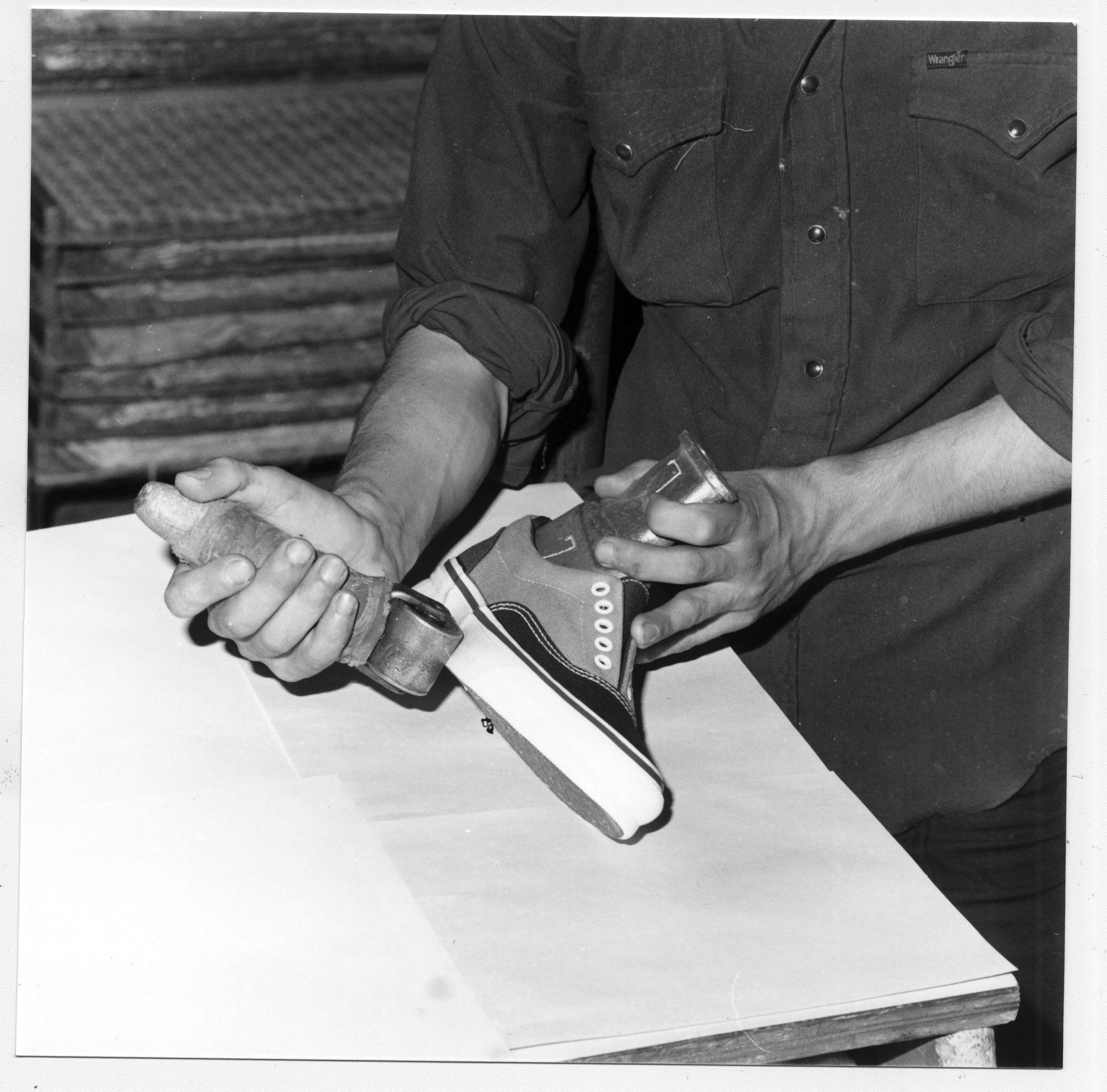 Smoothing out the sidewall of a Vans shoe, 1966. Image courtesy Vans. At the time, Steve says, "Vans was the first brand to offer customised footwear. You could pick out your own fabric and come and pick up your shoes later that day." One of his favourite stories is when legendary Z-Boy Tony Alva had worn down his left shoe: "Back then, Vans sold half-pairs of shoes, so while he may have had navy on his right foot, he could pick up a brand new red pair to wear on the other side for half the price." And yet, Regan insists that, "Vans is not a skate brand and it never has been." Rather, "Vans was adopted by skaters. And likewise, Vans respected these guys -- their athleticism and their culture -- at a time when, at best, people considered them losers and, at worst, nobody could give a fuck either way. That unique culture born back then is still with us today." Today, Vans is an alternative empire. Its action sports offerings extend far beyond both skateboarding and sneakers; the company has innovated apparel, accessories, footwear, and hardware for surfing, snowboarding, and the street. And also, critically, for the stage. 20 years ago, in 1996, Vans became the title sponsor of the Warped Tour, the parking lot moshpit founded by Kevin Lyman that's since become the longest running music festival in the United States. "Kevin created it as a place for all of the punks, misfits, and rock bands to come together and play music. In previous years, Vans brought out mini ramps for skate demos in between music sets," explains Van Doren. Regan sees that convergence as more a matter of ethos: "Listening to skaters gave us a cut-down version of the Caballero high-top in 1992 called the Half Cab, the longest-running signature skateboarding shoe of all time. Meanwhile, listening to the punks gave us the Warped Tour," he explains. "By respecting our consumer enough to listen to them, we've evolved with them and gone with them wherever we've been invited." 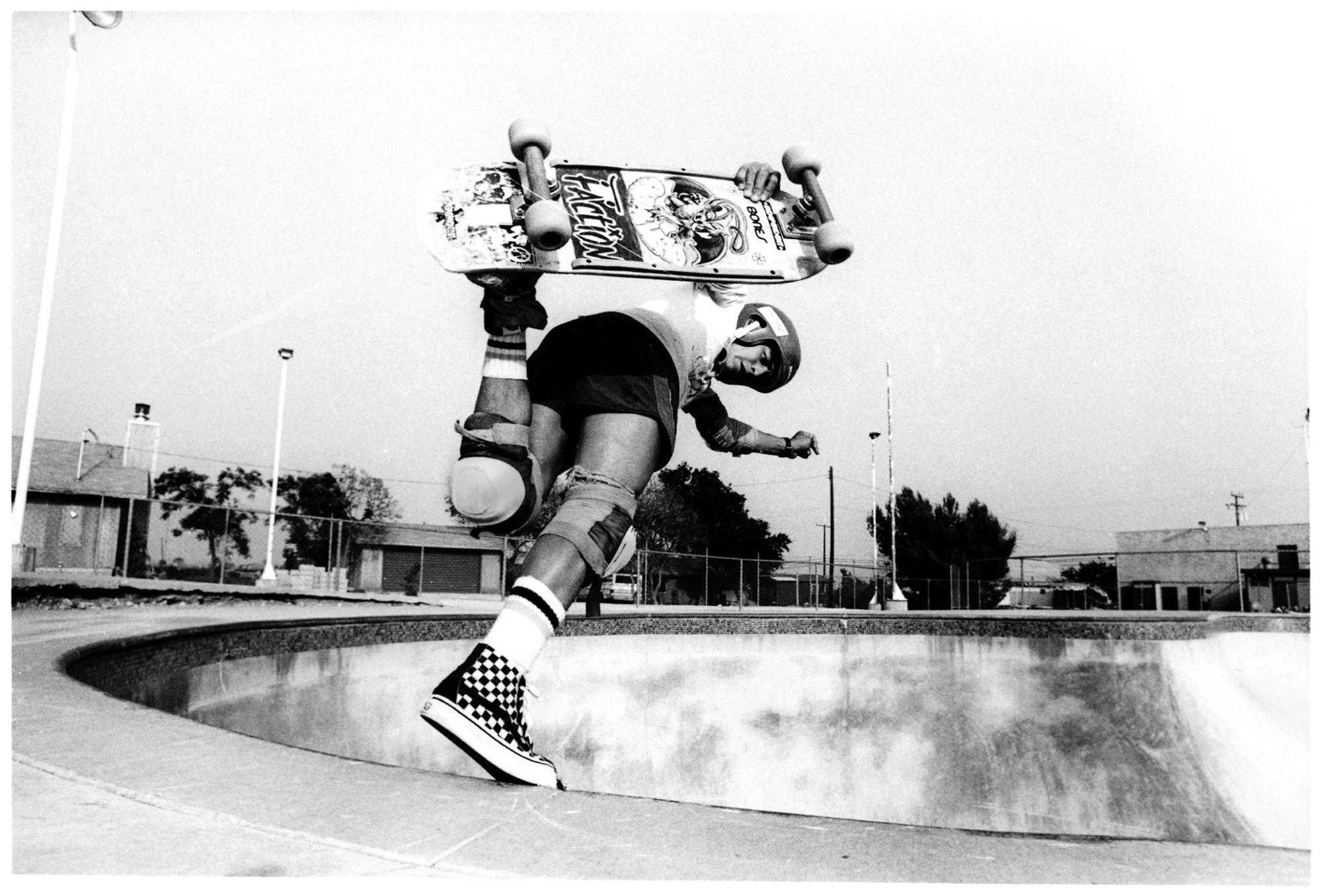 Steve Caballero, Backside Boneless at the combi-pool at Upland Skatepark in Southern California, 1985. Image courtesy Vans.   In recent years, more and more invitations have come from the fashion industry. Vans sneakers have not only appeared on runways -- at British menswear maverick Shaun Samson's shows, for example -- they've become a collaborative canvas for some of the world's most exciting designers. "In the last ten years, Vans has had the unique opportunity to work with some of the most influential designers in the world in a very organic way," explains Stephen Mills, Vans' Vice President of Lifestyle Footwear. "Just as we were adopted by skateboarders from the Dogtown crew, the same has happened in fashion." Mills sites collaborations with Marc Jacobs and Luella Bartley as well as with Carol Lim and Humberto Leon, who have partnered with Vans for both Opening Ceremony and Kenzo. Some of the most feted fashion Vans of late are the work of Russian wunderkind Gosha Rubchinskiy, who approaches the brand through the lens of post-Soviet cool enshrined in his menswear collections. The shoes in Rubchinskiy's most recent collection, which sold out instantly, are emblazoned with his name in Cyrillic — a graphic hallmark now sported by cool kids everywhere — while earlier iterations featured the "sunrise print" by cult artist Timur Novikov. The sneakers represent the powerful convergence of two seemingly disparate aesthetics and worlds: the brutal cool of Soviet skate style and the sunny fluidity of Southern California. 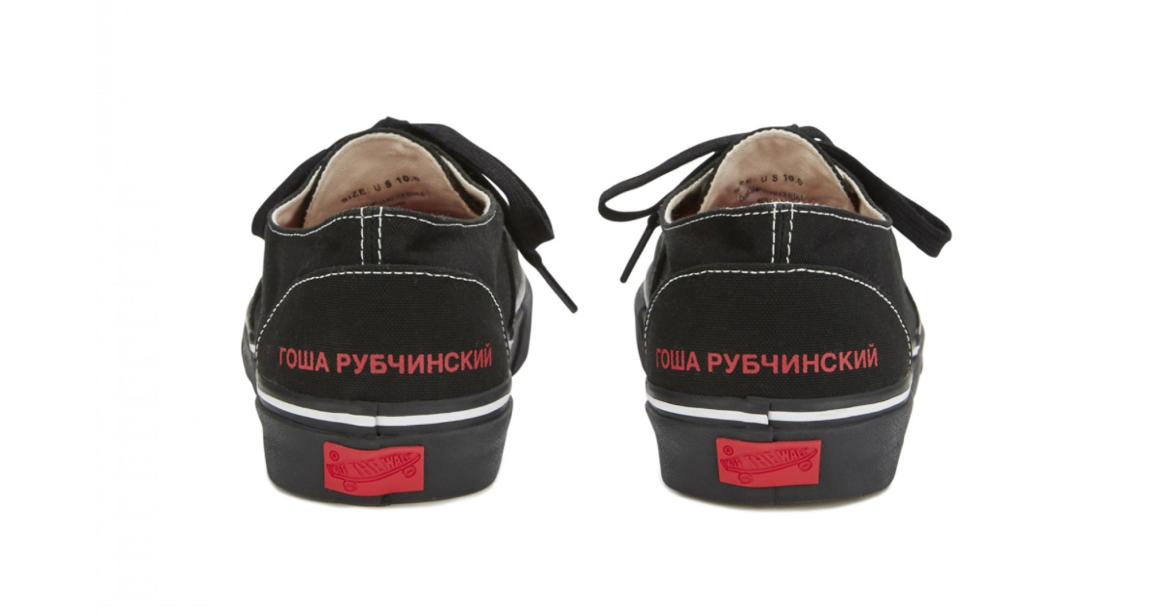 As much as Rubchinskiy's brand is rooted in the styles and ethos of Russian punk bands, nonconformist artists, and skate culture, so too is Vans at the centre of this cross-cultural convergence. Supreme's decade-spanning collaboration with Vans demonstrates the brand's engagement in every area of creativity. Supreme has used Vans not only as a canvas for its skate-inspired designs, but also as a way to recontextualise artworks (by the likes of Andy Warhol and Ari Marcopoulos), music (Bad Brains and Public Enemy), film (Bruce Lee), iconic American brands (White Castle and Playboy), and the work of other fashion designers (see its ongoing partnership with Comme des Garcons PLAY). "I think the attraction to work with Vans is that we have never tried to change or apologize about who we are," says Mills of these widely varied fashion collaborations. "That attitude of being an individual and creatively expressing yourself through your craft has transcended skateboarding." It's a sentiment echoed by model Natalie Westling, who has feet in both worlds herself. Though the two-time i-D cover star has walked runways for Prada and starred in Marc Jacobs campaigns since she was 17, she's been skating for far longer -- since she was just three. The sport and its culture form a core aspect of Westling's identity (she has "Skate" and the Vans logo tattooed on each of her arms) and her unapologetic realness has made her rise in fashion all the more refreshing. Three days after Rubchinskiy's latest Vans hit the internet, Westling was announced as Vans' newest Brand Ambassador, fronting its 50th anniversary Sk8 Hi campaign -- a marriage made in skate and high fashion heaven. 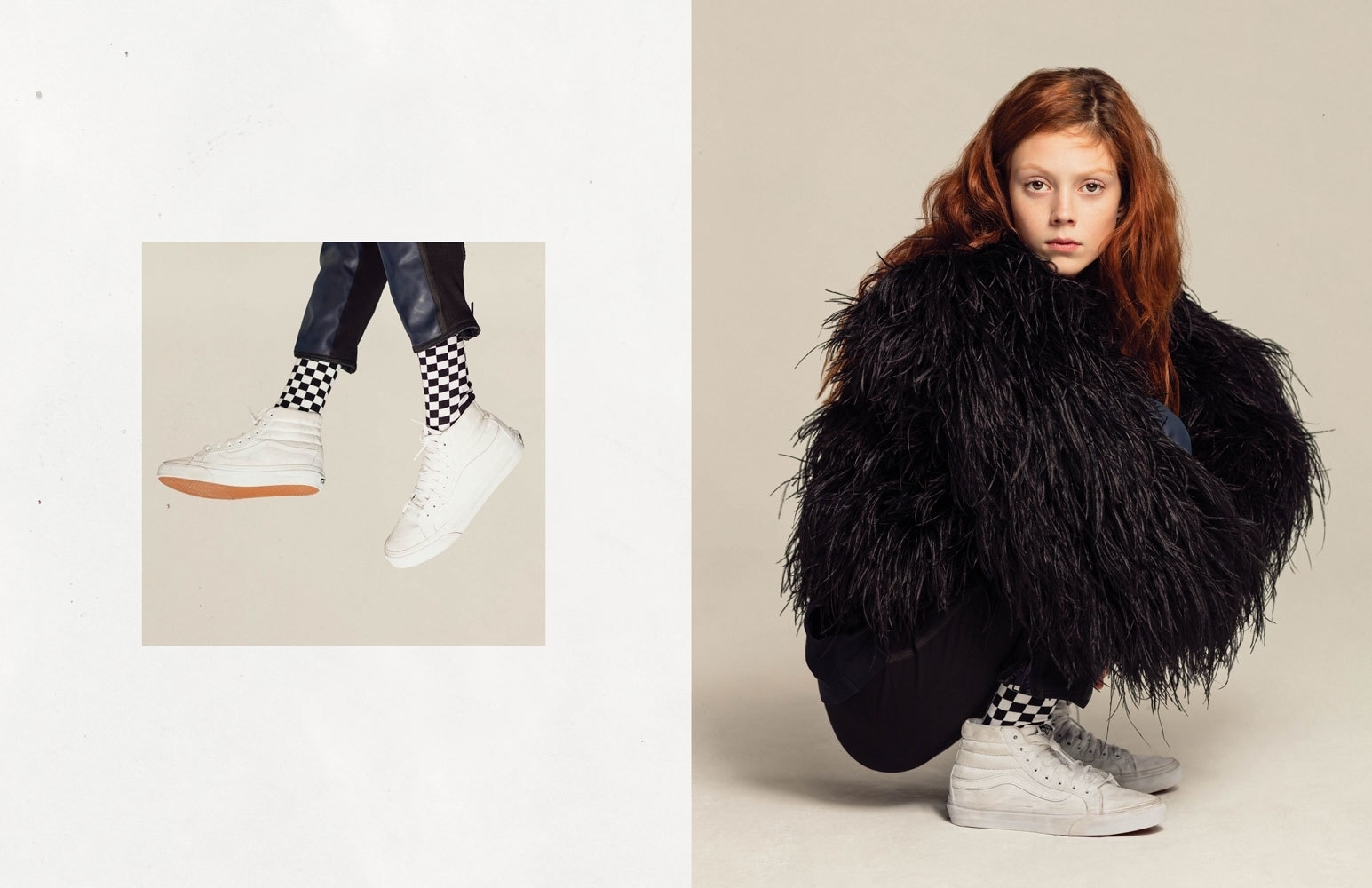 "Almost right after I was scouted by [modeling agency] The Society, they asked me if I would like to do something with a skate brand and, of course, I said yes," says Westling. Because she was new and just starting out in the industry, the agency didn't put a timeline on the project. But, "when I came in one day and surprised them with the Vans tattoo I had done on my arm, it kind of sealed the deal that Vans was going to be the brand," she laughs. She joined the campaign alongside boundary-smashing musicians Syd Tha Kyd and Henry Rollins, skaters Steve Caballero and Lizzie Armanto, and surfer Wade Goodall. But it's working with the Vans team that "has been one of the best experiences since I started modeling, because it's like working with an extended family or a bunch of friends," says Westling. "They're fire." Today, Vans is celebrating its landmark anniversary through a global event series at House of Vans outposts in Brooklyn, Austin, Cape Town, Hong Kong, and more. These far flung installations will bridge the worlds that have shaped the brand for the past five decades. "At Vans, we believe that creative expression and being an individual is a part of what makes the world a better more beautiful place and we want to show our fans across the world that it's not about limitations, but about possibilities," says Mills. "Follow your heart, be yourself, and good things will happen." Text by Emily Manning The Vans Pro Classics 50th Anniversary pack is available now from size? Carnaby Street, Amsterdam and Milan.