The Story Behind the Air Force 1 Ultra Flyknit 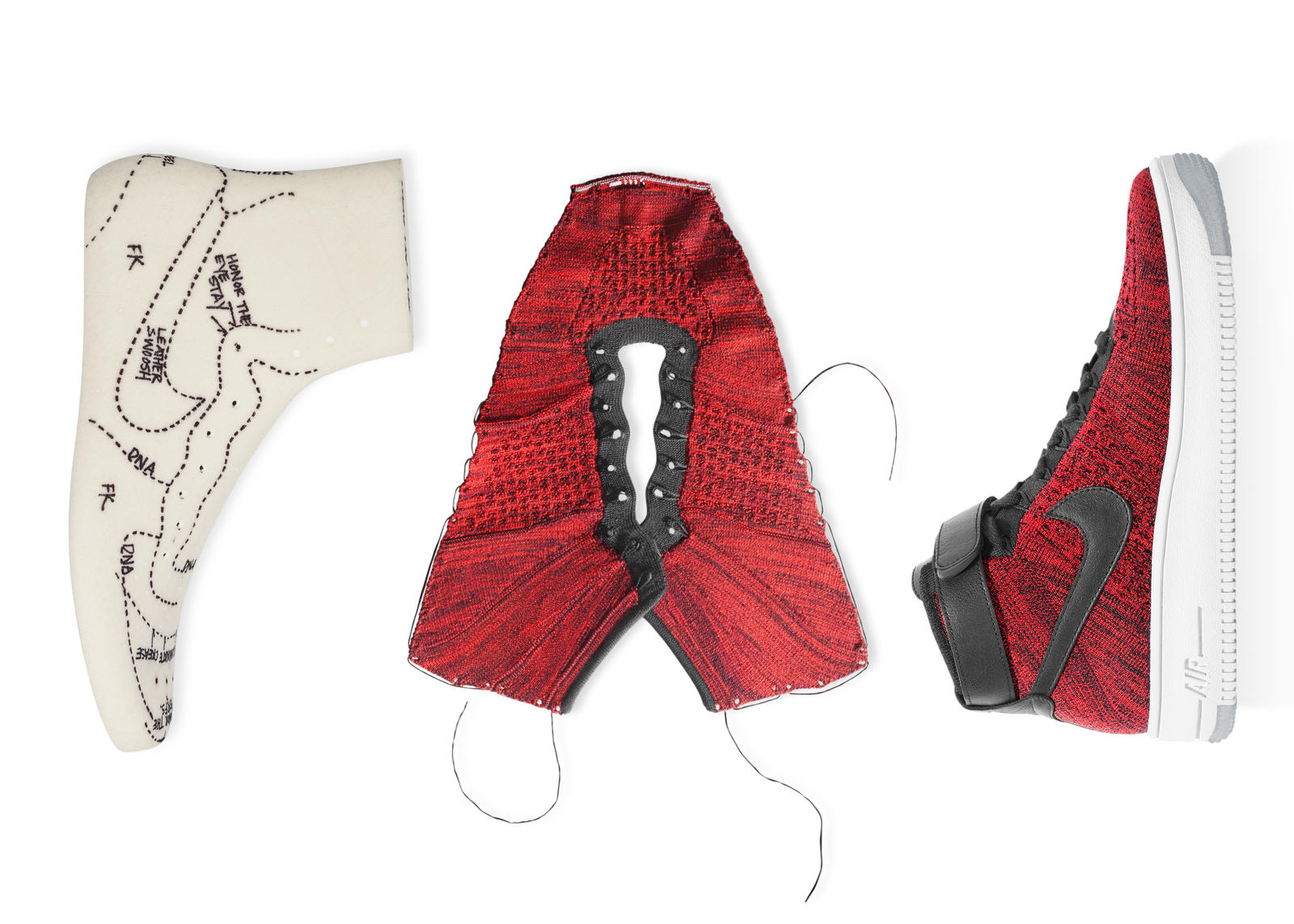 Thirty-four years after its launch and 2,000 iterations later, the Air Force 1 — an iconic shoe with roots in basketball and legend status in street culture — remains one of Nike’s most recognisable silhouettes. As a foundational design, it also presents an opportunity to reimagine new visions of classics. To usher the icon into the future, while taking its legacy, use and symbolism into consideration, Nike designers tasked themselves with marrying the original silhouette and Nike’s breathable, lightweight Flyknit material. But the application process wasn’t wholly intuitive. 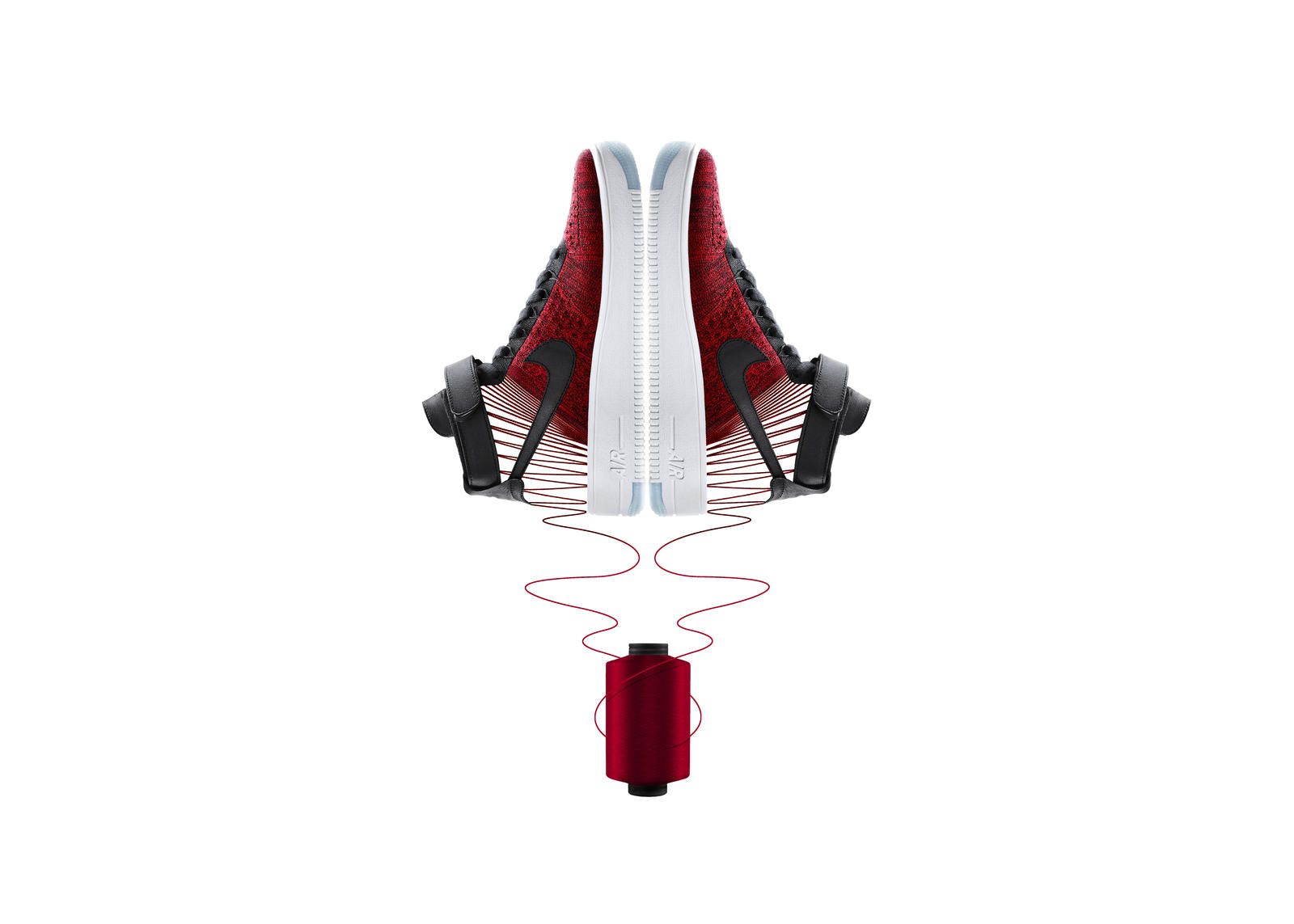 It started with Nike Sportswear designers taking steamy 12-hour inspiration strolls around Paris in the summer, which led to the conviction that they could make the shoe lighter and more flexible while enhancing fit and reducing creasing on the toe vamp. The designers knew that they needed a solution that preserved the essence of the original Air Force 1. Taking a hands-on approach, Nike Footwear Design Director Jonathan Johnsongriffin bonded a dark grey Flyknit upper to a 3D-printed prototype of an Air Force 1 sole, then used a black marker to color in the Swoosh and eye soles.
Johnsongriffin’s frankensteined model instantly clicked, as it maintained the integrity of the traditional shoe, with the added comfort of the Nike Roshe One. The design team next made a sample using multicolor Flyknit material. The development of the lightest Air Force 1 ever was officially underway, shepherded by a collaborative team of footwear engineers, developers, last engineers, Flyknit programmers, 3D designers and product line managers. 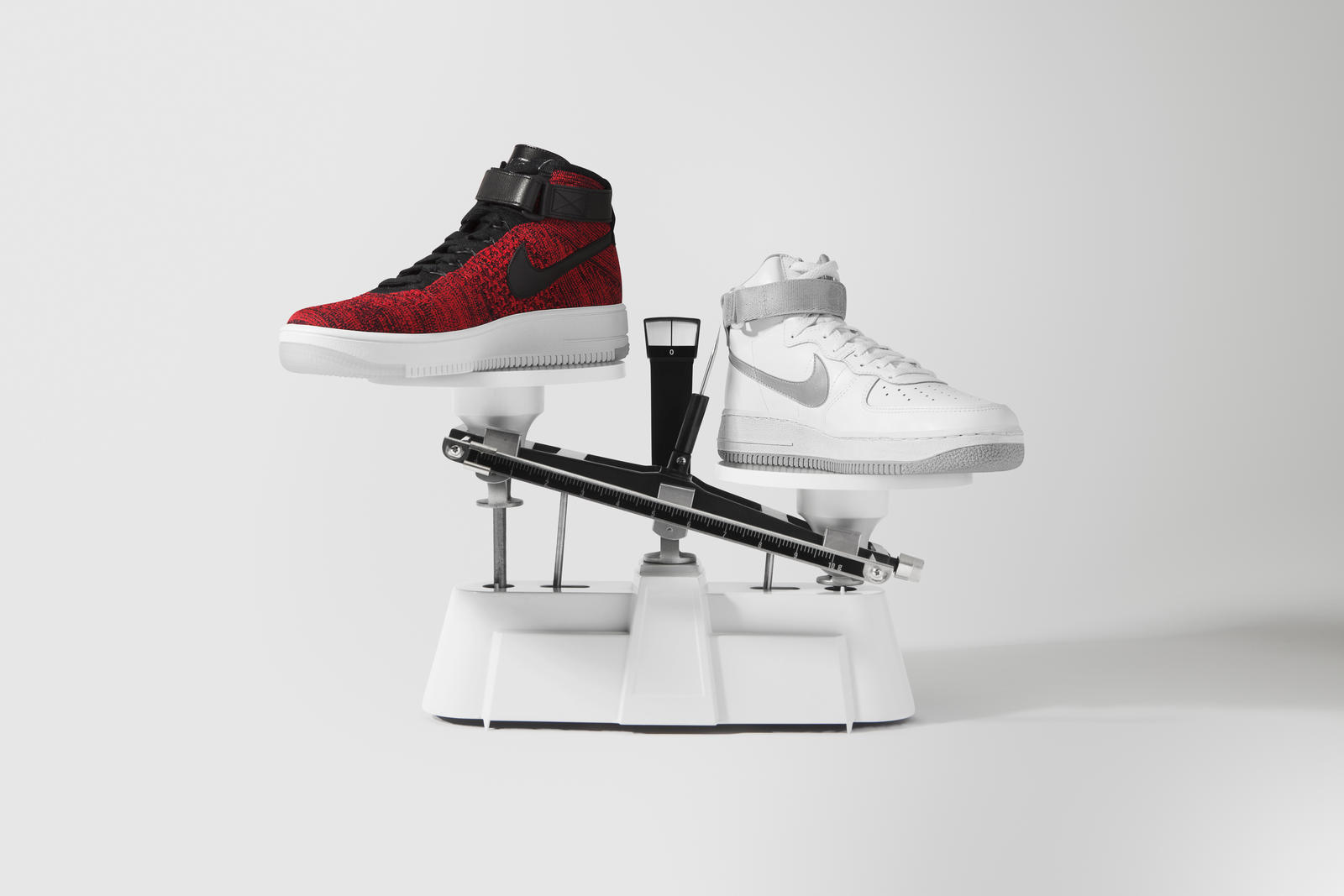 From the beginning, the team insisted on keeping the concentric circles of the archetype sole’s shoe pivots, in addition to its AIR lettering and tooling. They decided to deboss instead of emboss the lettering and use injected unit rubber tooling instead of polyurethane tooling to make the shoe even lighter. They also insisted on keeping the 52 stars on the rubber toe piece.
When applying Flyknit, the teams collaborated to engineer the exact structures and textures necessary to maintain the shape and paneling of the original Air Force 1. They focused on keeping the original stance of the tip, saddle, foxing and vamp, as well as the perforations in the vamp, by programming thicker, firmer yarn on the raised tip and undulating eye stay. Flyknit technology enabled the design team to precisely micro-engineer every stitch to create the featherweight upper for maximum comfort and minimal weight, while it also reduced manufacturing waste and the amount of material used. The shoe became not only the lightest Air Force 1 ever made, approximately half the weight of the original, but also the first Flyknit shoe to include a leather Swoosh logo. The Air Force 1 Flyknit is available online here and in selected size? stores, priced at £150. In the meantime, you can take a look at our brief history of Flyknit technology here. 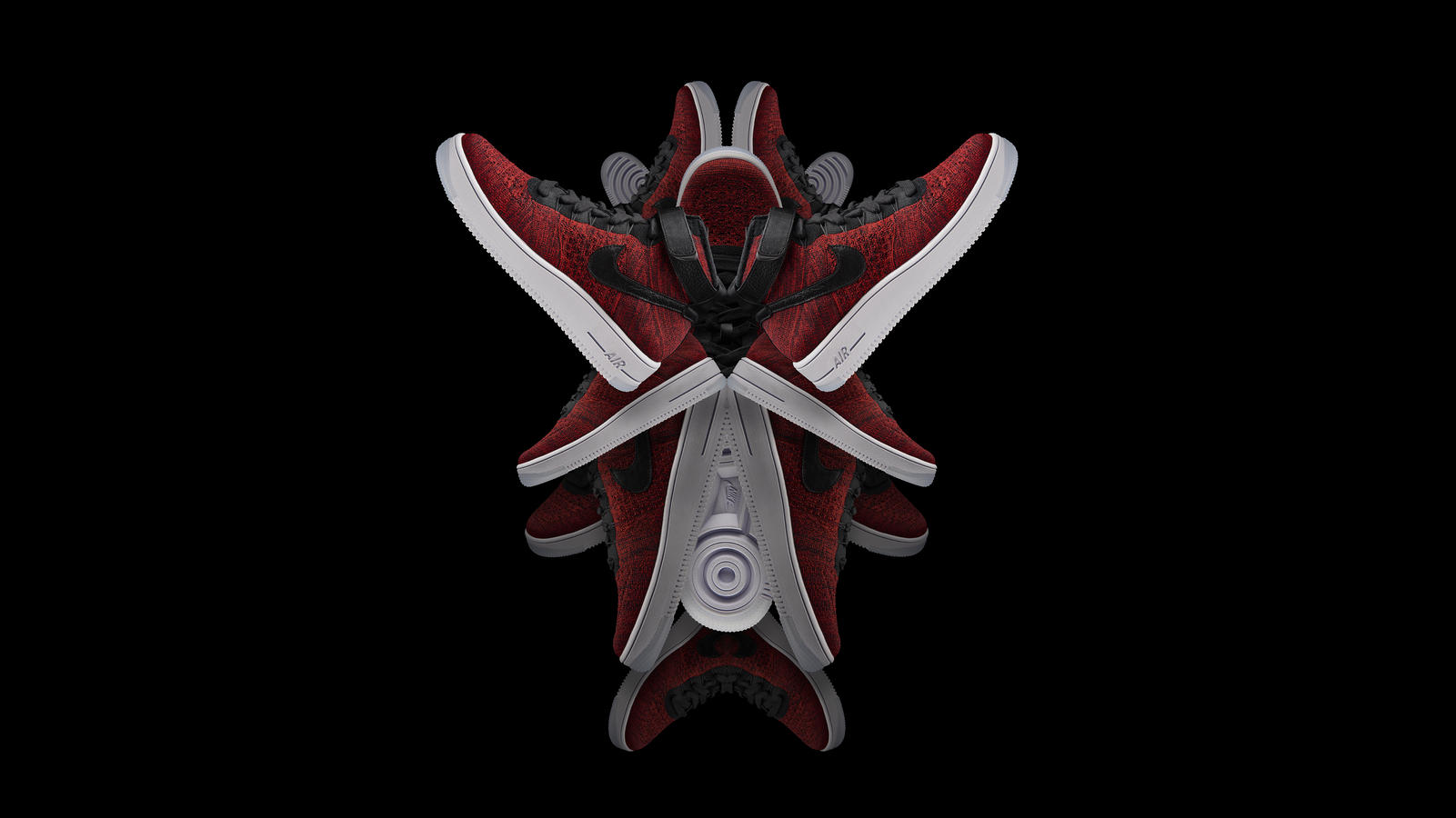 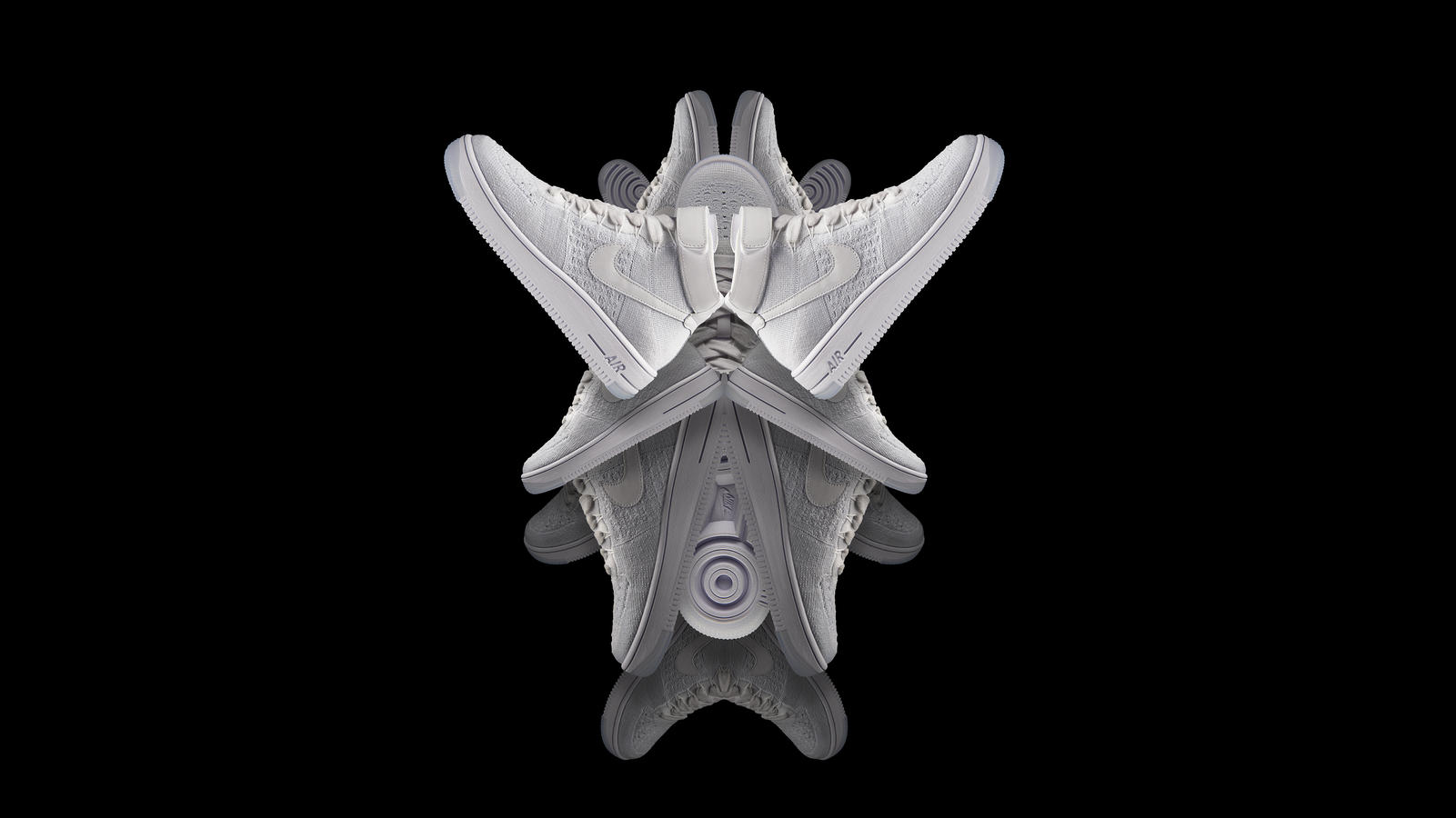