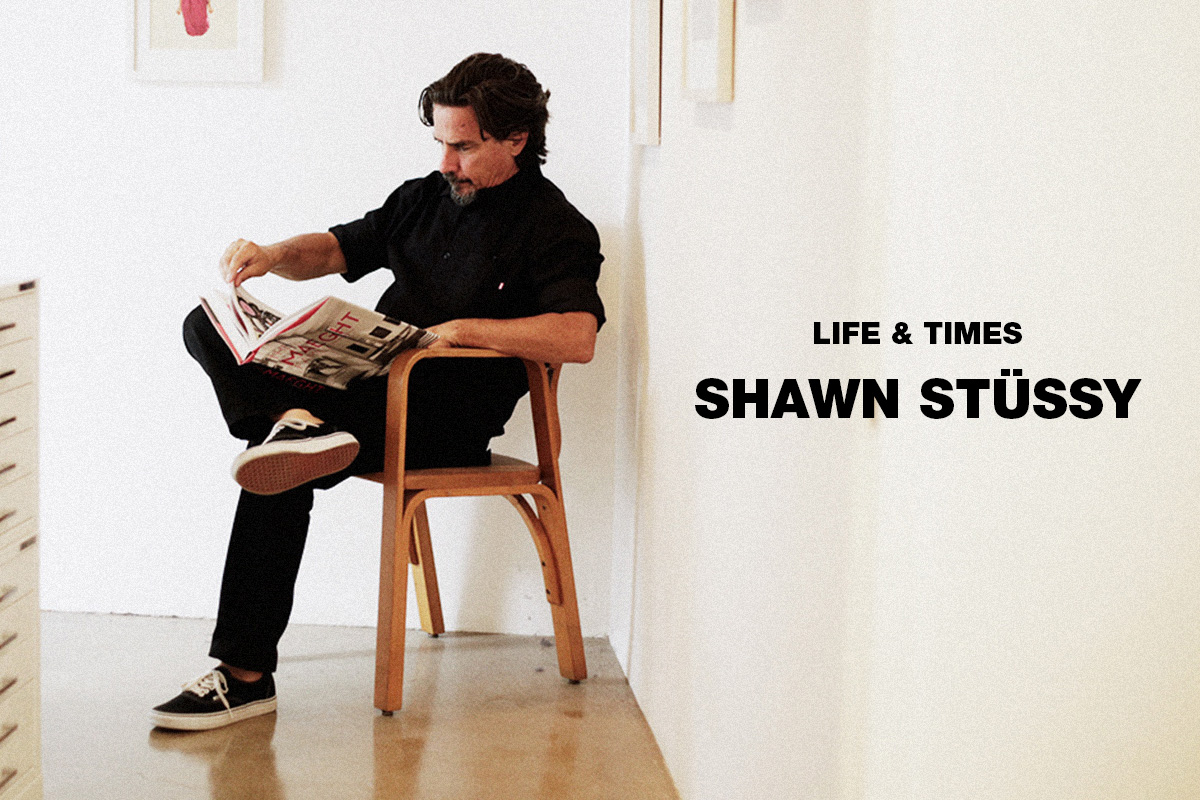 Our friends over at Highsnobiety have just started a new series chronicling the lives and careers of prominent figures in the street fashion industry, kicking off with Shawn Stussy, the man behind the brand. You can see what they had to say below. How do you write an introduction for a man like Shawn Stussy? There’s no easy answer to that. How do you succinctly introduce a man who has effectively spawned an entire subculture and, in turn, changed the face of youth fashion irrevocably? In short, you can’t. What you should know, however, is that without Shawn Stussy, this website, this culture and probably the clothes you’re wearing right now would likely not exist. To this very day, there are few brands more iconic within streetwear than Stussy. And there are none that have exhibited the same staying power as the Californian-born label. Few of its peers are seen as such an enduring signifier of underground culture so many decades on. Almost chameleon-like in its ability to blend into cultures right across the globe, Stussy has meant many different things to many different people throughout its three-and-a-half decade lifespan, with the only common thread being a uniquely independent spirit. But while you undoubtedly know the brand, how much do you actually know of the man that founded it? As his eponymous brainchild marked its 35th anniversary last year, Shawn’s own absence from proceedings was notable. In fact, the man who first scrawled his name on a surfboard back in February 1980 (or late 1979, depending on which account you read), unwittingly birthing one of the most unique logos fashion has ever seen, has long since ceased any direct involvement with brand he co-founded. So what exactly is his personal legacy? 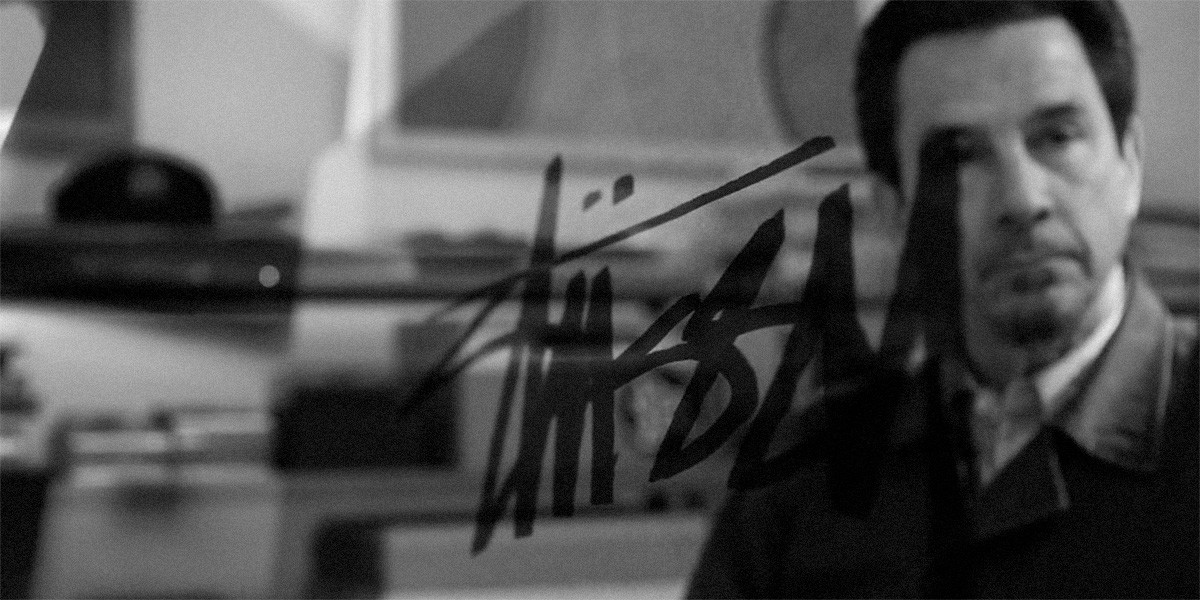 Born in 1954, Shawn grew up immersed in West Coast surf-culture — something that continues to inform his work to this day, although perhaps more in spirit than on an aesthetic level. He picked up his first surfboard at the tender age of 13, and by his later teenage years had garnered a reputation as a skilful shaper of boards. This would serve as the foundation of the Stussy brand, although it would veer wildly away from that in the years that followed. In fact, Stussy’s shift into the clothing world would happen almost by accident. “The way it happened was trade shows in 1981, ’82. I’m making surfboards in 1980, I just scribbled Stussy on them,” Stussy told Empire Ave in a 2013 interview. “I didn’t know, I hadn’t been to trade shows. So, I go ‘let’s print some black Hanes T-shirts’ and I printed white Stussy on them, like Alva, you know? I stood there for three days and I sold about 24 boards. But every single person came by saying: ‘Yeah I’ll take a board or I’ll take two boards, but how much are those T-shirts?’ And I’m like, ‘I don’t know, they’re not for sale.’ ‘But no, I want to buy 24 of those.’ So I was like, ‘Okay, they’re eight bucks.’ There wasn’t like a price sheet or anything. At the end of the three days I had sold a thousand; I was like ‘oh, are you kidding me?’” 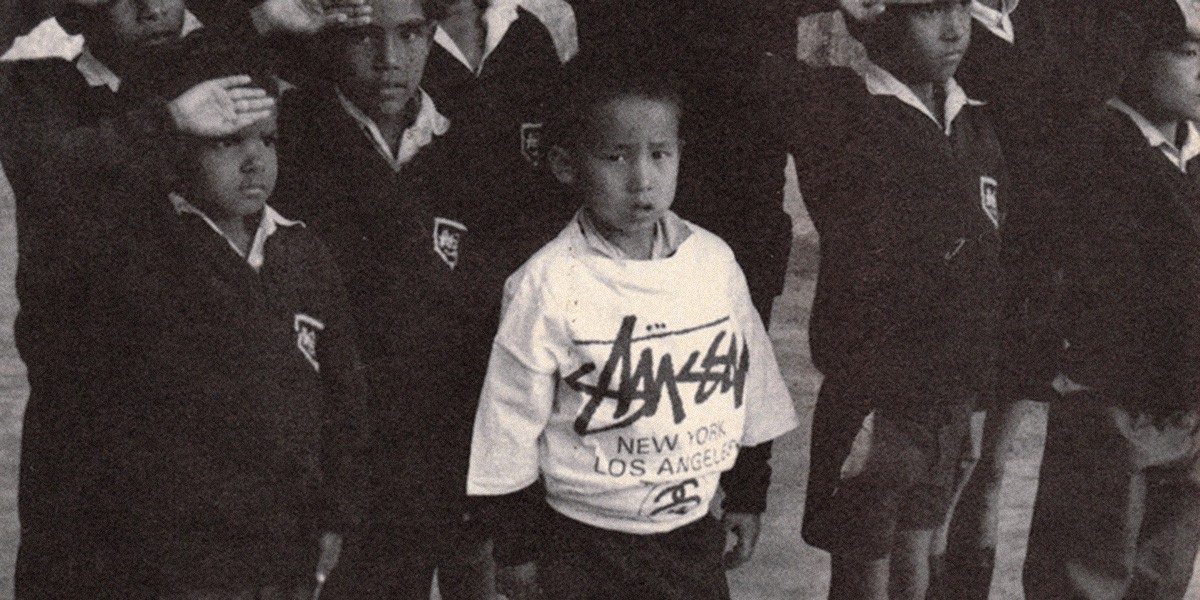 Even with his modest trade show success, his board shaping abilities were what kept Stussy afloat for the brand’s first decade. His business partner, Frank Sinatra (no, not that one, and no relation either) remembers those early years and the constant grind that laid the foundations for Stussy’s global success that would follow. “There was no venture capital, there was no outside funding. It was my money — and I didn’t have a lot of it,” said the former Certified Public Accountant in an interview with Complex. “We all wanted it to be our thing, we didn’t want our brand strategy dictated by investors’ demands, so we just did what we had to do — including working two jobs, until it got to the point where it could support us.” Sinatra went into business with Stussy in ’84, but it wasn’t until the twilight of that decade that the brand began to see a return on his investment. By then, Stussy’s interlocking ‘S’s (in homage to the Chanel logo) and sports caps emblazoned with a bold ‘S’ (the first fashion brand to do so) had caught on in New York, pushing the label’s revenue to $17 million by the end of the decade. 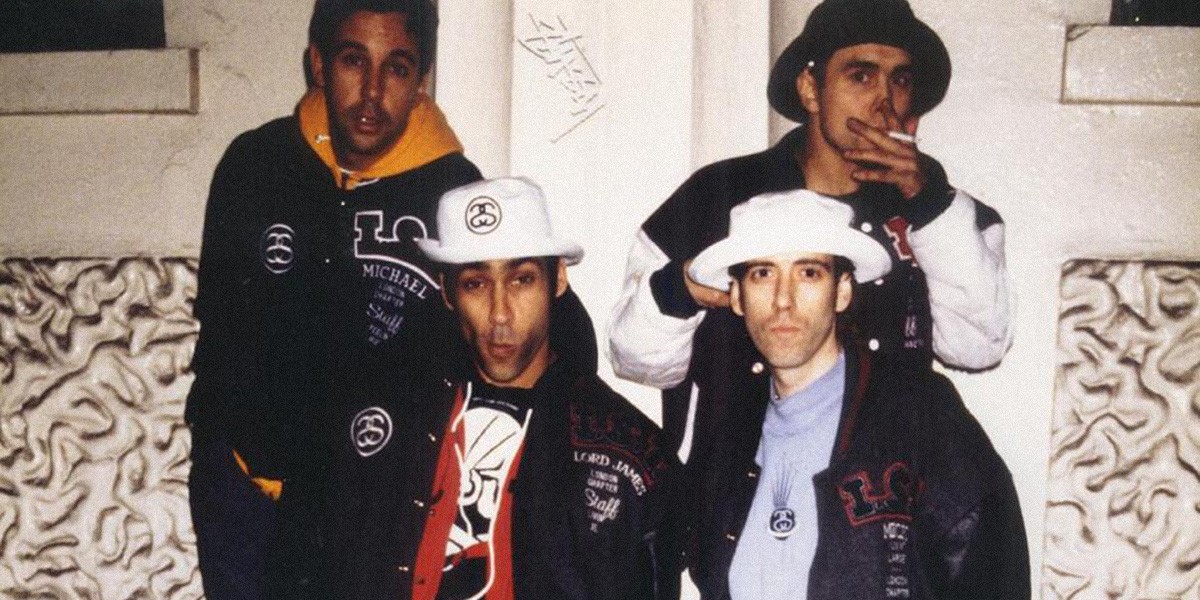 This hip-hop-esque sampling from other styles and genres would become Stussy’s stylistic signature over time. It was just effortlessly cool, and it made sense to those who understood the vast array of reference points that went into the brand’s designs. And they were indeed vast: punk, The Sex Pistols, Malcolm McLaren (for whom Shawn provided the artwork for his 1990 album ‘Round the Outside!’), Keith Haring, DJing, skateboarding, Tokyo, London, New York, hip-hop — and that’s just a few of them. “Stussy was one of, if not the first, brand to do what they do,” says Steven Vogel, author of the seminal book Streetwear, which was the first real attempt at explaining this clothing subculture in print. “They balance tapping into the past, remaining current and tapping into the vanguard zeitgeist better than most. At their core, they aren’t pretentious, they make on-point clothes without really succumbing to trends. Additionally, hell, it’s Stussy, they have become to me and certain people of my generation a staple like Levi’s — sure, not as old, but just as valid in my opinion.” 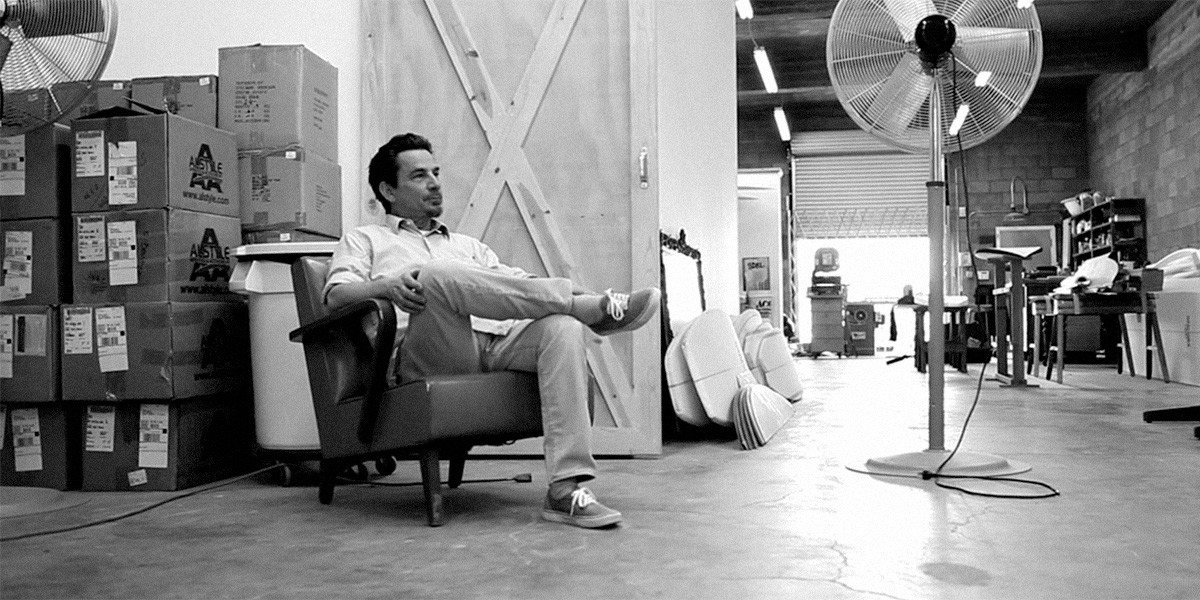 The success, paradoxically, also sparked the beginning of the end for Shawn at his eponymous label. He would leave the brand in 1996, citing that he wished to spend more time with his family in Hawaii. More concrete reasons for his departure have never really been given, but most speculation seems to centre on him becoming jaded with the rigors of operating a multi-million dollar company and seeking something more from life. “It had turned into something that I was never looking for,” he would tellAcclaim Mag some years later. “With that came a lot of responsibility and twenty-hour work days and all the money in the world. But if you don’t have time to go spend it, what good does it do?” There were also creative differences between himself and his Stussy Tribe — a conglomerate of global confidants, tastemakers and creatives who had helped cultivate the brand’s cool-credentials in their respective cities. In that same interview, Stussy cited the likes of A.P.C. and COMMES des GARÇONS as brands he saw as being the future, while others, he claims, didn’t want the brand to evolve stylistically away from its iconic roots. Perhaps today Shawn will look on the label’s recent collaboration with CDG’s Dover Street Market with a wry smile. 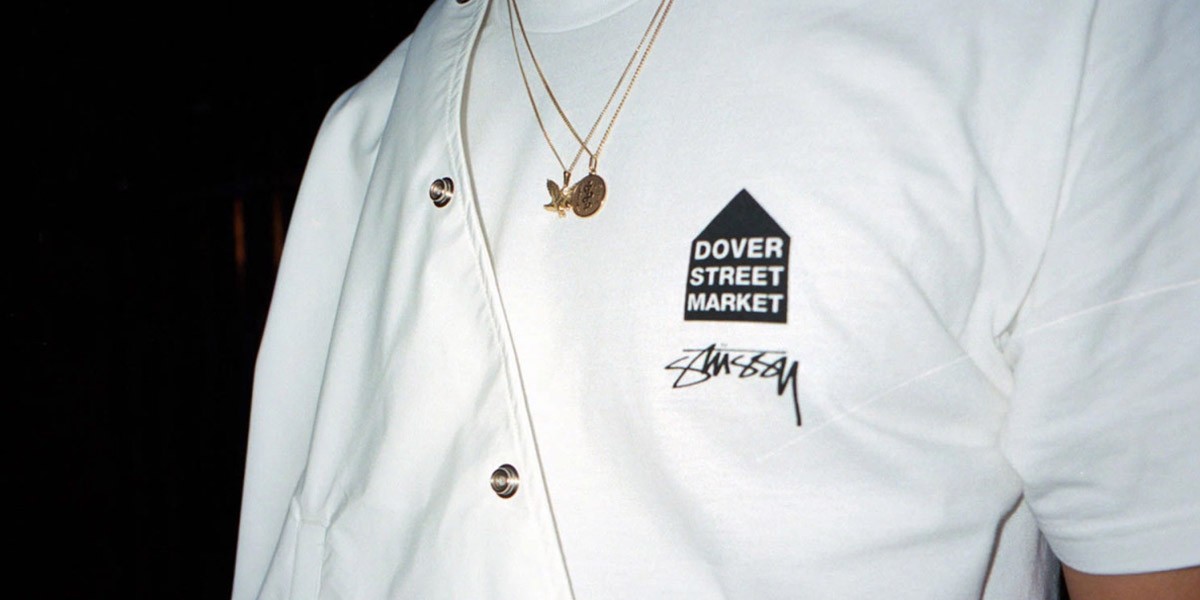 “I can only speculate as to why he left Stussy,” says Steven Vogel, “but why wouldn’t he leave? Isn’t that what the whole point of this rat race is? Get out as soon as you can? Leave work behind, raise a family, spend quality time with those who are most important and just do whatever the hell you want to do without having to worry about paying rent next month?” It would seem like a fair assumption that, for a kid who was raised on an anti-establishment diet, surrounded by beach-dwelling hippies, that entrepreneurial success was not Shawn’s main priority. He did, however, help pioneer the situation we have today, where people can effectively create their own jobs through sheer determination and creativity, instead of having to slave away at a dead-end office job for forty hours a week. Shawn kept a low profile in the decade following his departure from Stussy, presumably enjoying the fruits of his labour as he took up residence in Hawaii, and later Santa Barbara. “After leaving, I was just a dad for ten years raising my kids,” he told Japanese magazine Honeyee in 2009, after 13 years of general anonymity. In 2008, however, there were murmurings of Shawn making a return to the clothing business. This would eventually materialise two years later, as he launched S/Double (a moniker derived from a nickname his wife had given him). The aesthetic, as you might expect, was more mature, mixing derby shoes with hand-made surf attire. It was a seemingly unlikely combo, but when you added Shawn Stussy into the mix, it all kind of made sense. 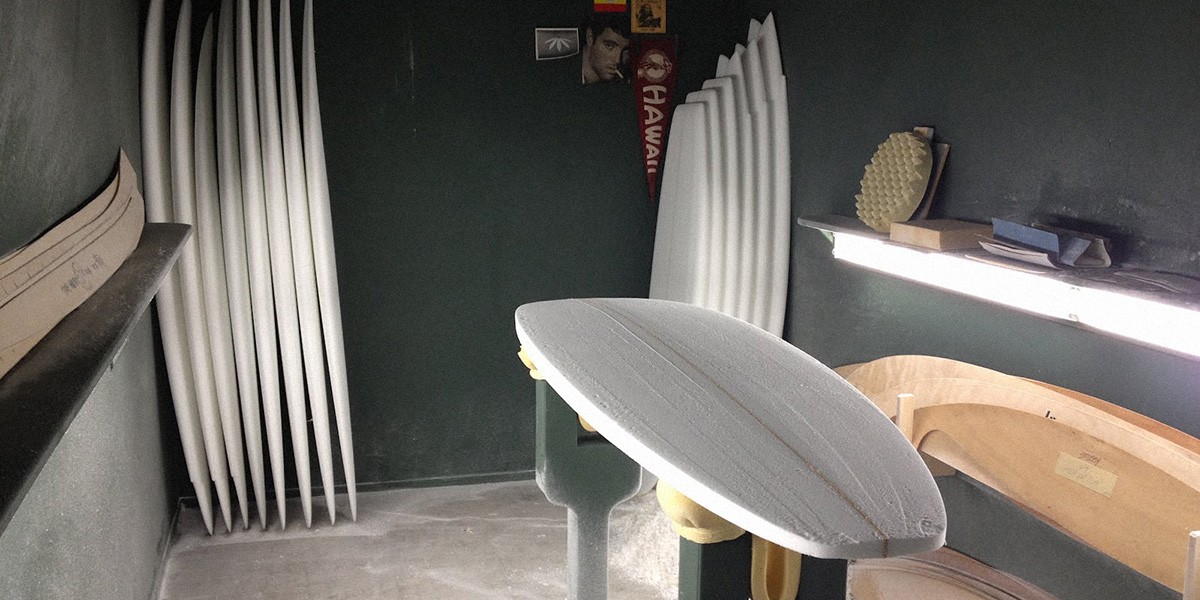 A letter from Shawn accompanied the launch of the website, promising that it would be “A modest and soulful adventure, akin to setting up your table in a space at the Rose Bowl, or your neighbourhood flea market… In this day and age of big, puffed up corporate launches and parties, I hope this is exactly the opposite.” It would be easy to interpret this as a snipe at his former label, but it seems more likely that is was a true reflection of his mind-state all along. This, after all, was a man who would dedicate a full day to shaping a board in Stussy’s early days, with Bob Marley blaring in the background, or enlist his mother to sew shorts for his brand. It’s not hard to see why he eventually grew uncomfortable with what Stussy had become. To this day, S/Double remains decidedly low-key, much like the man himself. The brand’s online content is interspersed with excerpts from Shawn’s personal life, as pictures of a family dinner sit alongside beautifully crafted boards. It is clear that it is a passion project, rather than a desire to cash-in on his relative infamy. It is refreshingly honest as a brand. In fact, a recent visit to his website would’ve greeted you with nothing but a simple message: “Taking a break for a minute… Going surfing and building boards through the fall…” It seems some things, in the mind of Shawn Stussy, are more important than money or materialism. Maybe sometimes how we measure success is deeply flawed – that it’s not about the hours you spend in the office or the money in your account. Maybe that’s his real legacy. You can find our latest selection from Stussy both here and in selected size? stores.   [Source: Highsnobiety]