size? stores: The pair that started it all.

We spoke to some of the size? store managers across the UK and Europe to ask them: What were the first pair of trainers you bought? Will Taylor - Supervisor in size? Bristol My first were actually White/Navy Leather Cortez. I went out to Oxford Street with my Mum and fell in love with some Air Max 95’s but naturally she freaked out at the price, she wasn't having any of it! In fact her words were pick another shoe, or we're going to Shoe Zone or something like that. I went around JD and settled on the Cortez. I liked how they looked on the shelf, but they looked massive on my feet. I was like 11 years old with size 8 feet with my Mum giving me the typical, "you'll grow into em" spiel. Once I did grow into them they were my go to crep! I kept them until I was 18 even though they were a size too small by the time I hit 13. Hold tight the Cortez, glad to have you back! 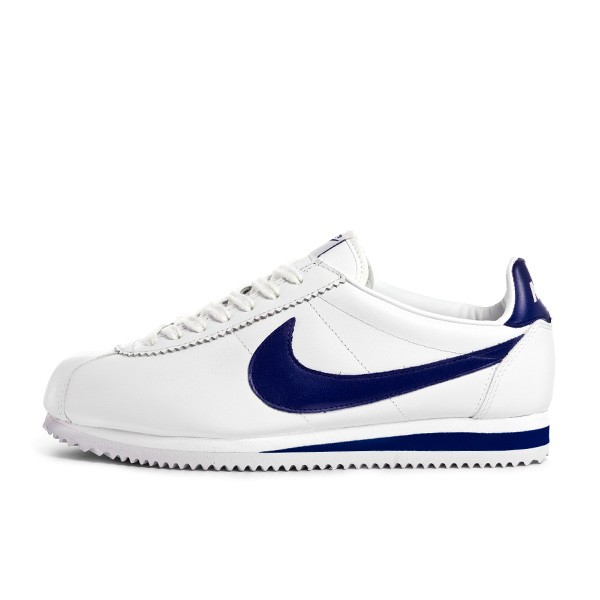 Brian Perry - Assistant Manager in size? Birmingham The first pair of trainers I purchased for myself were a pair of Nike Air Max 90's. They were all black leather for school. I had to save hard as we did not have much money as family, I remember handing over the cash like it was a thousand pounds! Since then the Max 90 has always been my favourite shoe. 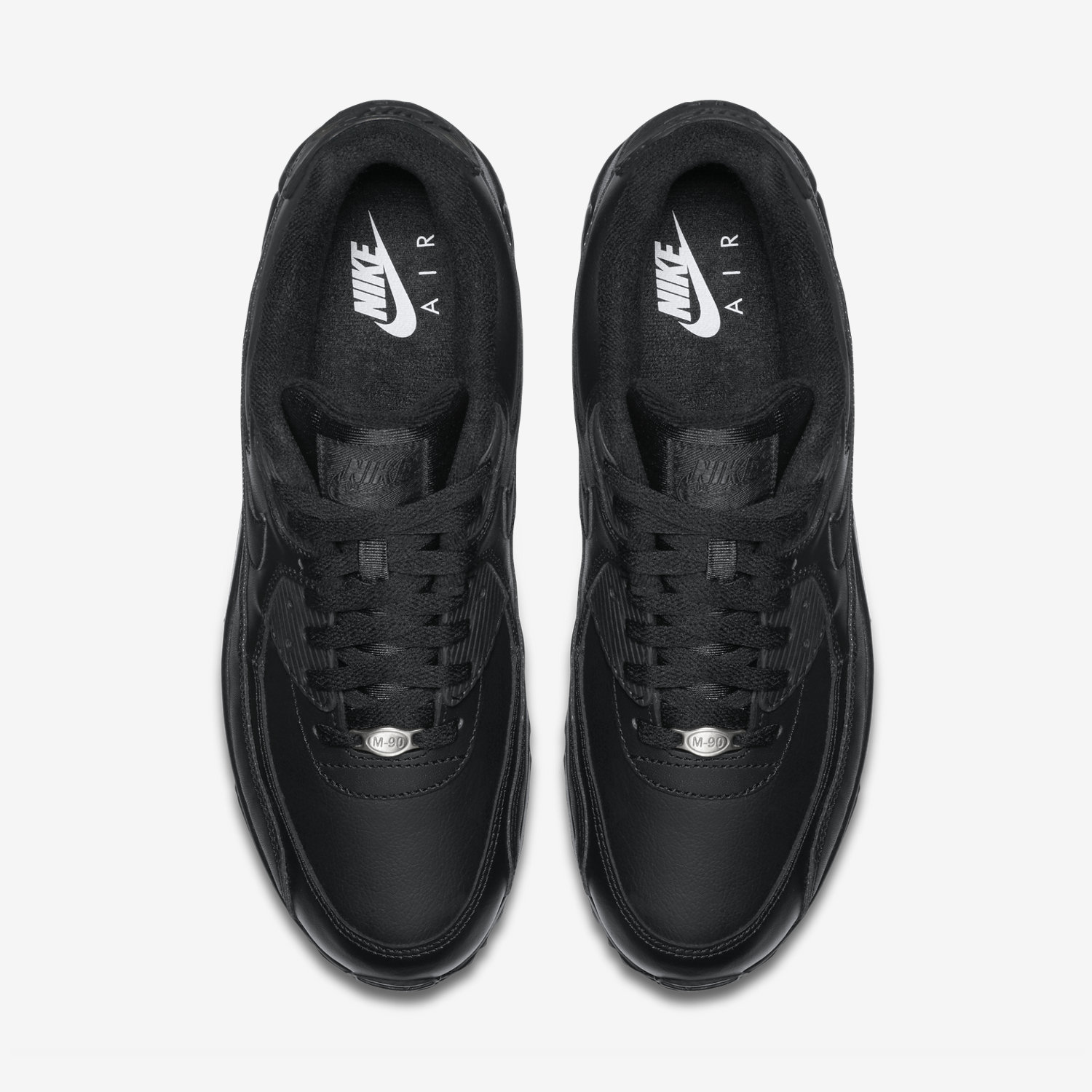 Brian Collins - Manager in size? Cardiff My first real shoe that I loved more than my Mom was the Reebok Pump Blacktop. When I had that shoe on foot I was cooler than Cool Spot, as a teenager of the 90's I grew up watching Michael, Scotty and Dennis play ball, while discovering musical greatness through Wu Tang and Tribe, so having that shoe on made me feel part of that Tribe. The shoe was also insane, it's white, dark green and contrasting Black upper, along with its aggressive 90's styling and pump system had me captivated. Even when they died I performed an autopsy on them, investigating the pump system and how it worked. That shoe and it's sub culture began a life long obsession. 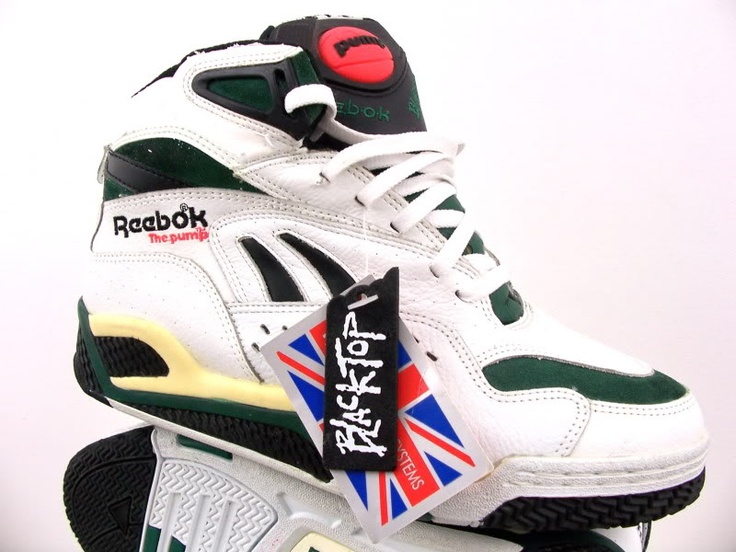 Dan Squire – Manager in size? Leeds For me it had to be the 2003 Jordan III White Cement. That was the first shoe I saved for after I started working full time and the first shoe that really got me in to trainers. I still remember the day finally being able to afford them and going in to sneakerville in Leeds to pick them up. I still believe that Tinker Hatfield designed the best Jordan of all time when he designed the III and it'll never be topped. As Complex once said "the Jordan 2 was a shoe, the Jordan 3 was a movement". 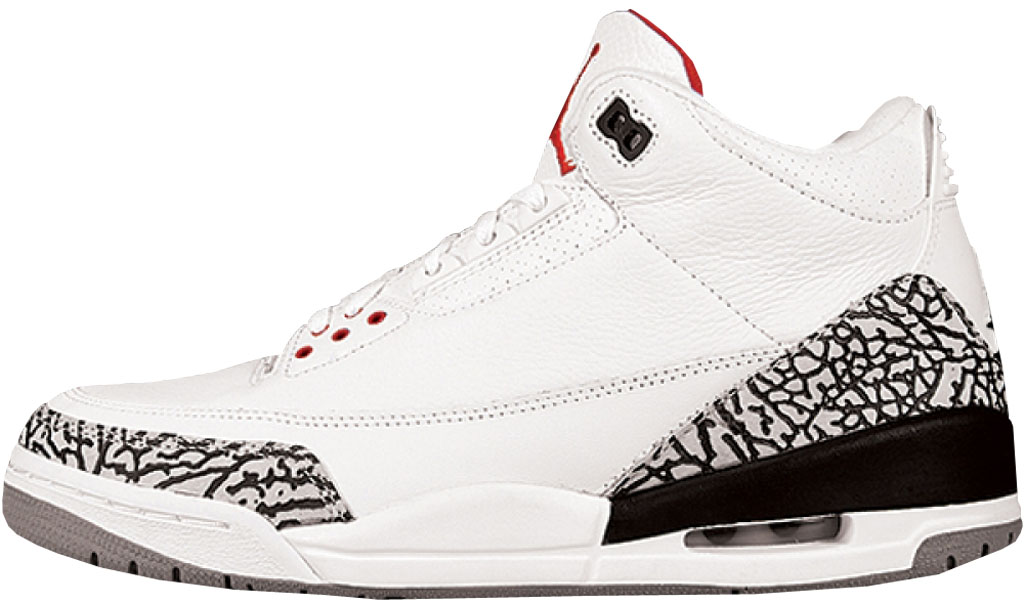 Dave Brownings – Manager in size? Brighton My first pair were a pair of Nike Air Force 1’s. When I was in in secondary school there was a kid who had a brand new pair of Nike Dunk Hi's wht/red and I was really jealous of them. He got so much attention over them even though it was against our uniform policy. I immediately wanted some so went to go get a pair. Needless to say I didn’t know what I was doing in this cool sneaker store, and got conned into getting a pair black and white Nike AF1’s in a size too big with an insole that would "make me jump higher". They were great though! 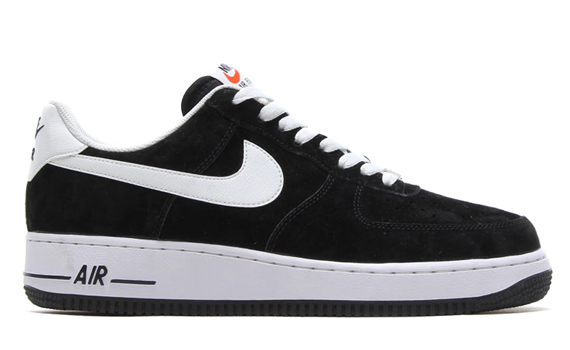 It was the summer of 1991, I remember saving every penny I made doing odd jobs around the house or washing the neighbours cars. I had to come up with £89.99 to buy my first pair of Jordan 6 Blk/infrared.

This was the best trainer in the world 'Tinker Hatfields' master piece'. This stealth bomber had no Nike swoosh branding It just sported the black on black 'Nike Air' embroidery on the heel tab (a rarity these days) eventually I had the money just before starting back at school.

Though I had promised my parents I wouldn't take the shoes to school, after a kid was stabbed in the United States for his J's in 1990/1. That didn't last long these were too good to take off! I literally wore the hell out of em, eventually playing football on the Astro pitch at lunch times had taken its toll on my now battered 6's. If I knew then what I know now I would have kept them on ice! 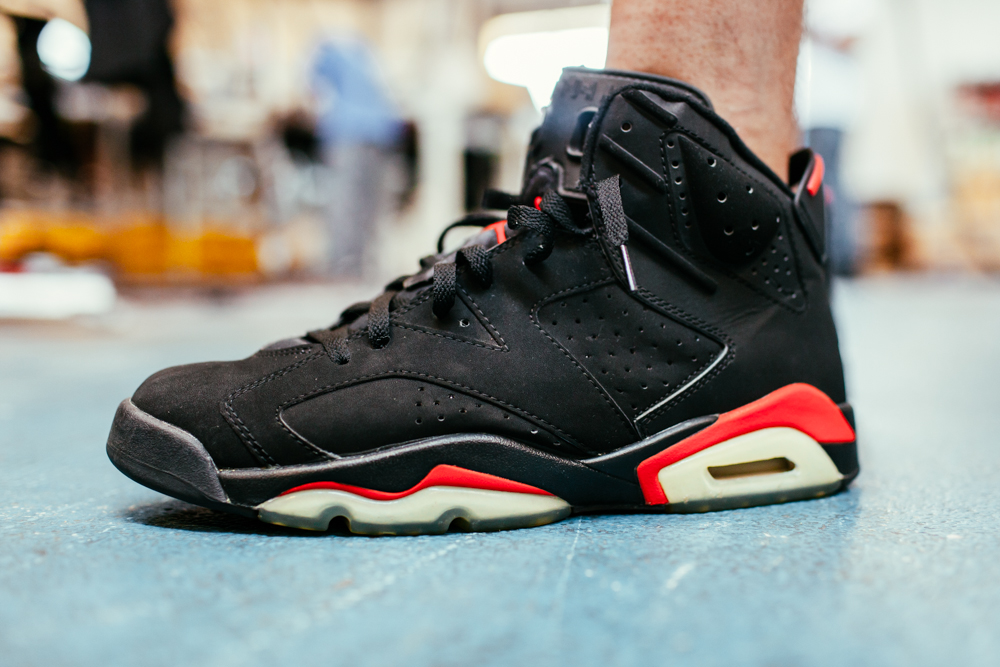 I remember going with my Mum & Dad to get a new pair of trainers for "best" to take on holiday, a pair that I'd have to look after and not play football in. We'd gone to First Sport in Solihull and I still to this day remember walking in and seeing the bright red Air Max Deluxe in the wall. I think they may have even been in the sale? I can't imagine my Mum letting me get a pair of Air Max at full price in those days.

I don't know whether it was the lairy colours or that enormous air bubble that drew me in, but I thought they were incredible. I couldn't wait to show my friends.

Unfortunately I must have stepped on some glass whilst on holiday and I popped the air bubble. I took them back to First Sport but they'd sold out, I was absolutely gutted. I ended up changing them for some white Tailwind's from JD..

To this day I still don't think they've been retro'd, so if anyone at Nike is reading this, please bring them back! 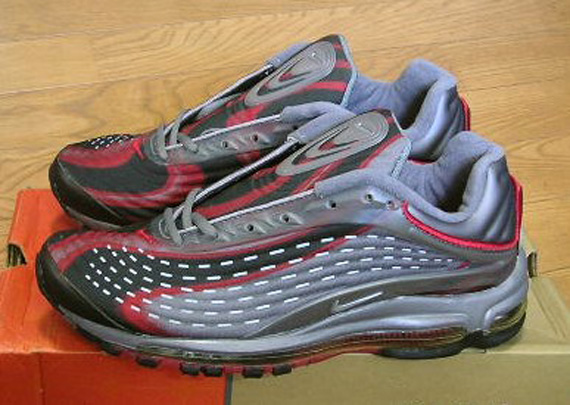 I think the first shoe I can clearly remember owning was probably a pair of Cica Lights or it may have been a pair of those Green Wellington Boots from Clark's that look like frogs?! Although they are both tidal pairs of kicks neither have really gone down in Sneaker History!

The first shoe I properly remember picking out for myself was a Black and White pair of Vans Old Skool's, I used to wear these a lot at school because they were mainly black and I always just liked the shape of them.

Skate shoes back then (90's early 00's) were in a different lane to the "High Performance Footwear" you see now, they were massive! (Hold tight all my D3 Dons!), they usually had super chunky tongues and came with even chunkier laces and I never really liked how big they looked on my feet.

There was just something about the Old Skool for me, I liked the simplicity of how the side stripe looked running down the the side of the shoe and have always liked the red logo tab Vans put on the back of their classic models, for such a simple shoe these two features just make them pop! You don't want to get me started on what I like about Waffle soles... What's not to like?! I think I wore these for the majority of Secondary school, they were always a go to, especially back then when I couldn't afford some of the more expensive models of shoes I liked. 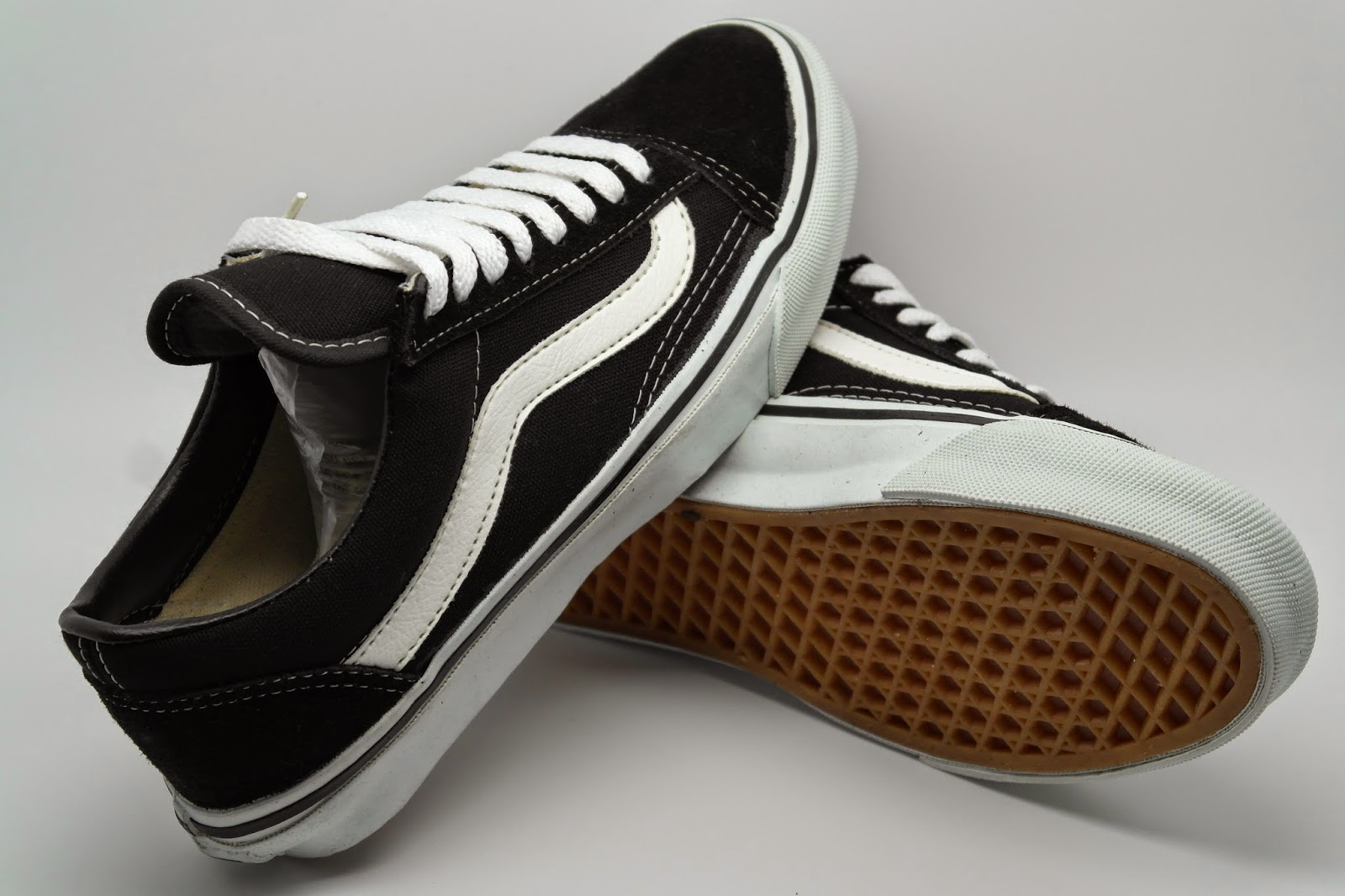 I have been fascinated by shoes shoes for about as long as I can remember. I can remember class mates coming back from holidays in the states wearing Reebok Pump "BlackTop". This was the first shoe that I fell in love with, closely followed by the Jordan 6 Black Infrared both in 1992.

When I first started earning real money after Uni I was in London about 2003 and I walked past the Covent Garden store, I had never been in a size? before. There like a grail in a perspex there was the Reebok 15th Anniversary Omni Lite Pump "Berlin". Nothing could have stopped me from buying these shoes and there are still pride and place (if a little worn) in my collection. 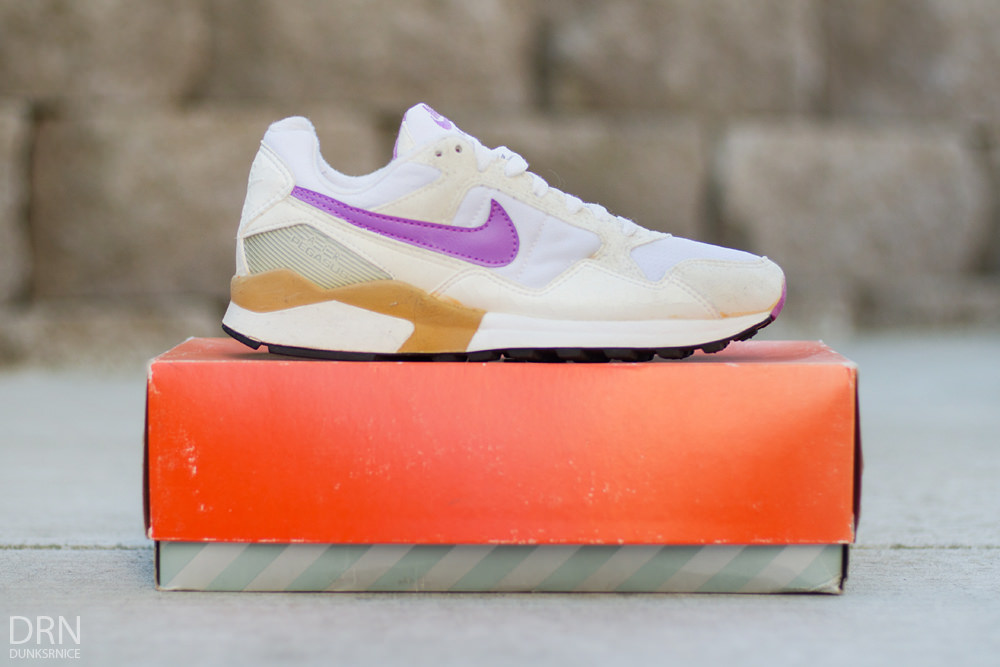 The first pair of shoes I ever bought for myself was with birthday money for my 15th birthday back in 1996. They were called the  Nike Air Shake Ndestrukt.

It was the basketball player Dennis Rodman's Signature shoe given to him after his rise to weird stardom in the NBA due his antics on and off the court. The shoe still is one of the most distinct I think, in Nike's history (some would say ugly also) with the side lacing system similar to some football boots of recent years. As well as a HUGE swoosh on a ribbed upper with a mini swoosh on the forward part of the toe piece and another mid sized swoosh on the back heel.

This shoe basically screamed NIKE at you and being a Chicago Bulls fan at the time and being into basketball well as much as you could be then as you were lucky to get Sky Television haha. I had to have them! This is the shoe that really started my trainer obsession or collection if you like and that one pair turned into quite a few more over the years!

I still have these wacky weird and wonderful shoes now and couldn't part with them, they are in very good condition considering they're 20 years old coming up and I actually wore them a lot when I was younger haha.. 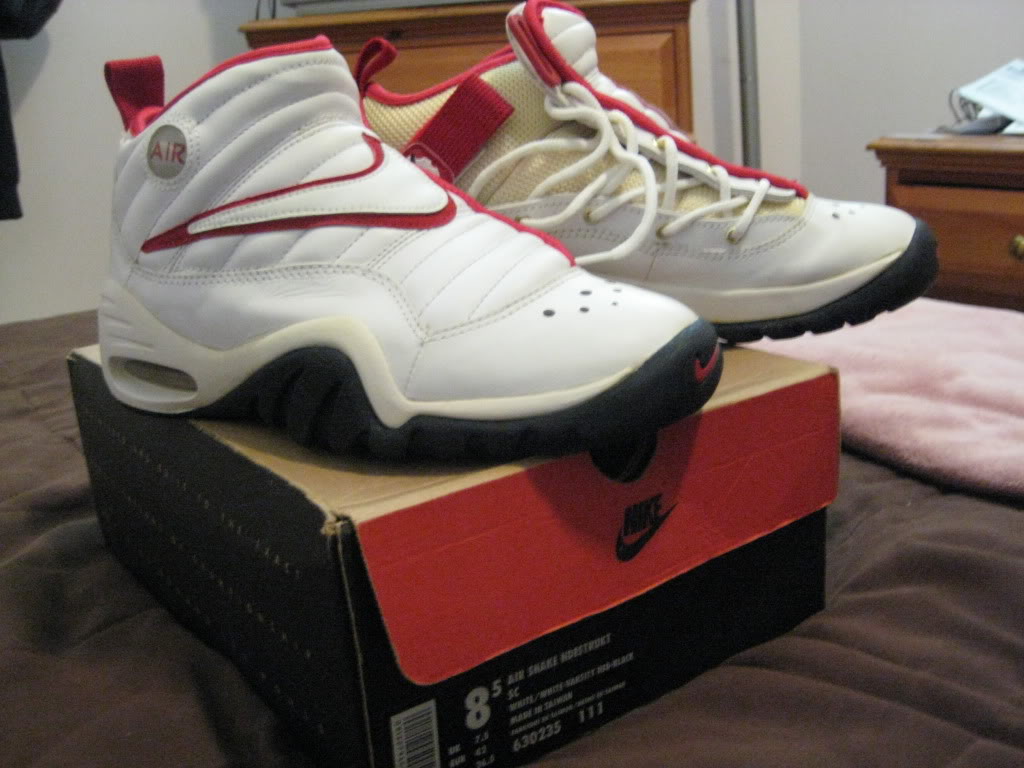