Influenced by My City.

To coincide with the launch of our latest size? paper project, Influenced by: The City Life, we caught up with some of our friends and staff at size? to see what their city means to them. We tasked them as if they were to design a shoe for their home city or town. See what they have all come up with below. 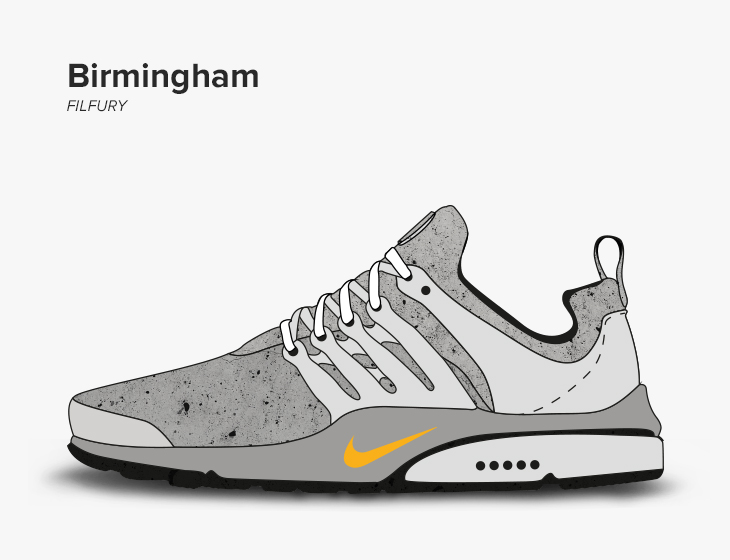 "My home town, I’ve travelled the world but nothing feels quite like home than when I see the dirty concrete pillars of spaghetti junction.

A shoe of choice in my area was the Nike Air Presto, so I went with that for home town comfort, inspired by grey concrete and bokeh traffic light" 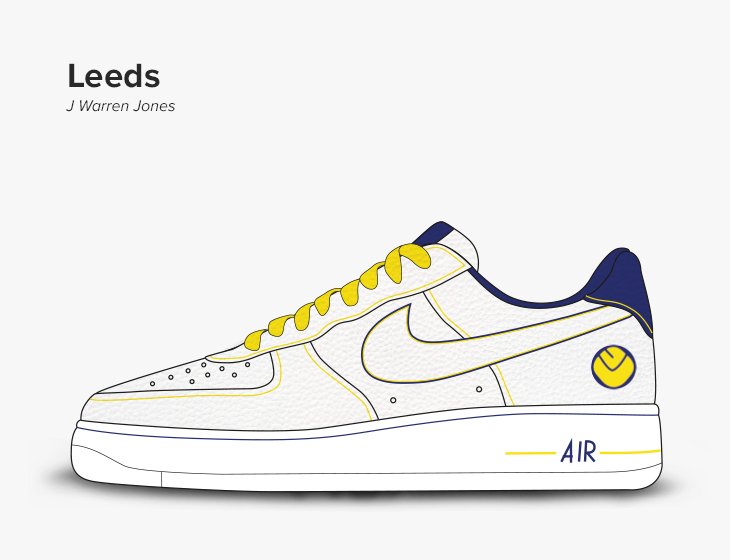 "The white high top with the blue swoosh and strap was the first pair of Air Force 1's I owned but they started to appeal to me as a collector when the likes of the LA Lakers, West Indies and Puerto Rico's were dropping.

The simplicity of the shoe with the appropriate colour reference and then the stitched heel logo was just killer every time. Clean. Simple. Instantly recognisable.

I've done the same thing here with my choice to represent Leeds - the city of my birth. Simple all white premium leather base with blue and yellow accents throughout. Yellow stitching, blue heel tab and lining and a choice of 3 laces in white, blue or yellow.  I've added the classic 70's Leeds United logo to the heel just like those favourites of mine from back in the day. It's the same aesthetic and instantly recognisable. We are Leeds." 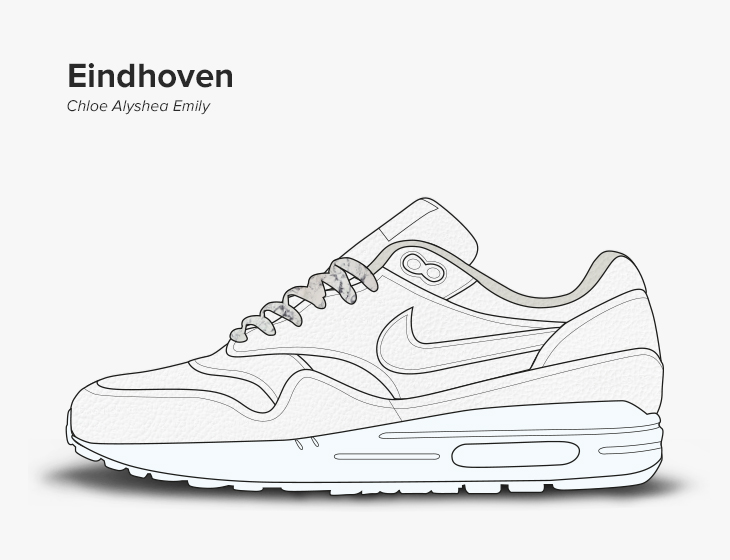 "What if I could design my own sneaker for my city? It would definitely be inspired by the old Philips light bulb factories at the industrial Strijp-S area, called ‘Anton’ and ‘Gerard’. The ‘twin’ buildings are located in Eindhoven, The Netherlands, ‘The City of Light’ where I was born and raised.

The two industrial buildings can be recognised by their white facades, large windows and concrete floors and walls. A few years ago they stripped down the whole place to start over and create design lofts, resulting in a perfect area for creative minded people to live and work. Also, the buildings have that minimal design aesthetic, something that affects me every time when I pass by.

Translating this into my ultimate sneaker, I would strip down a Nike Air Max 1, one of my fave classic silhouettes, to it’s core for a clean and minimal look. No branding at all, so say goodbye to the swoosh. The sneaker would be made of all white leather from the outside to reflect the strong, white appearances of ‘Anton’ en ‘Gerard’.

I would make the outsoles from a matte transparant rubber for a mysterious see through to implement the magical windows, while the insoles are grey colored, representing the concrete floors and walls. To give it a personal touch, I would top it off with marble patterned laces, just because I have this little marble obsession going on." 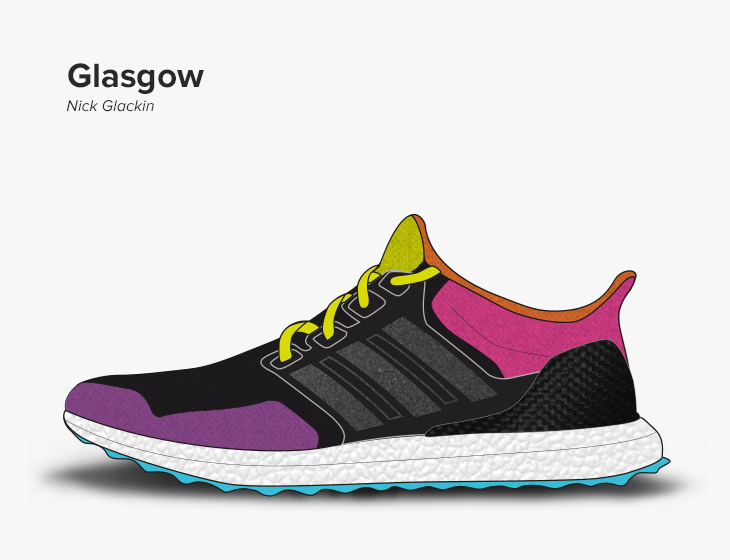 "It’s clear as you walk through the city, Glasgow city’s history can be found in many different places; museums and art galleries, libraries and archives, historic buildings, rivers, canals and architecture. But what I love most is how compact, diverse and ever evolving the City of Glasgow is.

To reflect Glasgow’s vibrancy and evolving energy, I have chosen to base the colour way of the shoe on the ever developing night lights of Clyde Waterfront, where you can find contemporary buildings and structures such as the Science Museum, the SECC and the SSE Hydro.

For me, what better shoe to marry the new ultramodern Clyde Waterfront, than the Ultraboost. My favourite shoe of the moment, unparalleled for comfort with a sleek, fitted tech woven upper." 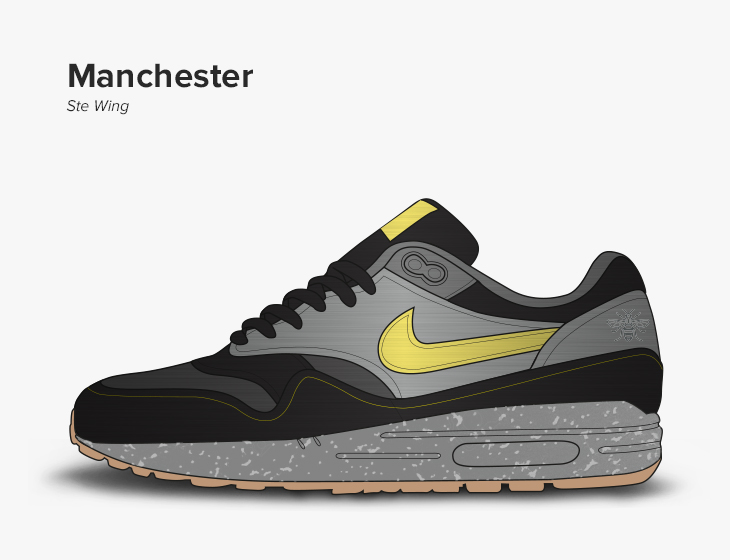 "My Manchester inspired design including the humble Manchester Worker Bee that has symbolised our great hive of a city since the Industrial Revolution. Starting with the gum sole as a mark of how neutral us Mancuinion's are, accepting and welcoming a multicultural mix of people and brackgrounds.

The black and greys come natural to any Mancunion, being born under the grey clouds of 'rain city'. The silver is to express the growth and development of our city, the high rises and iconic buildings like Betham Tower and Piccadilly Train Station.

The black and yellow detail are the colours of the manchester working class bee. With one look at this shoe and its details I give you... The MCR Air Max 1 - Iconic shoe. Iconic colours." 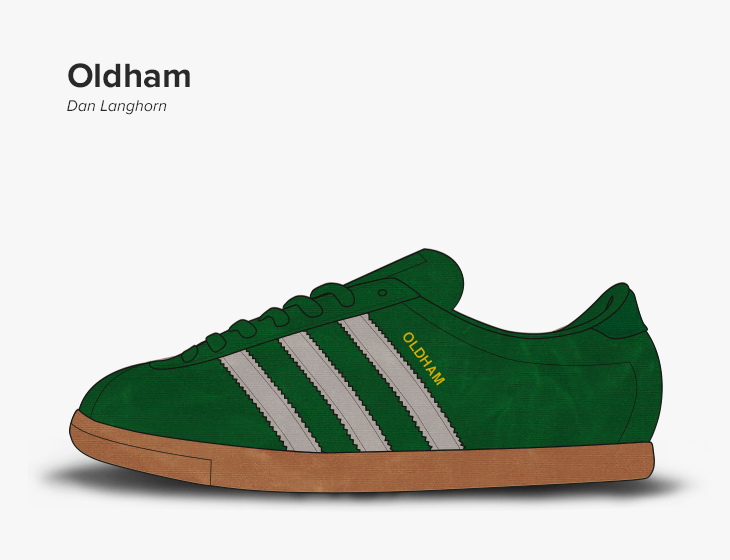 "The jewel of Greater Manchester, Oldham has seen industrial revolutions once turn the town into a global powerhouse for textiles, been the constituency for a certain Sir Winston Churchill and also nurtured the creation of the world’s first ‘test-tube’ baby, as well as having a proud sporting heritage. It’s the latter of these which is the reason behind the choice of silhouette, the adidas London, a lasting beacon of style from the football terrace.

Construction consists of a heavy waxed cotton that nods to the cotton spinning industry which once thrived in the town, as well as offering protection from the infamous Oldham weather. Green is the predominant colour on the model, representing the rolling Pennines which surround the town and punctuating this is the Three Stripes in a solid grey, personifying the concrete used on the Town Centre’s buildings, which sit amongst the surrounding hills and greenery.

Sitting atop a milky gum sole unit and finished with the famed gold foil, I introduce the concept for the adidas Originals ‘Oldham’." 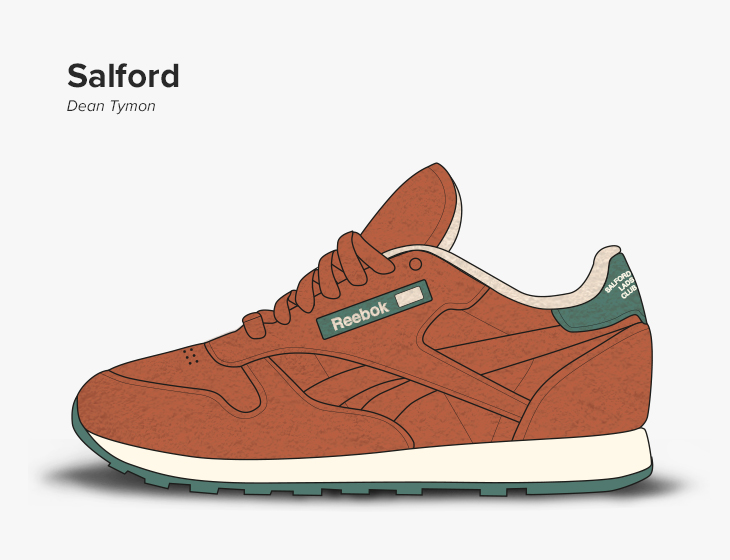 "Salford Lads' Club is a recreational club in the Ordsall area of Salford, Greater Manchester. The concept of a boys' club grew up in the 19th century as a way of keeping young boys "off the streets" and encouraging them to become "good and worthy God-fearing citizens”

The Salford Lads Club represents Salford, a deprived, tough area of Manchester that stick together to help each other, the club is still fully functional lads club to date." 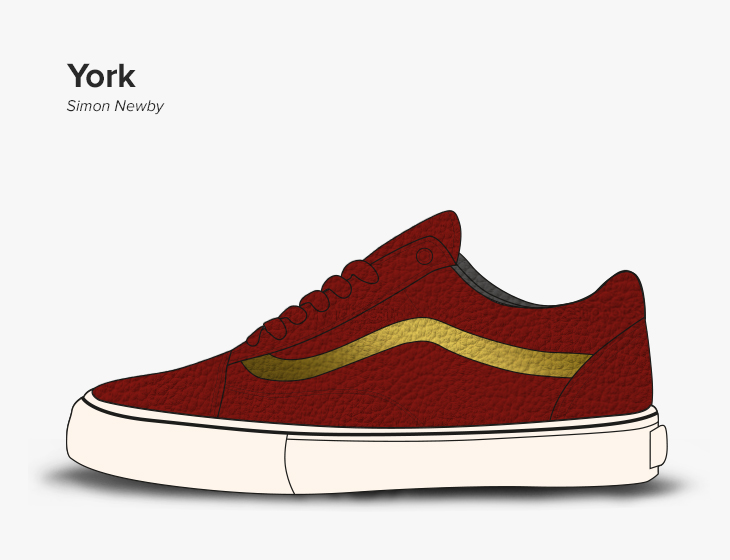 “Founded by the Romans in 71AD, York is an small, quaint city in the North East of England. It’s had a rich heritage witnessing the coronation of a Roman Emperor, a Viking invasion and the construction of the Minster, one of the largest cathedrals in the world. It is the most haunted city in Europe, was a major hub of the railway industry and also the birthplace of both Rowntree’s and Terry’s confectioners! With York being such a historical city, due to the name (rather than a thriving skate scene) I picked the Vans Old Skool as my silhouette. The design takes inspiration from Betty’s Café Tea Rooms in the centre of the city. It's founder Frederick Belmont travelled on the maiden voyage of the Queen Mary in 1936 and was so impressed with the splendour of the ocean liner that he employed the same designers and craftsmen to build the cáfe we know today. The colours on my Vans Old Skool ‘York' are taken from Betty's deep red logo, matte gold exterior signage, black uniforms and almond white from their most famous bakery product, the Fat Rascal. They are finished in a soft and supple tumbled leather referencing the quality craftsmanship of the café itself” 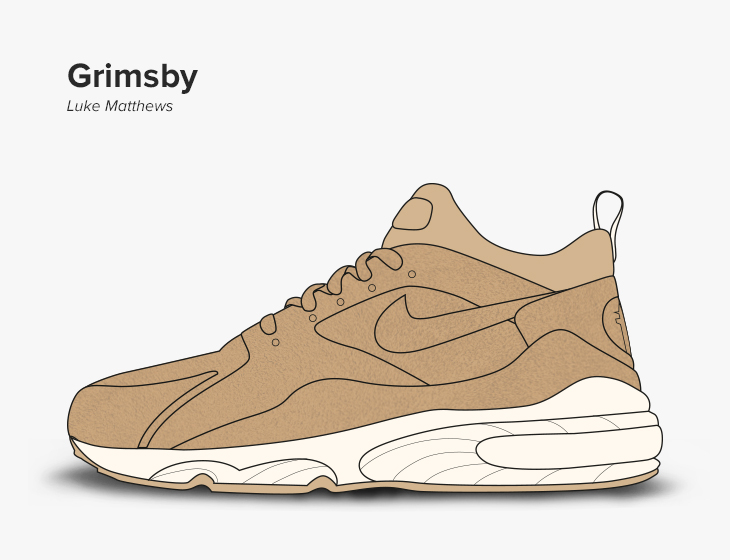 "Grimsby. It may not be a city, but it is home.

The docks. The seaside. The mighty mariners. The town prides itself on its Viking roots and strong working class background... not starring in Channel 4's Skint or being mentioned at the end of a Young's Fish advert featuring David Beckham.

For the shoe itself, I’ve opted for the Nike Air Max 93, my personal favourite from the Air Max family. I’ve also made a slight adjustment by adding a heel tab onto the back just to balance out the silhouette’s overall profile.

A buttery soft sand suede reminiscent of Cleethorpes' beautiful beaches basks upon the upper whilst being balanced out by an off-white midsole. The heel tab features vertical black and white stripes, paying homage to Grimsby Town F.C.

The shoe is finished off with the iconic Dock Tower, a maritime landmark and beacon depicting the entrance to the Royal Dock, embossed into the heel."