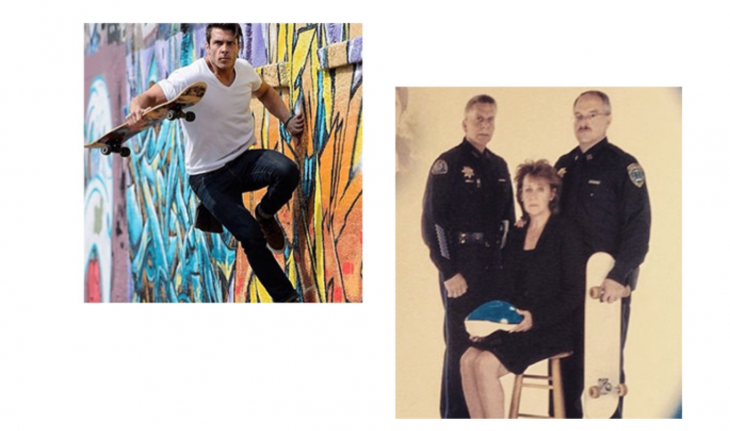 ‘How to Not Look Too Silly on a Skateboard’ by the New York Times and wikiHow’s ‘How to Attract a Skater’ are just a few of our favourite commonplace media interpretations of the skating scene.

We’ve included several of our favourite and funniest articles circulating the web.

You’re not a street kid anymore, so try a longboard with big soft wheels for easy cruising and carving. Good starter boards include the Pintail 43 by Original Skateboards and the Carbon Superglider by Earthwing Skates.

Same goes for padding. The 187 Killer Pads make a stylish set that the kids won’t laugh at.

Your rump may have bulked up, but you’ll thank yourself for the extra protection. Crash Pads makes a line of padded underwear.

While you’re picking up Bengay from the pharmacy, grab a box of Band-Aid large adhesive pads for those inevitable spills.

Essential reading includes “The Mutt: How to Skateboard and Not Kill Yourself,” a memoir by Rodney Mullen, a pioneer of the kick flip, and “Stalefish: Skateboard Culture From the Rejects Who Made It,” a survey of skate culture by Sean Mortimer.

For inspiration, see “Lords of Dogtown,” the 2005 film starring Heath Ledger, or flip through “Locals Only,” a photography book by Hugh Holland capturing 1970s skate culture.

A total beginner? Get a copy of “Skateboarding Explained: The Instructional DVD” by Dan MacFarlane. Or search “How to Skateboard” on YouTube.

Skateboard Slang by About

This means the same as "cool" or for you older guys, "rad". Pretty much anything can be sick. You can pull off a sick trick, have a sick board, or a skatepark can be sick. It's one of those slang words like "bad" was a decade ago, meaning the opposite. Along with "sick", something really cool might get called "ill", "insane", "gnar" (short for "gnarly"), or even "rad" or "righteous".

To like something or to be excited. I am stoked that you are reading this. I'm stoked I can land a tre-flip. The word comes from making a fire bigger - when you add fire to it, or fan the flames, you are "stoking" the fire.

Not well done, or not trustworthy. A sketchy trick looked badly done ("clean" is the opposite - a clean trick looked flawless). A sketchy person is someone who you don't want to bring home for dinner. A sketchy skateboard is a piece of junk that might break. I think it's funny that the shoe company "Sketchers" tries to make shoes that LOOK like skate shoes, but are, in fact, sketchy.

To bail is to either fall, or to jump off of your board right before falling. It doesn't get used all the time though - some people just say to fall or crash. The word "bail" is more traditional in skateboarding, but if the people you are around don't use it, you might sound like you're trying to hard if you insist on saying "bail" all the time!

How to Attract a Skater by wikiHow

1. If you're a huge skater, you got this one down perfectly.

If not, see below:

Smile and say 'awesome' or 'cool' when they do something really impressive. They are not doing these to impress you though, so don't overdo it. Try it casual - Be friendly and flirty. But not too flirty...

3. Ask questions, it will show them that you're interested and really care about their passions.

They should always feel like you support what they do. Maybe they will learn to do the same for you.

Ask them to show you how to stand on a skateboard or how to go. Remind them you're a beginner and don't want to do any advanced things. Skateboarding is a really creative hobby, and they will be proud when you get good!

5. If you know how to skateboard, do some tricks in front of them!

This might get them interested in you. If you're really good, impress them, but be modest about it.

6. Don't lie about your skater skills, EVER.

If you say you can, and you really can't, they'll think you're a poser. Be yourself, and not a sk8r wannabe.