The Onitsuka Tiger and ASICS story began in 1949 when Kihachiro Onitsuka created Onitsuka Co Ltd. Motivated by a lack of self-esteem in Kobe's youngsters post-war and a belief that fitness was a significant solution, the company took shape. Striving for perfection, innovation was part of the output from the earliest days of the company. A sound mind in a sound body was Onitsuka's original vision for betterment and it's still part of the plan. 1949 - ONITSUKA LAUNCHED In the early days, the company was known as Onitsuka's Tiger — something that recurred on boxes, catalogues and news bulletins that during the first decade of the brand's existence. 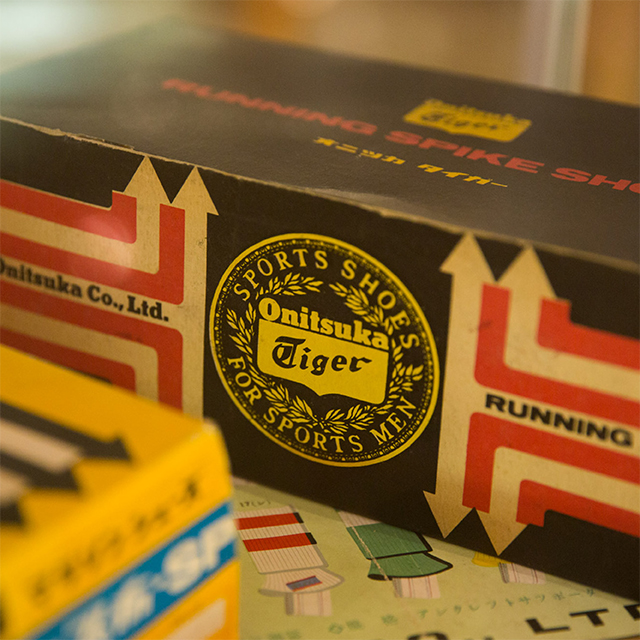 1952 - OK SHOE Basketball shoes had been some of the earliest sporting designs from Mr. Onitstuka's company, with the earliest, the OK, introduced in 1950. The first shoes were fairly generic, but it was a eureka moment during dining that would help change everything. Looking down at his plate, Onitsuka saw potential in the suckers on the octopus tentacles that were part of his dish. That led to the development of the suction cup patterning on the outsole of the new OK (an abbreviation of Onitsuka Kihachiro) that provided superior traction and a point-of-difference with other shoes on the market. This design would evolve to include details like an internal strap to secure the foot by the close of the 1950s and that sole would be incorporated on future designs from the brand like the Fabre. 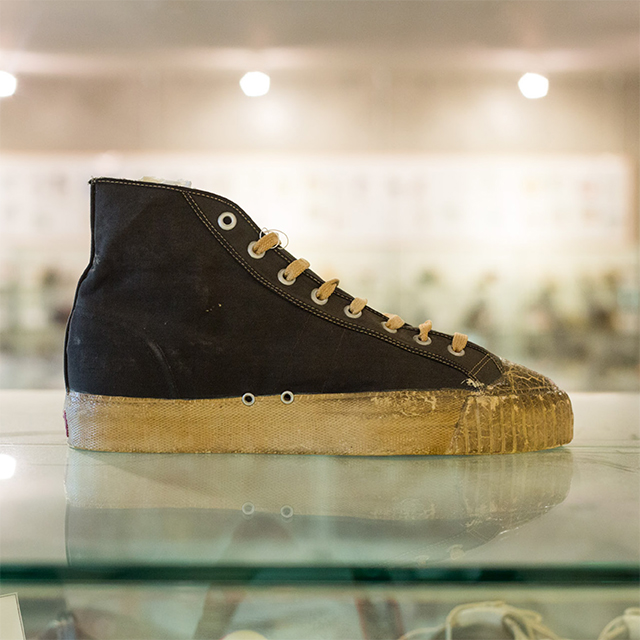 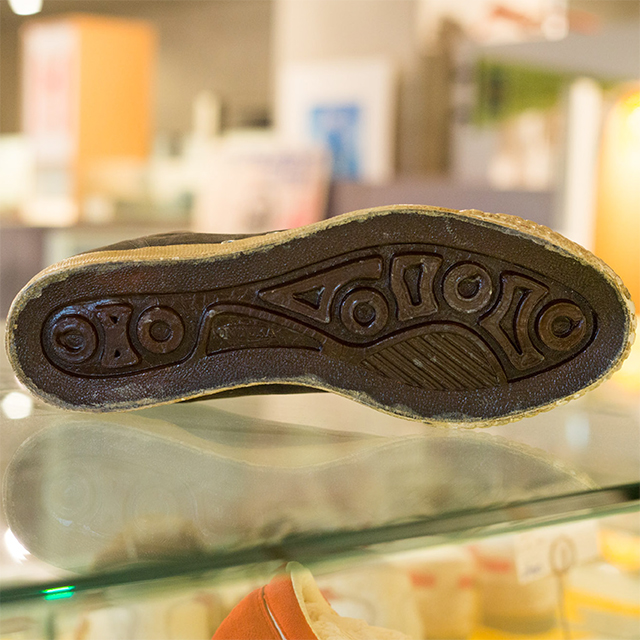 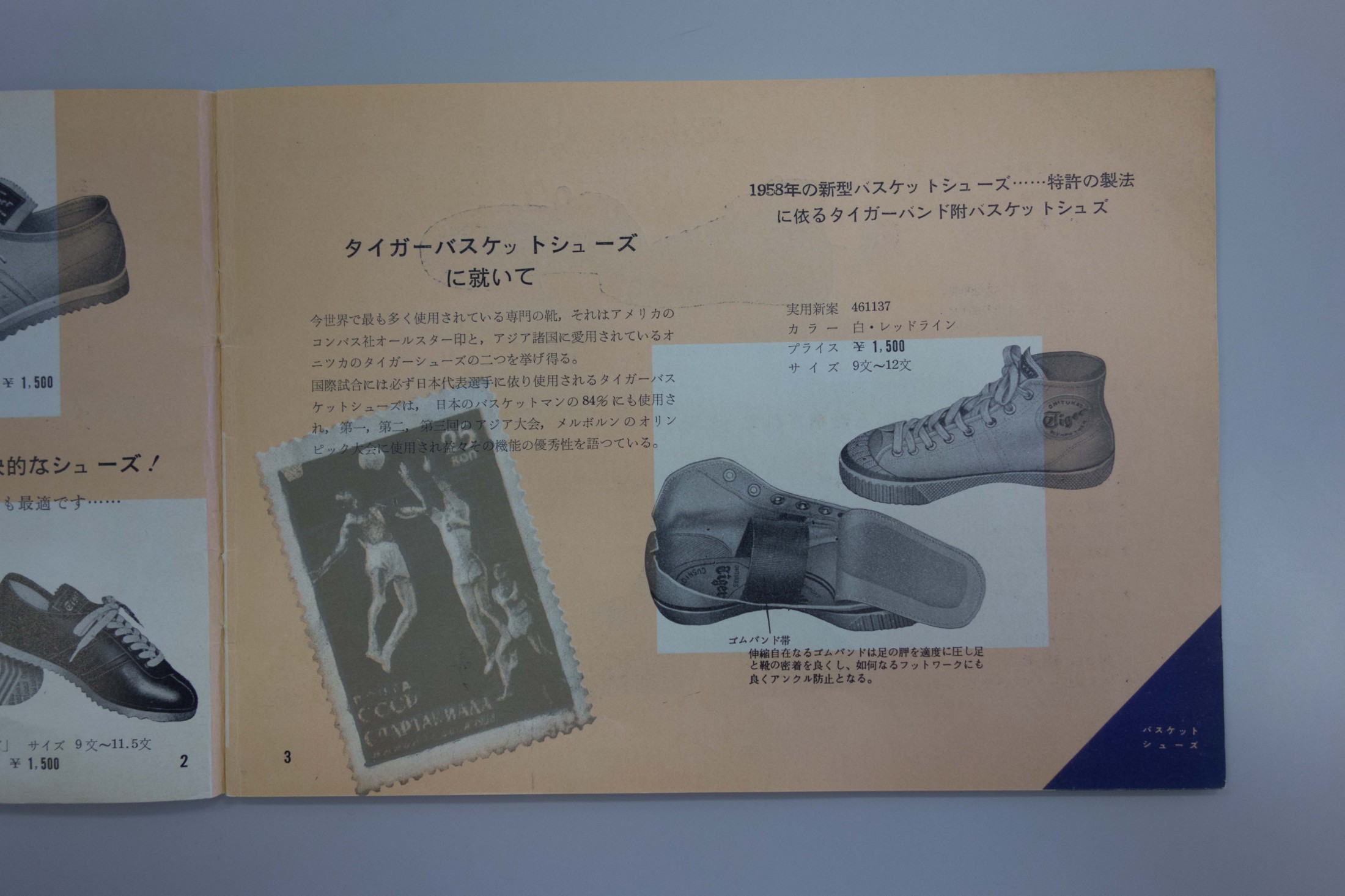 1953 — MARATHON TABI Tabi socks go back to the 1500s in Japanese culture with their split-toed fit and distinctive look. There were even armoured versions for samurai. A perfect example of Mr. Onitsuka's union of tradition and commitment to the athlete, the Marathon Tabi was an early example of exploring barefoot, minimal approaches to running — laces, arch support and, crucially, a rubber sole mean that it could go the distance. Looking at the Marathon Tabi, many would be convinced that this was a relatively contemporary creation, rather than a 61-year old design. 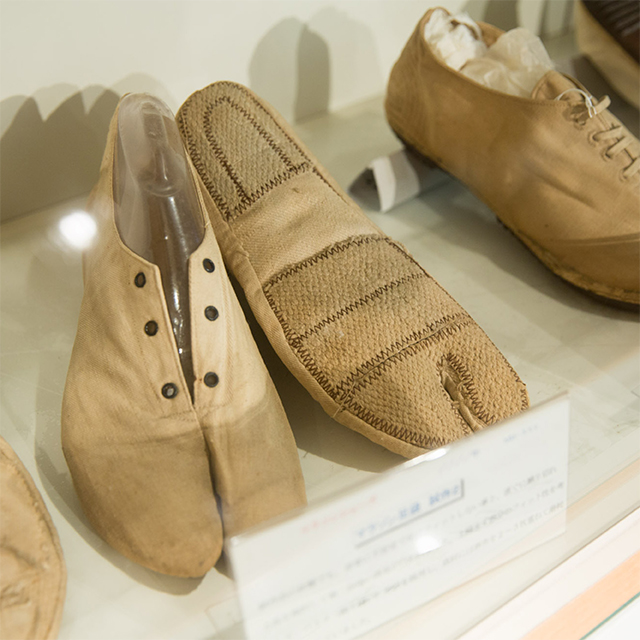 1954 — MARUP After the Marathon Tabi, Mr. Onitsuka and the team's further explorations into distance runner's needs let them to investigations into foam midsoles for extra cushioning and comfort. That technology had made an appearance by the mid 1950s, but this design would bring that technology to Japan. The Marup, was the original foam midsole Onitsuka Tiger shoe, with a name that started as Marathon Up, then Mara-Up, before settling on Marup. 1956 — A TYPE LEATHER AFTER RUNNER SHOES Onitsuka Tiger's approach to dressing Japan's athletes didn't begin and end with the track and field — it covered an array of disciplines, plus functions and ceremonies. The delegation shoe was made for the Japanese team to wear outside of their chosen sporting activity as well as for training — the forefather of today's comfortable, recovery statement designs for podium wear. Made for Melbourne, the lace-down tongue and jagged leather panel on the toe of this silhouette merged formality with athletic looks. 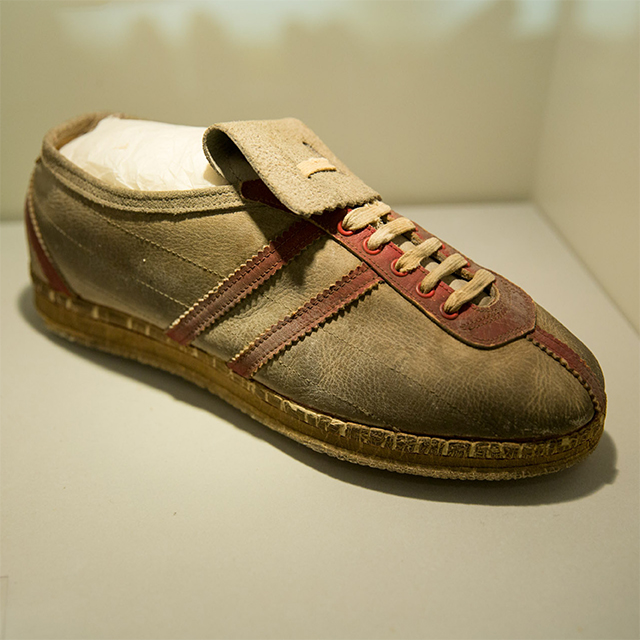 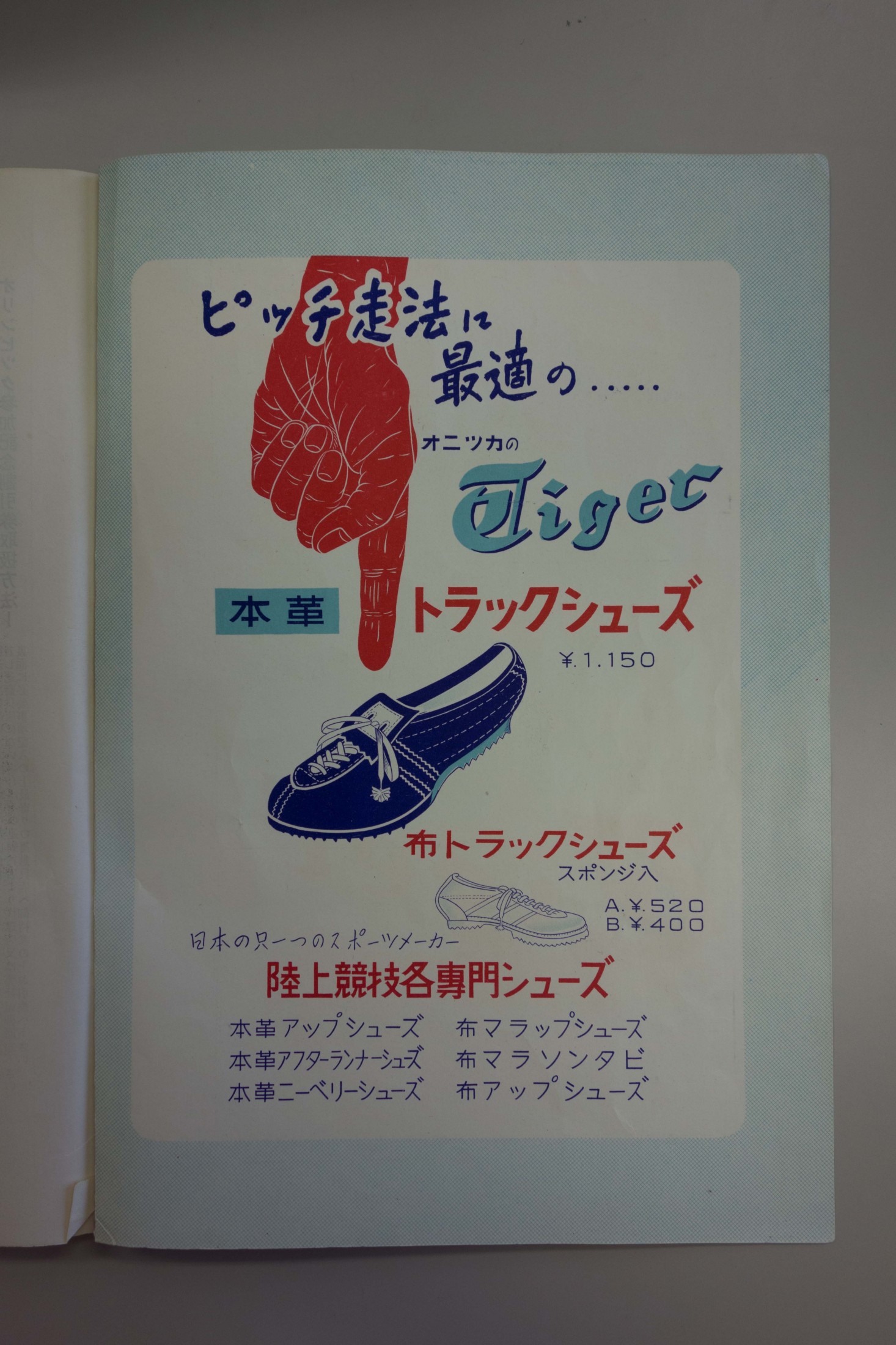 1959 — MAGIC RUNNER Think that running technologies are a product of the 1980s? Think again. In a quest to reduce blisters during marathons, several options — including liquid applications — were discussed, and prototypes included holes in the sole, which let the foot breathe but let sand and dirt in too. Blisters form when body fluids concentrate to cool the heel on impact — a motorcycle's air cooling engine system was the eureka moment here. Ventilating the front of the shoe's sole let air in during movement, but holes in the side let the air leave too when it was raised to make sure it was out completely. Rubber tape enhanced elasticity on that curiously shaped sole of a shoe that was, appropriately, given the Magic Runner name. 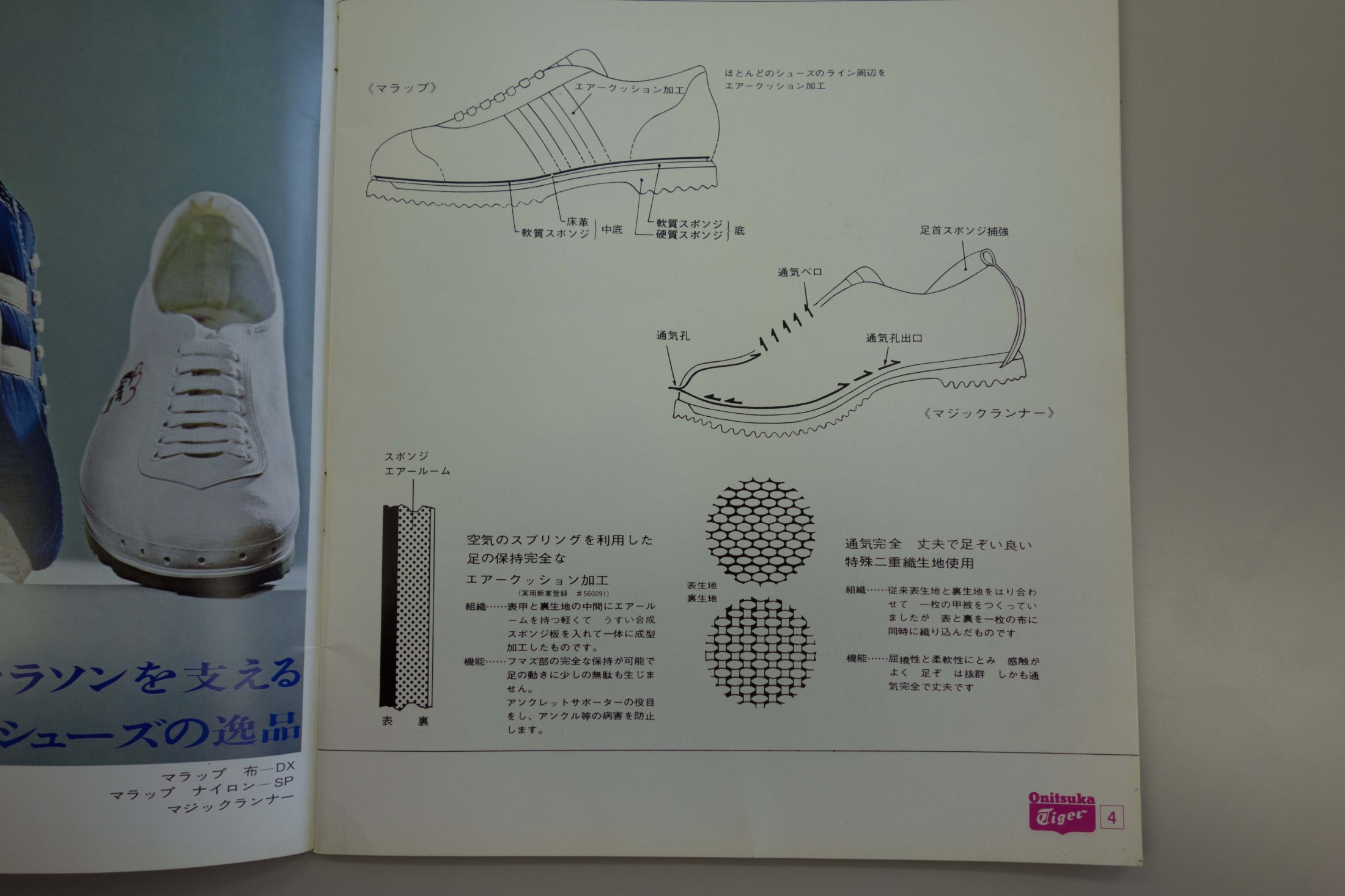 1959 – SUPER MARUP The Super Marup continued the Marup's exploration into comfort during distance runs by uniting the Marup's foam midsole and the Magic Runner's emphasis on airflow. At this point, Onitsuka Tiger shoes would carry a stripe branding design to separate themselves from other brands on the market, as opposed to the more matter-of-fact looks of earlier athletic styles. 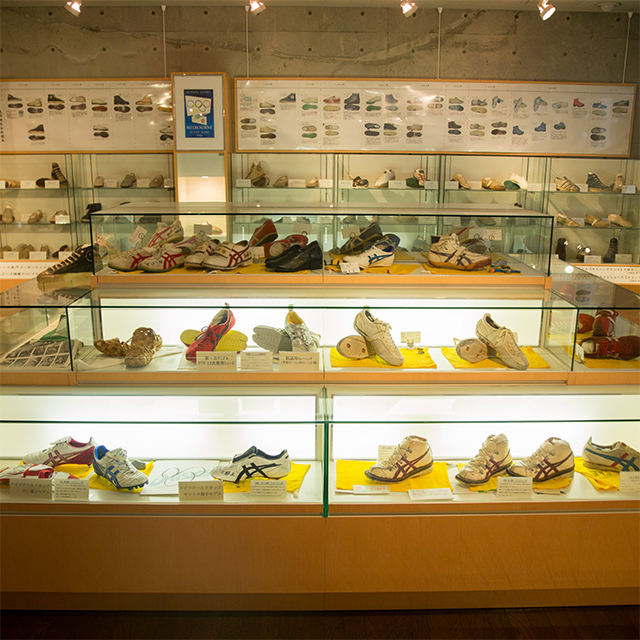 1960 - NIPPON 60 DELEGATION SHOE The Nippon 60 design was created for that summer's sporting events in Rome. With its striking rising sun logo, the Nippon 60, made a statement in its clean, unique design to make it one of the most iconic Onitsuka delegation shoe creations — despite the training shoe looks, it was created solely as a show of unity to represent the team effort that year. In a world where we consider branding a single statement for a company's lifespan, it's odd to think that a sporting brand like Onitsuka Tiger would willingly alter branding to coincide with significant events. 1964 - SPRING UP For anyone looking to understand the genesis of their favourite running shoe, 1964's Spring Up design offers a heavy hint of what would come later in the decade with the Corsair. The shape (with a heeled sole that would flatten out in subsequent Onitsuka Tiger creations), cushioning and use of a familiar colour combination on this training design was followed by 1966's Track Leather AA that's even more familiar in its classic looks. 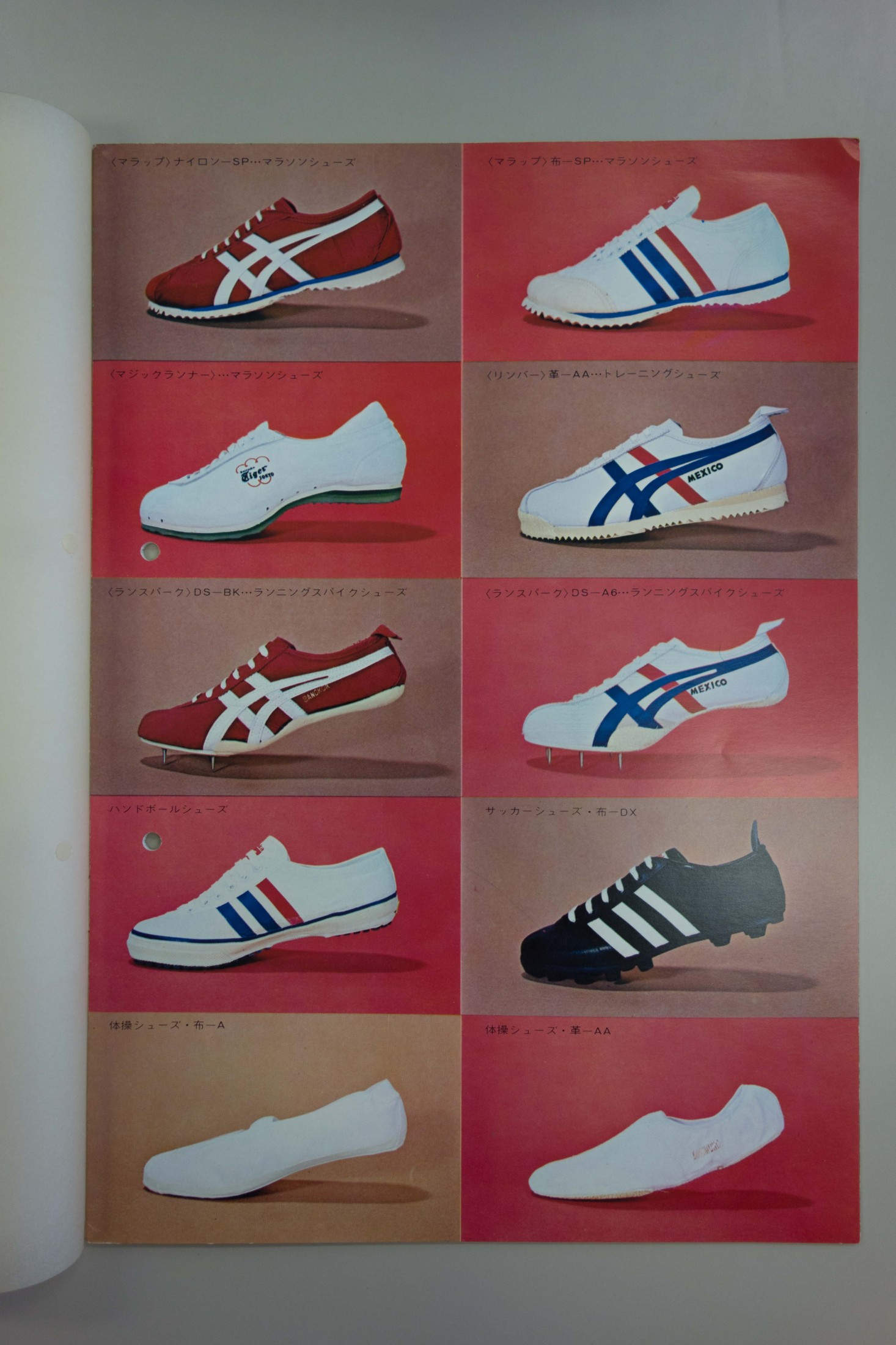 1966 - MEXICO This delegation shoe that could also be worn for warm up was created ahead of the sporting events in the summer of 1968. It's significant for debuting the ASICS Stripes, formerly called Mexico Lines — that familiar branding that links classic Onitsuka Tiger creations and modern ASICS performance pieces. A Mexico edition of the Limber Leather would create its own legacy — that shoe would inspire the Mexico 66 design that embodies this era of design. 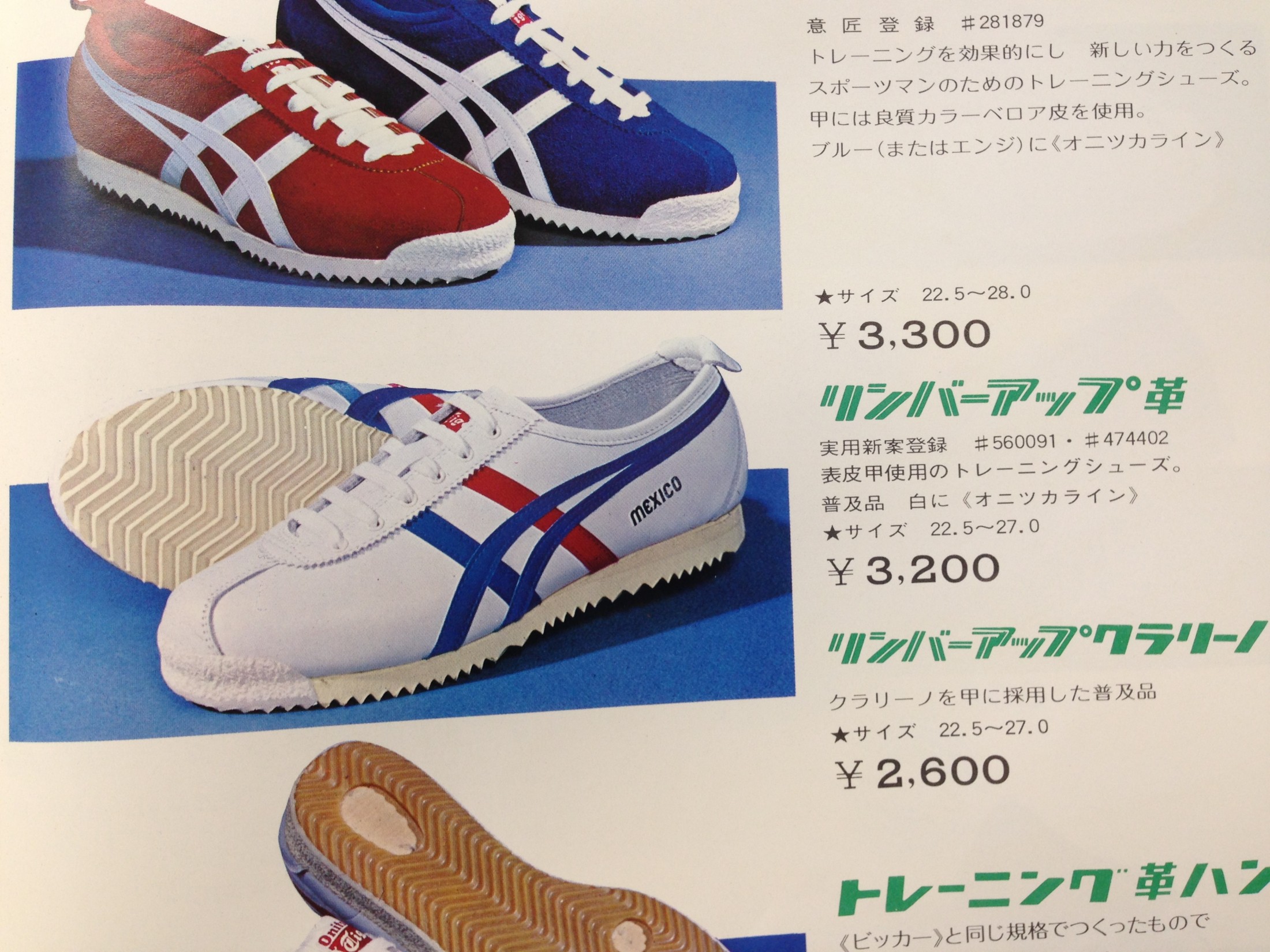 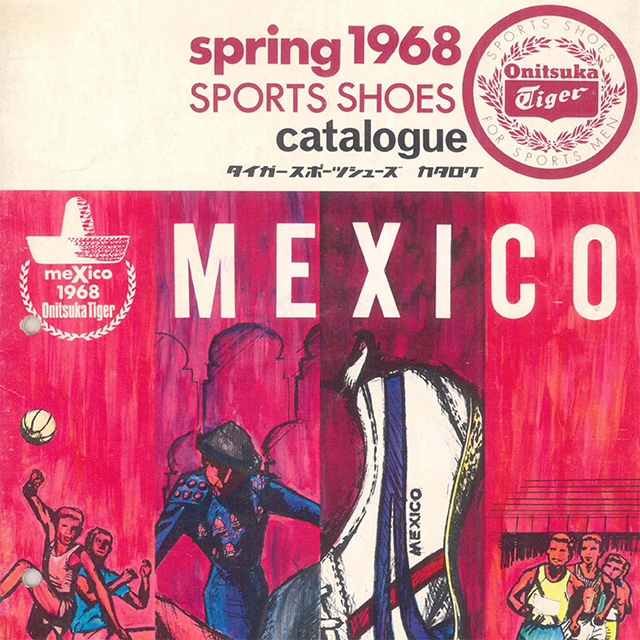 1966 - RUNSPARK SPIKE Before the Runspark, runners had to make do with what they got. Screw-in studs on a boot were commonplace, but adjustable spikes weren't. This design debuted four sets of spike lengths for different conditions that were entirely interchangeable. Competition in the marketplace when it came to spikes was as intense as it was between athletes on the track, but this innovation put Onitsuka Tiger in the lead in terms of technology. A 1969 'White Shoe Rule' would briefly ban coloured stripes on spike shoes in global events and Onitsuka Tiger would white out this bestseller accordingly. 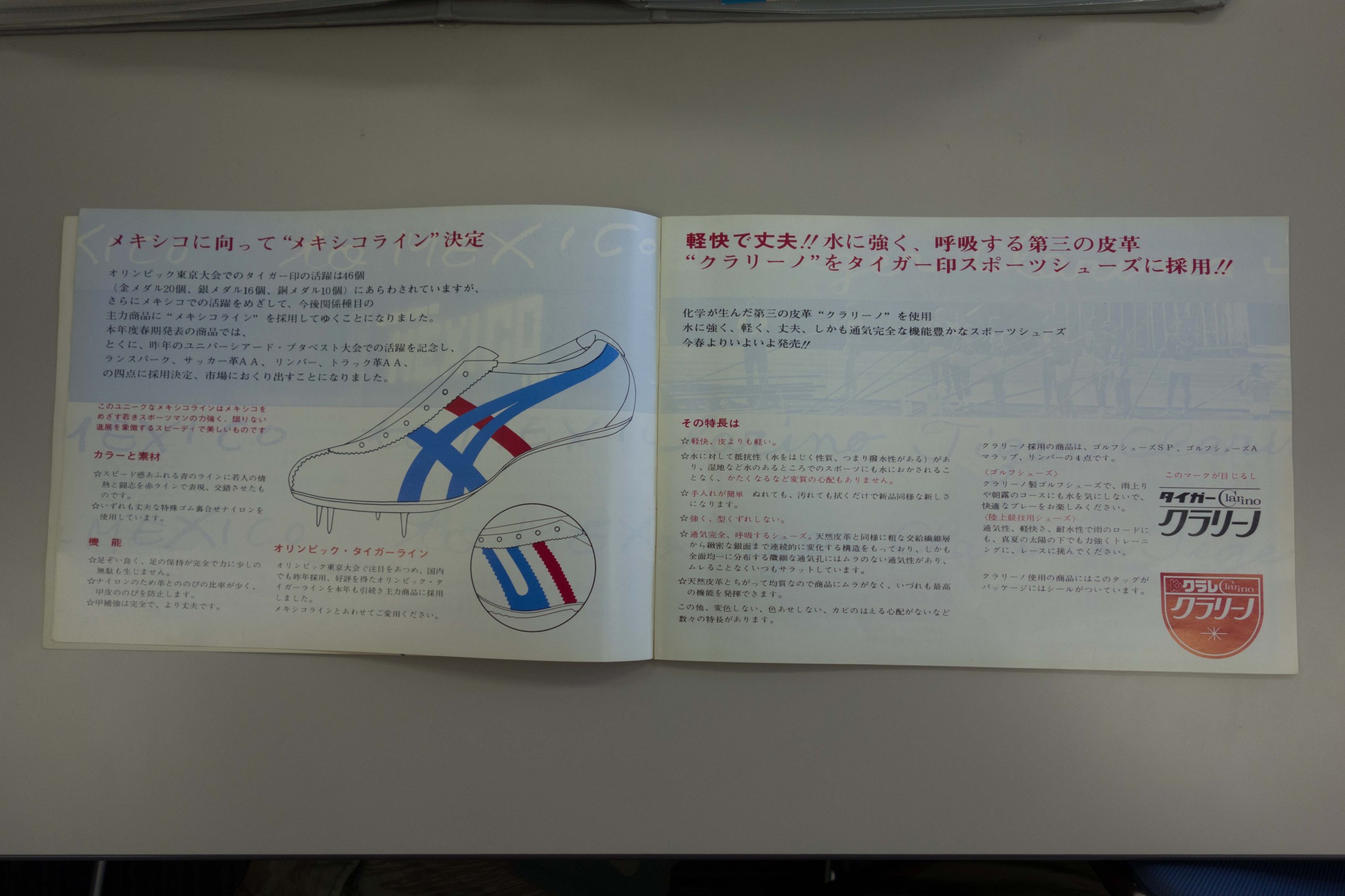 1967 MARUP NYLON The Marup would evolve in the decade that followed, with 1967's Marup Nylon bringing a lighter, synthetic upper to this silhouette. With prior running shoes being made from heavier natural materials, the industry embracing nylon would change finishing times. Partnered with the foam cushioned midsole, the new marathon formula would create blueprint for the running shoe as we know it. By the mid 1960s, the Marup was considered a classic in its field and this design (also known as Marathon) would spawn variants like the Tahoe, Boston and suede Bangkok. 1968 — CORSAIR The Corsair's resemblance to another classic design is no coincidence — this shoe (model T-24) went by another name on its 1968 debut and was created alongside legendary track coach Bill Bowerman. As an exponent of jogging, which was experiencing its first boom in the late 1960s, Bowerman was integral in providing ideas and insight for Onitsuka Tiger to bring performance to American surfaces. Taking into account that the road surfaces and body types of the intended audience would differ, the use of a sandwiched dual-density wedge of foam in the sole unit provided the extra protection. With a Marup style upper, this design would become a phenomenon. 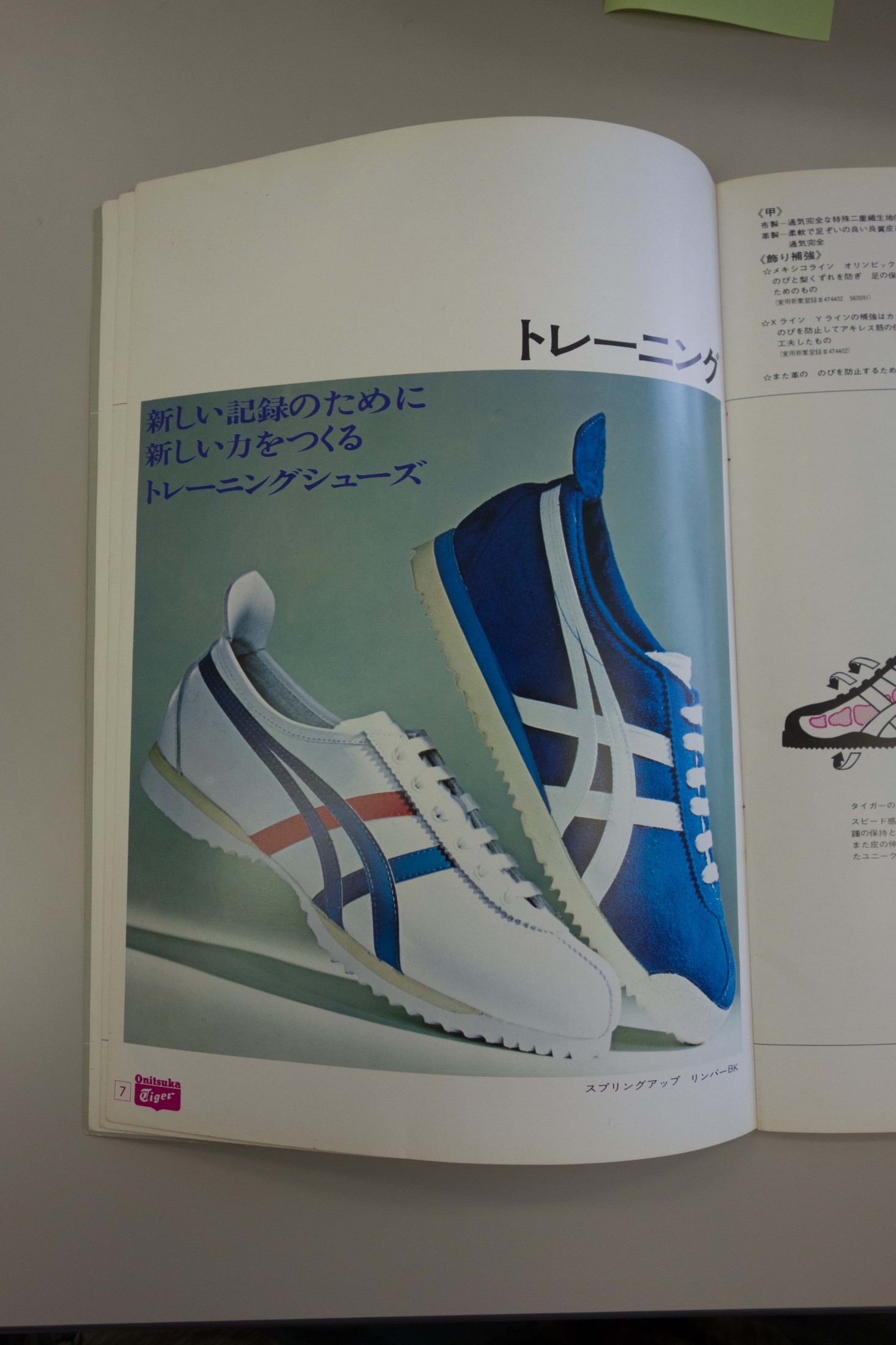