Reece Leung: Behind the Lens with BREAKS Magazine 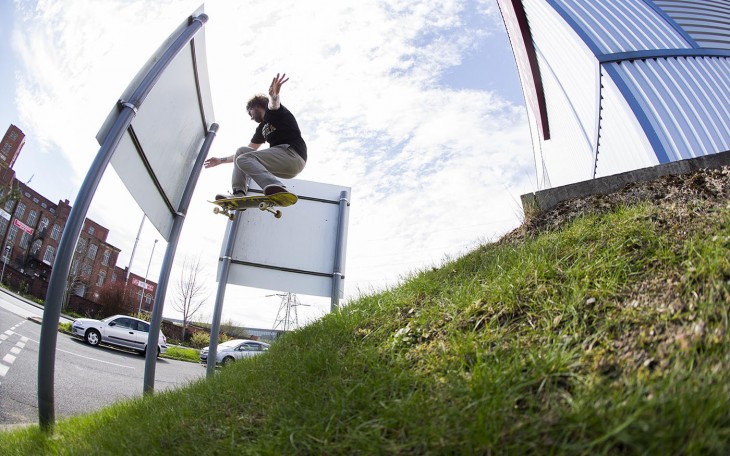 Our friends over at BREAKS Magazine have continued to run their 'Behind the Lens' feature letting skate photographers talk us through their favourite shots; you can see their feature with Reece Leung below. To me, the most fascinating thing about skate photography is the process that goes into capturing that one trick.  Sometimes this process can take ten minutes and sometimes it can take hours but what you tend to find is that behind every great photo there’s often an interesting story. This could be a trip to a particular location or something unique about the photo that you may not have noticed at first because the subject is what drew your initial attention. This series aims to look behind the lens, taking the focus off the skater, and allowing the photographer to talk about their work in their own words. It is with this in mind that we present to you the second instalment of our ‘Behind The Lens’ series, Mr Reece Leung: Ben Grove – Threaded Ollie / Dart Ollie – Manchester I’d previously seen Ben do this in the Manchester Scene video ‘Shads’. He said he hadn’t shot a photo of it and wanted to do it again so I decided to go through to Manchester. I don’t know why he wanted to try this again, it looked mental. I met up with Ben and we went to the spot, he was feeling pretty nervous as he didn’t want to do it again, last time he did it first go so he was hoping this would be the case this time. We got to the spot and this thing was horrible, it was higher than I thought and didn’t realise you have to gap about 6ft and then thread yourself between the signs. This was the first spot of the day so without any proper warm up Ben managed to somehow hype himself up to try it again. I got set up and then we were ready to go. He rolled up to it (still with his shades on) and tried it but the first few attempts he almost wrapped himself around the signs. This was worrying and it looked like it wasn’t going to be as easy as last time. It was obviously up to him if he wanted to carry on but he was keen. He had a few more run-ups then eventually popped a nice one and darted through the signs perfectly sticking it. We were both stoked and jumped back into the car where Joy Division and Happy Mondays played on the radio coincidently. This further hyped up Ben to try more mental stuff that day… 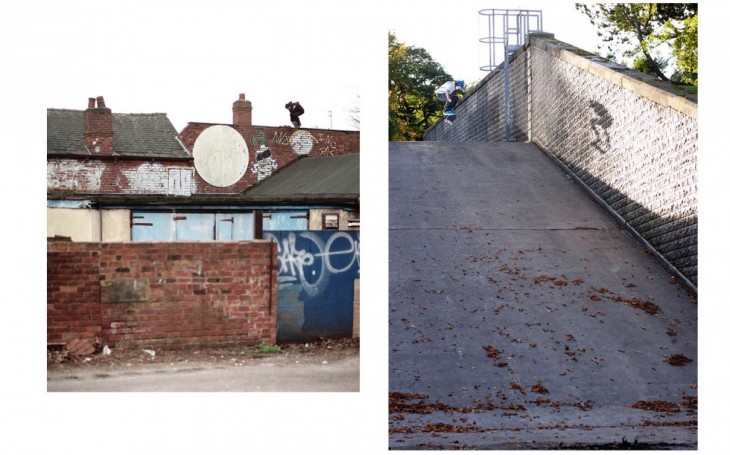 Sam Hutchinson ‘Blinky’ – Noseblunt Rag In – Leeds I’d skated this hidden roof bank spot in Leeds before and had a trick in mind for my friend Blinky to try. I told him about the spot which he’d never skated before so we decided to go check it out. The previous time I skated this spot we were told that the owner of the building just got out of prison and if he caught us skating it we’d be long gone. We chanced it anyway and went to the spot. It was a bit risky because we didn’t know whether the roof was safe enough to skate on and Blinky wanted to go off the wall into the bank. He checked it out and insisted it was fine. Blinky got on with it anyway and attempted the trick, managing to land it within a few tries. We were out of there pretty sharply. Luckily we didn’t have an encounter with the owner of the building and it was all good. 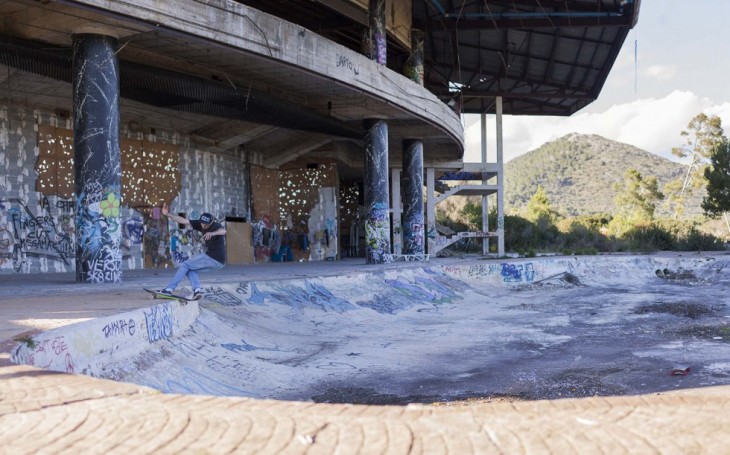 Dan Beall – Kickflip into bank – Sheffield I went through to Sheffield one day to meet up with Dan Beall and a few other Sheffield lads. He had a spot in mind he wanted to skate. He told me it was a drainage ditch spot which not many people have ventured to so we decided to hit it up. We drove quite a way out of Sheffield to get there and luckily it was a sunny day so it was likely to be dry enough to skate. We got there and had to trek a little while until we reached the spot. It was slightly wet but ok enough to skate. The spot was crazy, there was a few banks and then a huge one at the top of the spot. Dan eyed up the big bank and managed to get this kickflip into it. I was pretty stoked on this photo because the light casts a nice shadow on the wall of Dan’s kickflip. 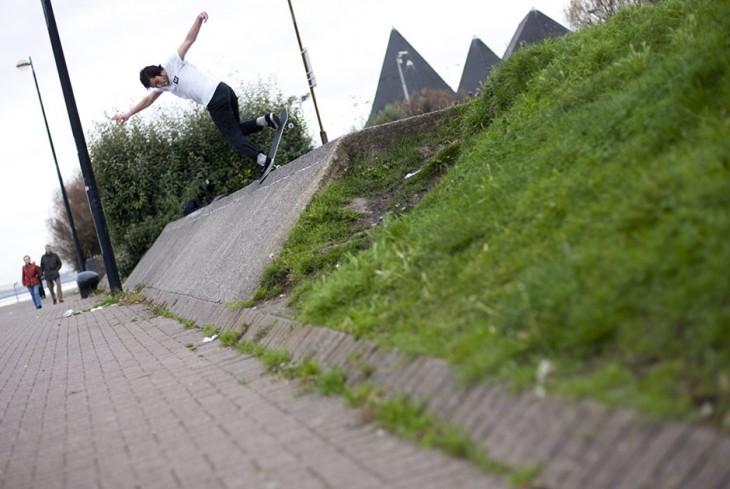 Harry Lintell – Wallie into bank – Leeds Another day during the winter we went to this crusty spot in Leeds. This isn’t in the nicest areas of Leeds either but there was a big group of us so it was fine. We were approached by a car handing out business cards which said ‘Mr Whatever-U-Need’…Grammes to Ounces, Deliveries & Deals’. I think every time I’ve been here someone have been offered something dodgy by a local scally. Anyway Harry tried to skate this spot a bit differently and he got this wallie out of the side of the bollard and into the barely ridable bank. 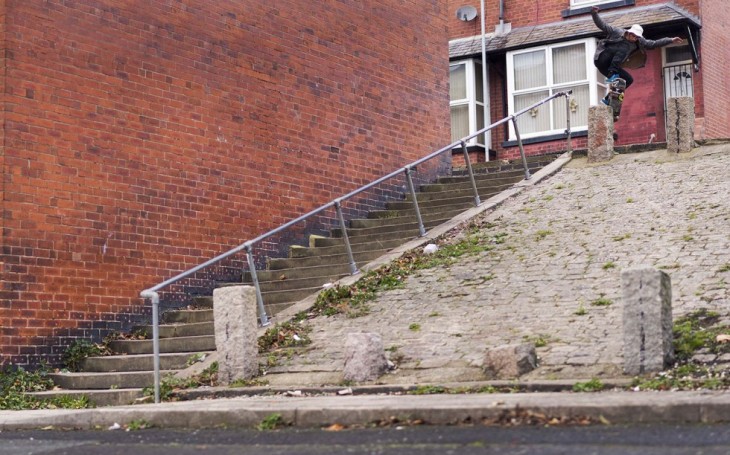 Jerome Campbell – Ollie – Mallorca It was our last day of the Mallorca trip. Jerome and I decided to skate some spots close to the place we were staying at. He’d eyed up this spot which was near to the local bar where we went for drinks in the evenings. I’d not even noticed this spot and as soon as I saw it I knew it would make a good photo. It was a thin air vent nearly two floors high and it didn’t look the most stable of objects. The air vent led to a fence which Jerome wanted to ollie over. He stepped on it to test it out and you could see the vent almost denting in, he looked unbalanced even walking along it. He attempted to roll along it and you could see it was hard to get the balance right when he was popping the ollie. He didn’t think he could get used to it but he battled with it and eventually got an ollie over it with some spanish locals applauding him. This was the last spot of the trip and it probably produced the best photo from the week. 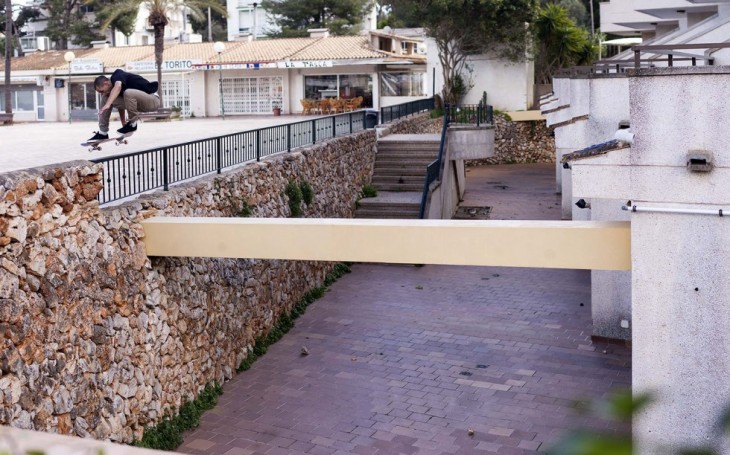 Head over here to see the rest of their feature. [Source: BREAKS]