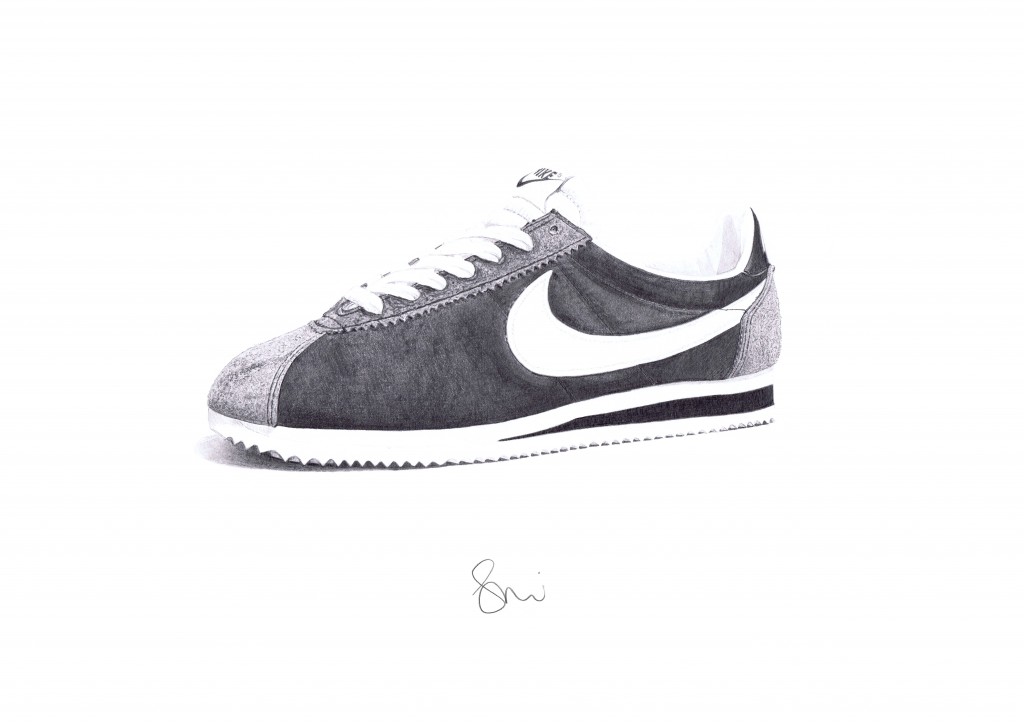 A little under a year ago, Manchester-based artist Steph Morris transferred her creativity of pencil-drawn portraits to accommodate her love of footwear. Initially taking a leap of faith from her usual subject matter, Steph’s work was instantly well-received with her social media following, and so the journey began. Previous working on detailed portraits featuring the likes of Kayne West, the Queen as well as a 6 x 4ft representation of a Great White shark, her transition to footwear has been an easy one to say the least with a mix of clean lines and subtle shading throughout. Since the start, her gaze has been upon both popular silhouettes such as the New Balance x Sneaker Freaker 998 ‘Tassie Devil’ and ASICS Gel Lyte III, as well as her personal favourites such as the Nike Cortez, showcasing her skills with a pencil that can be easily described as unparalleled, thanks to her perfect sense of composition, tone and colour. 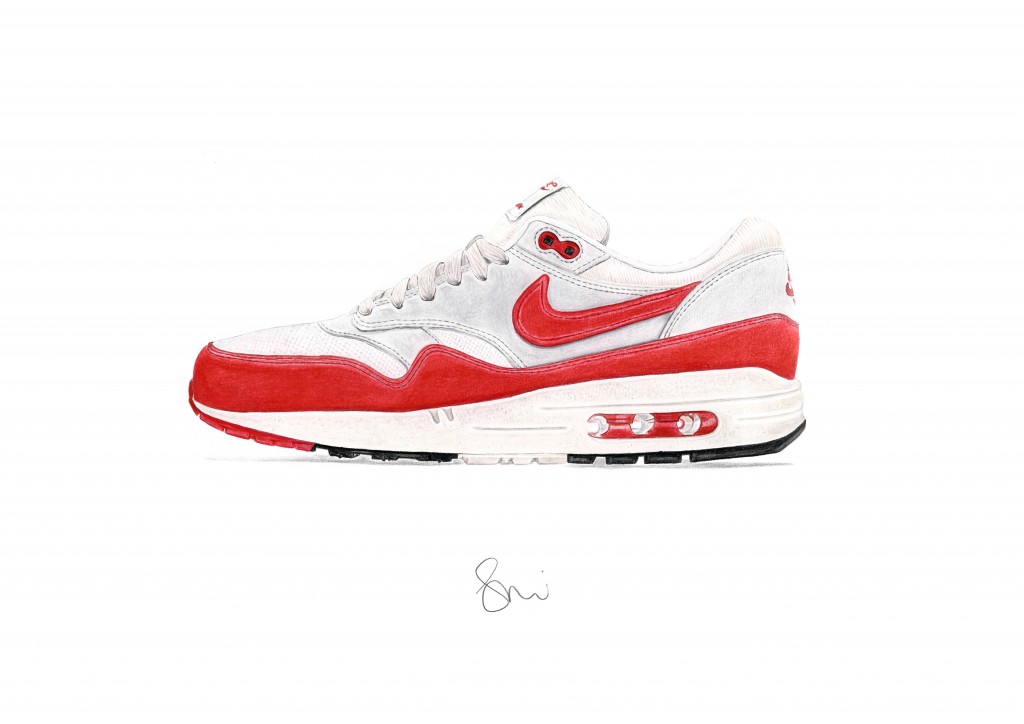 We recently sat down with Steph to get an insight of how she works, her daily processes and how it all starte size? - Who are you? Steph - Stephanie Morris, but call me Steph. I’m a freelance Illustrator based in Manchester. How did your love affair with footwear start? I bought myself a pair of Reebok Classics when I started secondary school. All my mates were buying magazines and CD’s but I used to save up until I could buy the next pair. My parents used to moan at me all the time asking why I could need so many pairs – but nothing could beat the feeling of new sneaks on my feet. 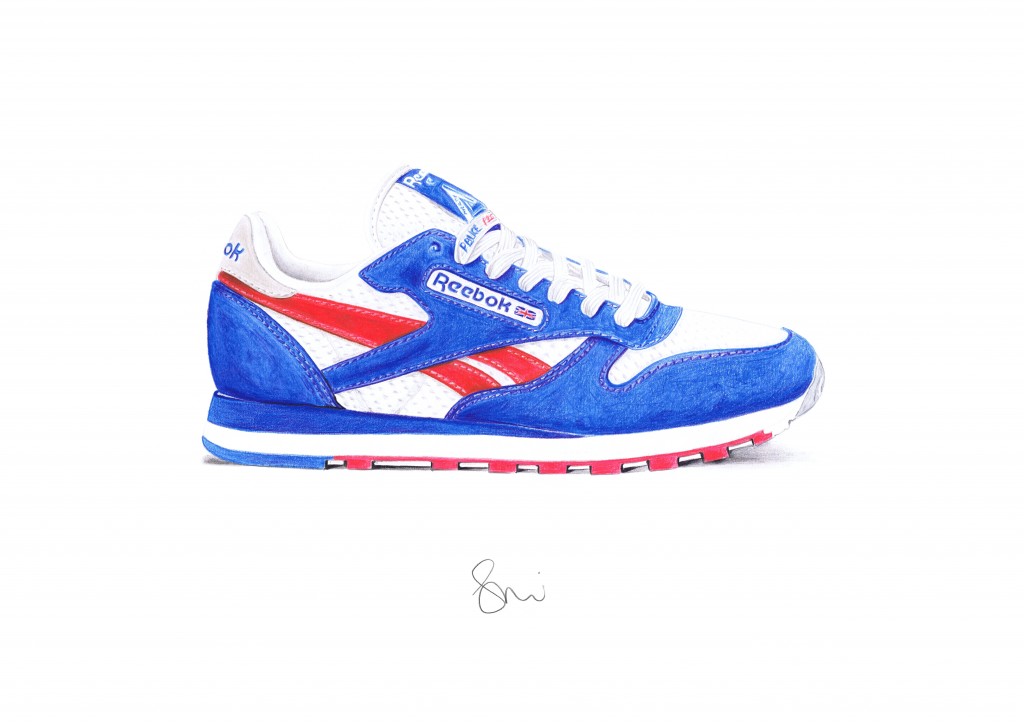 What inspired you to put pen/pencil to paper? Being an avid trainer fan, I initially started drawing them for myself as I thought they would look good on my bedroom wall. I drew the first ever one - Nike Cortez, put it on Instagram and loads of people liked it. I got a lot of positive feedback and people started requesting I do more which has pretty much led me to where I am now. What challenges do you face when creating a piece? Definitely time and concentration. People often forget that each piece takes around 15-20 hours in total to complete. It’s often straining spending so much time giving 100% concentration to a piece of paper. But I’ve learnt to control this through proper planning and being as organised as I can. I always listen to music or have a film on in the background when I draw – it stops me getting distracted. I’ll often have a coffee break if I’m feeling like I need to stretch my legs, but it’s straight back to it, no mucking around. With so many artists creating footwear-inspired art nowadays, what do you do to differentiate yourself? To be honest I had no idea that footwear-inspired art was as big as it is when I started. I never saw a certain piece of art and thought  ‘I could do that’ – it was literally an accident. My style has always been highly detailed hand illustrations, something that I’ve been practicing for years. I see a lot of footwear related artwork on Instagram these days copying the likes of The Limebath and SY Illustrations (who are killing it I must add). It’s a shame that so many other people’s work is being reproduced by your average Joe Bloggs. Luckily my style keeps me away from all of that as my only tool is a pencil – I make sure that does the talking. 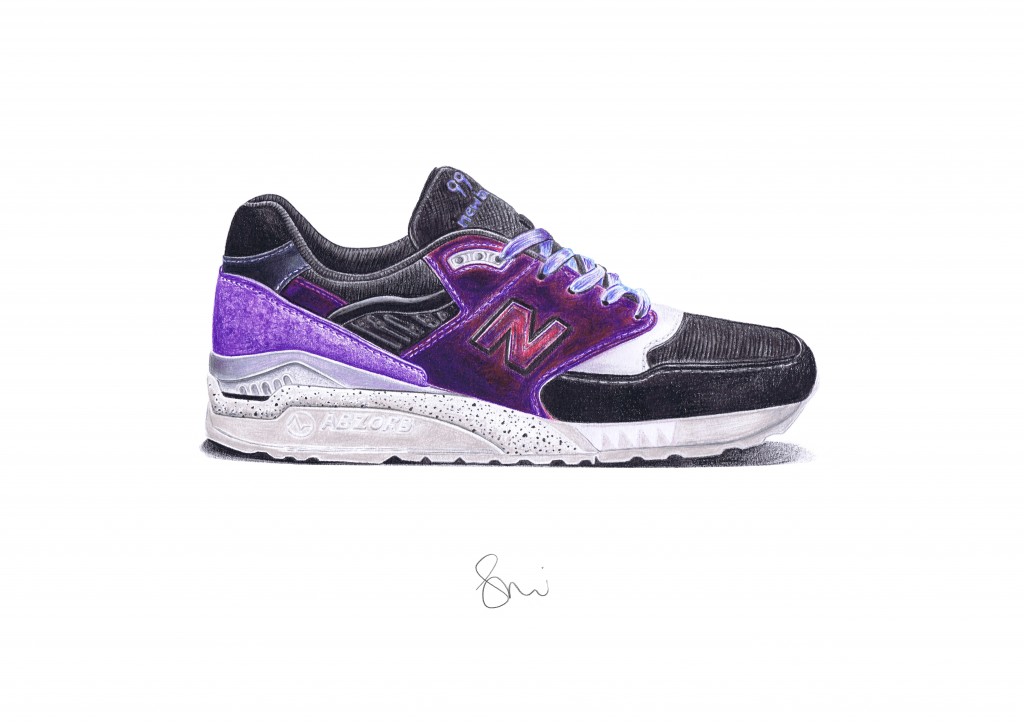 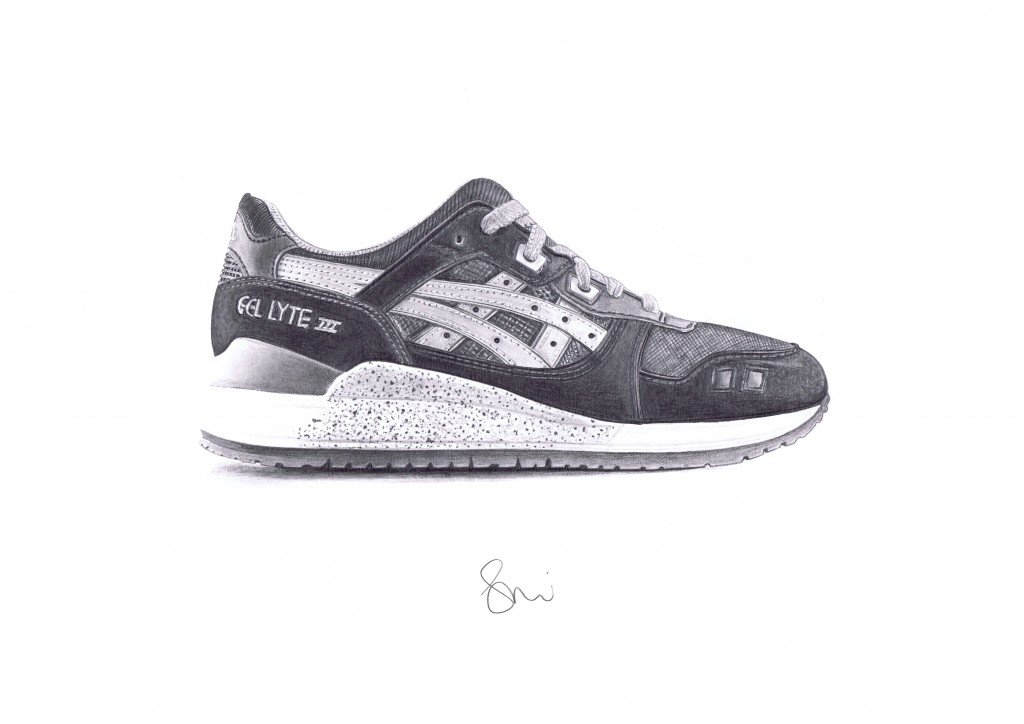 You’ve been working hard to get to where you are now, what obstacles have you come to in the process? It’s been tough and I’ve had a lot of knock-backs  I was never the best in Uni – I actually nearly dropped out at one point. Without sounding too much like a sob story, I got caught up in the rat race and lost sight of what I wanted in life, which was to draw and buy nice shoes. After a kick up the arse from myself and so much support from my family and friends, I got my head down and kept my goal in mind. Success is a journey, not a destination. Apart from that, it’s the usual juggling part-time work and getting everything done on time. Have you got anything planned for the future that you can share with us? I have a lot of things I want to do in terms of work and getting myself out there. I will be attending Crepe City later this year to sell some work and have some cool collaborations lined up too. I am exhibiting some work in August this year in London but would love to hold a solo exhibition in the not too far distant future. As for now I’m putting together some ideas for new work which I’m really excited about. Is there a shoe that you have difficulty with? There’s not necessarily a shoe but more drawing certain details of them that can sometimes be a challenge. Drawing laces is a lot harder than it sounds. I’ve spent hours and hours defining stitching and drove myself insane. Drawing laces is probably my least favourite thing to do. But it’s really cool seeing it all come together and when I’ve finally finished, the amount of work I’ve put in finally becomes worth it. What’s your favourite shoe at all time? Hard one! But I’d have to say the Cortez. I absolutely love the shoe and think stylistically it is the most simple yet best looking around. 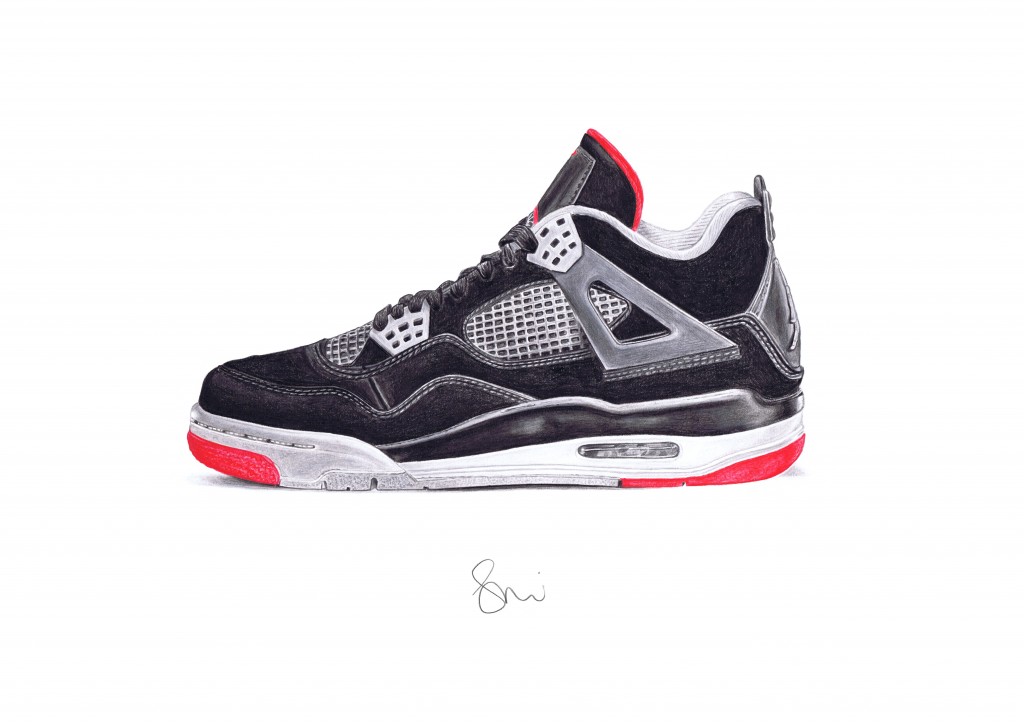 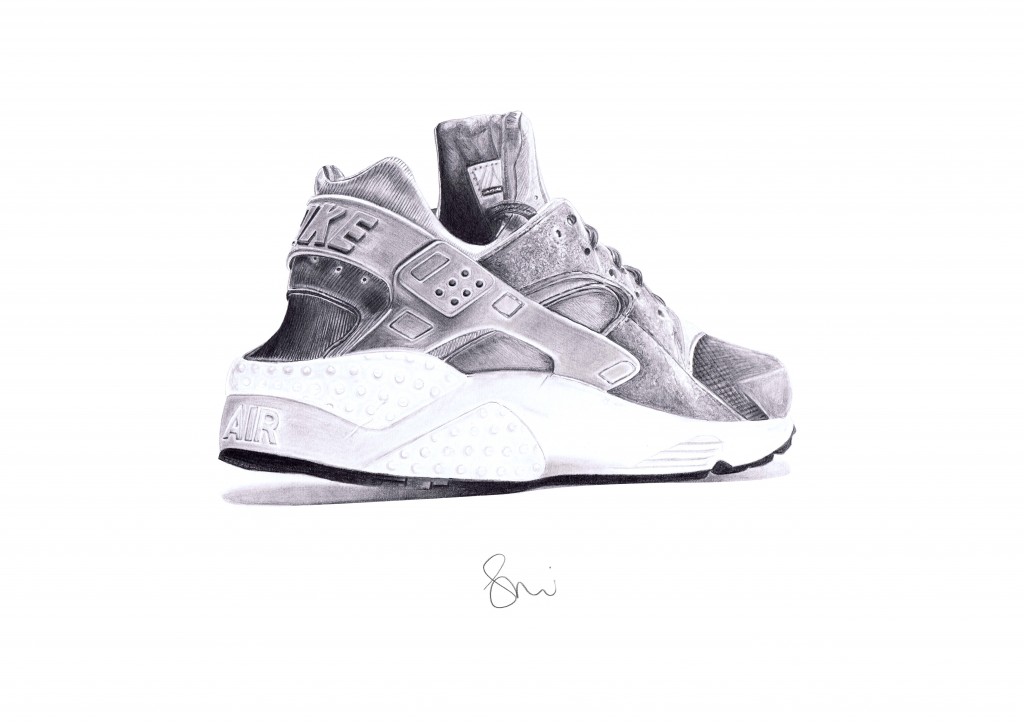