The Hundreds tells the real story behind the Publish Jogger Pant™ 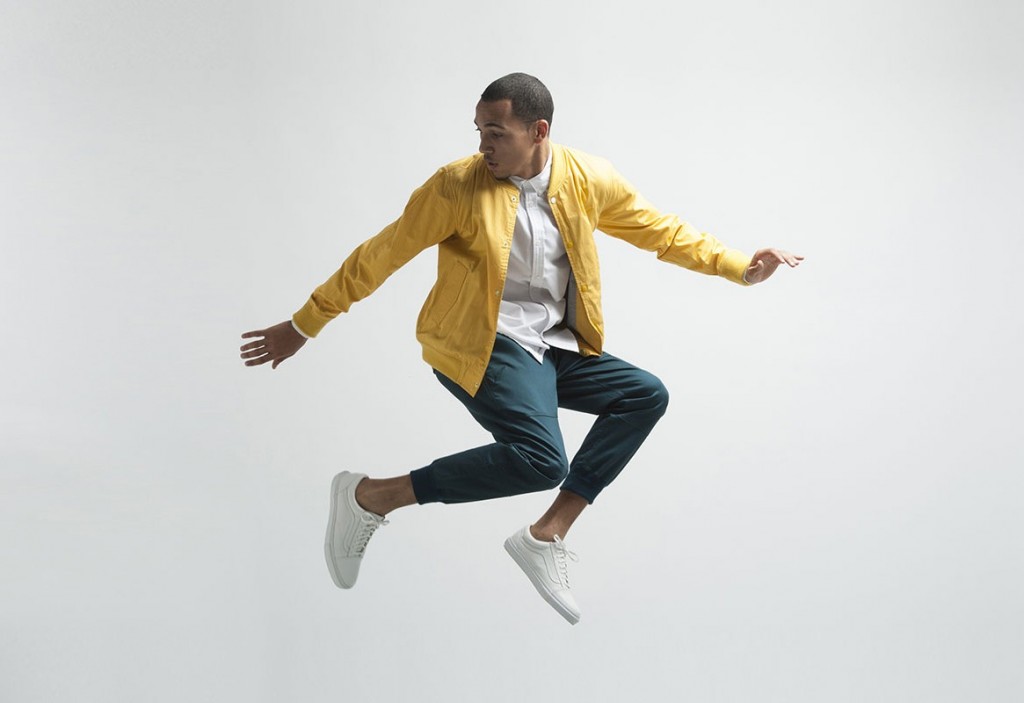 With so many brands nowadays trying to create something new, be the first to showcase their latest collection, utilising social media to their full advantage, its sometimes very hard to find the source of a growing popular trend, or let alone a single piece. The Jogger Pant is a good example. Although joggers have been around for years, a style of pant that has been created as what is essentially a clinched chino, it was Publish that trademarked the term, and to find out the origins The Hundreds and Hypebeast reporter Luis Ruano sat down with, Michael Huynh, owner and creative director at Publish Brand to get the true story behind the Jogger Pant™. 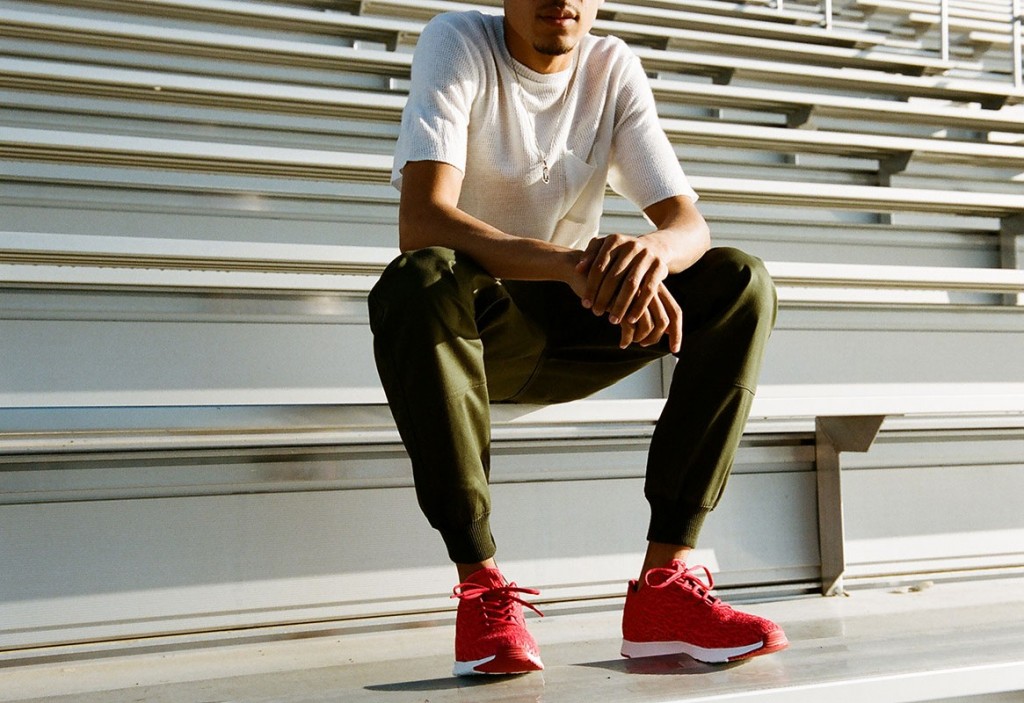 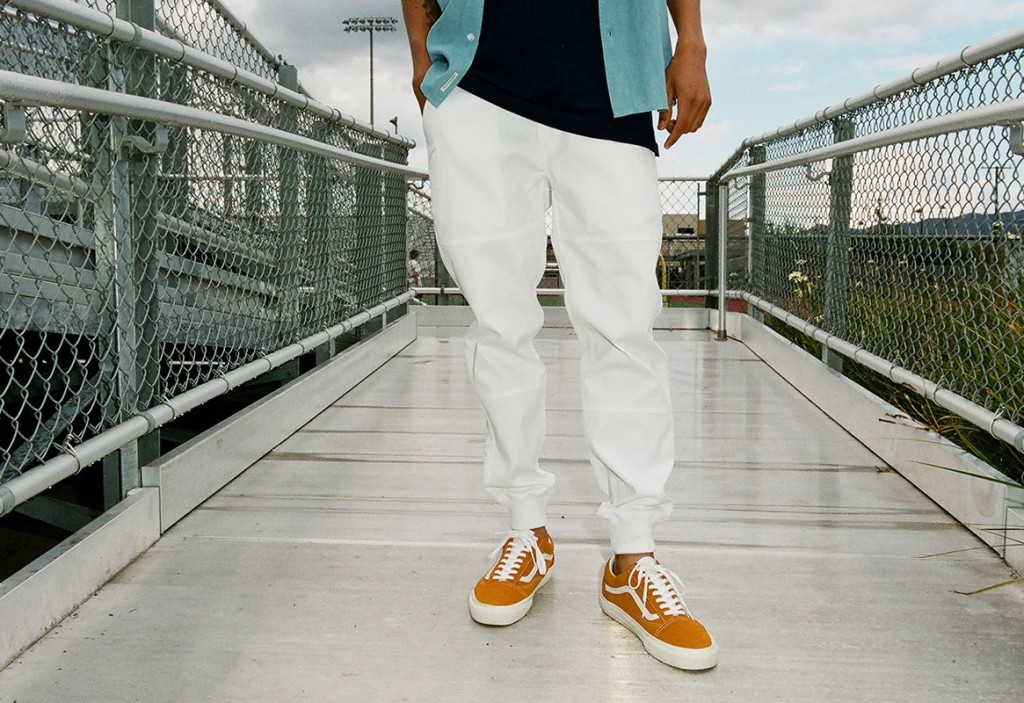 Luis - How did the idea for the Jogger Pant come about? How did you even predict that it would do as well as its done? Michael - Alex James, a culture savvy and long time friend of mine had came to down to visit my office/studio to chop up design and what was going to be included in our first collection. Him and I talk culture a lot and so we bounce around ideas all the time. That day Alex James had worn a really dope pair of sweat pants – I believe they were by Marc Jacobs – and he was like, “Mike, you gotta do a silhouette like this!” and I was like, “James, sweat pants though? Do you know how many there are out there?” and he’s like, “Yea, you just gotta flip it and make it yours. A sweat pant… there’s not enough dope sweat pants out there. Either they’re very droopy, very big, very baggy or very slim.” This was the perfect fit. I’m like, “OK, cool. But we have to make it distinctively unique.” So we re-designed that Marc Jacobs pair of pants in a fleece material. It was like a comfortable, brushed fleece material. Little did we know what was going to happen, catapulted our brand completely… in ways we did not imagined. We had sent it off overseas to get done in black, heather, maroon, and navy. Four colorways. What year was this? This was like 4 ½, almost 5 years ago, when we first started the brand. So like back in ’09? Yea, back in ’09. Like July of ’09. My factory misinterpreted the tech pack and made a big mistake. Instead of sampling in fleece they sampled in stretch twill. And when they came back I was like, “What the hell!” But then we sat back and were like, wait a minute, there’s something here! There’s something very, very unique here! We couldn’t really distinguish what it was, but there was something there. With men, we only have x amounts of silhouettes that we can wear. We can wear: shorts, denim, chinos, swim trunks, etc. You don’t see a typical jogger type pant in twill. So the idea stuck with us and we were like, “Dang, this is f****n’ sick!, let’s roll with this.” I was sure the rest of the world wasn’t gonna get it, so we rolled it out slowly to see where it went from there. 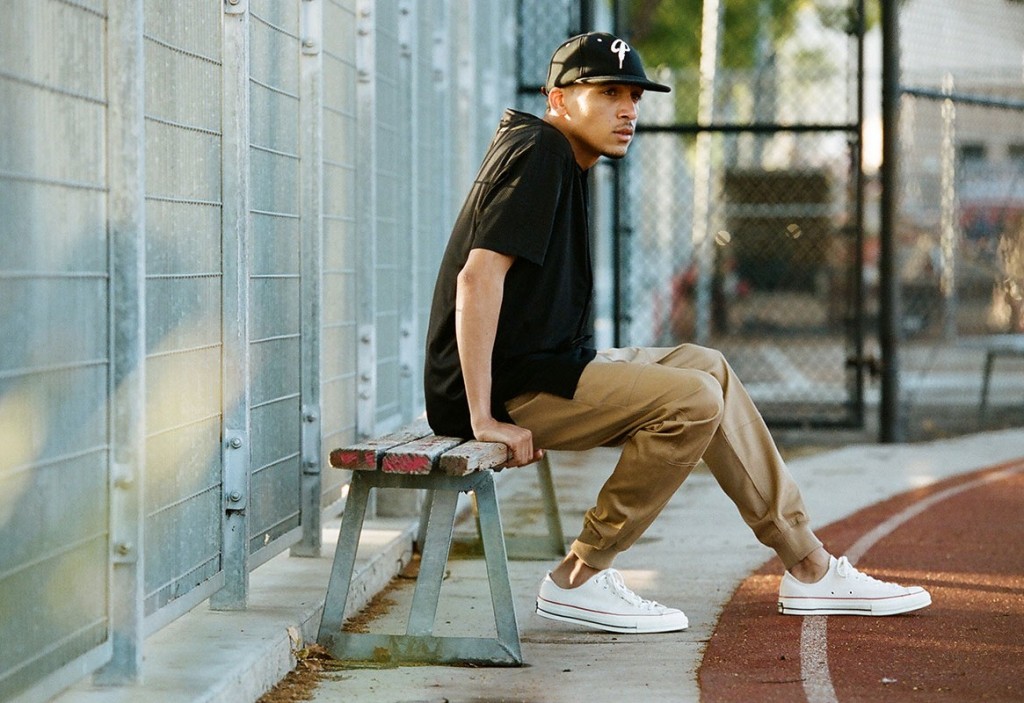 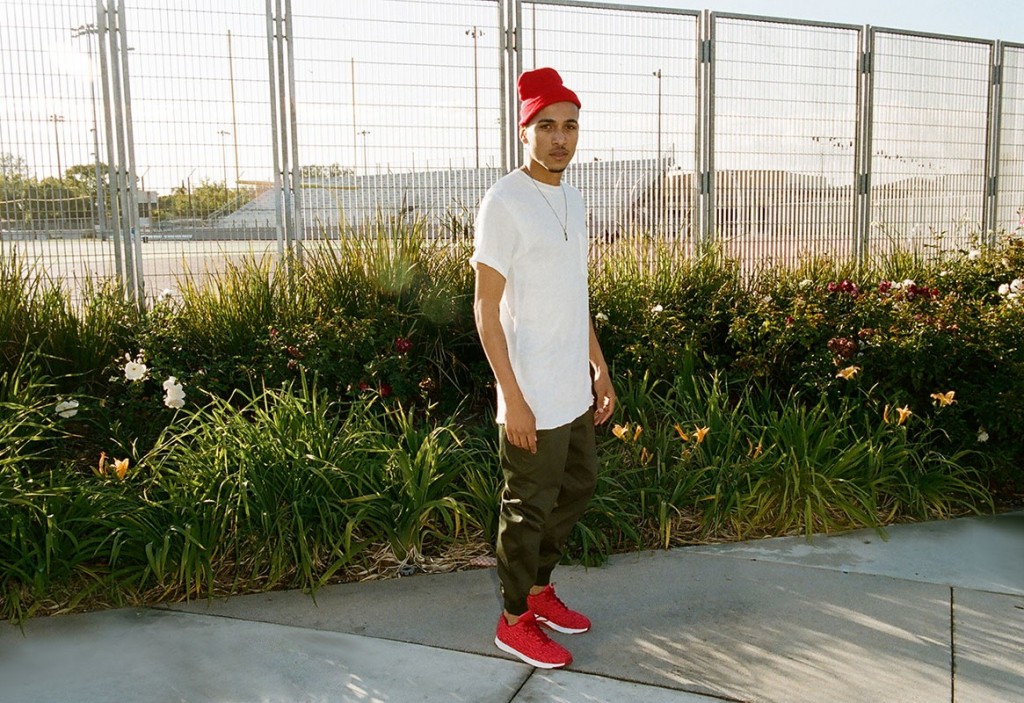 How did you do with that initial drop? The first season sold and we got like 20, 30, 40 units ordered on these pants and it was such a failure. We knew we shouldn’t have done it, you know? The lucky part is that I have a factory that’s able to produce really small units, so we said, “Let’s just go with it.” A lot of my fashion-forward accounts understood it. A lot of the guys still on the streetwear tip were really iffy about it and it didn’t do too well, so I took it back. I was like alright, something has to change here. We have to portray this new style in a light where more people will understand it. It had to be done through visuals. So we came up with multiple photo campaigns where the jogger pants could be easily understood. We hired an extremely good-looking black guy, walking down La Brea… shopping. He’s wearing a black jogger pant with Concords and a black shirt pushing a baby stroller, holding his hot wife’s hand. This was intentional. We wanted to portray that a guy as masculine as him can pull something like this off, right? Had he been by himself walking down La Brea wearing something like this, people would either deem him gay or very, very fashion-forward. It would not translate to a general consumer. But he’s pushing a stroller and holding his hot wife’s hand… there’s no way this guy is deemed gay. He’s very, very fashionable. Now, if you’re a person on the street and see him wearing Concords and you like Concords, that’s automatically a conversation starter. And the fact that it looks good with the jogger pants and he’s wearing it, its almost like “if he’s pulling that outfit off, I can pull that outfit off as well too”. We started training people on what [the jogger pant] looked like on Huaraches, Stan Smiths, all various types of shoes that were current. We employed that in the first catalog. We went out and did sales again and people started getting a little bit more and more of it. Sales had jumped up crazy, left and right, so we’re like, “There’s something here that we can expand on.” So we just kept on marketing. I’ll be honest, I did not see what would be the outcome of the jogger pant today. I did not see that. I just knew that there should be more silhouettes offered to men, but the thing is, we can only pull off certain outfits in certain fits. I thought this would be a new thing that guys can go to. Staying fit it hot, looking dapper was something all guys should evolve to, you know what I mean? People are maturing, guys are maturing, kids are maturing. When we believe in something, we stick with it, through thick and thin. We stand by it. We push it. We educate. I think a lot of the time people may not understand something because of lack of knowledge, but if you educate them and you show them that this can be an everyday, casual item and not just something that’s super fashion-forward, people will adapt to it. So, that’s what happened. That’s the origin of what we call the jogger pant. 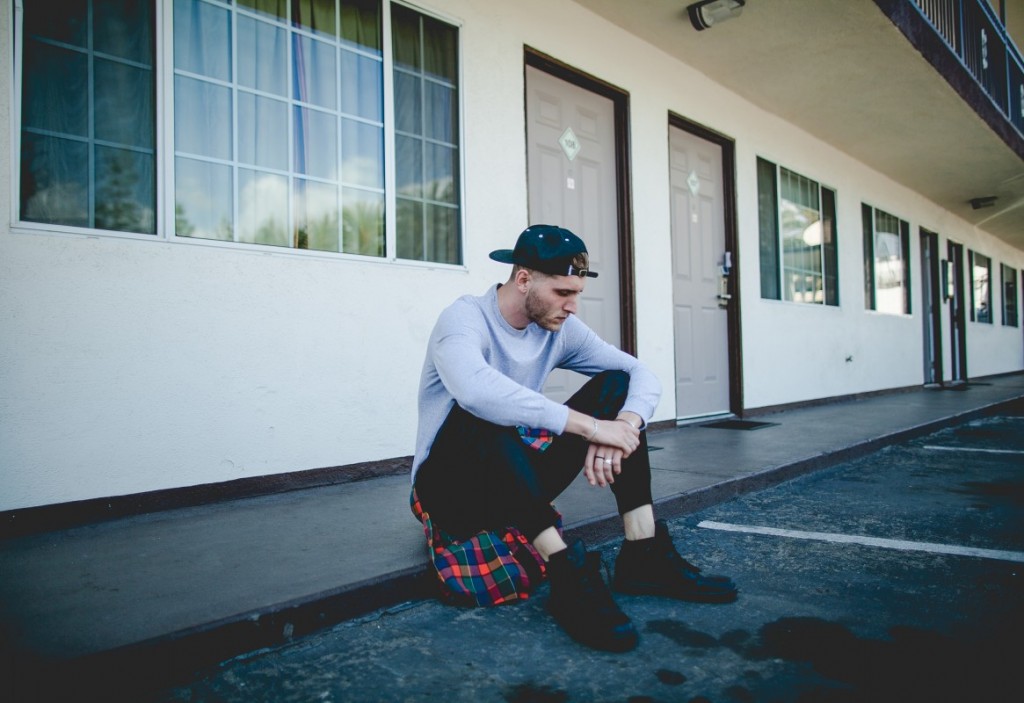 So, at that time, there was no one, at least in streetwear, with anything remotely close, or similar? I know that a lot of European brands were on [the] whole drop-crotch pants. You know, those droopy… what we call the diaper bag pants. That was really hot at the time, and the silhouette can come off looking as if the bottom hem of the pant looks cinched, but its actually straight legged. So, there were some similarities there. We took the idea of the comfortness of it and applied the whole cinched cuff to it. In our realm, what we call casual-contemporary, no one was doing it at the time. It was a hard push because no one understood it. Mind you, it came off of the whole chino roll up, when everyone was doing it. Everyone was rolling up their pants at the time, so… it was like a unique alternative to that. 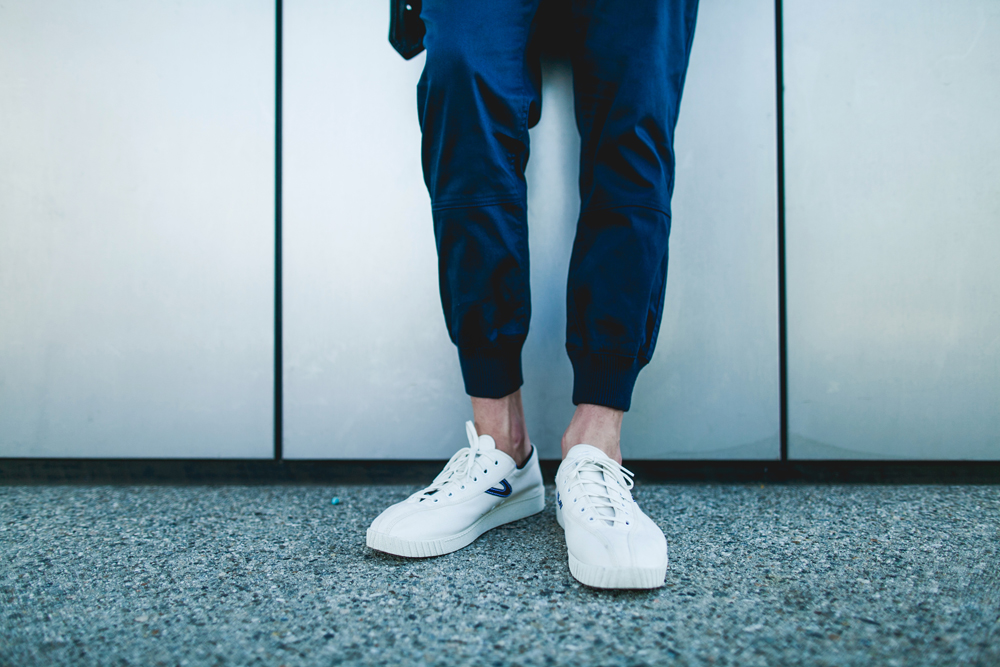 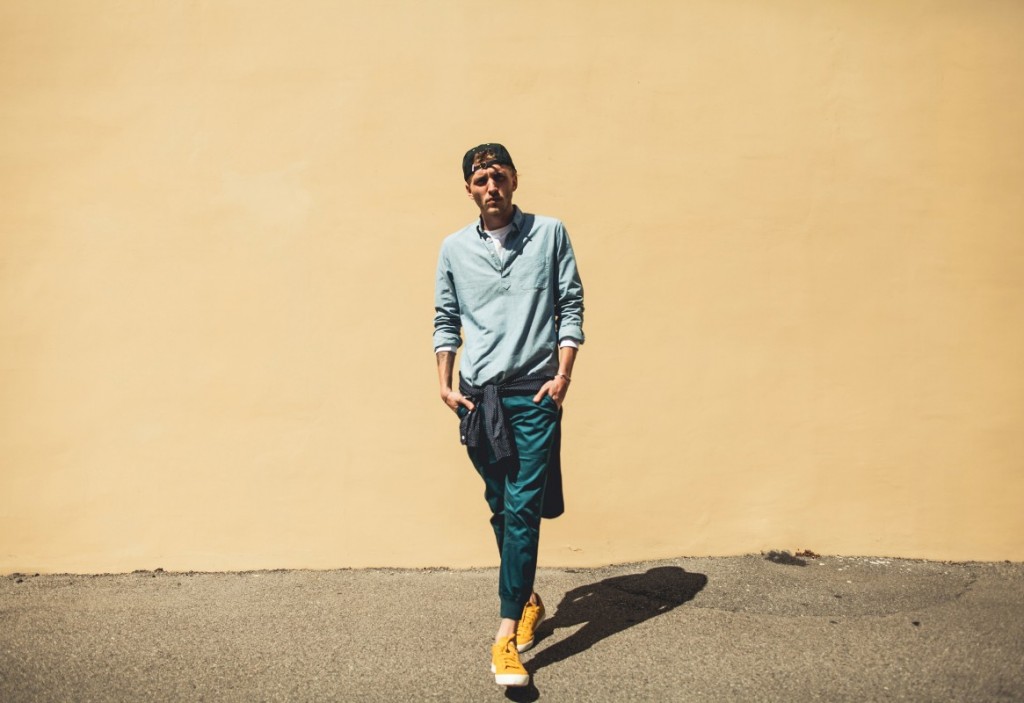 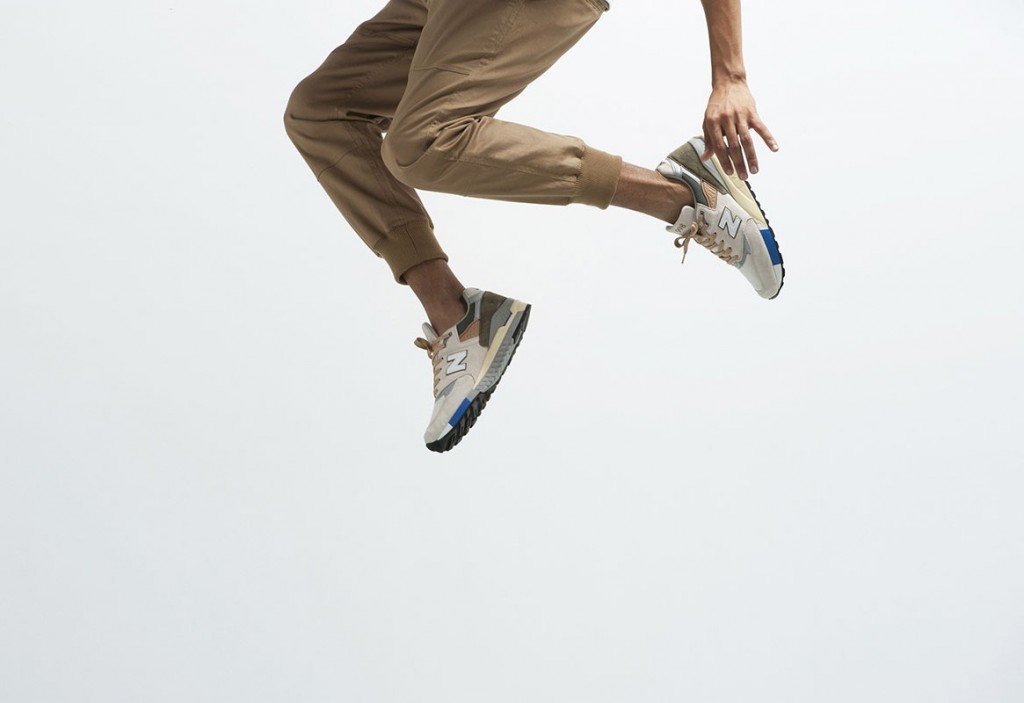 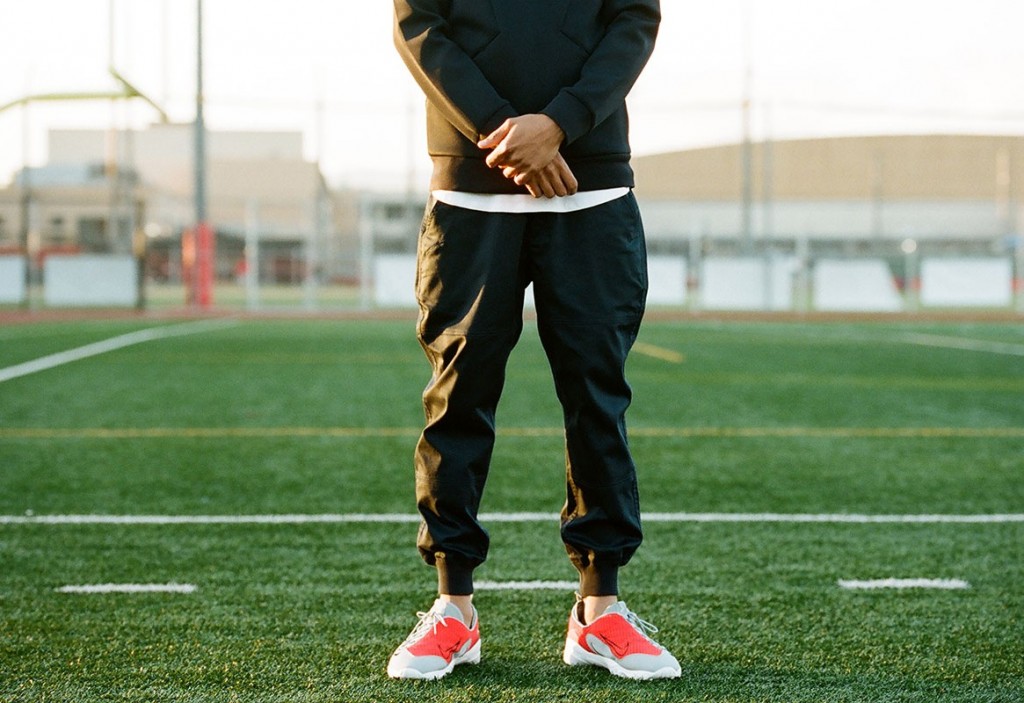 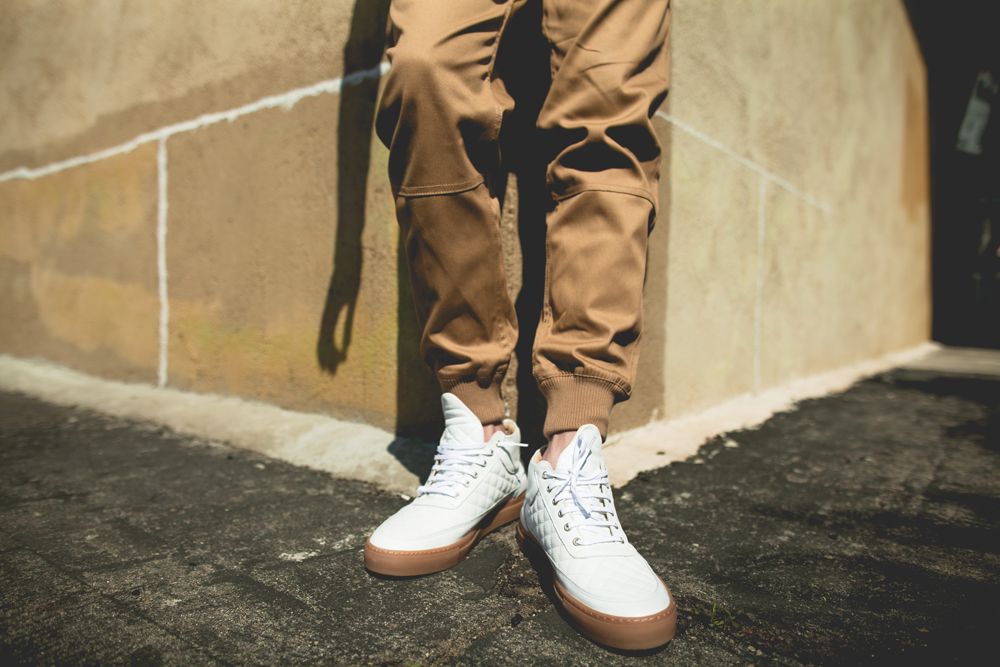