The PUMA State… Professor B interview 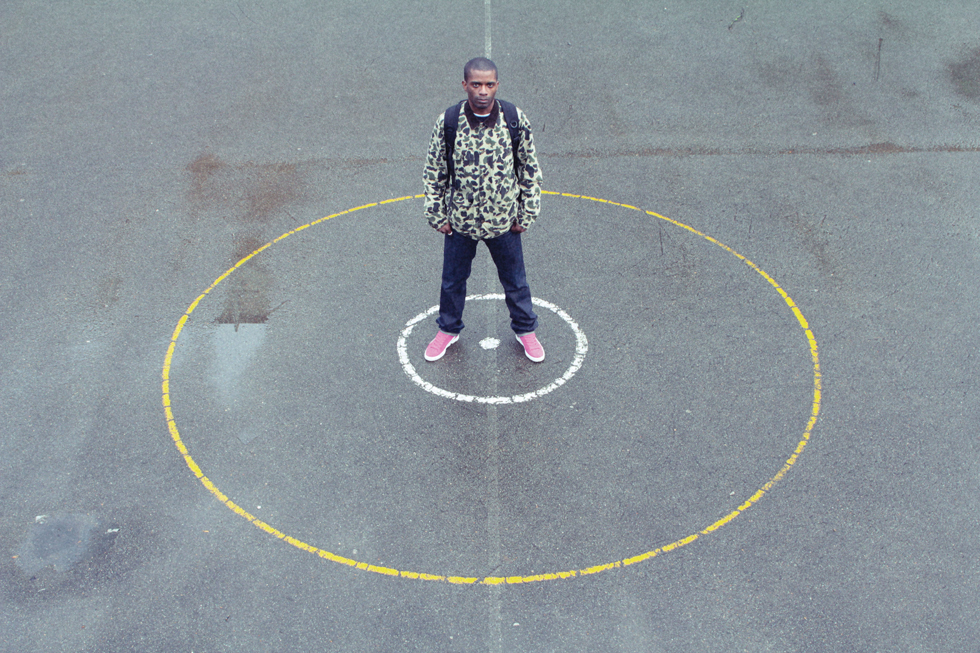 Normski caught up with Forever Fresh contributor Professor B to talk about the PUMA States ahead of their upcoming re-release this Friday, 14th March… Normski: Please introduce yourself… Professor B: I’m Professor B also known as Prof B, but sometimes just B. My parents call me James. I’m a CAD designer, I‘ve done various design roles, sales roles and such but in my spare time; I’m one fourth of ‘Forever Fresh’. How long have you been into all of this design stuff? I got my degree in 2004, since then I’ve done model making, product design, interior design, furniture design and graphic design. I’m seriously impressed! So, we’re in South-East London around Heygate Estate - are you from around here? Yeah, I’m from South-East London, not specifically from Heygate but I know this area well. It’s going to be knocked down in the coming years and you can see it’s been taken over for graffiti, which is obviously a big part of the UK hiphop culture. What or who is ‘Forever Fresh’? ‘Forever Fresh’ is a collection of four members, there’s obviously myself and Martin, Emil and Steven. It initially started as an online archive of PUMA trainers and since then we’ve done various events to help PUMA with new releases - we see ourselves as number one stock for PUMA news, past present and future. How did ‘Forever Fresh’ come about? We’re all friends and members from Crooked Tongues  which is a sneaker resource and forum. Since we all had a collection of PUMA’s we thought why not collaborate and document them? We were able to share certain details and information with each other and create one resource and since then it’s got bigger and bigger really! What’s your first memory of PUMA? I guess since the early 90’s really. I was quite young so I wasn’t necessarily involved with the scene at the time. But when films like ‘Beat Street’ came out and the b-boys were rocking their States and their Suede’s, it helped propel PUMA into what it is now. When did you get your first pair of PUMA’s? I got my first pair of PUMA States about 5 years ago and they’re an original pair from 1991. They’re worn but I managed to clean them up. My actual first PUMA’s were several years before that which I can’t recall. What colour? Navy and white, one of the original colours. 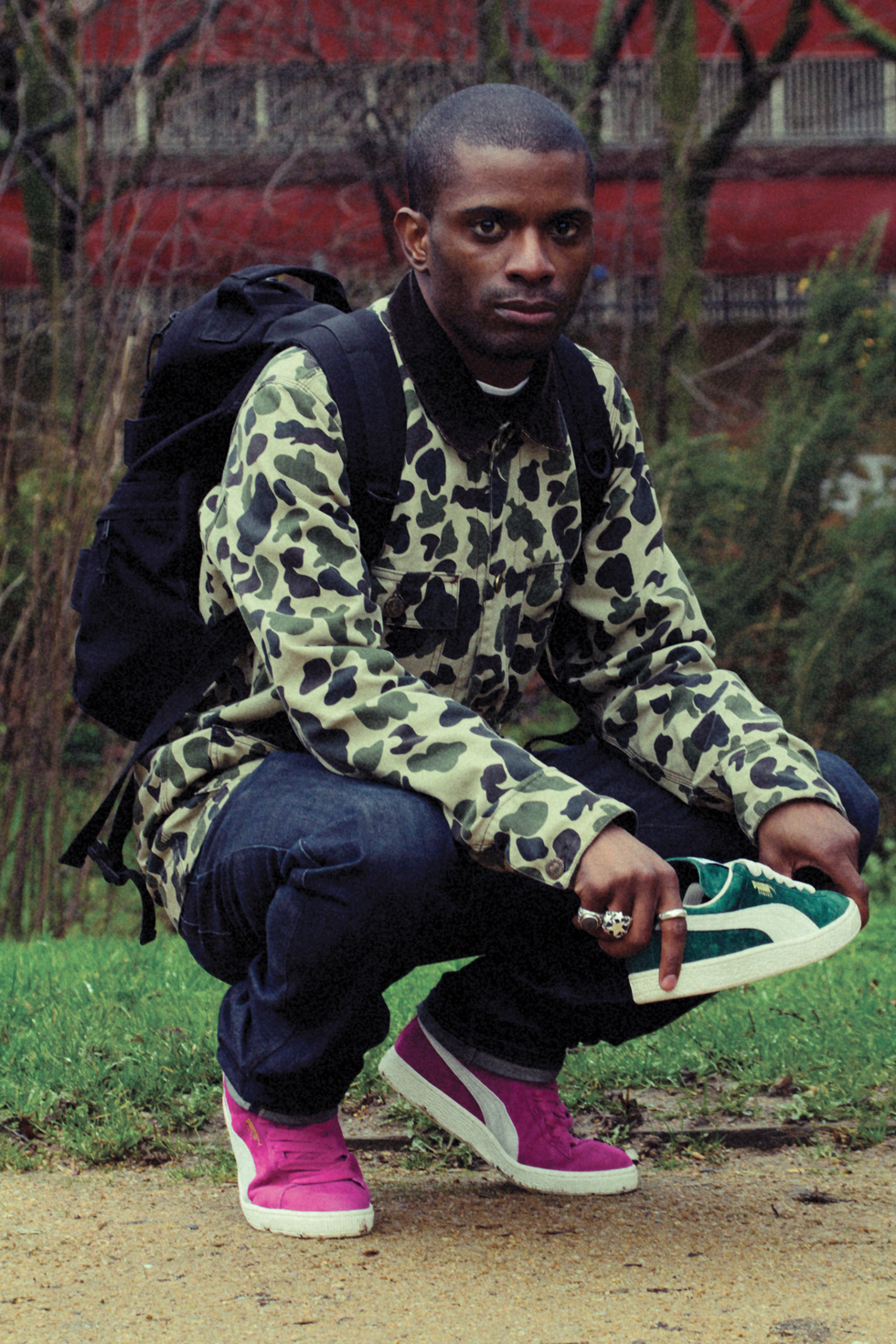 What would you have been wearing with your PUMA’s in those days? Nothing special in particular; baggy jeans, a hooded jumper and anything b-boys were probably wearing: PUMA’s, Kangol hats etc. How precious are you about your trainers? I try to keep them fresh as long as possible, but I’m not precious to the point that I won’t let them get dirty. At the end of the day, they’re meant to be worn. Any tips on keeping them clean? Suede brush and toothbrush for the sole. But always be prepared with an extra set of laces and I personally try to stay away from any liquids on the suede. How many pairs have you got? Probably 100-120 and I’ve probably sold another 30 odd as I’m trying to keep to quality as oppose to quantity now. Only three or four of these are doubles. How and where do you store you shoes? Anywhere I can find: wardrobes, sheds, stacked up and under the bed! How did you start collecting PUMA? It wasn’t intentional. I bought a pair that I liked, then I saw more that I liked, then I saw more and more that I liked and eventually I thought I might as well go back and look at older and original pairs. It literally kicked off from there. What’s your favourite pair of PUMA’s ever and why? My OG Yugoslavian Suede’s are probably my most precious because they’re the oldest, about 35 years old. But my favourite pair is probably a pair of navy and white Suede’s from the mid-90s. The shape and form is probably the best that PUMA have made. Why are you such a fan of PUMA? I like simple things done well, and PUMA shoes; whether it’s the States, Suede’s or Clyde’s are simple things done well! With all of the colourways, you can match them up to anything that you’d want to wear. How do you go about your design work outside of PUMA - is that also simple and clean? Probably, I’m quite technical in my design work, precise lines and forms so it probably does tie in with PUMAs shoes. What does sneaker culture mean to you and how does it go hand in hand with street culture? I guess people that are part of the street culture will take care of their appearance and a lot of that will start from the trainers. If they’re going to take pride in appearance, they’re going to take pride in what they’re wearing on their feet. 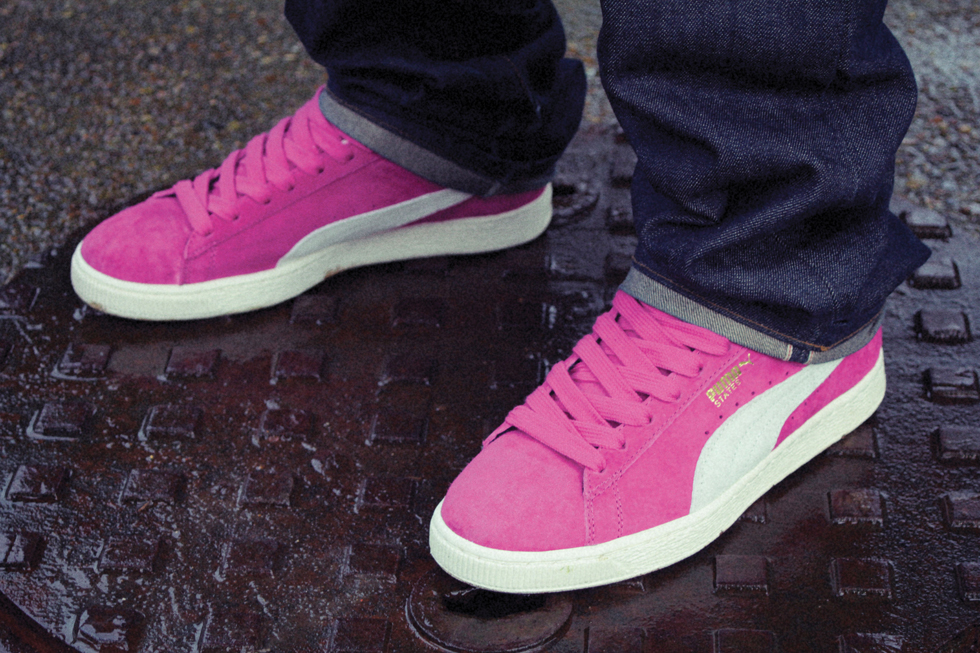 What’s your music taste? Definitely hip-hop! New York’s probably quite a big influence with the b-boys which obviously goes hand in hand; especially when a lot of them use to wear PUMA’s to break dance. What does it mean to be seen wearing PUMA’s back then compared to today? I guess back then to get a pair of PUMA’s wasn’t as easy; you couldn’t go down the high street and find a shop that sells them. So you’d have to put in a lot more effort to find a certain colourway or get them from America. Now it’s much more open and there’s more variation and choice. The PUMA States were imports but how do you think the UK put their stamp on it? At the time PUMA’s weren’t that available in the UK so when they did start to import from America they were nicknamed the ‘States’. The UK has a part to play in why they came about. As well as the hip-hop culture there’s also a big street culture and terrace culture in the UK, which adopted the PUMA States and so naturally, it became a PUMA lifestyle. What is it about the PUMA States that makes them so popular? I think because they weren’t out a long period of time. The Suede’s have been done over and over again but the States were only made in certain colourways and I haven’t really seen people in the UK wearing them as much, as they’re not a general release shoe that you could just go and purchase. Why should other sneakerheads or PUMA fans be excited about the re-issue of the States? For the fact that they haven’t been seen for a long period of time as a general release is a great sign. The PUMA States have such a history behind them; the reason they came about, how they influenced hip-hop and made PUMA what it is today. Anytime an original shoe gets reproduced, it’s something all sneakerheads should appreciate. What other styles would you like to see re-released? Recently we’ve seen a lot of 90’s runners, so I’d like to see the PUMA Mirage or the PUMA Duplex. One that a lot of people have been asking for is the PUMA Dallas with the D-Ring eyelets…this also became quite important to the UK’s sneaker culture. Thin or fat laces? Personally I prefer thin. The fat laces definitely have their place, but for me sometimes if they’re too fat they take away from the shoe and hide certain aspects, which thin just don’t do. The PUMA States in red/white, forrest/white and navy/white will be launching on Friday 14th March online at 8.00am GMT via direct links on our Facebook, Twitter and a dedicated e-mail newsletter. It will also be available in all size? stores on the day (from their respective opening hours) priced at £60. 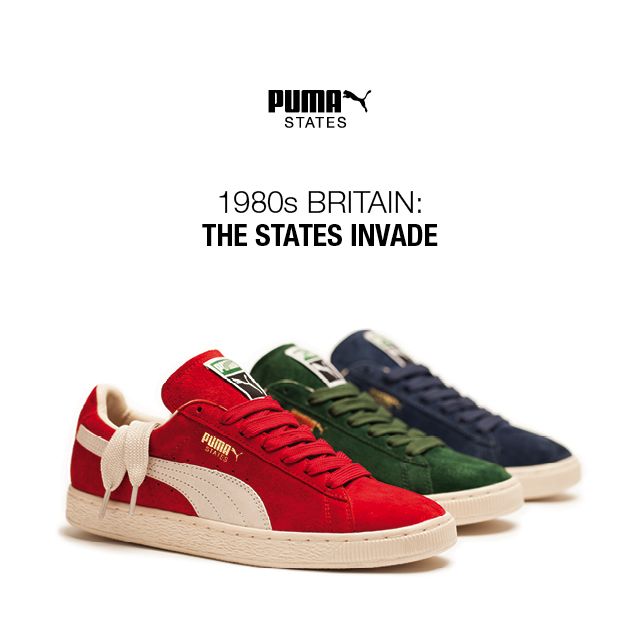