Kareem Abdul-Jabbar was born in New York City in 1947. A complete natural to basketball, Abdul-Jabbar had a dominant high school record and was soon signed up to play for college team UCLA. He played for them between 1966-69, winning three NCAA titles as well as three National College Player of the Year awards. With such outstanding potential it wasn’t long before he was playing his basketball in the NBA. Abdul-Jabbar signed for the Milwaukee Bucks in 1969, and it was no coincidence that a NBA Championship shortly followed in ‘71 with him in the team. It was also whilst playing in this golden era for the Bucks that he showcased to the world his signature shot - the legendary ‘Skyhook’. His trademark move was unstoppable and enabled him to smash all existing NBA scoring records. Many still see the ‘Skyhook’ as one of the most feared weapon in basketball history. After spending six seasons with the Bucks he was traded to the LA Lakers with whom he had 14 successful seasons until he retired in 1989. In his time there he formed a partnership with another NBA great Magic Johnson and together they proved a formidable force as Abdul-Jabbar went on to win another five NBA titles. Kareem Abdul-Jabbar remains NBA’s all-time leading scorer with 38,387 points and became the first NBA player to play for an amazing 20 seasons. Amongst various other records he also played the most All Star games with 18 appearances and won most MVP’s with 6 awards. Now as part of the adidas Originals Select Collection, size? is re-releasing the Jabbar Mid and Lo. One of the very first signature sports shoes, both feature a leather upper, suede toecap along with the classic Jabbar signature graphic on the tongue just as the original pair he wore in the 1971 season. The Jabbar Mid and Lo – size? UK exclusive will be launching on Friday 14th March online at 8.00am GMT via direct links on our Facebook, Twitter and a dedicated e-mail newsletter. It will also be available in all size? stores on the day (from their respective opening hours) priced at £80 for the Mid and £70 for the Lo. 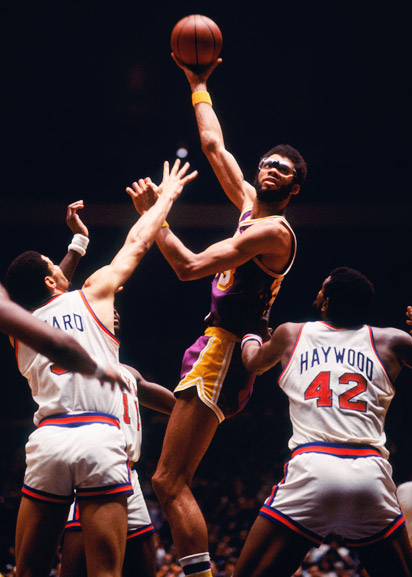