Equipment: The best of adidas by Gary Warnett 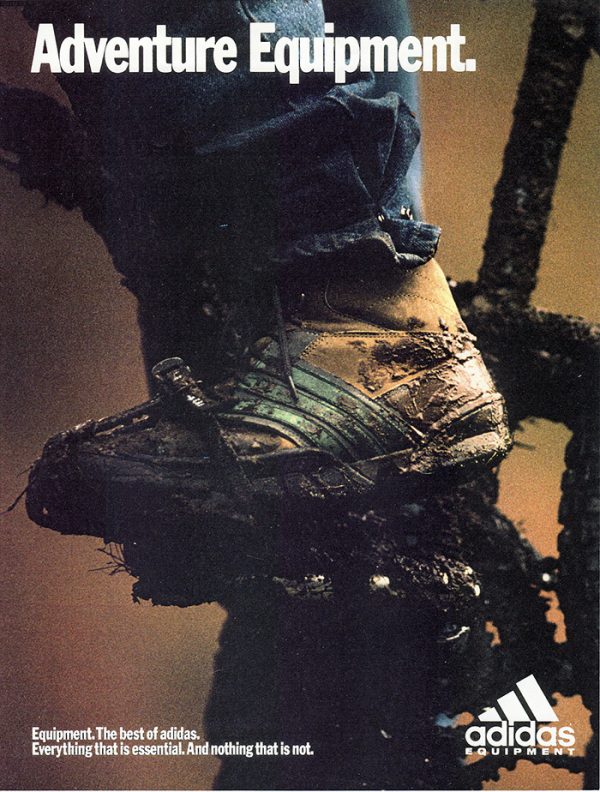 The adidas Equipment line has long been a preoccupation of mine because there seems to be so many stories behind the whole collection. I remember the bags and sweatshirts being popular around my way (and Common wearing the sweat when he was Common Sense) after adidas seemed to be solely discussed in old school terms. Over time I appreciate the shoes as pieces of industrial design, but it’s a collection that brings arch-rival brands Nike and adidas together like never before. Peter Moore, who was brought into the Nike fold by marketing man Rob Strasser, was a key part of the team (as Nike’s creative director) to fight back against Reebok’s reign over Nike in 1984 by creating the Air Jordan I and its related campaign. Moore was also half of the design team (with Bruce Kilgore) behind the less successful (but brilliant) Air Jordan II, a mastermind when it came to selling visible Nike Air and he designed the Jumpman before he and Strasser left Nike in 1987, leaving the design duties on that line to a former architect he recruited called Tinker. For those achievements alone (and it’s worth noting that Moore himself doesn’t consider himself much of a shoe designer), immortality in the industry was guaranteed to some degree. Leaving to start their own company (and apparently making an attempt to get MJ on board too), Sport Incorporated, with Benetton, Taylor Made and PF Flyer as clients, they took on the inner-city market targeting VanGrack brand, that used MC Shan as a frontman for a promo video. Then Rene Jaggi — chairman of adidas — got in touch in summer 1989, asking for a meeting. 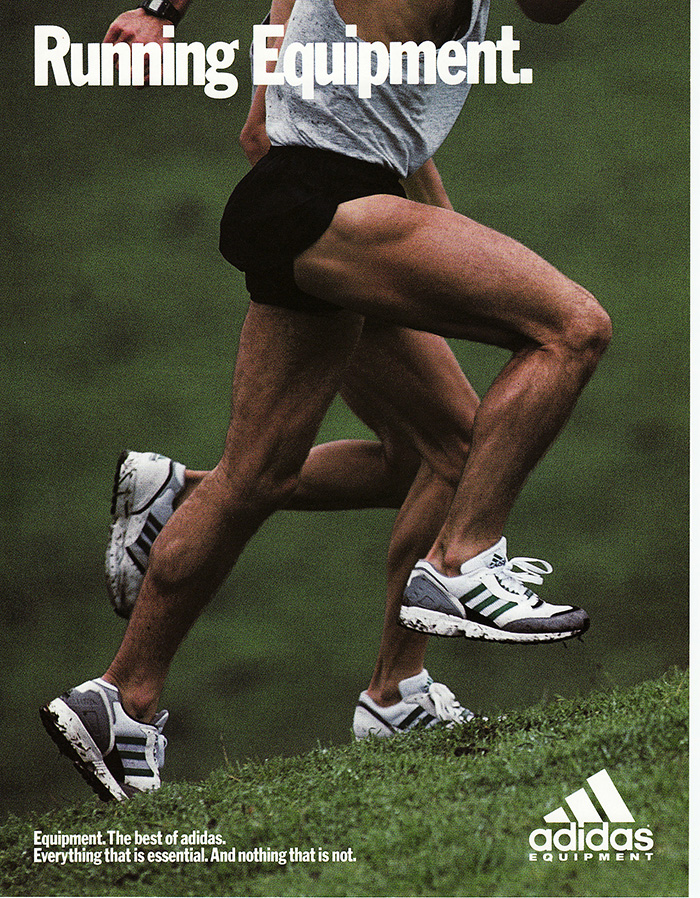 In the era of technology wars and brand battling, adidas was suffering. Now, designs like the ZX 8000 are considered classics, but beyond core European markets who were 3-stripe loyal, the brand was losing money and found itself in an unfocused situation that had killed its visibility in the USA. While Reebok’s position at the time was strong (this was the year of Pump) the very things that Moore, Strasser and Mr. Hatfield had created had done some serious damage to adidas’s share of the industry. The situation was grave enough that the Sport Incorporated team, leaving Portland for onetime enemy territory in Germany, proposed an anti-glamour, pure performance, no-bullshit approach to the top-tier products with a name that was defiantly fashion-free, Equipment (“The best of adidas“). Every discipline would get its own flagship shoes in a new colour palette with a new logo that was created with Moore creative directing and legendary adidas designer Jacques Chaissing (creator of the ZX 500 and Forum) bringing them to life. Cottons and nylons on apparel and bags would be picked for their quality and the notion of the ultimate didn’t mean extra technologies — one of the tenets of the original designs was to use the 3-stripes as support features whenever possible so they actually functioned. This wasn’t heresy — it was an attempt to bring the spirit of Adi Dassler’s vision of sportswear as a tool back to the company. Moore never seemed to have much love for the fairly recent Torsion Bar technology, but it was present in the original March 1991 rollout and first few seasons as part of the original Guidance, Support and Cushion, but would be altered dramatically in the next year for the new interpretations of those three shoes (named, appropriately matter of factly, after the main purpose of each design). EQT (which even released its own jeans) seemed like a retaliation to ACG’s then-popularity. There was EQT football, rugby, basketball, tennis, badminton and much more — each linked by a certain refinement and advertised in a particularly no-nonsense way. 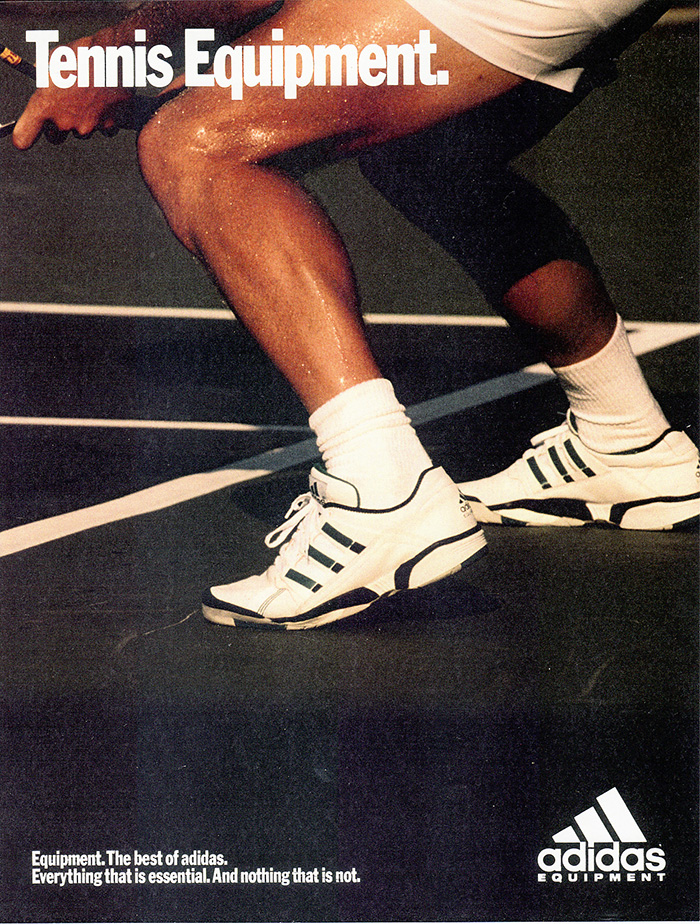 That adidas were willing to let the colours get switched (reds and blues would be added over time) was significant but letting the man behind the Jumpman change the logo from the trefoil to the stripes was an indication of how open they were to solutions as a new decade started. Moore and Strasser felt that the trefoil represented another new category they’d been discussion — Originals, which would be upgraded lifestyle versions of classics that capitalised on an interest in classic adidas at the time. Sadly, Rob Strasser would pass away in late 1993, but Moore would stay with adidas until 1998, and remains a consultant to the company. That gap between Originals and Equipment would, in the decades that followed when what was once a shock of the new became the stuff of nostalgia, stop the series from being retroed, bar a scattering of shoes. How could Originals put out the product that drew that line in the sand that determined that it couldn’t be Originals? It’s good to see that issue resolved, just as it’s good to see the shoes brought back in an appropriately no-bullshit way. One of my favorite things about the Equipment line is this video from 1990, cut to We Didn’t Start the Fire by Billy Joel and assailing the viewer with a montage of Nike, Reebok, ASICS, Geraldo, Mr T, Tyson, Rambo, Madonna and much more. Made for internal use to give either employes or potential retailers a sense of what EQT was meant to be a reaction to. Source: Gwarizm 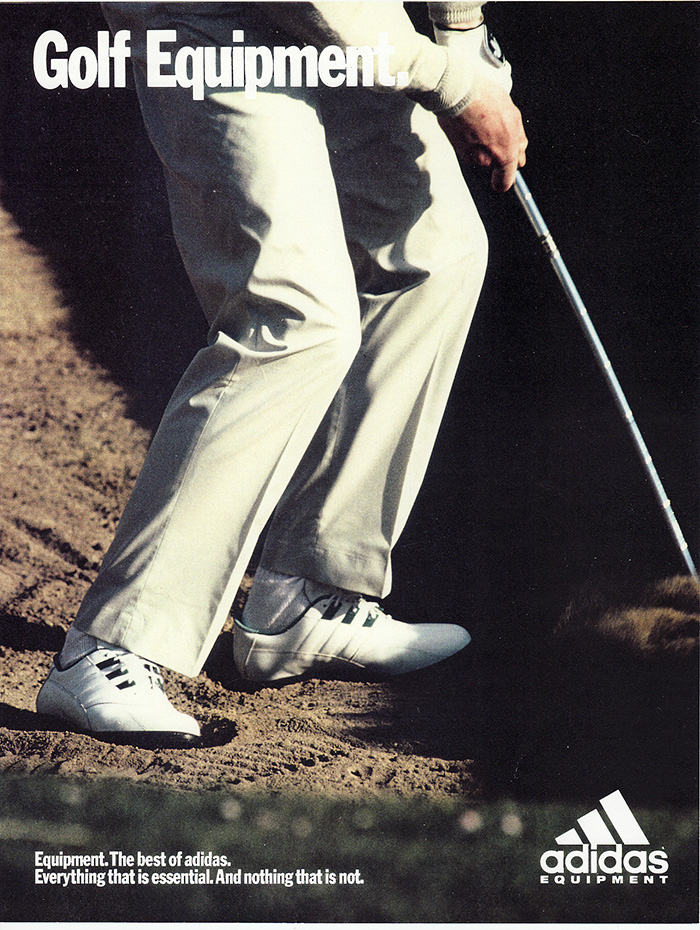