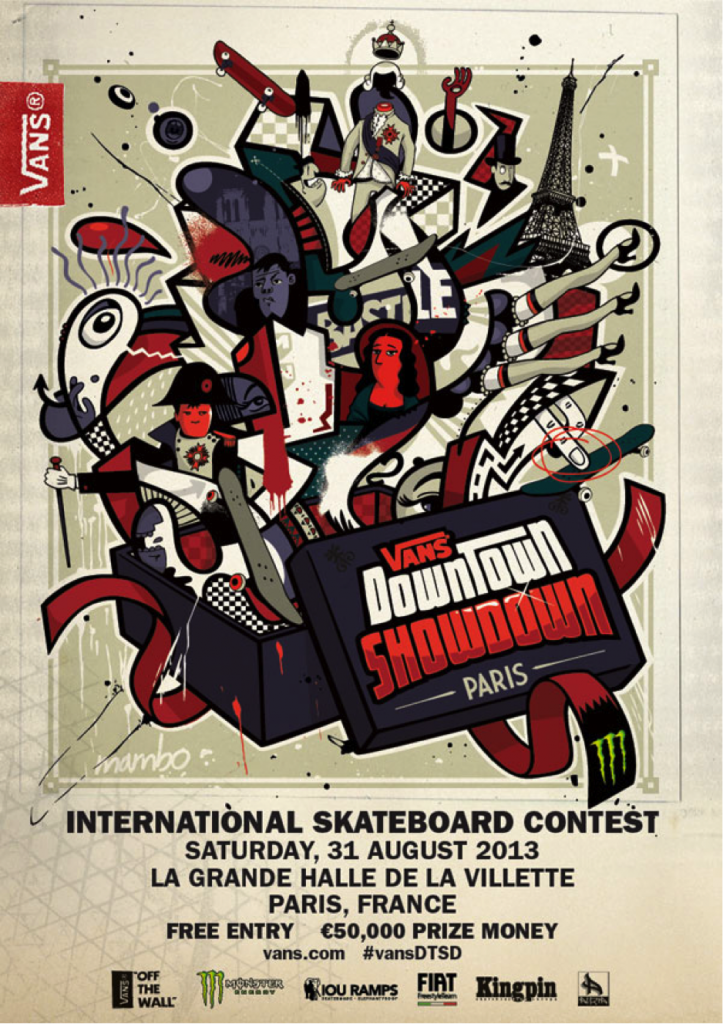 The infamous Vans Downtown Showdown returns to Europe this summer to take over yet another historic destination. Paris’ famous landmarks won’t be the only sight to see when artists of a different kind descend upon the city for Europe’s most innovative Skateboarding contest. Now in its 5th year, the Vans Downtown Showdown will take over the vast Grande Halle de la Villette, Paris this Saturday 31st August, bringing together the best of skateboarding, art, music and street culture, making it one of the most eagerly anticipated events on the skateboarding calendar. Pitching the crème of the world’s skateboarding teams against each other in not only a battle of skill, but also one of creativity, the Vans Downtown Showdown goes a little “off the wall” as it invites these very teams to design the obstacles themselves. The result is a competition like no other, as the teams go head to head to thrash it out over an unconventional course, ensuring the riding is as creative as the minds of the designers, who are currently busy dreaming up their own obstacles, from peculiar Parisian cliches, to reimagined relics of this chicest of cities. With Torino, Hamburg, London and Paris the previous settings for the European Vans Downtown Showdown, and the infamous Paramount Studious in Hollywood, Los Angeles being the birthplace of this unique event, expectations this year are higher than ever before as Vans and the competitors push hard to surpass the already extremely high standard of the contest. Bringing his artistic flair to the Vans Downtown Showdown, former Paris resident and graphic artist Mambo, creator of the 2013 Vans Downtown Showdown posters, will be painting one of his signature pieces on a grand scale, live at the Grande Halle. Elsewhere, creative workshops will entertain and inspire, whilst an “off the wall” take on Paris’ traditional markets will keep you away from the Champs Elysees. If you’re unable to attend to event itself, check out our exclusive Facebook page – HERE, and watch the full competition live from the 11:40am BST starting time to the 6:30pm BST prize giving. [vimeo]http://vimeo.com/72332689[/vimeo]