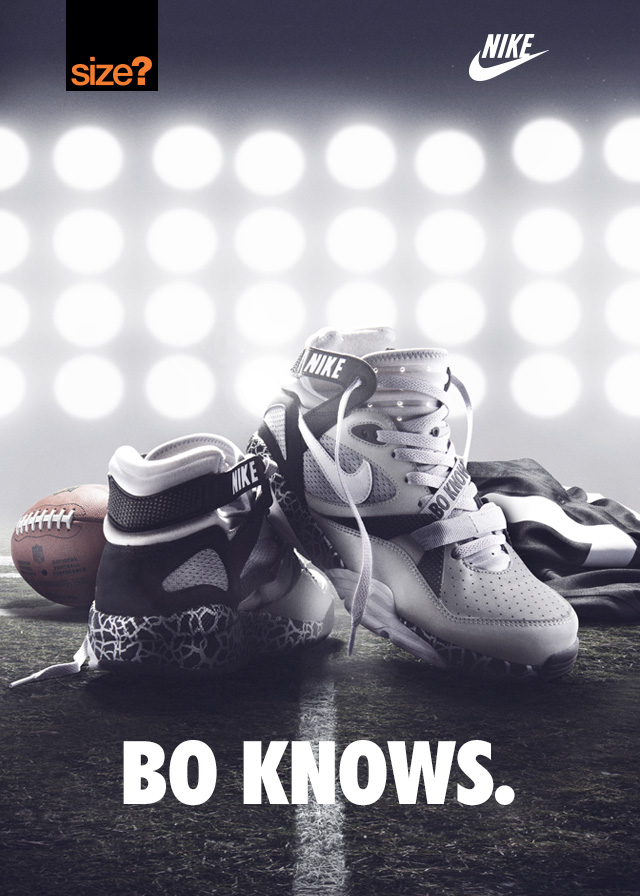 The Nike Air Trainer Max ’91 ‘Raiders’ is now available from our Manchester, Carnaby Street, Birmingham, Covent Garden, Oxford, Cambridge and Paris stores, in sizes  5 - 11UK, priced at £100/135€. They are also available online HERE Today, it’s generally unheard of for a top flight athlete in one sport to cross over into another sport and reach similar success. Towards the end of the 1980s however, one man changed the game being named as an All-Star in two American sports. Vincent Edward Jackson, or “Bo” as he was known,  played both in the National Football League as running back for the Los Angeles Raiders, and in Major League Baseball for the Chicago White Sox, Anaheim Angels and more famously the Kansas City Royals. Because of his incredible physique, strength and speed through both careers, he was regarded by many as one of the greatest and most versatile players of all time. He took the now legendary Oakland Raiders to the top of the league and had continued success in both sports until he received a hip injury in the 1990 Playoffs, ending his football career and greatly damaging his professional baseball career. To commemorate Bo Jackson, his talents and his time spent with the Los Angeles Raiders, Nike have now created this version of the cross-training silhouette, Air Trainer Max ’91. Featuring a range of team coloured aesthetics, such as the cracked midsole and branded heel tabs (the right shoe includes Bo’s ‘34’ jersey number), the chunky model also hosts 3M upper panelling around the toe box and a supportive strap with the well-known tag line “Bo Knows”.