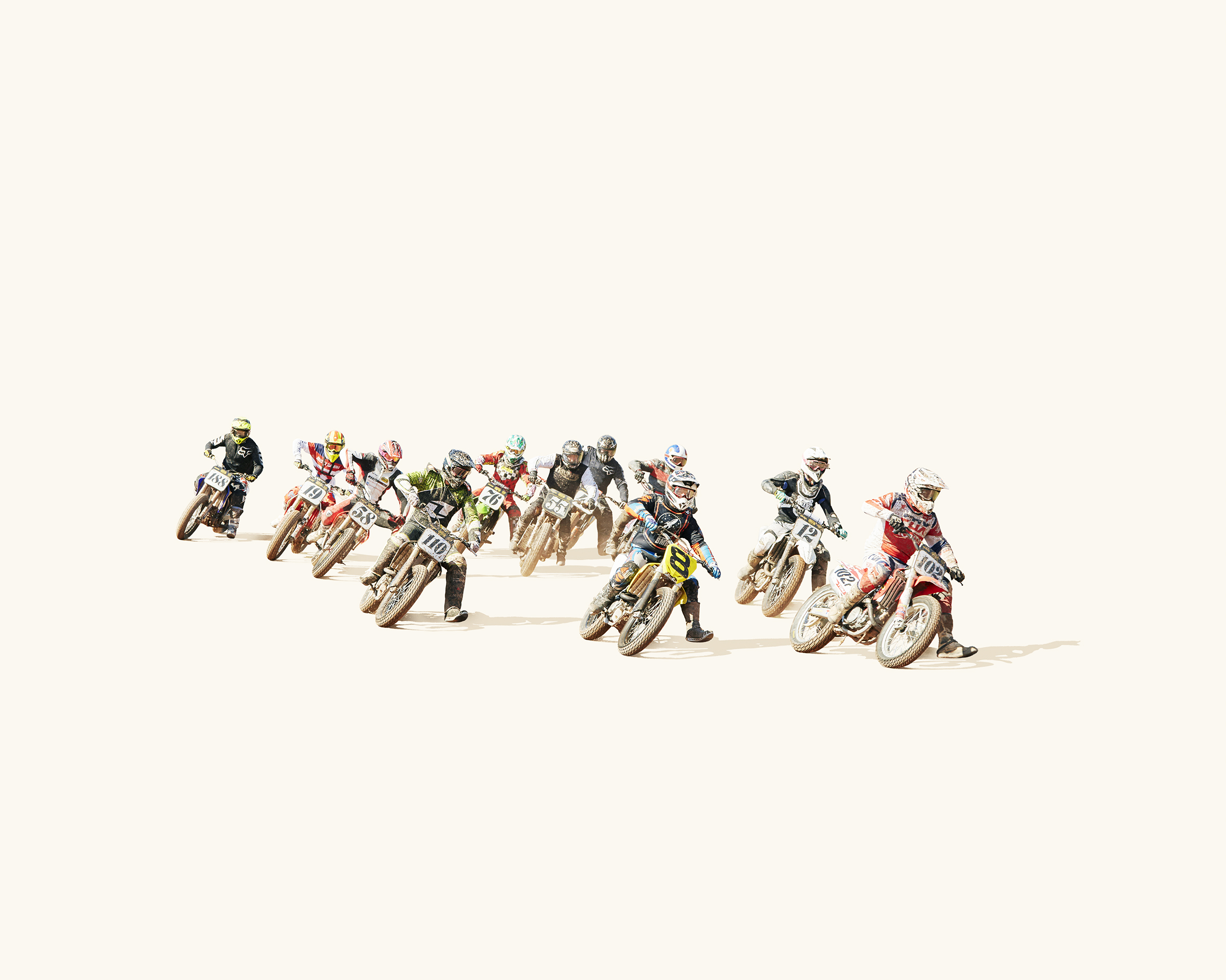 Dirt Track is a roots-and-culture motorcycle race scene where going fast and turning left is all that matters. This is purist racing but accessible to all. Dirt Track characters are diverse too — the style landing somewhere between b-boy and greaser. This is a space where subcultures collide 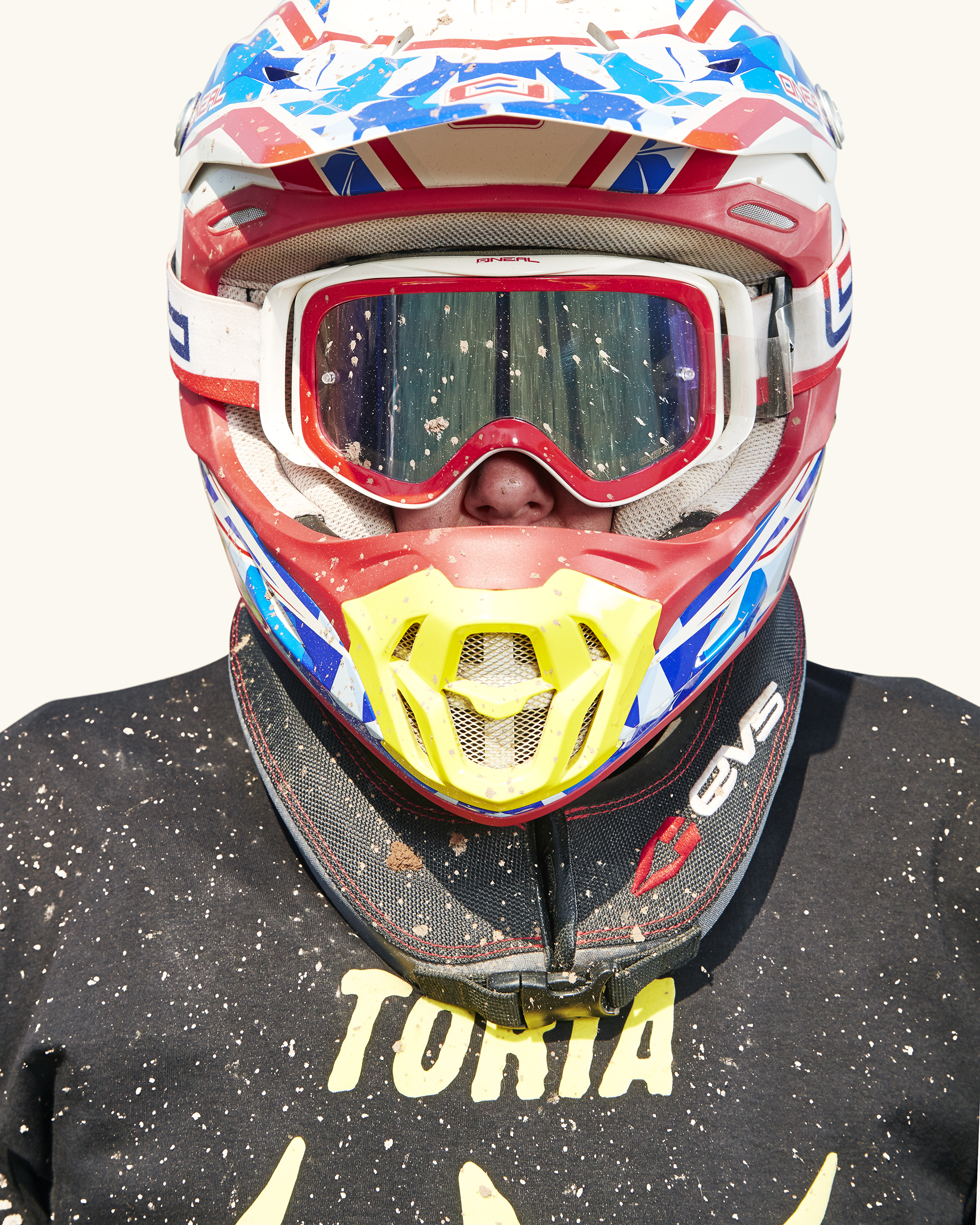 The Hertfordshire racetrack is over the canal, across from the residential streets and low-rise flats. A Sunday morning noise curfew is in place. No race bikes can start until 11am. At 10.45 shouts go up for the riders’ briefing, the dos and don’ts, the morning assembly of parish notices and any other business. Eager beavers march over to the only area left open in the packed pits to wait for the meeting to start. Steel shoes, curved soles strapped to left boots, clomp-skirsch as riders move around the race track’s paddock. More shouts go out for the stragglers to attend, those who either think they know it all or are fiddling with their boots’ zips and clips and body armour straps and buckles.
Riders have been arriving since 8am. Some of them slept in their vans or motorhomes in the car park overnight, waiting for the gates to open, but it is only now that I can tell the difference between the riders and their friends and family. Now it’s clear that the teenage girl isn’t stood next to her grandad. It’s someone she is going to race. 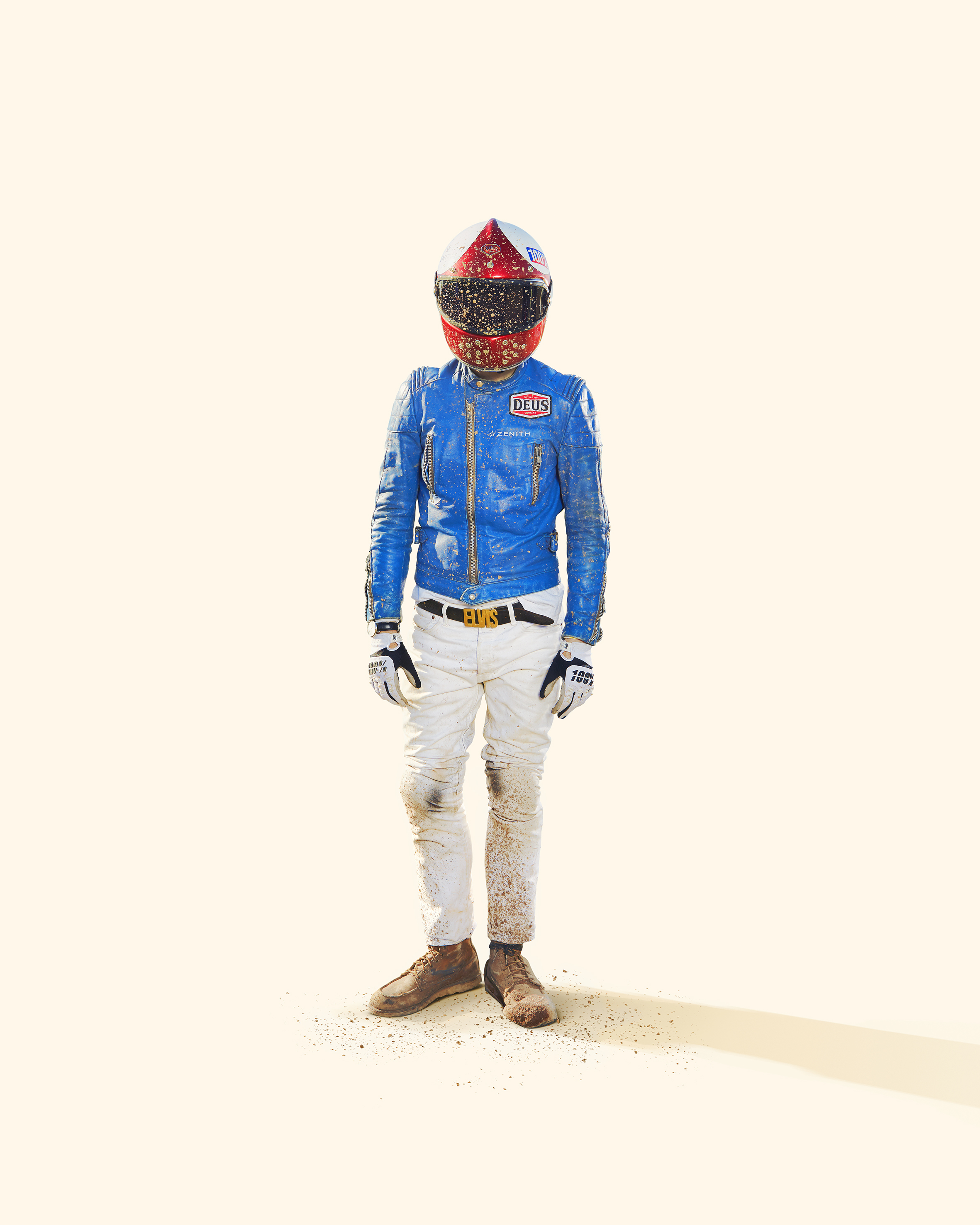 It is impossible to pigeonhole a Dirt Track Riders Association (DTRA) racer. If this lot all walked off a coach into motorway services dressed in their regular clothes, there would be no way anyone could pinpoint which sport they were on their way to take part in. Unlike most sports there is no uniformity, either in dress, age, physique or cultural background. The motors between their legs go a long way to levelling the playing field. While the DTRA is entirely amateur, only rewarding winners with plastic trophies, it rates participation above all else. It’s better, they believe, to be at the back on the track, than at the front of the grandstands. This pick ‘n’ mix of amateur racers reminds me of the deck of a deep sea trawler that’s just filled with the wriggling mass from a split net. There are the sleek tasty morsels that look like something you’d see on an advert or a tin, but there are also the misshapen lurkers with eyes in the wrong places, the odd deep sea monster and a creature that’s just tentacles and head. Yet they are all, to a man, woman and boy, motorcycle racers. Even the ones who would get thrown back overboard. The majority solemnly listen to Anthony Brown, the DTRA don, heads cocked like spaniels being whispered to, as the riders’ briefing continues. Brown delivers reminders that, “This is a friendly club and we don’t want dangerous riding,” in an effort to prick macho pricks’ bubbles. New members are welcomed and threats about what will happen if anyone jumps the start are issued. 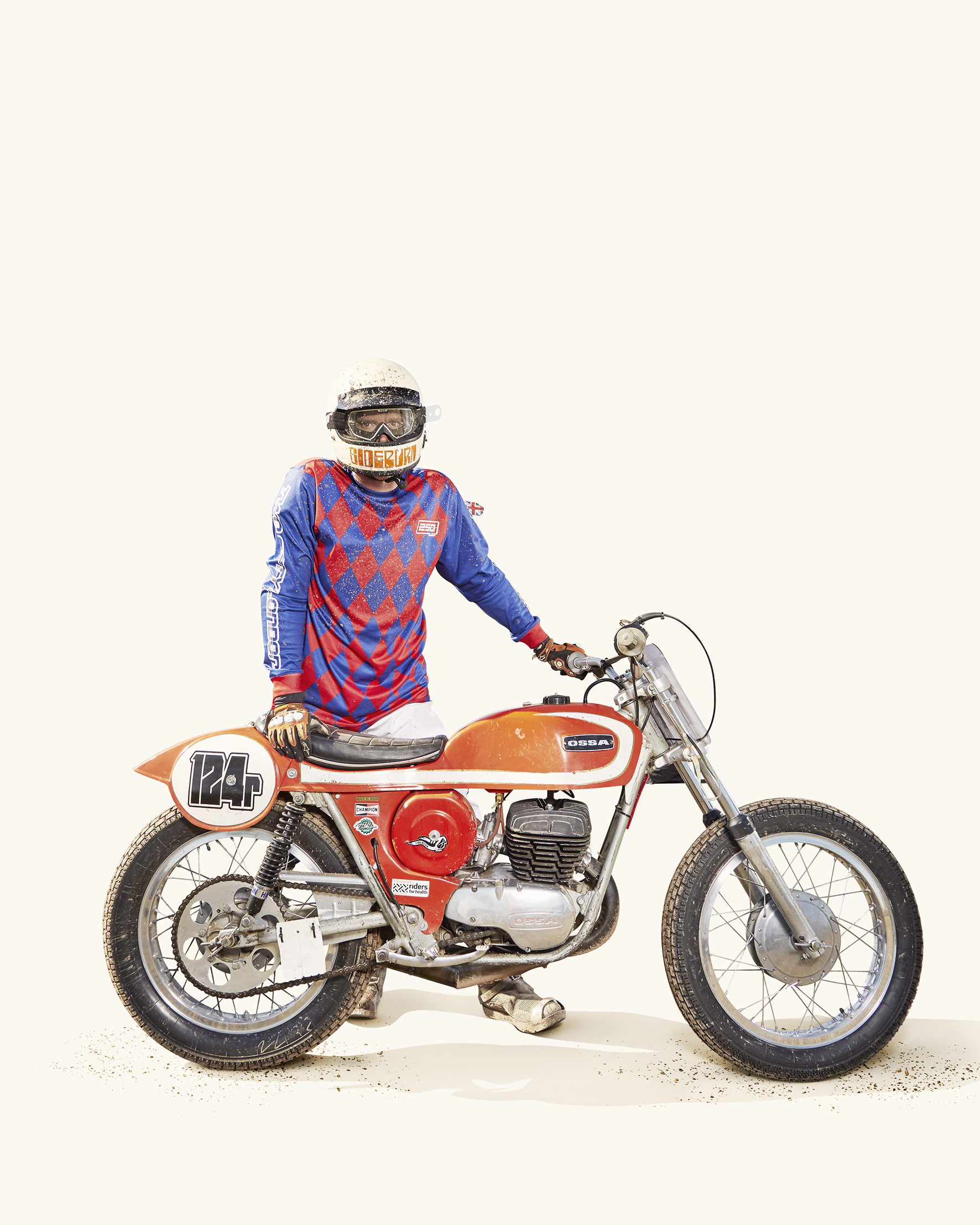 The sport everyone in this Hertfordshire huddle is nervously itching to take part in is dirt track, also known as flat track. It’s an American import, and one that bills itself as the original extreme sport. Dirt track really took hold in the UK ten years ago, after years of failed attempts to launch it here. Now, the DTRA has become so popular it’s in danger of outgrowing the space and facilities at the UK speedway tracks it uses. Pro speedway attracts more spectators, but only ever has 16 riders. Today’s meeting has had to be split into two halves because there isn’t room for all the 120 racers to attend at one time. I’ll keep it simple, because at its core, dirt track racing is as simple as a boiled egg. Three rows of 12 riders line up on a dirt oval on bikes with no front brakes and engine sizes of up to 1200cc, but more commonly 450-600cc. Races are held over six to 12 laps. All bikes are fitted with the same fat Maxxis tyres. Counter-intuitively, these are not the best tyres for this surface. They’re not terrible, but the sport’s governing body won’t allow the formula to be significantly revamped. At its very pinnacle, the Grand National Championship in the USA, the pros are racing on a tyre with a tread pattern that hasn’t changed since Elvis was chowing burgers for breakfast. Working with old school tyre tech means the engines easily overpower the tyre, so it’s dependent on the rider’s skill, throttle control and exaggerated body position to keep the whole thing from going shit-shaped. That is why the world’s best-paid motorcyclists, MotoGP heroes, Valentino Rossi and Marc Márquez, both train on dirt track bikes to improve their control. 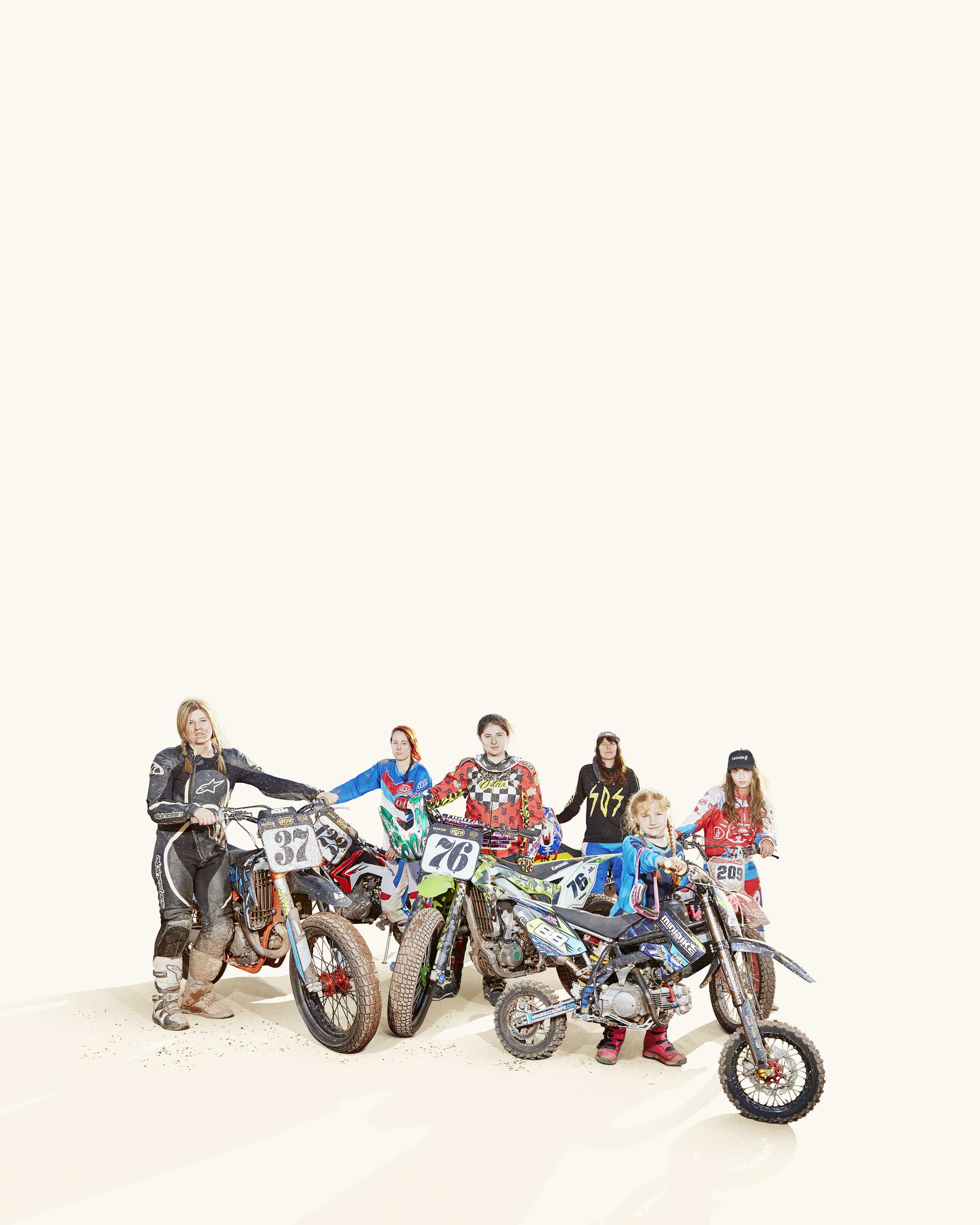 Fat road tyres mixed with loose, damp dirt means traction is at a premium. And the bikes only have rear brakes, remember, so it’s a miracle that first corner pinch points are not a day-long series of pile-ups. But that’s what attracts the racers and the fans. A heavyweight dirt tracker, 750cc and 130kg of death metal skidding into a corner, mere centimetres from another have-a-go hero, both of whom have work in the morning. It’s an arresting sight. The spectators, who in many instances have turned up on their own motorcycles, suck their teeth dry, eyes wide behind their Ray Bans because they can all too easily imagine the weight and momentum of the bike bucking and weaving, on its own futile search for grip. At the end of the race the sweating mess of rider/wrestler rolls off the track and back into the pits. On their way, they enthusiastically high five a friendly fellow racer, a slapped sign of solidarity and confirmation of their mutual survival. Then they remove their dirt-plastered helmet and, wait a minute, we see they’re nothing special. They could be a tubby tiler, vegan art director, freckly schoolkid, farmer, pilot, paramedic, student, photographer, decorator or just about anything you can imagine. There is always someone to relate to, whether it be the Northern lads who came from BMX in black denim and Vans, the recreationists in Lewis Leathers and Red Wings or the young women who swap lairy Air Max and dolphin shorts for an eye-bleed ensemble of clashing Kevlar race suits, X-Ray Spex goggles and helmets painted a fetching shade of neon. 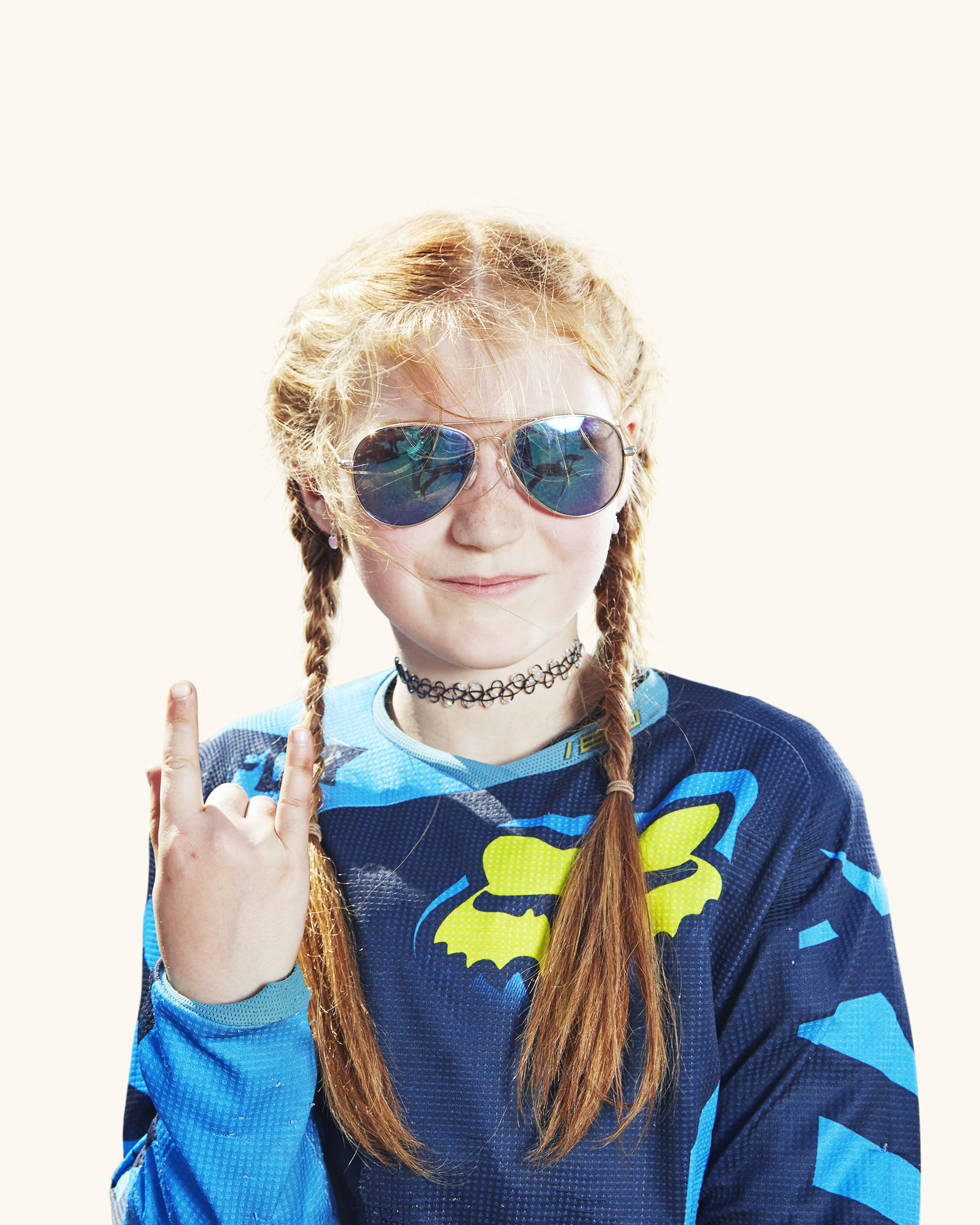 So dirt track’s initial attraction is performing the perfect go fast turn left manoeuvre, the broadside skid into the corner and the handful of throttle that spits a rooster tail of grit in the air as the bike opposite locks out of the turn and launches down the straight. Then there is the relative affordability, in motorsport terms, that facilitates the participation and gets people out of the stands and onto the track. A half-decent bike, one that the right rider could win on, can be bought for less than £2000, tyres can last a whole season and race entries are just £45. You can see from these photos that riding kit can be cobbled together, as long as you have a good helmet and they needn’t cost a bomb. But it’s the atmosphere that keeps people coming back, race after race, season after season, from all over England, and beyond, and that has seen the DTRA almost double in size in the last three years. You don’t need much of an imagination to envisage the potential for danger in a sport like dirt track , especially at an amateur level, but after 60 individual short, sharp races crammed into six hours of on-track action, there were only two red flag incidences. That is when the race had to stop because crashed bikes or riders couldn’t be moved out of the way before the racers came around for another lap, less than 20 seconds later. The ambulance crew dealt with one injury, perhaps two, but no one was carted away to hospital. When the trophies have been handed out the riders split like woodlice scarpering after a paving stone has been lifted up. They’ve all got work tomorrow. And next month’s DTRA race to dream about, of course.