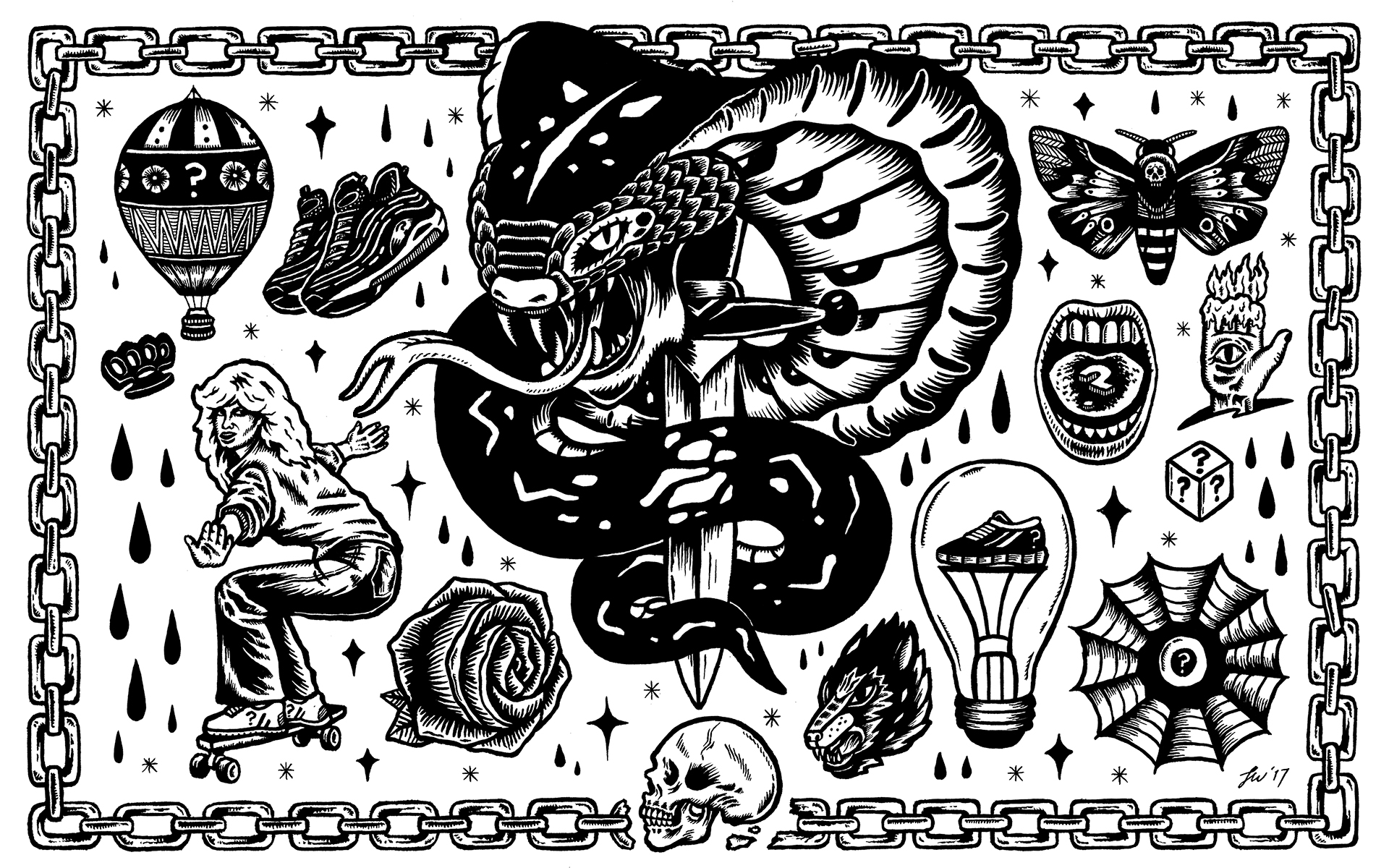 The next artist up for our size?series feature is James Wilson, an illustrator and designer from Exeter, but now based in the bohemian city of Bristol. Working across a wide and varied range of media, James Wilson’s illustrations have been applied to a plethora of content that includes editorials, clothing, posters, books and album design. James utilises a bold and detailed style to his artistic endeavours, using vibrant colour in each piece. Wilson’s work draws influence from what he grew up with; 80s popular culture - referencing movies, heavy metal music, skating and other 80s nostalgia - all in his unique bold, style of illustrating. 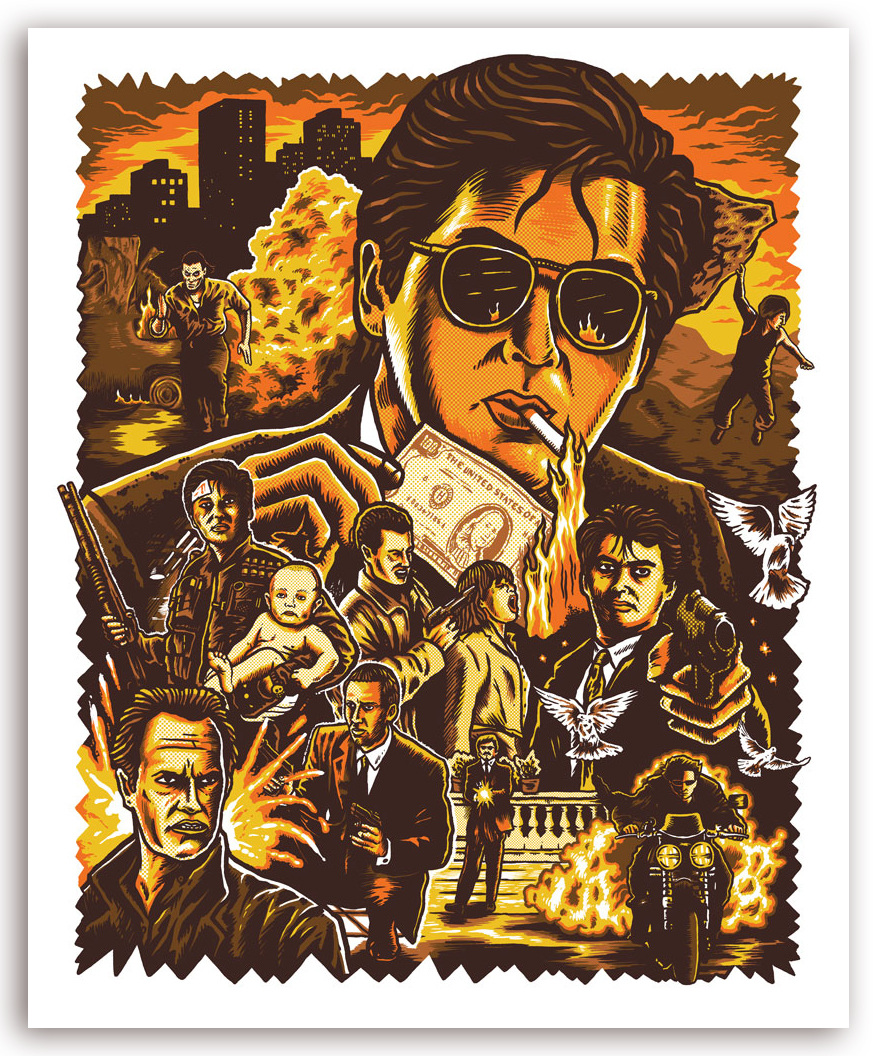 From a young age James has channelled his creativity and has been drawing for as long as he can remember. He started by sketching his favourite cartoons. James Wilson has worked across some of the most influential media platforms creating imagery and boasting clients that include; Crack Magazine, Little White Lies, the NFL, Virgin Media and the Guardian Guide. James also cites that living in the creative city of Bristol as a continuous source of inspiration, living amongst a group of creatives as well as playing in a band in his spare time. 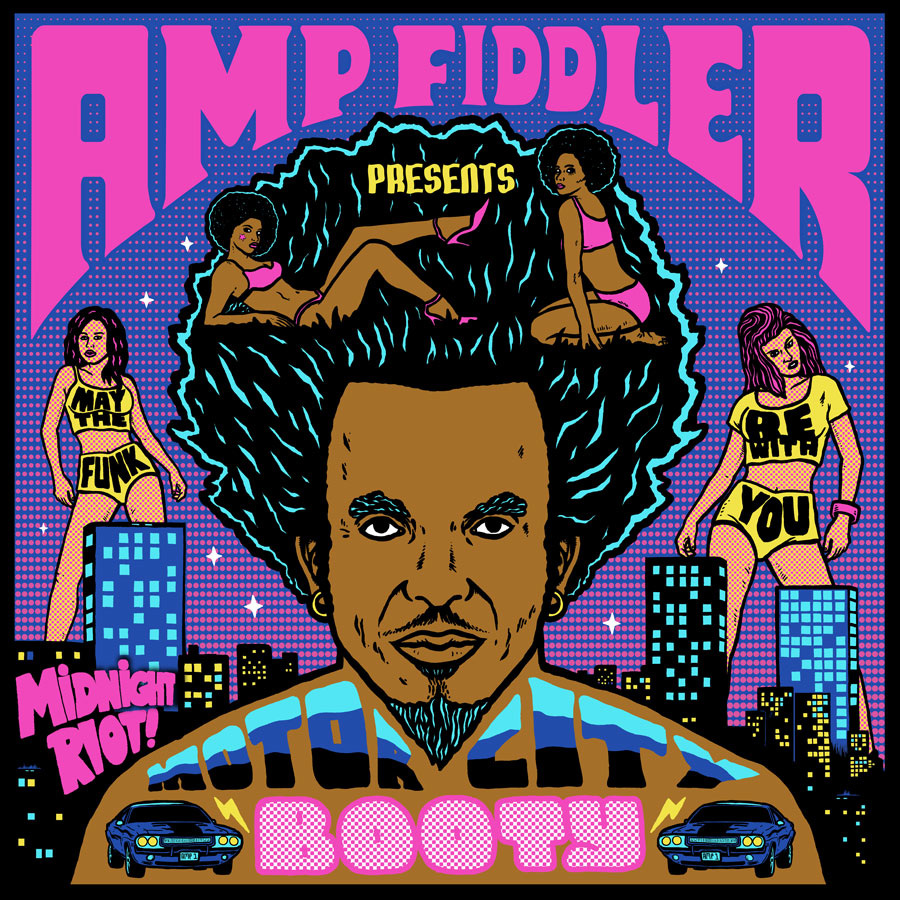 For his interpretation of our icon, James has created a piece full of 80s characters and references, in his unique style of illustrating. A self-professed tattoo fanatic, Wilson has re-imagined our question mark at the centre of a tattoo flash sheet, with our icon taking the form of a cobra wrapped around a dagger. James particularly enjoyed the challenge of interpreting our icon, combining elements of size? with a traditional tattoo style imagery. 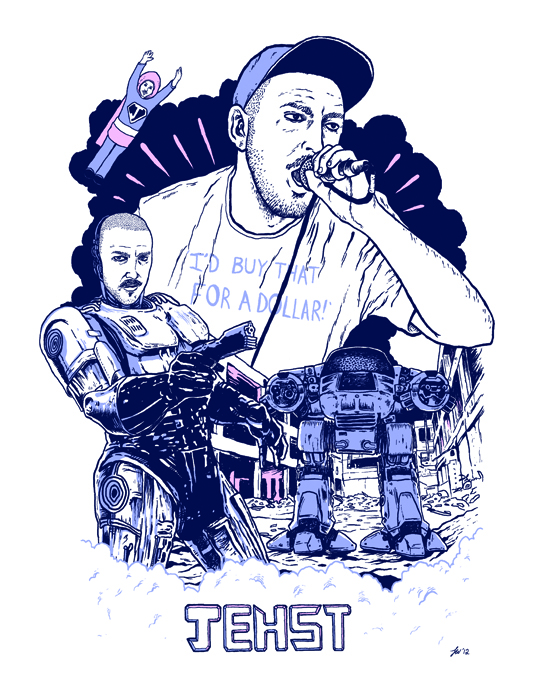 We caught up with James to  find out a little bit more about his day-to-day: Hi James, could you tell us a little bit about yourself and your style of illustration?
I’m a Bristol based illustrator, originally from Exeter but have been living here the last 10 years. My style is pretty bold and detailed and often features elements of pop culture, buff blokes, hot babes and skulls. You reference 80s culture in some of your works. What is it about that decade that inspires your illustrations? I grew up on a steady diet of 80’s movies and was always mesmerised by the posters and VHS cover artwork that promoted the product. The artwork was the only way to gauge what the movie was about as trailers weren’t so easily accessible and were often rich with details you could miss the first time round. There was something intriguing about that to me, you could imagine a narrative based on that image, a portal into another world. With my illustrations I aim to create a similar level of intrigue. You’re based in Bristol, a city synonymous with artists and multiple creative movements. How inspiring, as an artist, do you find living and working amongst other creatives? I’m always inspired by others around me, I live in a house full of creative people, illustrators, designers and photographers and play in a band with guys who tattoo and make t-shirts. There’s definitely no shortage there! You’ve worked and created content across a wide range of media, for a mix of clients. How do you go about interpreting briefs for each? Sometimes the client will directly reference a couple of pieces from my folio and other times it’s more down to me to decide on the direction. I find that personal projects between commercial work can really help with progression. I like to experiment and try new approaches and media and often those experiments lead onto a print series or commissions. Are there any projects you’re working on at the moment that you could share with us?  I’m currently working on a poster for a short indie movie called ‘Master Of Ceremonies’ (work in progress crop attached) and a poster for another short film. I’m also in talks about an animation for a music video. Could you tell us a little bit about the artwork you’ve presented for our size? series? What inspired the illustration? At the time I was asked by Size? to create this piece I had just finished a custom hand painted Levi's jacket for my girlfriend, I’m a big fan of tattoo based artwork and thought the flash sheet approach would be a good way to combine elements of the brand’s personality with more traditional tattoo style imagery. Plus I got to draw a cool snake.’ 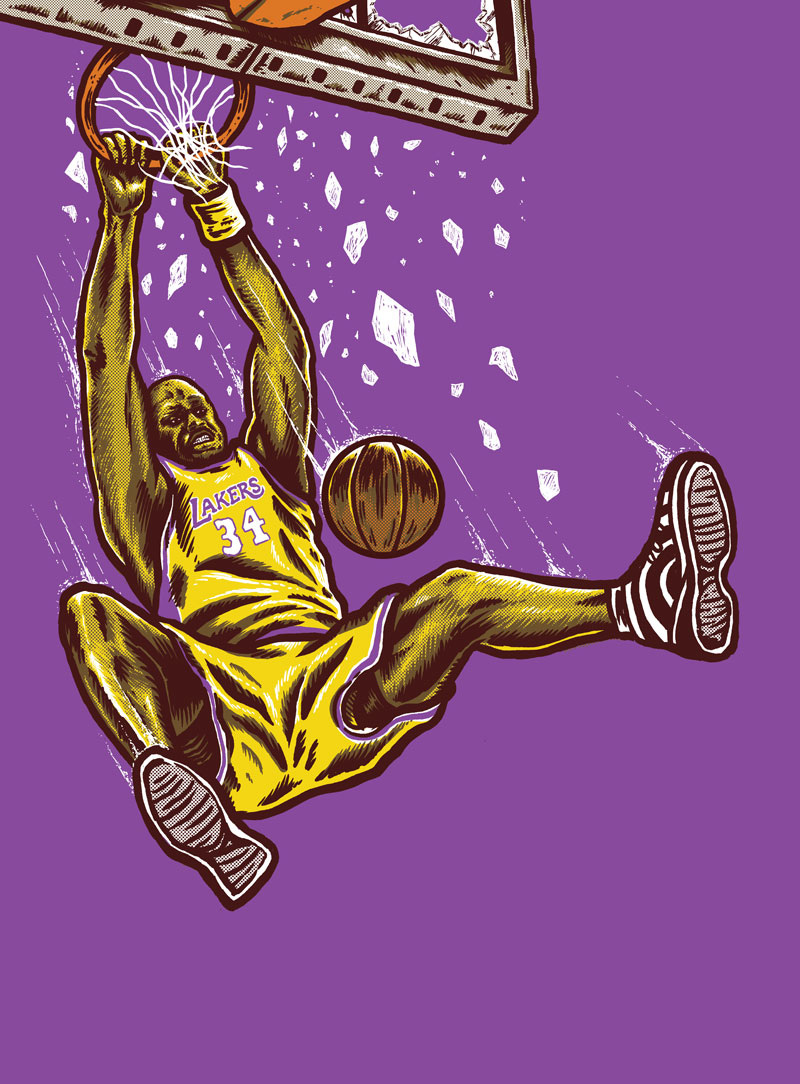