Home  /  Fresh News   /   A Retrospective Look at Nike in the Olympics

A Retrospective Look at Nike in the Olympics

Outfitting some of the greatest athletes on the planet since the early 1970's, we take a look back at some of Nike's most well remembered Olympic moments, told through the equipment used by each champion. Michael Johnson's Gold Spikes 1996 The stage for Michael Johnson's incredible athletic performance this time round was Atlanta. Before even stepping into the Games, Johnson had his sights locked on gold when preparing his required sprinting kit. He wanted Nike to create the lightest shoe ever made for a sprinter, that would allow him to shave 1/100th of a second off his time and as well as taking the gold, breaking the current world record held by Pietro Mennia. A bespoke shoe was created especially for Johnson which was emblazoned in gold, a statement of intent for his Olympic Record breaking performances in the 200m and 400m of that year. Working closely with Tobie Hatfield and the product development team, and created a shoe that catered to Johnson's particular style of running. The way he took corners required asymetric spike plates that varied on each shoe, in order to provide the correct amount of grip that would help him to power around the bend. Phylon was a traditional lightweight material that would later be seen as the primary construction material for the midsoles of the Mayfly and Air Presto, but in this instance it formed the whole outsole to reduce weight. https://www.youtube.com/watch?v=JQ9cBQANjiw

The Dream Team III Following in the rather large footsteps left by 1992's original dream team, a new squad (including a few familiar faces from the previous games) stepped onto the hardwood to clinch the coveted gold once again. Among the plethora of shoes created for the games (shout's to Charles Barkely’s Air Force 180’s) one pair stood out instantly. Scottie had already made a name for himself wearing the original More Tempo (the OG Black & White version, which changed it’s name to the ‘Uptempo’ years later) during the Bulls’ historic season that year, and although it wasn’t specifically his signature shoe, by the time the Olympic version came around the association was pretty much sealed (He’d later go on to receive his own official Nike signature Pippen series in ’97). Instantly the navy ‘Olympic’ version has a lot more visual impact on foot, with the block capital ‘AIR’ lettering extending down onto the midsole rather than the simpler outline on the first version. 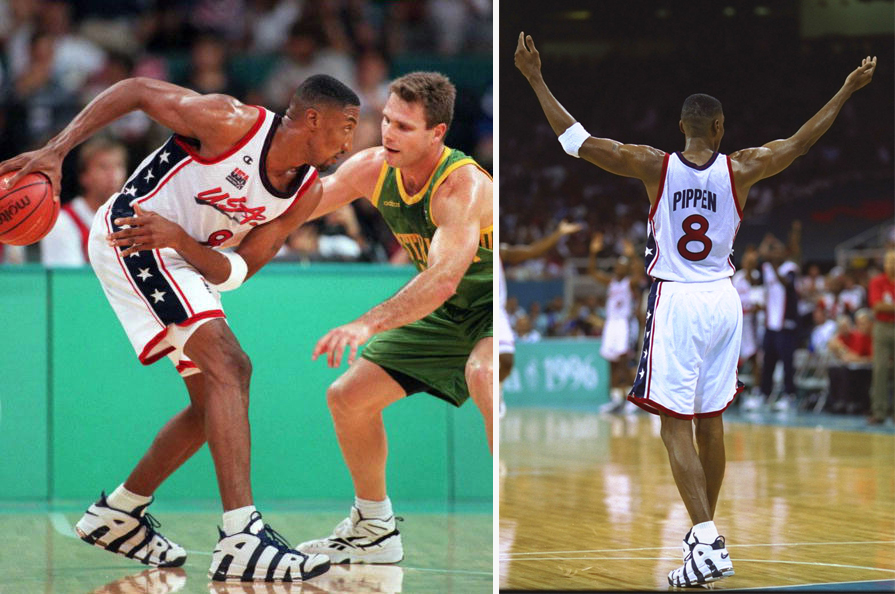 Both Gary Payton and Reggie Miller also wore an alteration of the eccentric sneaker, the Much Uptempo. The difference between the two styles is the midsole tooling, with the More you had a full length airbag at your disposal, whereas the Much had a single bag located in the heel. The reasoning behind this may be down to the weight differences between the three players, with Pippen weighing in at 225 pounds, while Miller and Payton sat below at 190 which would drastically affect the way your feet dealt with the impact of hard landings. 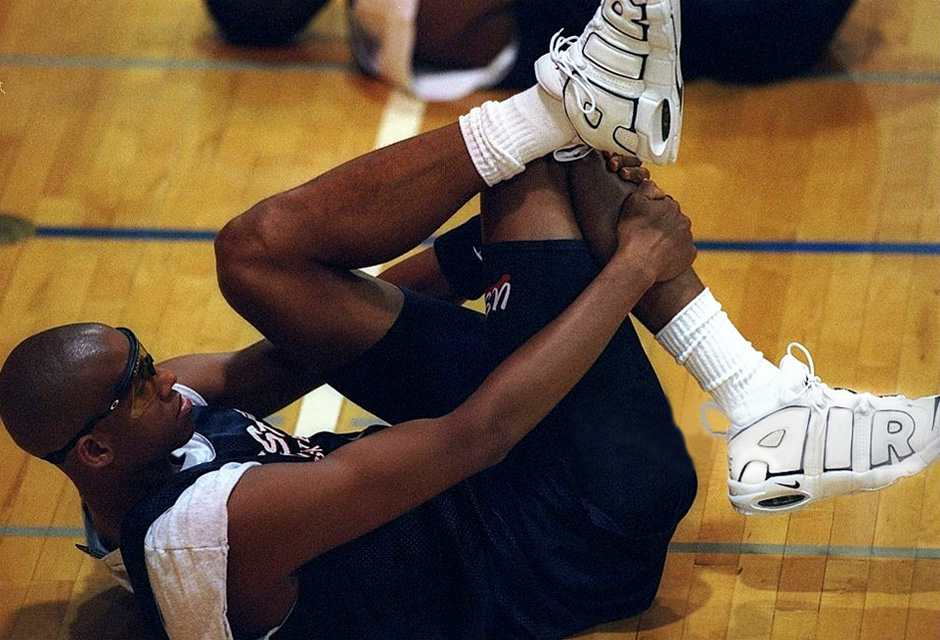 Derek Redmond's Hamstring Injury Although not a Gold Medal orientated story, it's a tale of both of tragedy and true sportsmanship, whereby many will have watched in awe at the courage on display. British runner Derek Redmond set off at good pace out of the blocks from the start of the 400m race at Barcelona '92, but halfway through the course disaster struck. Redmond's hamstring snapped dramatically and he descended to the ground in agony. After taking a moment to control the pain, he suddenly remembered where he was and the enormity of the event, and knew he had to at least cross the finish line. Getting back onto his feet, he began hobbling down lane 5, followed by a trail of confused officials trying to guide him off the track. He then felt a presence beside him as he limped across the track. His father! Determined to help him finish the race, Jim Redmond took hold of his son and supported him for the rest of the distance. An unfortunate blessing in disguise of sorts for Nike, Redmond's father was draped head to toe in their apparel which held the audiences attention for the remainder of the race. The aptly captioned 'Have you hugged your foot today?' Air Huarache T-Shirt and a pair of Air 180's were most memorable beside Redmond's pained expression. 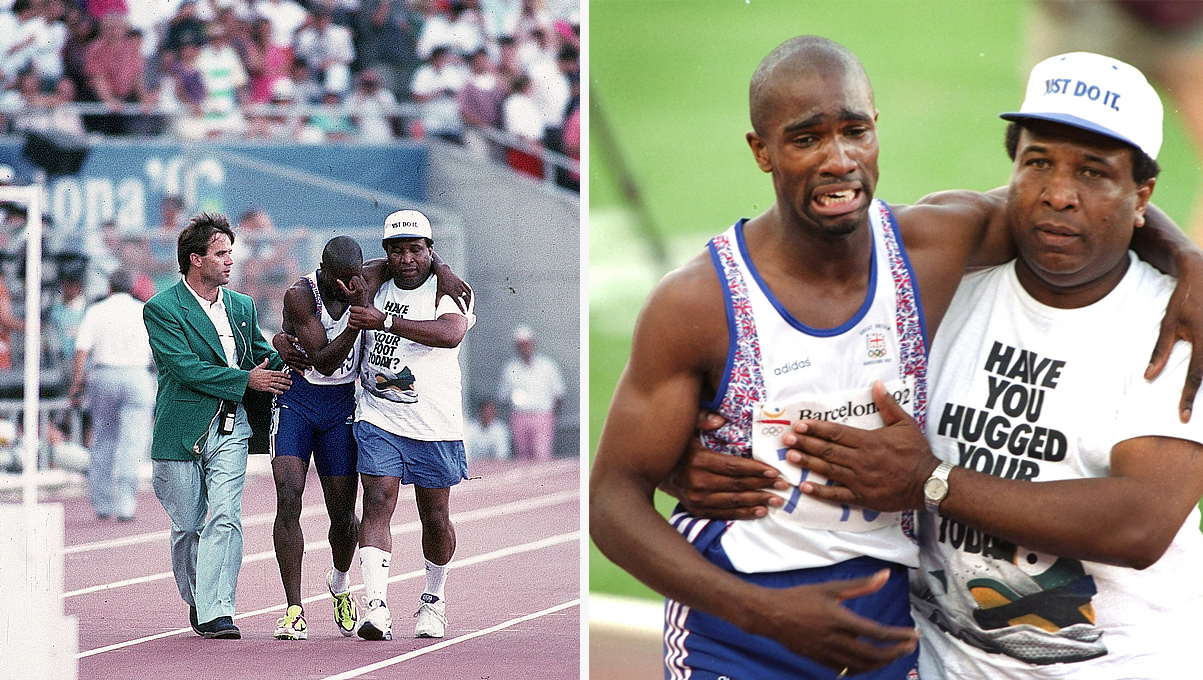 https://www.youtube.com/watch?v=t2G8KVzTwfw Cathy Freeman's Nike Swift Suit The 2000 games took us down under to Sydney, Australia, and the final handler of the Olympic torch be would end up being one of the most memorable athletes from the games. Native countrywoman Cathy Freeman took Silver in the 400m in Atlanta four years previously, and came back hungrier than ever for the gold. The silver suit she wore during the opening ceremony was a taste of things to come in terms of here appearance in the 400m finals. This white suit was subsequently stolen from Freemans dressing room after the ceremony, and ended up being handed into the Melbourne Cricket Ground in 2014, 14 years after the initial incident. Complementing the suit, Freeman could also be seen wearing the Nike Air Presto 'Abdominal Snowman', one of the original 13 colourways that released in 2000. But the real suit we're taking a look at was her iconic full body piece used in her finals. A head to toe covering one-piece designed by Nike was created to reduce air drag caused by surface disturbances in a standard shorts & singlet set-up. Debuting at Sydney, the concept itself was inspired by cycling and speed skating, high-speed sports where every attention to detail can make the difference between gold and silver by even the most minute of equipment based errors. Freemans patriotic white, green & gold suit was a one of a kind creation that paid off, gifting her the gold in front of a wild home crowd and uniting Australians of every background. 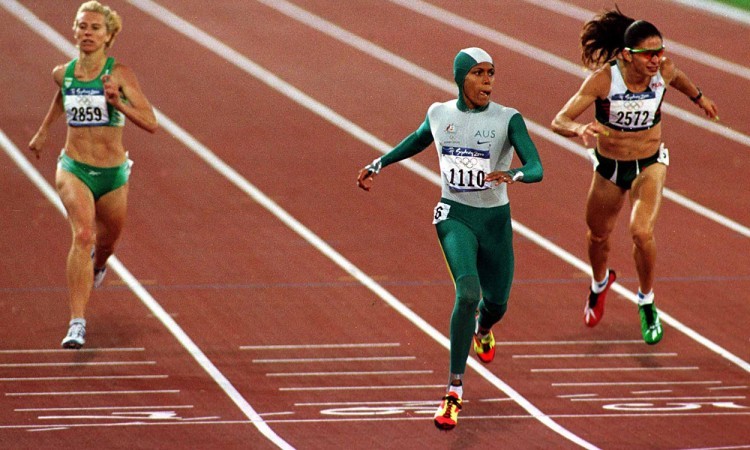 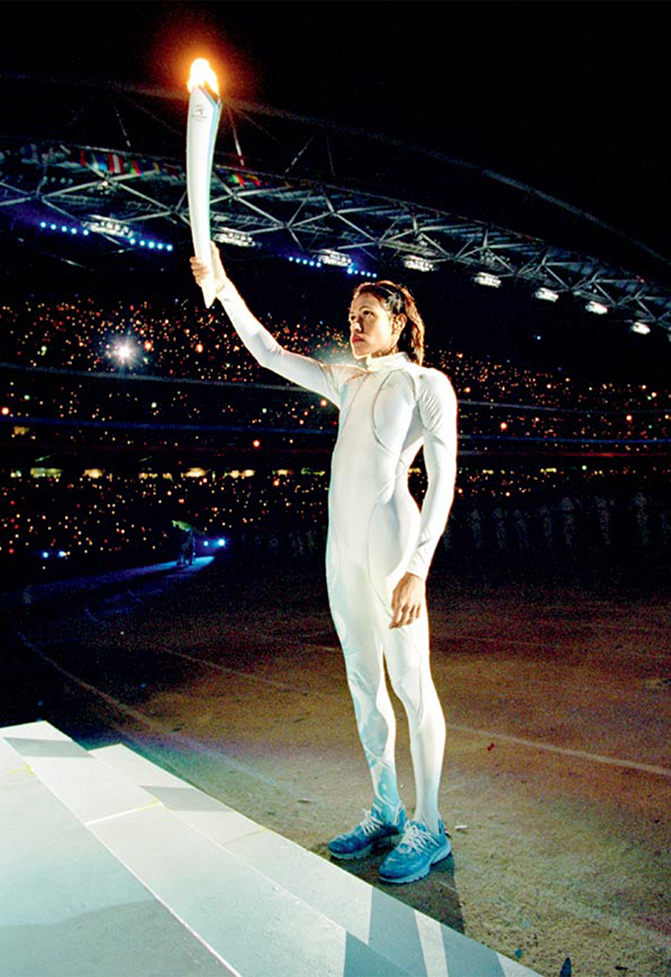