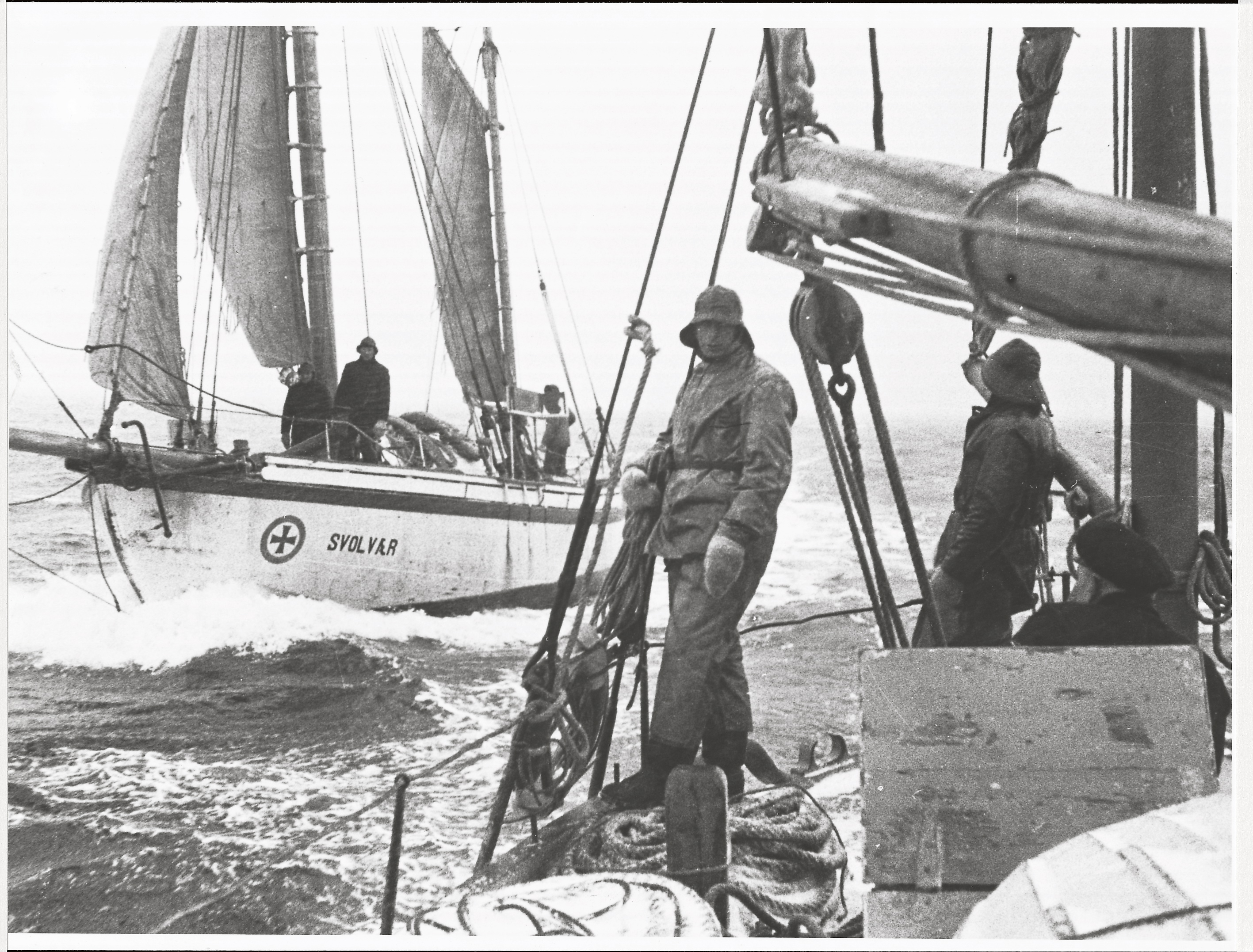 “Got back to the mansion, to divvy up the paper/Helly Hansen was the brain of the whole entire caper”

Q-Tip ‘Drink Away the Pain’

“I went from Helly Hansen to mini mansions”

Mase ‘Top of the World’

“I’m holding up for ransom, still rock the Helly Hansen”

Sometimes trends operate in a strange way — part function and part who-knows-how. For example, how did yacht wear become a familiar name in landlocked inner-city settings? Over the last 25 years, the Norwegian Helly-Hansen brand — a company with 138 years of experience in its chosen field — has sailed the choppy waters of fickle consumers in a world it never initially set sail for.

Founded by veteran sailor Helly Juell Hanson in 1877 (a year after his experience with a particularly brutal storm at sea nearly stopped this story ever starting), the simple act of applying linseed oil to clothing led to an award-winning line of oilskin jackets. By drying the oil using his own unique method, Hanson stayed ahead of his competitors. The company was a serial innovator: even after Hansen’s death in 1914 (with his son taking the helm), new developments emerged. While the understandable assumption might be that technical fabrics are a product of the last 30 years, glossy Linox fabric — launched by Hansen in 1924 — imitated and heightened oilskin benefits in a new way. It developed the first waterproof sealed zips in the early 1950s, then invented new knitted methods to birth layering systems and performance fleeces in 1960s.

Stormproof protective fabrics, survival suits for when it was a matter of life or death, and experiments in waterproof breathability would follow in the 1970s. Helly Tech — the brand’s response to breathable but waterproof GORE-TEX — would be the backbone of some classic creations that followed. Selling skiwear as well as sailing gear, the brand grew with quality as its selling point. Helly-Hansen’s muted performance knits were well-regarded base layers for anyone looking to take on the great outdoors, as its Lifa polypropylene — originally used for nappy linings —garments demonstrated superior moisture wicking abilities. 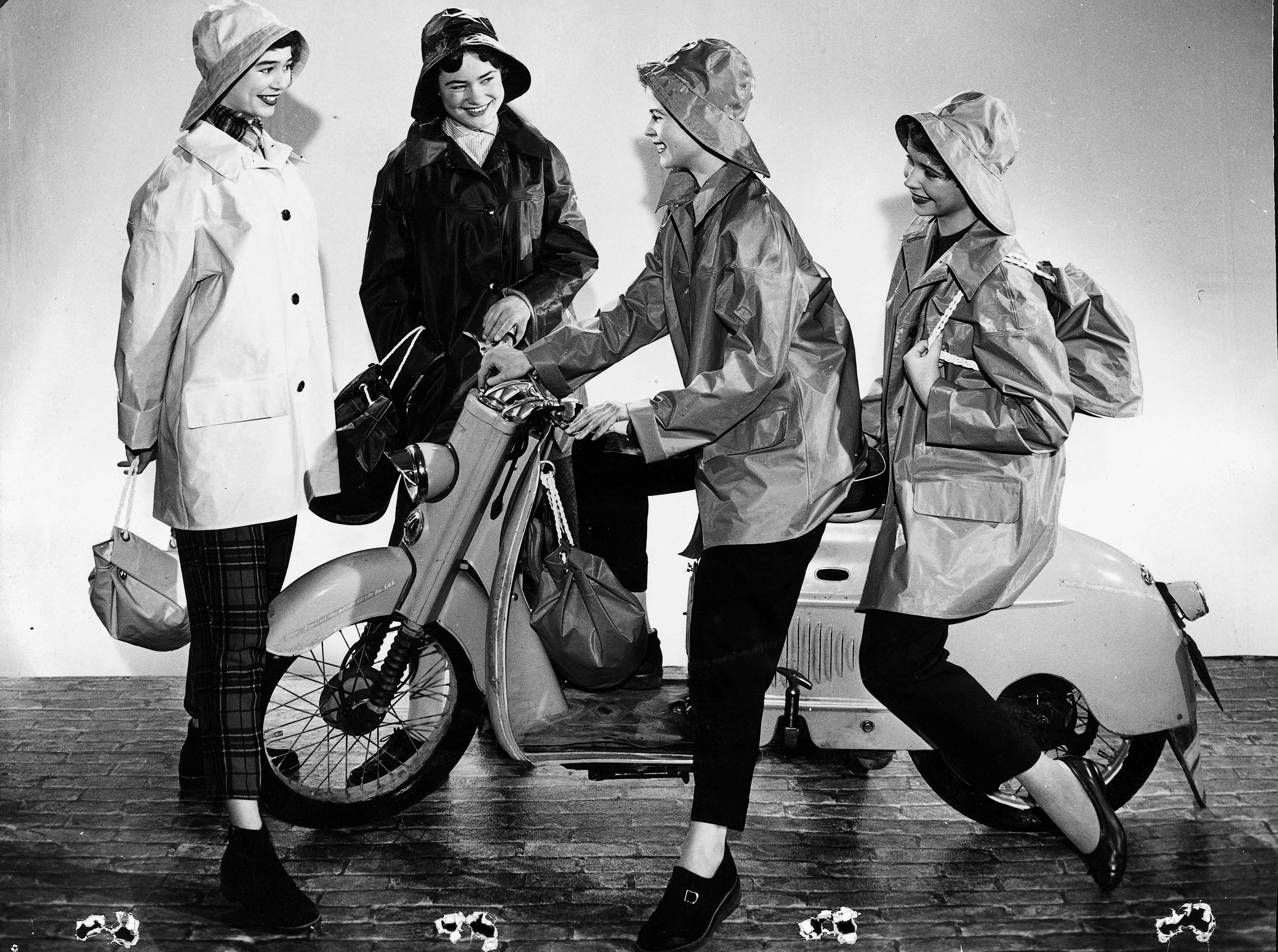 The first American Helly-Hansen store opened in 1981 and was located in Redmond, Washington. In 1983, the Japanese licence was acquired by Goldwin, the company responsible for the incredible Japan-only North Face Purple Label pieces and premium takes on Champion’s athletic archives. So far, so tasteful, right? Slowly expanding throughout the decade, the early 1990s would be a significant time of change for sailing gear. Skiwear had boomed as a fashion statement — like sailing, its participants had cash to blow and the market could match its performance benefits with ostentatious looks. By 1992, light, loose, colourful rainwear suits, with Velcro cuffs and statement looks had become the norm for competitive sailing, with Helly-Hansen supplying apparel to several America’s Cup crews.

Hip-hop’s dress code around the same time had an established appetite for outdoor gear with hefty price tags. Polo Sport’s pieces for wealthy skiers and snowboarders, The North Face’s extreme slope Steep-Tech pieces and reversible, bold Nautica — another big sailing brand — jackets could easily conquer the weather in an urban environment where freezing winds and rain were still an issue, but make a statement too via the branding and impossible-to-avoid colour blocking. It’s here that the fork in the road appeared for these high-end companies — embrace a nautical by nature hip-hop fashion boom or act as if it doesn’t exist. The majority took the latter route.

Helly-Hansen saw the benefits of directly targeting this market — with new publications like Vibe creating shoots and editorial at the same level as the established glossies, there seemed to be a new maturity and optimism within it. If you saw Wu-Tang members in Helly-Hansen circa 1994, it’s likely that it wasn’t by accident. Entrepreneur Steve Rifkind launched Loud Records in 1991, making it the eventual home to Wu-Tang Clan, Mobb Deep, Xzibit, Three 6 Mafia and Big Pun. He also pioneered the SRC street team concept that targeted influencers and an audience in a world that had conventional marketeers baffled — it was a model that would be popularised throughout the 1990s. 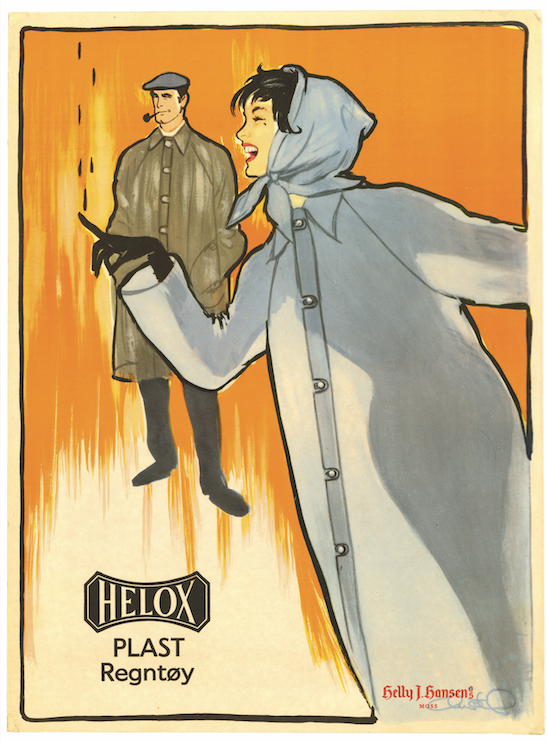 One of Rifkind’s early clients was Helly-Hansen (Starter, Le Coq Sportif, Converse and Tommy Hilfiger would later benefit from the network). Whether the brand had its buzz already with those in the know, or whether they specifically requested that they wanted Nautica’s share of the youth market remains open to debate, but the campaign would prove deeply effective. Late 1994’s ‘Nudder Brudders’ EP that introduced the world to a newly-signed Mobb’s seminal ‘Shook Ones Pt. II’ would feature a Loud-embroidered Helly-Hansen jacket on its cover. The brand even made special Loud branded coats for street team members, influencers and staffers.

An ensuing boom in Helly-Hansen pieces — particularly the stripe chested $150 Coastal Jacket — led to a lot of lyrical name checks. Some certainly weren’t accidental — records by Loud artists like Mobb Deep and the Cella Dwellas included mentions of the brand, but the jackets were everywhere. Slain legend Big L famously wore one (with fellow Harlem MC Vado making mention of that attire a few years back), and Helly-Hansen ads in magazines like The Source let the artists do the talking, incorporating ads for their forthcoming albums at the same time — Loud’s Sadat X and Dead Prez (just think about this one for moment — can you imagine a brand initially targeted at the whitest of the white co-signing a group with a name like Dead Prez in the era of social media outrage?), plus other acts like Erick Sermon’s Def Squad were showcased this way. It was overt, but it seemed legit and in this world, legitimacy was a key currency.

By 1995, Helly-Hansen was ubiquitous. It hadn’t neglected its core audience, but it made good money from its new fans. In the UK, jungle’s club style embraced the bold Hilfiger and Helly-Hansen outerwear which, while costly, didn’t require too much of a treasure hunt to track down. In the north of England, where waterproof outerwear oneupmanship is pretty much a way of life, it wasn’t surprising to see fancy cagoule-culture pick up on the same jackets that were must-haves on the other side of the Atlantic. Meanwhile, back in America, Helly-Hansen began expanding around 1997 with a rollout of licensed stores in malls next to fashion brands. 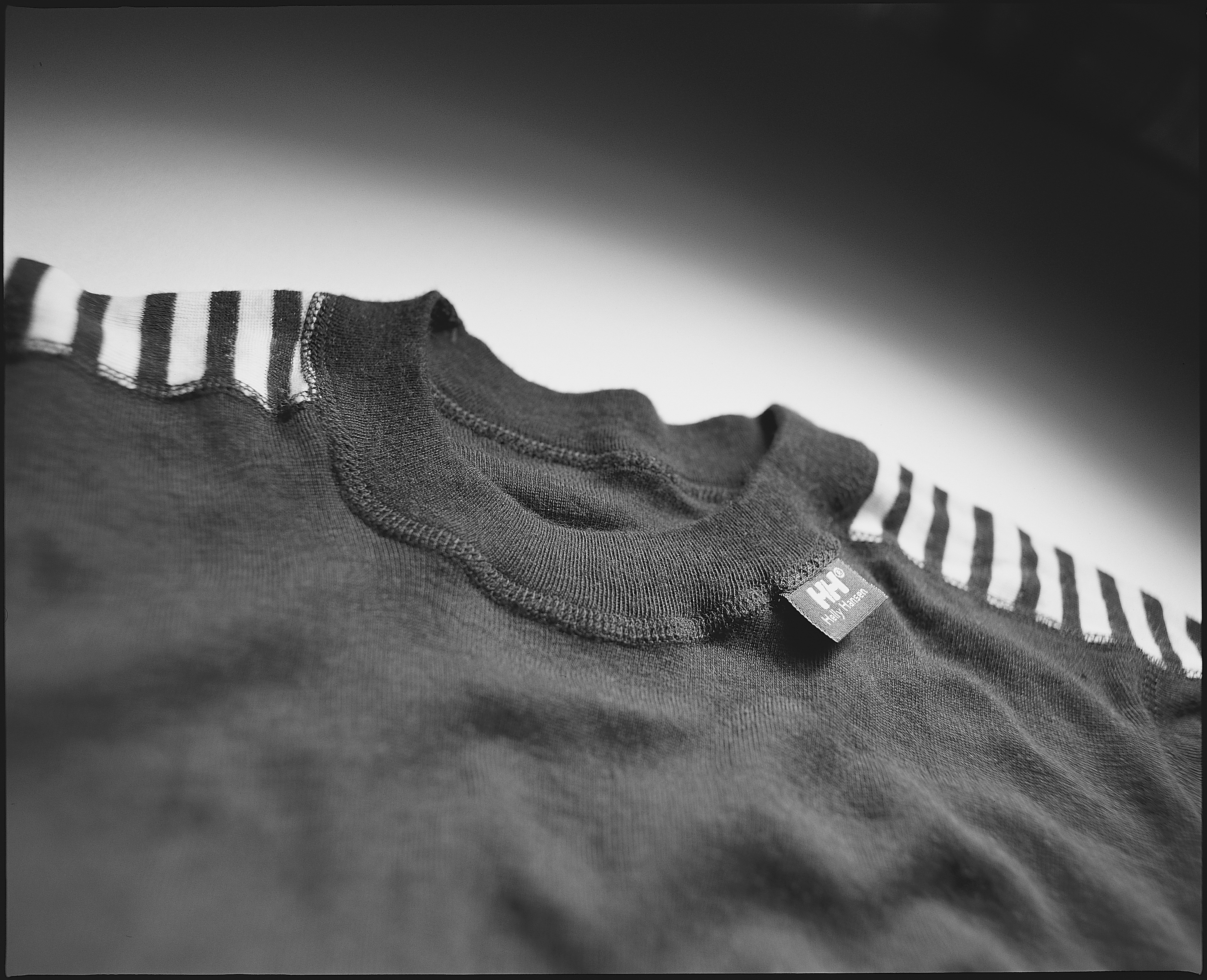 But all crazes must pass. Popularity at hype level is only temporary, and while these coats became easier to obtain than ever, that inventory began to sit and the business suffered by 2000. That the brand had gone from a brag to a punchline in 1999 when Junior M.A.F.I.A. affiliate  Mr Bristal rapped that his opponents, “come fast, went out like Helly-Hansen” indicated that a significant shift had occurred. It had to weather the storm, but the brand continued to create for its original consumers too — designs like the Sequel Jacket, illuminNITE reflective technology and expedition sponsorships stayed true to Hansen’s vision.

By the 2000s, Helly-Hansen had implemented a business model that could still sell top-tier tech to performance accounts, but stock affordable basics to accounts like JD Sports. It launched shoes for the first time in 2004 and honed its bestselling base layers. 2007 would also be the year it seemed to return to streetwear by dipping into the burgeoning hype and blog culture with its well-packaged Love project that included a New Era cap made from proprietary Helly Tech fabric with a stitch pattern inspired by genius architect, inventor and theorist Buckminister Fuller’s Geometric Dome concept. After a cap sent as promo plus tradeshow talk of a tee and hoodies, the Love project seemed to come to a halt.

In 2012, the more costly Helly-Hansen parkas had become an object-of-desire for a younger generation in Washington D.C. where local crazes in rugged weatherproof gear have always bloomed with little to no explanation beyond an appetite for covetable protection. In the UK, it would be scene veteran Skepta, enjoying a new stylistic freedom, opting to wear the low-priced, half-zip Roan Anorak in the video for Fekky’s ‘Way Too Much’ and a blacked-out HH design for his verse on Devlin’s ’50 Grand’ that re-upped interest in the simpler stuff as part of his influential blend of higher-end streetwear and high street pieces. In Tokyo, the Goldwin-helmed version of Helly-Hansen rolls out some remarkable Japan-only coats using the company’s technology. Additionally, while maintaining its own elite sailing, ski and outdoor teams, Helly-Hansen has its own professional program with its own pro store club, complete with a strict membership process. 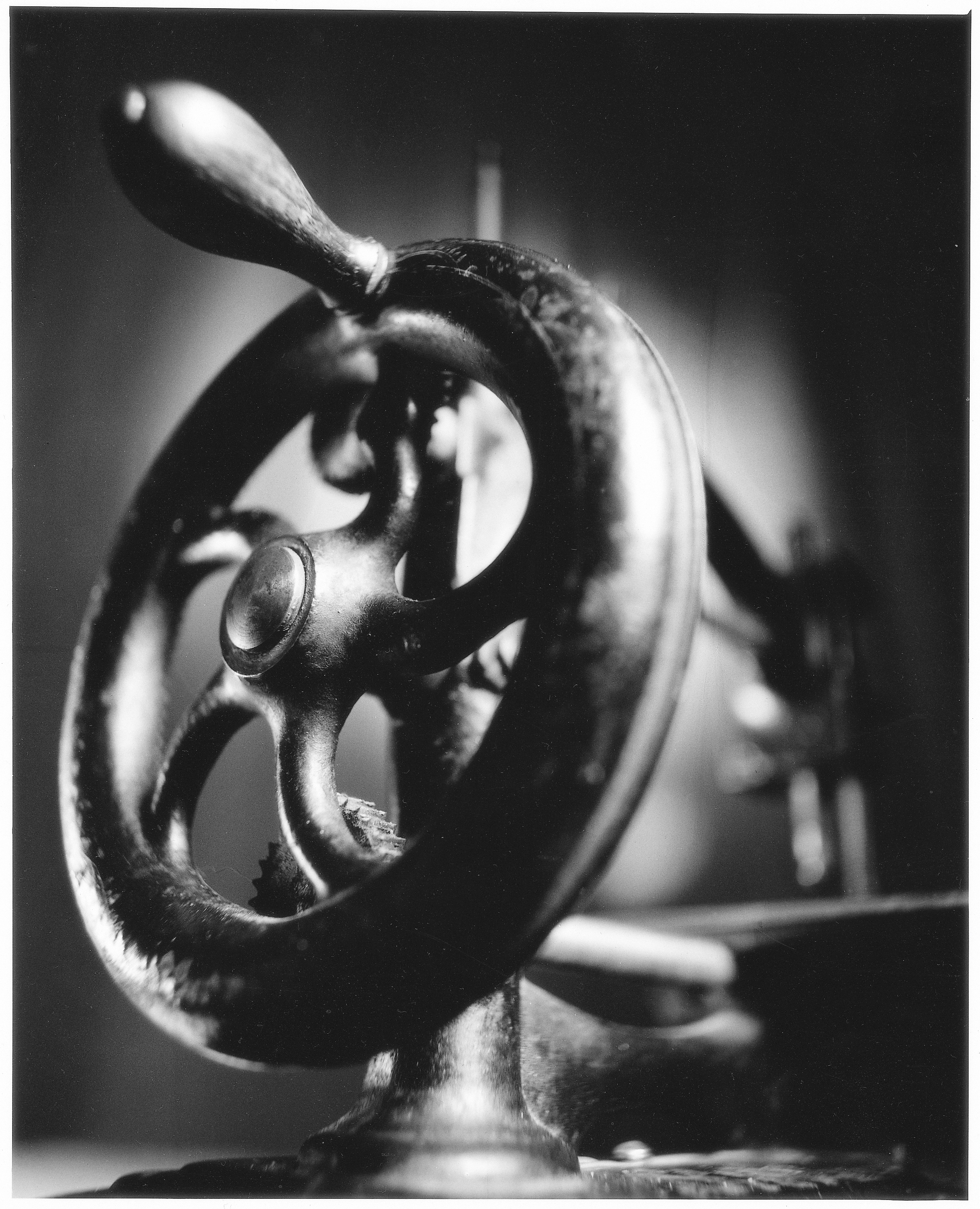 As one of the only outdoor brands to ever acknowledge the audience picking up its pieces, Helly-Hansen’s SRC-assisted experiment in marketing remains an important moment in branding the seemingly unlikely to a fickle hip-hop crowd — a moment when the sea met city style in Norway via NYC. This was a craze that travelled on record sleeves, over the radio and in the pages of periodicals, a decade before blogs were even part of the plan. After all, isn’t the role of the explorer to venture into uncharted territory? Nobody ever said that the journey wouldn’t be treacherous.

The latest collection from Helly Hansen has landed online and in selected size? stores now; you can see our latest selection here. 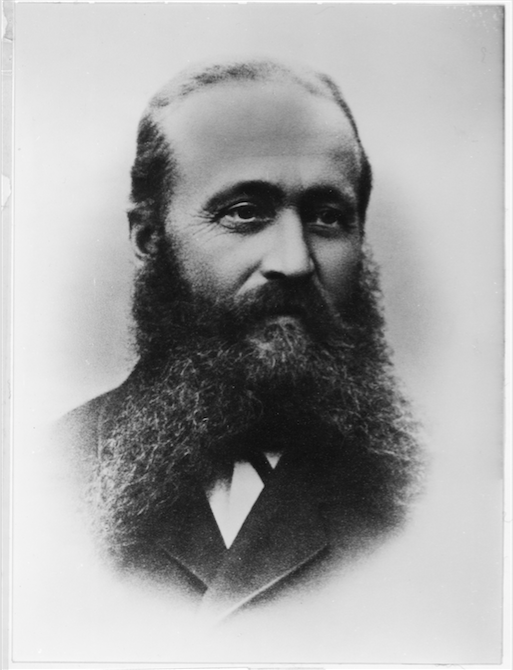