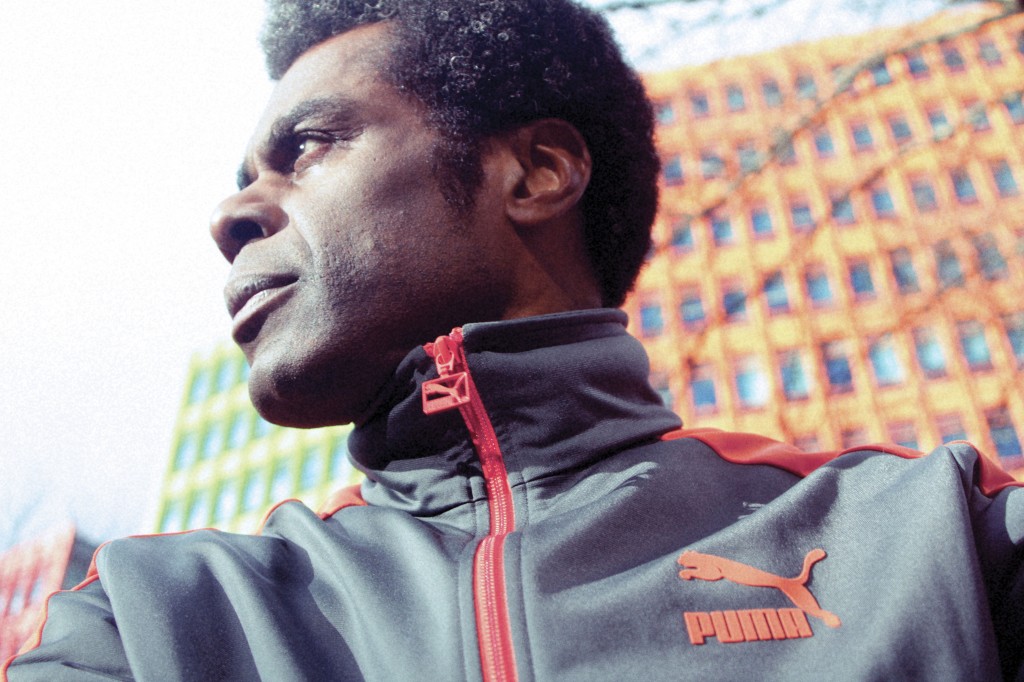 I went to New York in 1985, for just under two weeks and managed to get my hands on a pair of PUMA States in navy blue. These ones were buff. The original sneaker. I had to walk all over Manhattan to find them but when I did I was like woaahh!

We were on the D-train going back to Brooklyn, I had my feet out in front of me and these three guys came walking up the subway train and one of them stepped on my foot! I was speechless. I’d just seen my brand new shoes that I’d trekked and sweated for, totally dusted. Can you imagine that on YOUR foot? I didn’t know what to say and to be honest, I was pretty scared! My friend Vince shouted “Yo man! What you doing?”, whilst sitting really calmly in his seat. The stranger gave a look as if to say ‘who do you think you are?’ Vince then said ‘Do you know who I am? Do you know Midwood Street?’ Apparently it was an areawith a lot of respect in Prospect Park in Brooklyn. Instantly he cried “Man I’m sorry!” and Vince retaliated “Sorry ain’t good enough!”

The atmosphere was very tense. Vince then pointed to his own jacket and encouraged the stranger to reach towards his inside pocket. At the time Vince had just finished work and was wearing a suit. Vince shouted “I might look like a stiff from Manhattan but I’m down you know.” Then it crossed my mind that Vince might have a gun or a knife. But surprisingly the hoodlum slowly reached into Vince’s pocket and to my surprise he pulled out a small PUMA brush! Out of respect, he crouched on his knees and brushed my suede back to new. And that my friend is my initiation into the world of the PUMA States. I felt part of a generation when I stepped out in my PUMA’s.

Before I knew it I was jumping in front of the cameras as a TV presenter, right at the forefront representing the UK style and culture. 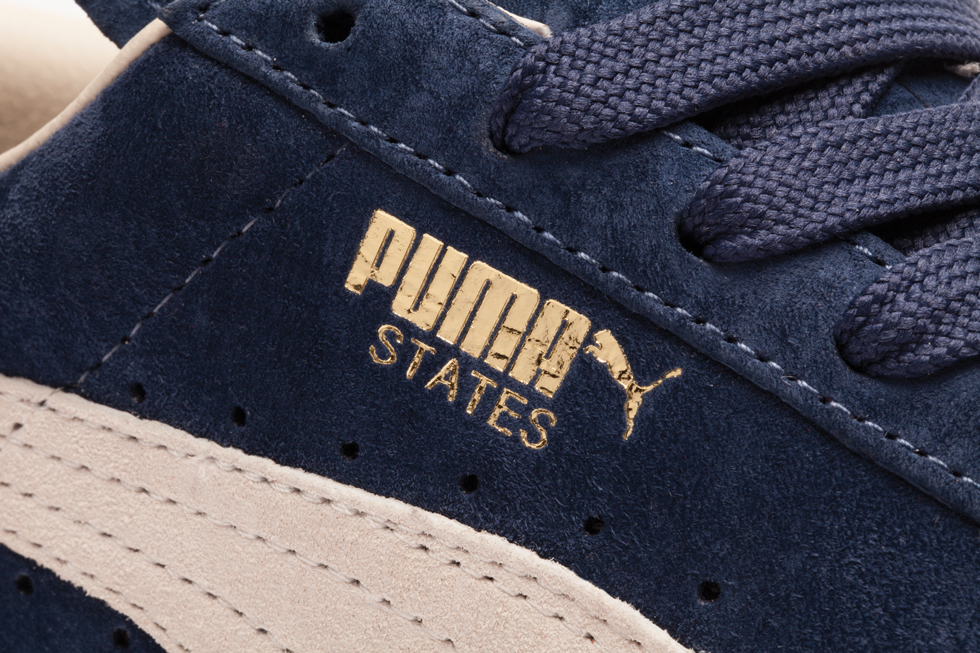 My name is Normski and I just do being Normski to be honest. I originally started off being Norman Anderson but from about the age of 18, when I first became a professional photographer and was getting credits in magazines as Norman Anthony Anderson, it just seemed a little bit too long. When I was in New York City in 1987, I remember buying a name belt from 8th Street St Mark and the name Norman didn’t look too good, so I had to think quick on my feet and came up with the name Normski, which is actually adapted from the Normski who was in the Rock Steady Crew. I didn’t know at the time – so yeah that’s who I am!

I do quite a lot of stuff; photography was my first profession. I studied in college and I’ve always been involved in the music industry. I also use to play the drums but I made a conscious decision that I was going to become a professional photographer and only do music as a hobby.

Quite a few years down the line, I managed to land a job doing TV presenting, which kind of came out of the whole style photography thing. Being a predominately hip-hop music photographer in the mid to late 80s, there was a massive call to music and stylistic energy. I was definitely in the middle of it at that time and it was a massive change from the casual’s scene in London. I was always open minded and part of the hippy side of things. I wasn’t really into football or basketball. I think I was quite Americanised, but I think that’s because my family are originally Jamaican. 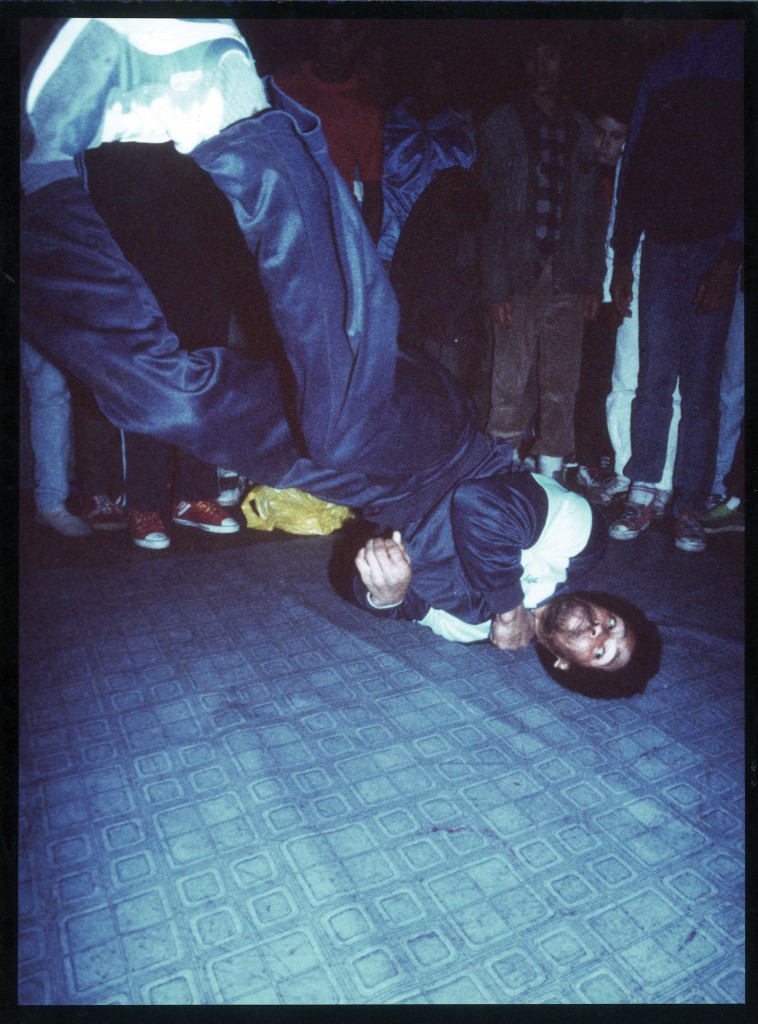 I’ve always had a kind of worldly outlook on everything and I did a lot of photography for quite a while. I started at 13 but it was more as a hobby and then studied it for a year. By the time I was 15 I had moved on to be a studio assistant at Holborn and Camden studios. I quickly began doing live music photography, jazz gigs, R&B sort of stuff, Motown: Stevie Wonder, Tina Turner, Barry White, Whitney Houston and Miles Davies. I started doing pop stuff too with a lot of the more popular magazines at the time – Smash Hits, Number One and Record Mirror was a big one for me. The main target that I was aiming to be in was The Face which was biggest style magazine at the time. You had to be the next generation up from me to be working for The Face so I was shunted to the right and ended up doing style photography for i-D magazine and was the main photographer for the UK bible Hip-Hop Connection. I was given regular shoots, again most of the music and street stuff, the latter being my forte.

Everything was moving very quickly. Photography was black and white in 1985 but by 1989 it was in full blast colour. You knew America and hip-hop had arrived in the UK. In my time working and assisting in studios, I realised very quickly that I did not want to be a studio photographer. I can do all that stuff but it just doesn’t turn me on.

I think it’s because I like to be an ‘out and about’ guy. So that’s kind of how I got my recognition for being the main hip-hop photographer – because I took to the streets and the culture and there were not many people shooting hip-hop. 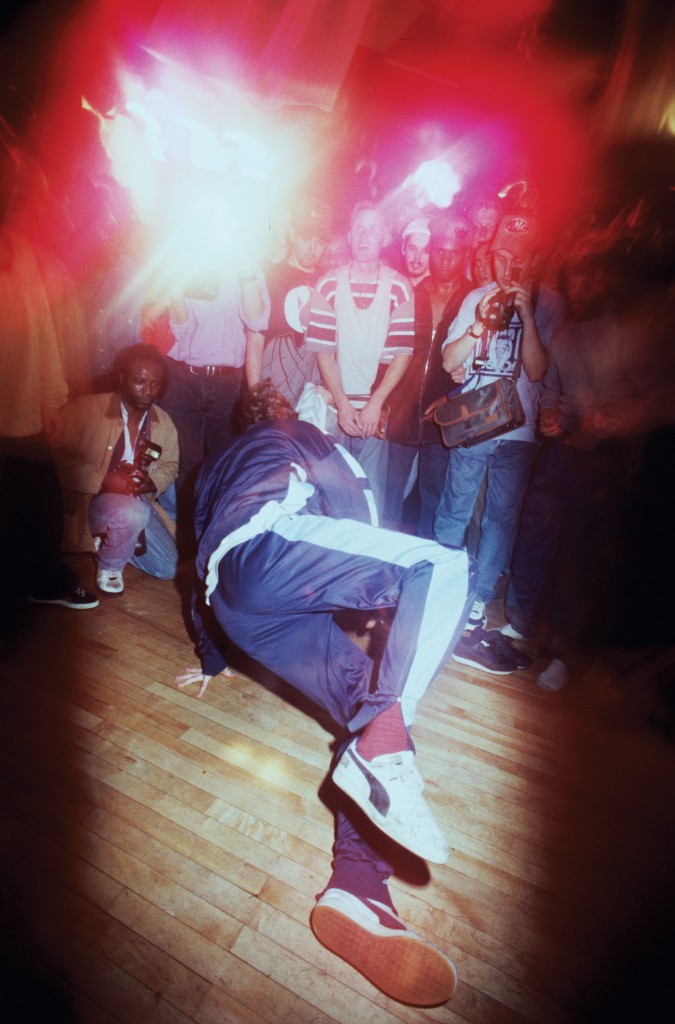 UK Breakdancer at a hip-hop jam in a club in Leicester Square, London, late 1980’s © Normski

I’ve always shot on film. When I was younger I use to always be developing film in my cupboard. Whilst my mates were out chasing girls, I did a course and was spending all my money on developer and fixer. For most of my life I’ve spent a lot of my time like some kind of nocturnal character in the dark. Even at gigs I didn’t have a flash, I couldn’t afford it and it’s not a good look so I learnt really quickly how to do high speed photography. I had to photograph a lot of black artists, and to expose people of colour is a lot different to exposing people who are lighter. Its quite a skill to be able to do that. These are skills you have to learn so when the whole hip-hop scene came up I was kind of primed for it.

I’ve always been inspired by the greats such as know Henri Cartier-Bresson and David Bailey. There’s a lot of 60s black and white photographers who I used to really admire. Don McCullin is famous for being the war photographer who photographed the people in Vietnam. It’s the passion for wanting to document what’s happening around you. You become so involved; you become part of what’s happening. You’re not really a photographer anymore.

Over the years, I’ve taken so many hundreds and hundreds of photographs in so many circumstances that it’s hard to choose my favourite. My archive is really focused on the UK’s early hip-hop days and in particular the ‘American invasion’ which has completely inspired my views on street credibility and street style.

In 1988 I did a promotional shoot with Hijack, a highly respected south London hip-hop crew, signed to Music Is Life records. It was shot in high contrast black and white – I really sort of like that style in printing as it takes me back to when I was young with rebel groups like The Clash or The Stranglers. One of the guys was even wearing PUMA’s in that. I also photographed the Demon Boyz at Broadwater Farm Estate where there were riots. I took them down onto the disused railway tracks in Chalk Farm and the photographs we took were all hand printed black and white, no clever special effects needed. Sometimes it’s not just about big name artists, even though a lot of my greatest shots were of the American artists that came to the UK. It was more a case as everyone tells me now, that ‘you were there and its history’. 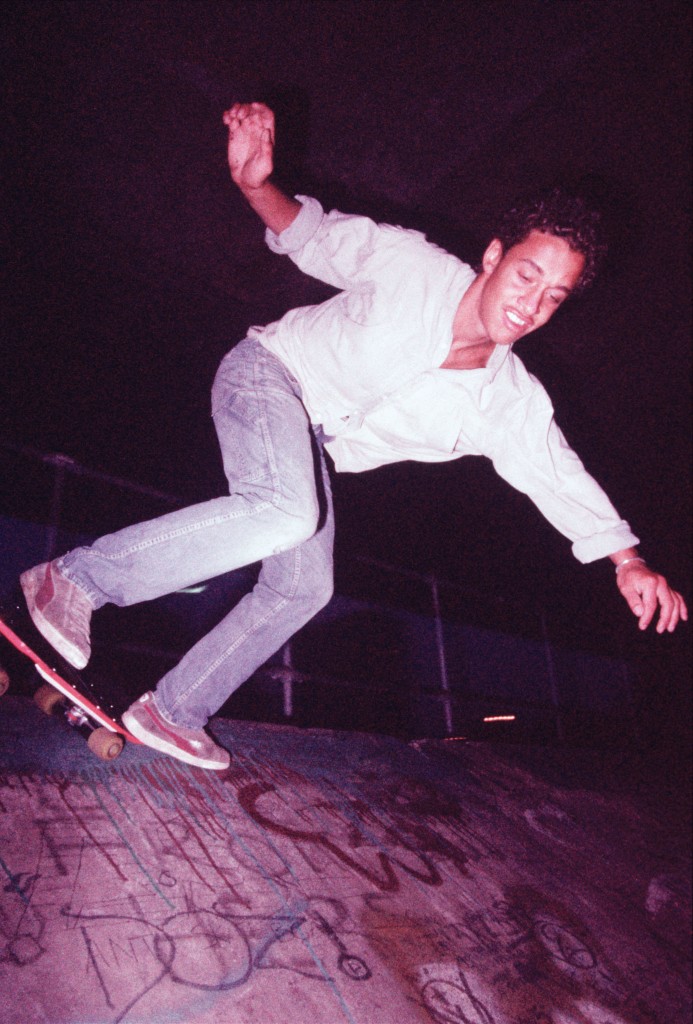 My good friend Zak Ove. The first person I saw with a pair of PUMA. Skating at Meanwhile 2 half pipe, West London, 1986 © Normski

It has always been about the music for me. When you saw the Rock Steady Crew doing their signature moves; such as the windmill, they were always killing it in their PUMA’s! In those days, brands were all about associating with an animal of some kind. I mean, everyone had an animal name but none as slick as the 4 letter word: PUMA.

When you bought a pair of PUMA’s, it was always at the back of your mind, how could you make your PUMA’s better? A PUMA shoe is a shoe that you put your fat lace through, right? But there wasn’t such a thing as a fat lace before PUMA. Someone must have decided; I’m going to put a double lace. In fact when I first went to America, kids used to wear a size too big to make their feet look bigger. They’d take the laces out and iron them, crucial to making them really flat grids of lace. It was just the style, its mad, its messed up.

My favourite pair of PUMA’s that I’ve ever owned were my first pair which were navy blue, first generation PUMA States which I got in New York. I bought them with a pair of fat checkered laces, white and blue, really fine, crisscross weave. Every time I put my foot in them, I’m like ‘ohhh these are like my big boy slippers!’ 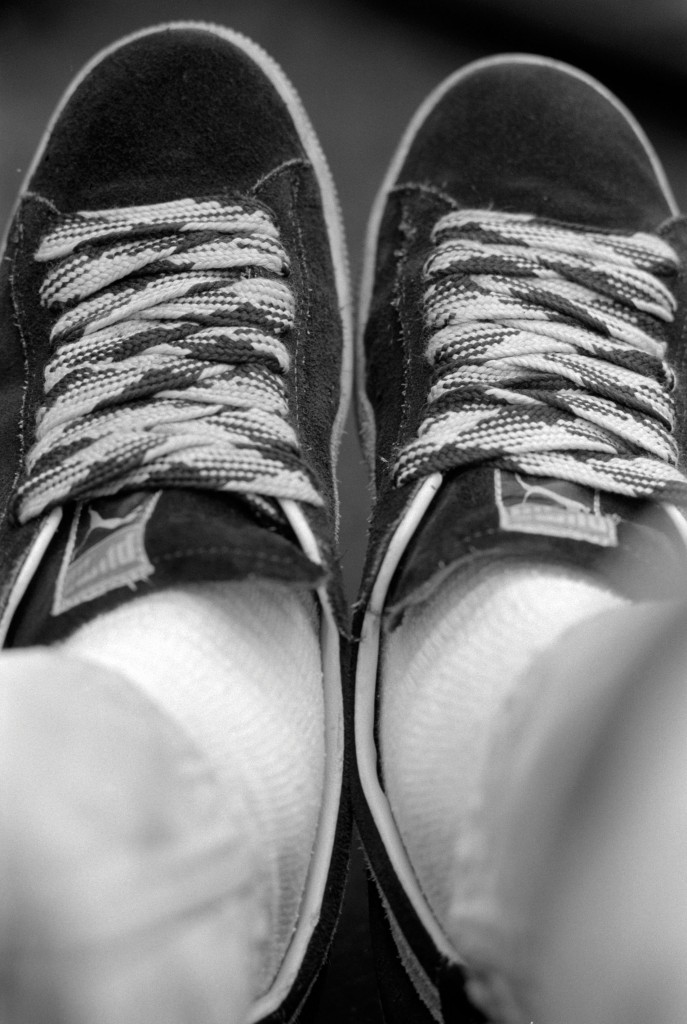 PUMA States are not just for break-dancers and b-boys in the UK. PUMA States are like big special sneakers that everyone wears. They are really special and the UK recognised that by making them much more individual as an independent application of style. We’ve got so many more forms of expression with how we dress in the UK. If you go from the top of the UK right down to the south, we’ve definitely got more styles than any other country in the world. I don’t care what anybody says, I think the UK does have a very individual take on style and how we are able to match a pair of Suede’s with whatever we feel like….I mean I’ve done it! There have been times when I’ve worn a bad-ass suit and I’ve got my States on, going to an awards event. It wasn’t one of those American suits; more like a quality tailored Saville Row suit, with a gold bit here, a gold watch there and not forgetting my big daddy cane! I don’t mess about and that’s the thing; I don’t look American.

Street style photography is my thing and to be honest it’s not really so much ‘street style’ photography. I think it’s just the fact that a lot of my photography has taken place on the street and revolves around stylish and real people. Four of my photographs of young British youth hip-hop artists are a permanent part of the archive at the Victoria and Albert Museum, as well as two more photographs; one of my mum and dad, in their work clothes and another photograph of a black policeman. It was all part of an ongoing project in the black culture archive the BCA, so yeah damn straight Normski’s photography has played a big part in the cultural street style.

The PUMA States in red/white, forrest/white and navy/white will be launching on Friday 14th March online at 8.00am GMT via direct links on our Facebook, Twitter and a dedicated e-mail newsletter. It will also be available in all size? stores on the day (from their respective opening hours) priced at £60. 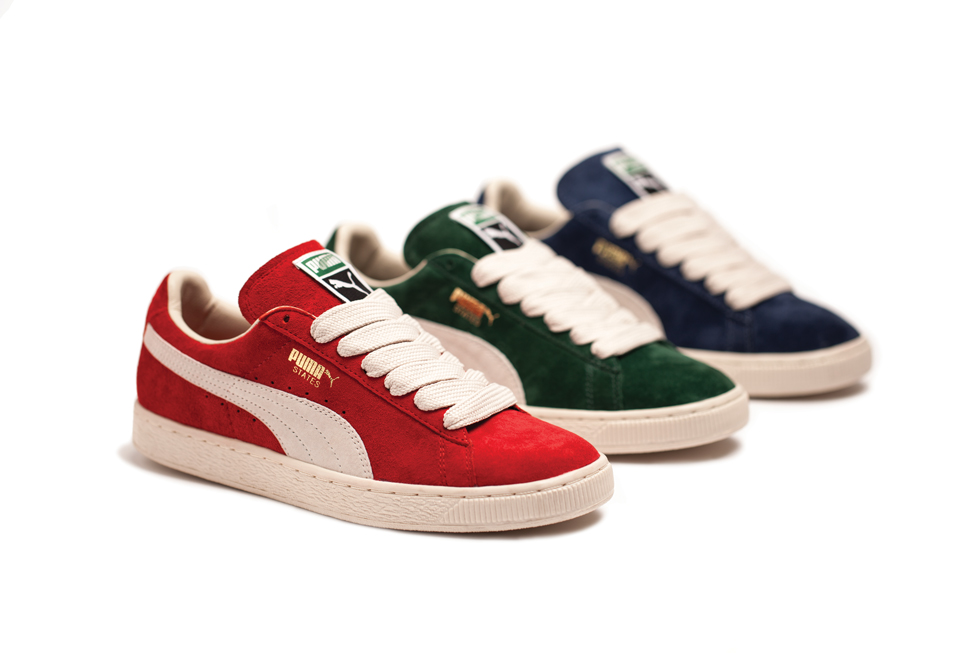