0 to 100: The Best Sneakers Inspired by Sports Car via Nice Kicks

In celebration of this weekends release of the Air Jordan 14 'Ferrari', Nice Kicks have compiled a list of their favourite sports car inspired trainers. Find some of our favourites below.. DMC-12 x Nike 6.0 “DeLorean Dunk” Inspiration: DeLorean DMC-12 The DeLorean from Back to the Future might be the fastest car to inspire a sneaker, as it was fast enough for time travel. Doc Brown’s automobile inspired a pair of Nike SB Dunk Lows that featured a metallic silver upper with the car’s DMC tag on the heels and its unique taillight design on the outsole. These made a Quickstrike release in 2010 as a prelude to the Nike Air Mag‘s first release the following year. Air Jordan XIV Inspiration: Ferrari 550 Maranello The Air Jordan XIV was one of the few sneakers in the Air Jordan series that was inspired by a specific car. In detail, Jordan’s Ferrari 550 Maranello was the focal point of this Tinker Hatfield/Mark Smith. Released during the 1998-1999 NBA season, this shoe owned a number of Ferrari-inspired attributes such as the Ferrari shield-esque Jumpman logo, a tread-like pattern at the heel and an air-intake vent on the medial side of the midsole. 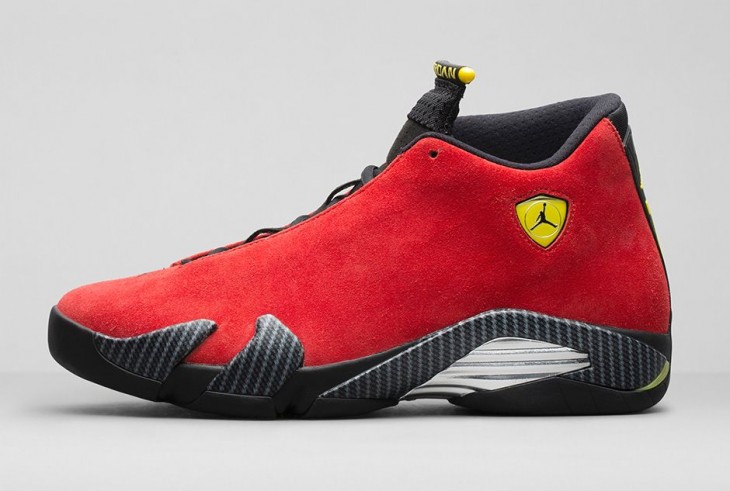 Nike LeBron 11 Inspiration: Lamborghini Egoista Mostly kept under wraps, LeBron James’ signature sneaker last season was inspired by a sports car, as designers drew indirect inspiration from the Lamborghini Egoista. The angular design of the Nike LeBron 11 resembles the build of the one-of-one Lambo, which is color blocked similarly to the “Forging Iron” colorway that is seen above. McLaren x ASICS Inspiration: McLaren Racing In the early ’90s, the McLaren Racing Team connected with ASICS to produce a trio of collaborative kicks that were only made for the pit crew. The sportiest of the sports cars on this list, the McLaren x ASICS collaborations came in three different all-red makeups with team tags in white. You can view the rest of the list over on Nice Kicks here. [Source: Nice Kicks]