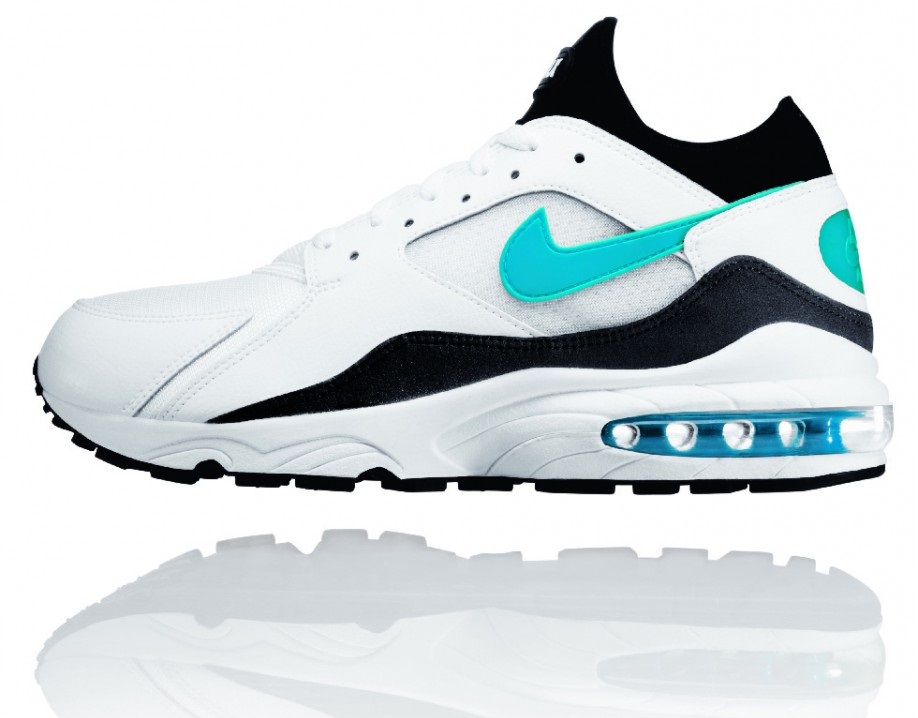 We all get jaded eventually, but in 2013; the amount of thirty somethings who feel like the 1993 to 1994 period was the lock-off for everything is at pandemic levels. On December 31st, 1994 it seems that the automated barriers came down, hermetically sealing them from what came next. New music? They don't need it, because nothing sounds as good as the Wu-Tang Clan, Akinyele, Beatnuts, Souls of Mischief, Tribe Called Quest, Notorious B.I.G, De La Soul and Nas albums they clutch to their chests. With nostalgia comes revisionist history — everything that's 20 plus years old seems to become a masterpiece, even if 70% of 1993 and 1994’s hip-hop albums were just repetitive filler around a couple of good singles. Contrary to revisionist history, a lot of hip-hop was terrible back then — wiggedy-diggety-Das EFX clones, post-Chronic G-funk lite, Pete Rock and Muggs imitations with weaker horns and the rise of the grimy style that copied Onyx (themselves a former dance troupe turned goon act) were prevalent. In 2013, a new release sounding like it was made 20 years ago is nothing to be particularly proud of —that's rap's equivalent of Status Quo fans, with a tattered Tommy Boy jacket replacing the sleeveless denim vest. A regressive tribute act pretending to be from an NYC months before Guiliani took over is not cause for celebration. If you were old enough to be there, you'll know that magazines (The Source pre-1994 fall off— who highlighted the Air Max 93 as a shoe of the season — plus Big Brother, Dirt and Phat) reached a peak of brilliance then, album and single artwork were better and sports footwear was incredible. Those shoes have never been bettered. To gaze at sports store shelves in 1993 was to see the definitive selection of runners, basketball, trail and training designs. Tennis shoes seemed to have peaked a couple of years prior but we still had the world at our feet right there. Independents and chains were plentiful, even in provincial locations, with the newness alongside the shoes showcased as part of an interest in all things "old school" (yup, people were nostalgic in the year that people get nostalgic for), Sambas, Superstars, Suedes, Dr Js and — if you knew the import spot on UK shores  —  AF1s and Cortez were creeping through, but that fetish for elderly shoes ran parallel to a slew of innovative designs. We had the best of both worlds right there. Retro was done right back then, just as CGI came correct in Jurassic Park — what it opened the floodgates for was the problem. But the new stuff? ACG had hit a sweet spot with sequels to old favourites like the Mowabb and Revaderchi that boasted more wrong-yet-right colourways, plus the Air Escape and pun-led Air Azona. The Pegasus line had new chapters and Racer spinoffs, the Mariah was still around, the eighth Jordan was polarisingly weird, but looked sensible next to the second attack of the Air Raid that had faux wood on the sole and the bizarre looks of the Air Carnivore training shoe (which, according to lore, was based on a shoe called the Air Dino that was made for Jurassic Park dinosaur actors to wear during motion capture). Notably, for all the oddities, it was the relatively conservative (but well-priced) Air Magnum Force that was a basketball bestseller that year as well as Seinfeld-friendly sensible creations like the Driving Force Mid. 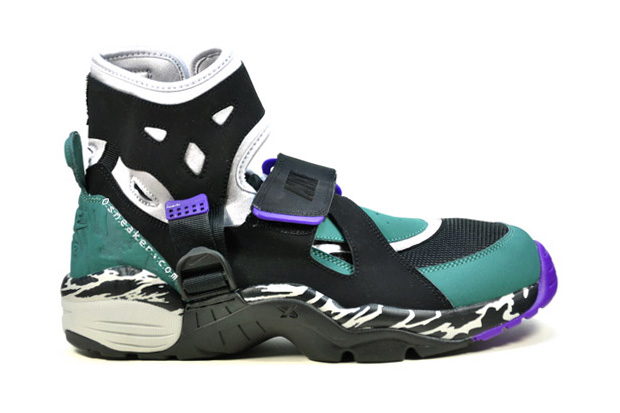 Then there was the Nike Air Max from that year. What's most intriguing about the Nike Air Max 93 is just how good a job Nike did of tethering the strangeness of the year's designs to create a shoe that's an easy wear. Historically, the Air Max 93 hasn't had the mass appeal of the Air Max 1, Air Max 90 or Air Max 95 as a reissue. It has a diehard following who've scooped up those retros and it was part of 2006's History of Air celebrations, but it seemed to be left in the shade a little. There's no good reason for that either, because this edition of the Air Max series offered the most revolutionary moment in visible technology since the first part dropped, with an innovation that echoes in modern footwear design. Decreasing the midsole casing at the rear for 270 degrees of Air Max took that bubble concept and maximised it with a 35% increase. Bearing air so vast that luddites backed off for fear that it might pop beneath them, the Nike Air Max 93 looked dramatic on display. 1991 seemed to be a boom time for the Air Max, with the Big Window BW edition and Air 180 building on the franchise. 1992 offered the Air Max ST, with its stability emphasis, but despite the BW’s Air Max IV nickname, as far as a definitive annual take on the technology, the aim seemed to be to create a franchise rather than ground-breaking chapters. The Air Max V (aka. the Air Max 93) was a statement shoe to push things forward with something more than just a variation of what had gone before. The 180 system's disappearance from the line was interesting but the new blow moulded air unit was superior in both its capacity and cushioning. 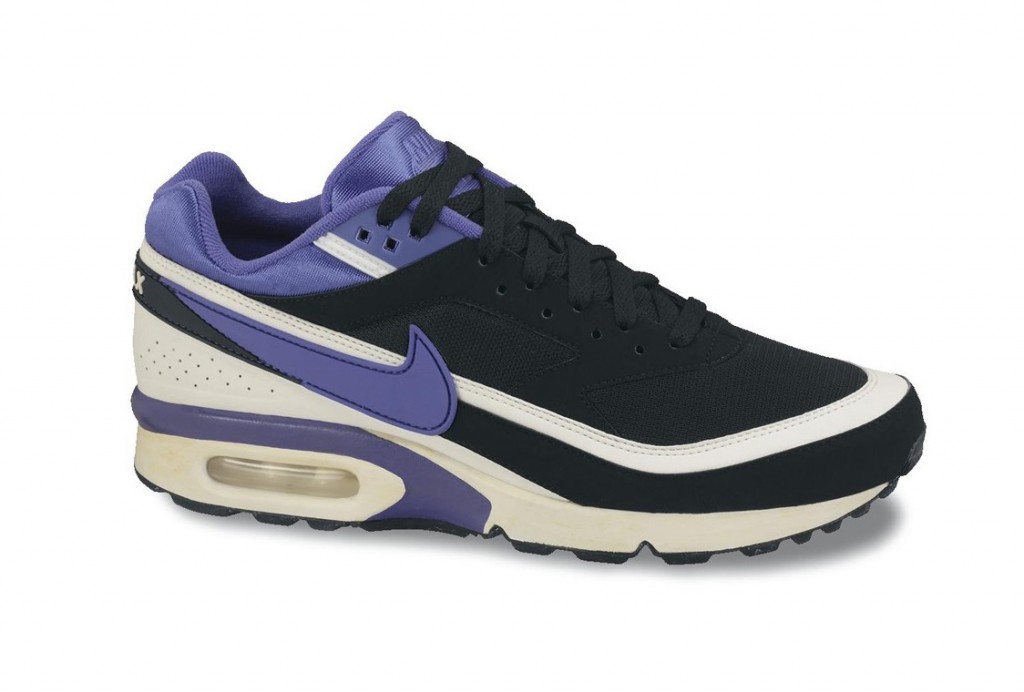 Sat alongside former incarnations like the BW (sold in 1993 as the Air Max Classic and pushed as the shoe for flexibility) and the ST (sold that year as the stable running choice) as well as the Huarache, the 93 was a flagship release that got all the catalogue inches. Made for training, the Dynamic-Fit neoprene and stretch Meshlar sleeve that riffed on the Huarache and Mowabb (both Tinker Hatfield creations) with sock-like fit was a totally new shape for the series. Nylon and synthetic leather on the upper, articulated panelling, max volume Air-Sole with a separate flexible forefoot unit, V-Flex grooves on the outsole, plus a semi-curve last meant that these were sold as a serious proposition with a near £90 price tag to match. Previous Air Max models defined what the foot would look like, but the 93 worked with the wearer’s feet for a more natural look (well, as natural as an object with a massive air bubble and neon accents could look). Back then, any significant drop needed an athlete as a face —  Quincy Watts, fresh from a duo of gold glories in the previous summer’s Olympic Games was the perfect frontman for the this one. http://youtu.be/5rIbDHQYWOs Colours have always been as integral to the Air Max line as the technology, and to set it off, the White, Menthol and Black seemed to echo a 1991 Air Max 90 colourway, while the women's White, Laser Lime and Royal Blue would hark back to a women's 180 makeup. Still, those accent colours encapsulated within the Air-Sole made all the difference. All in all, there would only ever be around five original Air Max colourways between 1993 and 1994 in a collection that was capped by the Baby Max, which took down the men’s colourway but sadly, omitted a tiny takedown of the improved air technology. That Tinker Hatfield worked with Bruce Kilgore (which means that the man responsible for sock-like breakthroughs like the Flow teamed with the man who designed the Air Max) on the Nike Air Max 93 explains a great deal about the shoe's aesthetic. Though Kilgore's contribution was largely Air-Sole based, Tinker still cites the 93 as a personal favourite of the line for its performance emphasis and, “lyrical design”. Nike engineer Parry Auger and air bubble genius David Forland were all essential to the shoe’s genesis too. The 93 would also mark the end of Tinker’s Air Max design streak as he began to step down to let designers like Sergio Lozano take the reins. Hatfield’s presence is in the Air Max 94, but even he’d concede that he wasn’t pushing the envelope on Air Max by that point. The Max Volume unit would make an appearance in the Charles Barkley endorsed Air Force Max basketball design and the Air Trainer Max cross training shoe in 1993. Real runners seemed intrigued, yet the Air Max 93 never seems to crop up in imagery of the era from a subcultural level (though it made an unexpected appearance in a Range Rover print ad) as much as previous instalments. While price has never put off the show offs, perhaps the sheer volume of strong shoe designs on the market might explain that lack of visibility despite Nike's emphasis on more visibility than ever before. 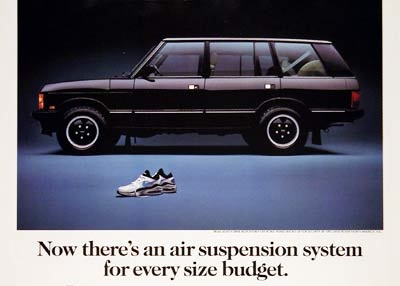 By early 1994, Air Max 93 would exit retailers, with the Max Volume present in the more conventional looks of the aforementioned Air Max 94 (a mild disappointment which dropped in more colourways than the 93 ever did) — followed by the similar Air Max Burst in 1995 for folks who couldn’t afford the 95. The greatest shoe beyond the Barkley or 93 to showcase a 270 unit was actually 1995’s barely-seen Air Max Racer, but that model remains an obscure experiment in turning the visible air DNA or the time into a more streamlined, lighter style. 1994’s true 1994 Air Max moment was, unofficially, the Air Max2, with an amplified approach to air, a new shaped Air-Sole unit, an evolved take on the Dynamic-Fit and a teal colourway that makes it an underrated entry in the Air Max line, accompanied by the simpler Air Max2 Light design (a dry run for the technology that would follow). In 1995, Sergio Lozano's Air Max 95 —  a thing of beauty but hardly a form fitting creation — would push things forward again in terms of visibility and capacity to finally expose the forefoot air. The 2003 tenth anniversary reintroduction of the Air Max 93 meant some beautiful neutral editions as well as some knowing nods to an underrated Escape makeup and the Mowabb (prior to that model’s rerelease) but still, all eyes seemed to be on excellent editions of the Air Max 1 and 90 that arrived at a similar time. While there's a multitude of Air Max shoes, development costs mean there's significantly less different air units (for instance, the Air Max 97 shares the Air Max 2003's sole unit and the bestselling Air Max LTD from 2002 would carry the Air Max 93 unit). The Air Max 93 takes its place as an Air Max breakthrough in terms of innovation, performance and a certain simplicity that makes it ageless. It's the sum total of the early 1990’s era of breakthroughs in fit, but it took the challenge to maximise cushioning seriously and set its own standards. 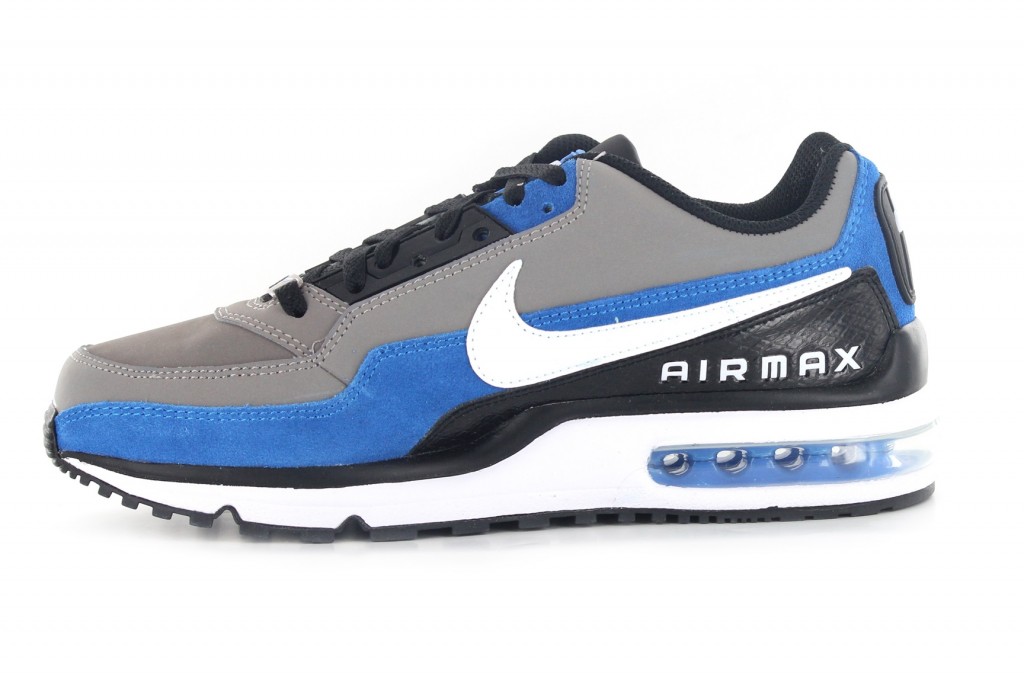 After 20-year stretch, the Max with the stretch sleeve still feels fresh and it still looks like a break from the norm, even in a retro drenched marketplace. This is a pivotal shoe moment that's a highlight from a year of standouts. That’s something worth celebrating. So when that old bore starts banging on about some mythical-sounding boom-bap era of two decades gone and moaning that Drake can’t rap, feel free to ignore them. But when they tell you that shoes were better back then, they're right. The sports shop of 1993 was a Valhalla for anybody who loved running silhouettes. Here’s to 20 more birthdays for the shoe that maximised the Max.